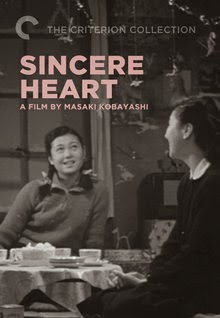 If you're ever in the mood for a predictable but heartfelt (and superbly class conscious) Japanese melodrama about doomed love and the destructive absurdity of emotional repression, this is the weepiest thing you're likely to find that isn't actually about children starving to death in World War II. 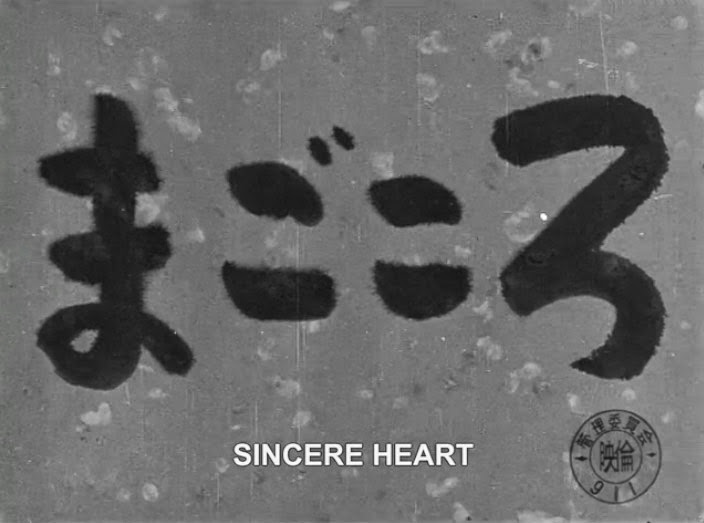 In the introduction to this series, we discussed what amounted to a test run for a 28 year old Masaki Kobayashi.  This was his short film My Sons' Youth; it was adequately successful in achieving its (very) modest goals.

It's 1953 now, Kobayashi's a year older.  He's still in the thrall of his mentor, Keisuke Kinoshita, and it shows—Sincere Heart is a dedicated tearjerker.  But this, Kobayashi's first feature-length motion picture, is instantly recognizable as his own.  For the moment, let's put aside the fact that Kobayashi's technical prowess and his unique compositional style are beginning to show in earnest.  Taken as a narrative, this is what you'd expect from a Kobayashi picture. Sincere Heart is bitter class warfare; it is disillusion with ritual and manners; it is fury at what society deems proper at the expense of what is morally imperative; and it is largely ignored as another Kinoshita melodrama, and, since it was written by him, it's pretty much impossible to escape that category.

This touches on the question of whether Kinoshita melodramas should be ignored in the first place.  I've seen comparatively few, especially given that there are literally over forty of the danged things; my impression is that they're a bit stagey and not terribly well-directed.  Still, overall, they're well-written and effective.

But I have not seen one so far that matches the emotion—and skillful emotional manipulation—of Sincere Heart.  If it turned out to be his best screenplay, it would be neither a surprise nor a disappointment.

We begin in the Ariga household, maintained in what—according to the dialogue anyway—is lavish splendor, thanks to the salary of their patriarch, a CEO of a local company.  It actually has the appearance of a semi-modest middle-class home, little more than what any college-educated American might have reasonably expected from life back in 2007, before Republicans and law schools took it all way.  But one recalls there are significant differences between Japan in 1953 and America before the Collapse. 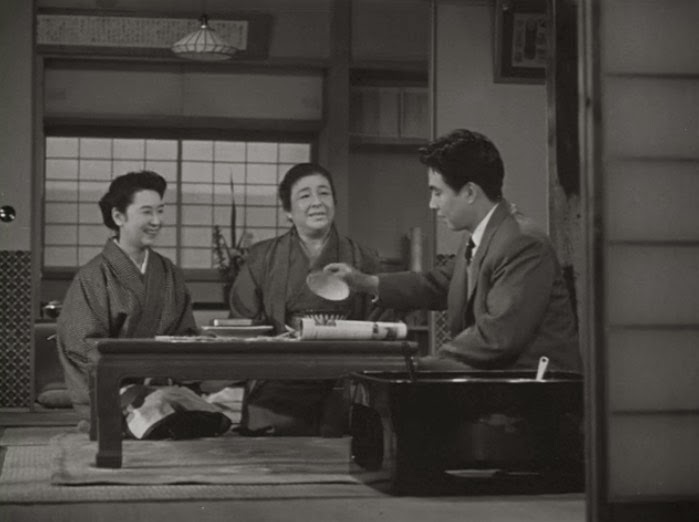 And I'm the guy who routinely calls any house with more than four bedrooms a "mansion," and kind of means it.

Our man is Hiroshi Ariga, as performed by returning Kobayashi player Akira Ishihama, now in a role that demands superior dramatic chops and not just charm and/or handsomeness.  Turns out he's up to it.

Hiroshi is the youngest son of the Ariga family.  He is engaged in preparing for that most stereotypically Asian ritual, the high-stakes, high-pressure exam that will determine the shape of the entire rest of his life.  We have those too, we just don't let them bother us as much.  And indeed, Hiroshi is a relatably callow lad, who would rather lose himself in the physicality of his rugby games than hit anything like a book. 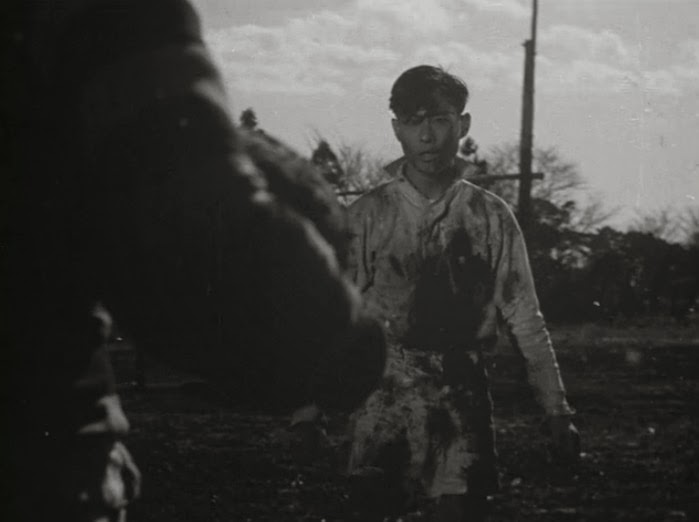 He is more than a bit spoiled, we come to understand; and ultimately we cringe when his wealthy father promises that if he passes the exams, he can have anything his little heart desires, assuming that it will be a ski trip or plane ride to Kyushu or another such pastime of the wealthy.

But no farther than across the street, real life is happening.  In shitty, overpriced apartments, not dissimilar to those American college grads now actually get, two sisters have come to share a room.  One is Fumiko, a pretty girl who laments that from their window neither the sun nor the moon can be seen. 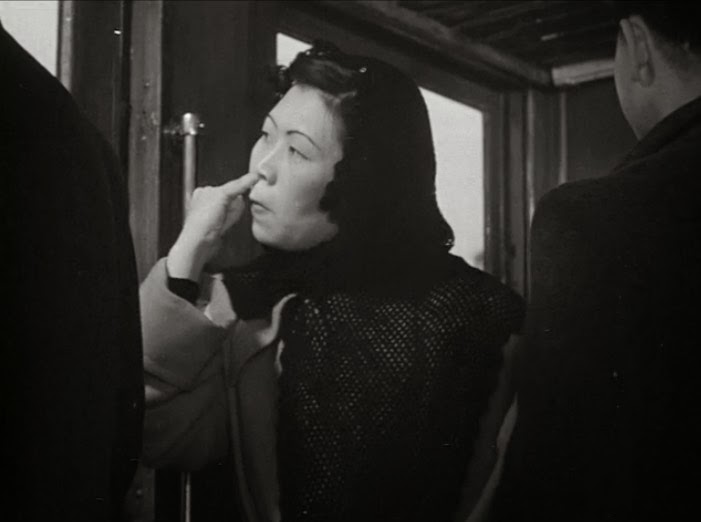 But from his bedroom window, Hiroshi can see her.  And so, like a sweet, teenaged Body Double, Hiroshi comes to not so much spy on her, as pine for her, although pining involves, necessarily, a lot of staring into her room. 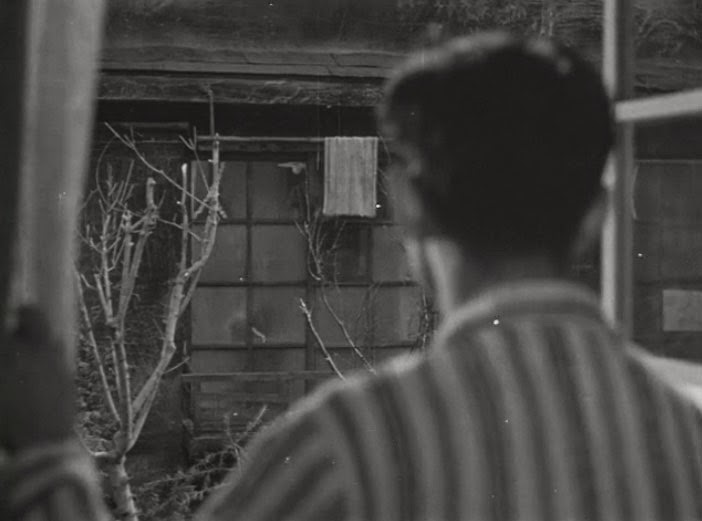 In any event, Fumiko is warmed by Hiroshi's attention, and looks for him as often as he looks for her.  But unfortunately, this is 1950s Japan and a lack of any formal introduction continues to prevent Hiroshi from doing anything more active than ogling her.

At least I can only assume this is why they barely share single line of dialogue with one other.  Though that itself assumes that Kinoshita's goal is realism and not outright fabulism; and that is a dangerous foundation upon which to build an analysis of this particular film.

Fumiko is no ordinary girl, you see; she has tuberculosis.  Hiroshi only knows what he sees, though, and as he must, falls in love with her before finally realizing—in a brutally affecting moment when he's on hand for her collapse—that she is not long for this world.

What converts this from a timeless tale of audience manipulation into a proper Kobayashi picture is how the two threads of Hiroshi's character arc are tied together.  Promised that "anything," Hiroshi retreats into furious study, to get the grade that will force his father to give him the money he needs to send Fumiko away for the treatment that can save her.

While Hiroshi struggles in solitude, life in the Ariga household continues undisturbed by the young woman literally rotting away in the tenements next door.  Even when they notice, which they barely do, her suffering manages to truly touch them not at all, merely providing another subject for their bland bourgeois gossip.  When his father asks what Hiroshi will ask of him when he passes the exam, Hiroshi can't just tell him outright; he wants to help someone, he says, but he refuses to identify whom.

To what extent this makes a great deal of narrative sense is possibly in large part a cultural thing.  There's other weird stuff in the movie that I mention now only because it has no other place to go.  For example, there's the fact that everyone in the movie seems to be a Christian, but with radically different rituals, so when the Yuletide rolls around, they hang scary Blair Witch mobiles from their ceilings instead of getting a tree (and, yes, cake is absolutely had).  Also, Japanese old time radio is terrible, in a completely different way than American old time radio is terrible (American old time radio is casually racist every ten minutes, but Japanese old time radio is impenetrably unfunny to everyone except, it seems, professional actors).

Yet there is a nauseous currency to Hiroshi's silence.  Asking his father for money for a rich person pursuit like a ski trip won't cause the slightest hint of displeasure, but his father actively recoils at the idea of giving him the money he would've given him anyway, if it involves helping someone.  Hiroshi notes that even their dog went to the hospital when he was sick; but the dog's a member of the family, after all. 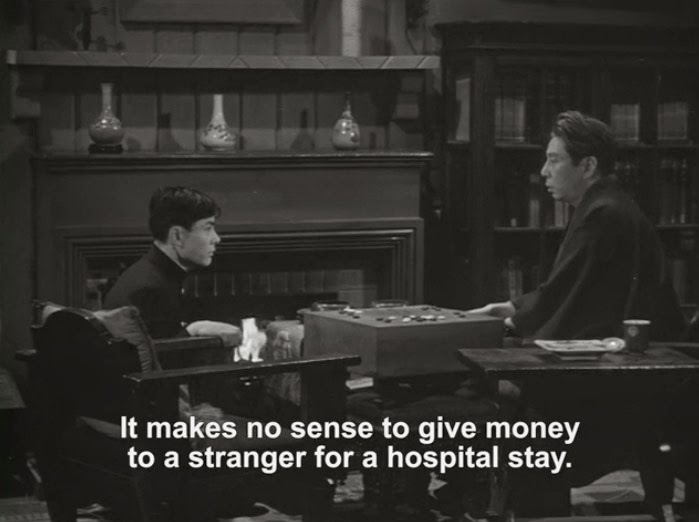 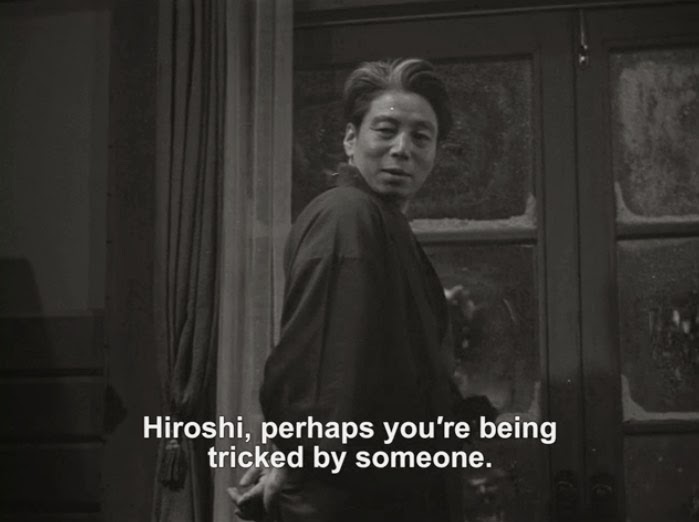 Warning: draw unintentional parallels with 2014 America at your own risk.

Ultimately, Hiroshi can't reveal the truth, because so long as his father has anything to say about it, there is no way in hell that Hiroshi is marrying a Goddamned poor, let alone a poor who would cough blood all over the nice silks.

This must be what Hiroshi believes at least (it's certainly supported by the film).  Or perhaps he's ashamed of having fallen in love with her at all, which is something to be a little ashamed of, given how little he knows her, even if his adolescent heart is surely in the right place.

But he won't reveal the truth until the end, when he breaks down in rage and tears and declares his love—a little too late for it do anyone a lick of good.  Not unless shattering the self-centered illusions of the Ariga family counts; maybe that's good for them, but Fumiko is certainly in no position to care.

As you can tell, it's a tragedy, and Kinoshita didn't see any pressing need to reinvent the wheel, because it's a good wheel (and a pretty damned mean-spirited wheel, for a coming of age story).

But, while schematic Sincere Heart may be, it's a scheme which is given enormous power by the accumulation of all the things that make it a movie—the flourishes of Kobayashi's direction and the sheer emotionalism of Akira Ishihama's performance (not to mention the scarily insistent, almost monumental soundtrack arranged by Keisuke's brother, Chuji).

I've already alluded to my favorite pair of shots in the film: after finding her in the snow, Hiroshi has brought Fumiko's unconscious body back home; he loiters in her sister's doorway while the camera zooms at him, and then back at her, emphasizing both the distance between them that he will never bridge, and the mad onrush of teenage feeling that steels his determination to try.

It's got a thousand of these little moments, each a little stab to the heart.  They add up, and when—finally—the climax punches you square in the gut, all you can do is just go down with it.  Perhaps equal credit has to go to Keisuke Kinoshita for providing the basis for a great fable here; but in the end it was Masaki Kobayashi who told it so well. 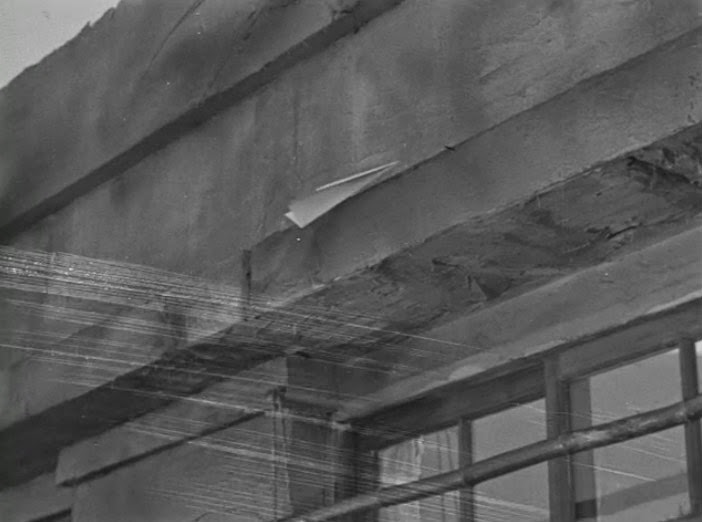