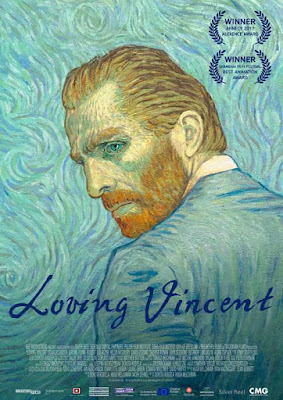 Actually, it seems like it's pronounced a whole lot of ways, but no matter what you call him, this tribute to the unforgettable Vincent Van Gogh is a piece of animation history that won't be soon forgotten itself. 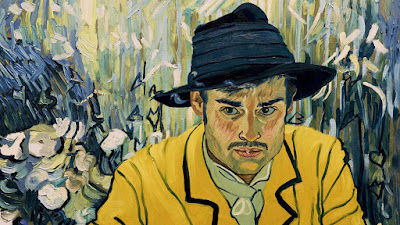 It's a cinematic first—for reasons that should seem pretty obvious even before you remember that ten year span between conception and execution—but the results borne out suggest that something like it should've happened ages ago, and then over and over, many times since, for Vincent is a beauty, incredible to behold.  If it is not 2017's most beautiful piece of animation, or even its second-most, or maybe even its third-most, it's only because last year was such an exceptionally strong year for cartoons (everywhere, that is, outside of the mainstream American animation houses, which were uncharacteristically weak, or absent, but I suppose you can't have everything all at once).  I feel safe in calling it 2017's most unique cartoon, anyway, and it beats that second World of Tomorrow with a stick, because, despite the great deal of evidence to the contrary, Don Hertzfeld is not a god.

As the title implies, the larger part of Loving Vincent's 65,000 oil paintings draw their inspiration from the oil paintings of Vincent Van Gogh, which is both central to its success, and, I'd argue, incidental: central, because the demiurge behind the film, Polish animator Dorota Kobiela (who has worked in oil-painted animation before, though not nearly to this extent), was driven by her love for Van Gogh's style to put it into motion, and because Van Gogh's individual works inform every last key image in the film; and incidental, because one suspects, at least a little, that no matter whose style Kobiela and her co-director/husband Hugh Welchman chose to emulate, the outcome of their endeavor would still have been a revolutionary moment.

So what needs to be pointed out, immediately, because there are many reviews of it that don't make it at all plain, is that Vincent is not, in fact, 65,000 oil paintings that look like Van Gogh paintings—unless Van Gogh had a period I'm not aware of where he switched his style to what Frank Miller's art might look like if he'd learned to paint.  (Admittedly, I'm no art historian.)  So it's really more along the lines of, at a guess, around 40,000.  And, while I'll have much more to say about this shortly, this does bring us to the plot of the thing—though it's worth asking, "Did this movie need a plot?" 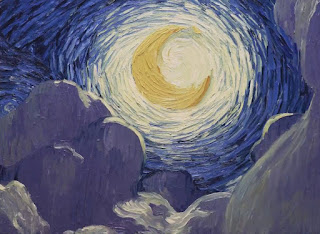 Those above-mentioned reviews, as well as the more diligent ones, will typically tell you that the plot driving Vincent's visuals is a bad one.  This is also not true: it's actually a pretty decent one, merely one that never quite justifies itself, when even something as un-revolutionary as a straight-up, no-frills biopic would've presumably been just as good or better—at least, had it been delivered within this singular aesthetic.  For that matter, there's nothing about Vincent that strongly militates in favor of a narrative film in the first place: it's a self-conscious art film that knows its audience is comprised of roughly equal portions of animation nerds and curious looky-loos, neither of whom could have been too disappointed with a movie that veered decisively off the conventional path.

Instead, though, what we get is a yarn—based on the historical fact of van Gogh's legendarily poorly-planned suicide, and apparently nothing else whatsoever—which begins when Armand Roulin, son of an Arles postmaster and one-time subject of a Van Gogh portrait, is sent off on a simple errand to deliver a letter from the artist to his brother Theo.  But as the initially-indifferent young man becomes inextricably mired in Van Gogh's limited social circle in Auvers-sur-Oise, Armand's simple errand becomes, shade by shade, a mystery with overtones of conspiracy and murder; and thus does the film soon take on the basic pattern of one Van Gogh painting interviewing other Van Gogh paintings about the Van Gogh who painted them.

Certainly, that idea is both clever and workable.  Indeed, once it gets through the unholy terror of its opening dialogues, which feel like dramatic readings of Van Gogh's Wikipedia page, only with the added bonus of an unvoiced "as you know" preceding every line, it's even involving (and occasionally genuinely cool—I never knew, until now, that I needed to see an action scene done in the style of a Van Gogh painting).  I'm even compelled to admit it concludes in pretty much the most satisfying way it possibly could, effectively throwing up its hands and stating aloud, "Van Gogh was not a well man, and this was, indeed, exactly what you could expect."  And there's something to be said about the way it corrals so many of Van Gogh's real life subjects into a potboiler that turns slightly philosophical at the end.  (In fact, the thing Loving Vincent reminds me of more than anything—that is, besides the Van Gogh segment of Kurosawa's Dreams, but that's obvious—is Alan Moore and Eddie Campbell's From Hell, which not only turned upon a murder mystery, albeit with far more legitimacy, but also had something of a similar conceit to its art style, which saw Campbell tweaking his style toward that of a Victorian pamphlet.)

In fact, over the last couple of paragraphs, I've just about argued myself into simply saying out loud what I think I must think about Loving Vincent, which is that the screenplay which Kobiela and Welchman hammered out, with the assistance of co-writer Jacek Dehnel, is more-or-less perfect, taken as what it is (and, crucially, what it wants to be)—because whether it's what you would've preferred is immaterial to that analysis.  So the worst thing about it is that it serves, I think unintentionally, as a distancing device.  At least, it's a device that does few favors to the bombastic melodrama of a man who cut off his own ear for a girl, and then tried to commit suicide by shooting himself in the torso in lieu of the more-traditional bullet to the head.  Even this does work, in its way: it's chillier and less on-its-face interesting to tie the emotional arc of a movie to some guy in a yellow coat (Curious George movies never make this mistake), but for a movie that, to some extent or another, dedicates itself to the proposition laid out in its opening Van Gogh quote, "We can speak no other than by our paintings," and then proceeds to explore that proposition in such gloriously literal ways, it'd be downright dishonorable to take any serious issue with Vincent's approach.

Yet I still can't say it justifies itself, and the reason for that comes down entirely to the staggeringly misjudged formal decision Kobiela (and Welchman, but mainly Kobiela) made, to use Armand's interviews as launching points for an inordinate number of flashbacks.  (About 25,000 frames' worth, you'll recall.)  Not super-imaginative, sure, but hardly fatal; except these flashbacks are where the film takes a hard right turn into black-and-white oil paintings that surrender not just the color but the texture of the paint—a curious choice indeed for a movie celebrating an artist whose foremost and most famous quality was his idiosyncratic use of texture and color.  You can't even say you need it to keep things clean for an audience of dummies: you know those scenes where Vincent Van Gogh is alive?  I think those would be the ones that are set in the past. 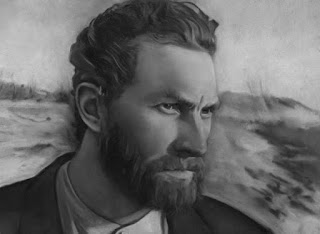 The damnable thing is that the black-and-white sequences still look fucking great—frankly, they're little monochromatic jewels of noirish beauty—but when Kobiela put them in this movie, it's hard to appreciate them as anything but a frustrating exercise (with way too many reps) in waiting for the good stuff to come back.  It's the log in this film's eye; in one of the making-of featurettes where Kobiela explains herself, she can only say "that's what we chose to do..." with the exact same audible ellipsis I've faithfully reproduced here, as well as a hint of regret, and if she'd only said out loud, "we ran out of money," or "this film took ten years of my life and if we'd actually done it all in the style of Van Gogh it would've taken twenty," I don't think I'd hesitate calling it a full-on masterpiece.  Hell, I'm still on the fence about that as it is.

Certainly, all is forgiven.  The 40,000 frames that do live up to Kobiela's vision are, for the most, religiously good.  Here's the part where I cop: I am not this world's most outsized van Gogh fan, even taking into account that nobody's taking that title away from Dorota Kobiela until a supervillain starts stealing Van Gogh's actual paintings to decorate his volcano lair.  But in this respect, the film does me something of a favor, because what I find less than exemplary about Van Gogh are his portraits; and Vincent, being rotoscoped animation—a time-saving tool that shaved a couple decades' off production, so we're told—is obliged to conform itself to its actors' physical reality a great deal more than Van Gogh did on those occasions where he decided that symmetry simply wasn't an important aspect of human faces.  What this leaves, then, is the backgrounds, modeled on Van Gogh's landscapes; and Van Gogh's landscapes (let alone his skyscapes) are just incredible.

So it follows very naturally that the most wonderful thing about Vincent is its application of movement to those backgrounds: to the clouds and stars and trees and fields and fields of wheat that comprise the content of Van Gogh's masterworks.  It's when the leaves rustle and lights glow and shadows fall that Vincent becomes its best self, an experience in texture and color to rival the paintings it's based on, a sight so shocking it elicited from me, at least, an outright physiological response of joy, when those big clumps of rain began to pour from that chaotic sky above.  (It stands to reason, therefore, that the only time the movie ever stylistically falls down, in the color sequences, is when they cheat and conspicuously don't animate the backgrounds; and that this is a completely normal cheat in the world of cartoons does me no good when Vincent is such a sublimely abnormal one.)

This isn't even to get into the mechanics of reflections and transparency, or the mesmerizing way that the brushstrokes form into faces—the number of frames that aren't in some way beautiful are few indeed.  Even the weakest work is nevertheless fascinating.  (So if you did force me to identify "the weakest" moment, I suppose it would be when you can tell that the animators on Adeline Ravoux have changed for one scene, and the strokes that form her face become a little artless—radiating from a central point around her nose, instead of contouring wildly, but logically, around the curves of her cheeks.) 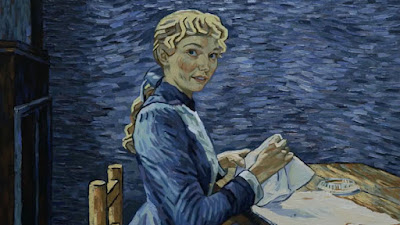 In the end, you do find yourself slightly annoyed by the measures the production had to take in order to exist, because while you're able to recognize necessary compromises when you see them, it's also possible you might not actually care.  But then again, very few films are as uncompromised as this one—in feature-length animation, there are practically none—and this film, to use a word I don't believe I've ever used, in over 500 reviews' worth of words, is visionary.