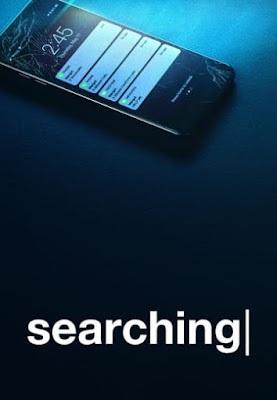 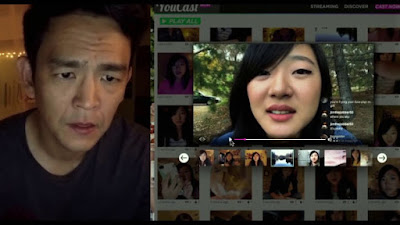 Arriving fourth (so far as I've counted), and being the third original property to make do with the conceit, with Searching I suppose we at last have a genuine little movement on our hands, of movies that have surrendered to the depressingly uncinematic reality of 21st century life, which, when it involves human beings at all, tends to involve them staring at computer monitors for hours on end.  At some point, a more sensitive filmmaker will probably take on the same challenge—of presenting a movie as nothing but the images that present themselves on a computer screen to a user we're invited to identify with—and actually do something special and humane with it.  But until that day, genre directors will keep the gimmick warm for them, and that's fine by me.

Of course, even seen in the light most favorable to it, and even in comparison to its fellows, Searching really does come off as a vessel for its gimmick; its forerunners, at least, still made sure they were about something other than a screen.  Open Windows was about the way celebrity (at least for women) is too often indistinguishable from well-publicized fuckability and the attendant brutal animus; Unfriended, the consequences of cyberbullying.  Searching wants to seem like it's about something, and the best parts of it are, in fact, those flashes of significance, when it looks at things beyond its horizons—at hero David Kim's technologically-enhanced estrangement from his daughter; at the hidden worlds we create for ourselves on the Internet, all crying out simultaneously for attention; at the chronic disingenuity that plagues people's performances on social media; at the Fifteen Minutes Hate of unwanted Internet fame that can destroy lives; even, for a little while, at the meaning of loss—but it stops being about most or maybe even all of those things at a certain juncture, maybe two thirds of the way through, and becomes increasingly about nothing (not even necessarily "increasingly about itself") every further moment it goes on.

Fortunately, it does not go on very long (it's 102 minutes, so only slightly too long).  And its mystery-thriller can survive being about nothing; plus, if you wanted to be generous, it is still about the Internet as a mystery-solving tool, which, in serving as a constant reminder of the limits of our protagonist's more-or-less realistic capabilities, does at least provide a most suitably claustrophobic setting for our tale.  All told, it shapes up to be a pretty good mystery-thriller, which is all we ought to have expected or hoped for in the first place.

It actually begins with its finest gesture, what amounts to a short film that could be easily severed from the rest (though, to its credit, the rest could not be severed from it), and probably be deemed genuinely great: it's a terrifically emotionally-manipulative journey through the life of the network we'll be using, starting with the establishment of an account for baby Margot Kim, David's daughter, and continuing through the years as hints pile up that David's wife and Margot's mother, Pam, won't be a very active character in this movie.  It has both the same effect and purpose as the short-film-style prologues that introduce Up and John Wick; it lands somewhere in the middle in terms of quality, though it maybe even surpasses 'em on the narrow metric of novelty, its juxtaposition of growing up with a family tragedy against the development of technology neatly historicizing our little father-daughter tale.

This melancholy clipshow subsides around age 15 for Margot, and we start our real narrative with David Facetiming his daughter, annoying her with his cliche brand of parental scolding about taking out the trash and such, without much indication that their relationship goes any deeper than this kind of logistics anymore.  She tells him she'll be pulling an all-nighter with her study group, he shrugs, she never comes home, and, realistically enough, he doesn't even worry for a little bit, or notice this as terribly unusual, despite the three odd calls he received in the middle of the night while he was sleeping.  Eventually, he does notice that his daughter's absence is strange, and, ultimately, realizes that his girl is truly gone.  The cops become involved, in the person of Detective Rosemary Vick, but the gruntwork falls to David, as he tracks his daughter's traces through her social network—finding, to his dismay, she doesn't even have one worthy of the name—and, in some adorably low-key hacking, breaks into all of her various accounts.  He discovers she's been lying to him for a long time; the question remains "about what?"  And that's when things get worse.

I shan't spoil anything, because whatever else Searching is or isn't, it's pretty fun.  It's clearly more of a child of Open Windows than Unfriended in this regard.  Amongst others: besides sharing more of a genre with Open Windows, it also shares more of an aesthetic.  Just for starters, the resolution on David's off-the-shelf monitor is freaking outstanding—to the point of being an actual presentation issue that nags at you while you're watching the film.  You can tell right off that it's going to eschew the comparative formal austerity Unfriended lived in (I'm sure that seems like a funny phrase to use to describe Unfriended, but that's what it was, honest: a locked camera perspective on a laptop that did nothing to emphasize any particular piece of information outside of the way the actions of its characters did so, on the basis of how I guess Skype works), in favor of guiding its audience in a very controlled, very authoritarian manner across David's screen, gliding fluidly across his various windows and even zooming in and out upon items of interest as the narrative demands.

It is, in fairness, a lot more information than Unfriended provided—at the end of the day, "about something" or not, Unfriended could've been a 1940s radio play about a haunted party line, and since there's pretty much zero chance I'll ever review it individually, let me say that it's a much worse movie, breaking itself structurally in the worst way a horror movie could by raising its stakes too high, too fast, and certainly way too high to believe that even the admirably-naturalistic high school shitheads of its cast could still conceivably care about the pissant "secrets" revealed by its vengeful ghost's game of "Never Have I Ever," at least not when sat next to the very real possibility of their imminent deaths.  Well, anyway.

Searching's also probably not as good at doing what it's doing as Nacho Vigalondo's Open Windows was, Open Windows being presented with uncommon grace for a movie so completely overloaded with visual stimulation; but Searching's director, Aneesh Chagnaty (also co-writing), and its pair of editors, Nicholas Johnson and Will Merrick, at least compete, doing a much-better-than-credible job of shepherding our eye across David's screen in a simulacrum of several dozen "long takes."  (It has in common with Unfriended an employment of real, branded software applications, I guess, and this adds some verisimilitude, and that's nice, but I don't really care.  Searching loses whatever verisimilitude points it has scored, anyway, long before its plot has gotten a little silly and preposterously-thrillery: on a technical level, David's Internet experience is so seamless and magical it's more like an advertisement for the Internet than a depiction of it.  So let's at least give Unfriended credit for having some grit, eh?)

But regardless of everything it does right or wrong, it turns out that by far the best thing Searching has going for it is John Cho—an essential element, frankly, considering the modal image of Searching is John Cho's face—but although Searching is, in its soul, a relatively empty mechanical exercise, Cho refuses to play it that way.  He stays in the moment, in every moment, and in doing so manages to keep that emotional hook in us long after the manipulation of the opening has faded and even after we've begun to suspect we're waiting for a foregone conclusion that isn't half as steely as Cho's weathered and bedraggled performance deserves.  (Cho's on a streak of strong, quietly-unraveling leading performances this year: he was at least this good in the underseen drama Columbus, too, which I like more every time I think about it.)  But basically, Cho does not concede that David's a character in a thriller, and the film benefits immensely from it.  Hence its stabs at comedy are funnier, its stabs at melodrama more heartbreaking, and even its little bits of interiority (which tend to combine melodrama and comedy) are revealing and meaningful, so that when David replaces an exclamation point at the end of an angry wall of text with a period, it's very funny and a solid character beat, because even though Cho isn't on the screen right now, we're seeing him frowning thoughtfully in our mind while David's doing it.  (Sure, it steals this technique of showing snippets of inner monologue through deleted strings of unsent text from Unfriended, but does it better; and, besides, it's almost certainly the best little thing either movie does with their unusual format.  Meanwhile, it's worth grousing about the stupid audience handholding/lazy staging Searching descends to in its worst moments: I don't expect a hard-to-follow art film out of this, but I would at least expect the film not to undercut David's perspective by insisting he's watching news footage of himself, as if he may have forgotten what he spent the last eight hours doing.) 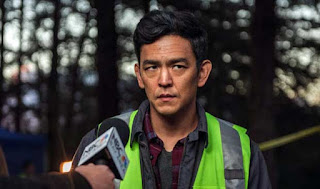 Turns out the long-term effects might've been worse than Harold thought.

It is, ultimately, a movie that would never survive longer than its own runtime without its format—even with Cho's outstanding performance, it would still only be something you watched, half-interested, and probably half-enjoyed, before forgetting about it as soon as the next show came on.  (It truly is TV-scaled, for good or ill.)  With its gimmick, however, it finds more purchase, and becomes actively good, even if you're pretty sure that the gimmick probably ought to be useful for something more worthwhile than the boilerplate lost girl mystery we get.  I mean, hell, Open Windows at least went fucking crazy.  Even when Searching gets crazy—and, yeah it kind-of does—it's only ever screenwriting in service of making its scenario less thematically interesting.  But the good and great parts stand out, nevertheless, and I think I probably will remember it.  For a while, anyway.  Maybe even beyond the next one.