We'll get together then, son; you know we'll have a good time then 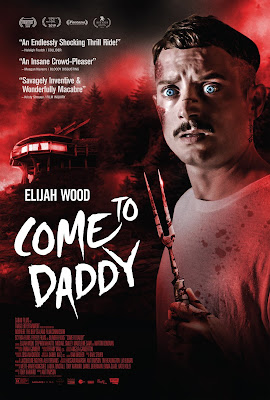 New Zealand filmmaker Ant Timpson, now making his feature directorial debut after quite a few years on the indier side of the industry, has done exactly one thing that makes me think well of him: he produced The ABCs of Death (that's, er, not the thing), and, when he turned down Canadian film collective RKSS's submission for the letter T, he offered them not just some empty encouraging words, but a measure of real institutional support.  As a result of Timpson's backing, they were able to rebuild their "T Is For Turbo" short into a feature, Turbo Kid; this, in turn, led to Summer of 84, one of the best films of the 2010s; and both serve as a welcome reminder that, despite the overwhelming weight of evidence to the contrary, independent cinema actually does have a right to exist.  So good on Ant Timpson.

On the other hand, Ant Timpson has added to indie cinema's "con" pile directly with Come To Daddy, which is awful, awful stuff, and the best thing you can say about it is that, roughly halfway through, it stops being merely stupid and boring in order to become stupid and completely dysfunctional.  Meanwhile, it stars Elijah Wood, who has these past eight or nine years cultivated a reputation of his own, in his capacities as both an actor and a producer, as a certain seal of quality for quirky little projects.  It's a well-deserved reputation, maybe slightly tarnished now, though it's worth noting that, of the seven full production companies that put their thousand or so bucks into Come To Daddy (plus its two distributors, bringing Come To Daddy close to the very platonic ideal of the modern feature film, which is an hour and a half of company logos and no actual movie), Wood's SpectreVision is nowhere to be found.  And you can interpret that as a bad sign if you want: while he agreed to star in it, and was almost certainly invited to invest in it, whenever the topic actually came up, he shouted "squirrel!" and ran out of the room.

So: Wood plays Norval, a recovering alcoholic and aspiring DJ who continues to live with his mother as an adult ("at your age?" asks the dialogue, which isn't especially conclusive, insofar as Norval is embodied by an eternal Hobbit who could be playing anywhere between 23 and 40), and clearly this is because his father (Stephen McHattie) ran out on him when he was just a toddler, and he never quite got over that.  Recently, however, he's received a letter from his dad asking him to come out to his mansion on the Oregon seaside, and Norval's dutifully accepted the invitation, though once Norval's arrived, his father doesn't seem capable of pretending he's welcome for more than about ninety seconds.  Arguments ensue, and arguments escalate till they're about ready to kill each other—whereupon the old man drops dead, victim of his own apoplectic rage, leaving Norval to sit there with his corpse and try to take stock of the man he called dad.  Then the movie finally begins, and makes the shift that I mentioned earlier.

Come To Daddy, as the title suggests (and the paired opening epigrams, courtesy William Shakespeare and Beyoncé Knowles, respectively, make quite tiresomely plain), is a comedy, albeit one with a dark streak, and could conceivably be taken as a bone-dry parody of several interlocking screenwriter clichés regarding every screenwriter's apparent terrible relationship with their father.  It isn't that (Toby Harvard is the sole credited writer, but the story was based on an idea Timpson had at his own father's funeral, so it's hard to know who's to blame for precisely what), and even the first phase of the film, which at least kind of looks like its goal is push its bad dad to a point of comedic absurdity, is mostly permitted to just flail around.  As far as Norval goes, he's mainly the hair and makeup department's creation, granted the kind of overdetermining hairstyle (he resembles Vector from Despicable Me, only with a mustache) that pretty much prevents Wood's performance from expanding anywhere past the most obvious gestures of a pretentious, spineless twerp archetype; McHattie, on the other hand, doesn't even achieve that much specificity, relegated to spending almost every second on screen drunkenly shouting crude insults.  The script, obviously disinterested in the slightest modulation to make it feel like it had two real personalities caught in an awkward reunion, also isn't interested in giving its pair of sketchy cartoons much in the way of fun cartoon situations, let alone fun cartoon dialogue.  (The closest is a test of wills involving Norval's blatant lies about being a successful musician, though this is mainly memorable because Norval utters the film's one "good" line, "I'm proud to count Chance the Rapper as one of my closest allies," which at least manages to draw a cringing, disbelieving laugh.  Meanwhile, a cop that arrives in the aftermath of Norval's dad's death riffs for what seems like several years about the "raisin eyes" of evil men, which I'd say indicates the ordinary level of Come To Daddy's humor, except most of it is somehow less well-structured.)

The dark comedy/psychological thriller that goes nowhere is not, of course, meant to be the point of the film, though if it isn't the point, that raises the question of why, precisely, we've been expected to spend forty-five minutes wallowing in it, if it was all meaningless.  In any event, when we finally get to Come To Daddy's first (and final) narratively interesting idea, it arrives in the form of a mid-film twist that reorients everything we've so far seen, and, after a fashion, it wants to be Psycho.  Instead, it just wastes a lot of your time, and the last criticism anybody should have about a 93 minute film is that it still can't justify its runtime.  In the interest of manners, I shall not reveal its twist.  Let us simply say that at the halfway mark a movie that has always been shoddily-constructed starts collapsing completely, becoming a sub-sub (sub-sub-sub-sub) Tarantino (or maybe Ritchie) stupid criminal movie that doesn't prove to be any more competent in this mode than its previous one, but, on the plus side, at least fails to be competent in wackier and more off-the-wall ways.  Come to Daddy is never good, mind you, not even so-bad-it's-good—but it's at least more enjoyable when Norval is stabbing dudes in the brains and/or genitals, and you can play a nice game of "see how fast you can spot the plot holes," which is easy, because they're all recognizable the instant they crop up, e.g., "why didn't the guy know there was somebody else already down there?  Norval didn't move the table back."  (And you get extra points if you realize that the whole first forty-five minutes of the fucking movie falls into its own enormous plot hole, once that mid-film twist finishes twisting itself out).

And, yeah, I know that "Elijah Wood putting sharp objects into various organs" sounds interesting in itself, though this splatter film really only has the gumption for the single good gore shock, and 90 minutes is a long time to wait for that kind of meager reward, especially when they're spent with thriller setpieces just as sloppily-conceived as everything else here, and cut together with student film levels of rhythm or suspense.  Indeed, it's not just mediocre otherwise, but downright poorly-made, proficient even when it's at its best, and at its worst adding characters in ways that reveal that Timpson can't direct more than two people at a time, and losing whole scenes in underlit digital cinematography from Daniel Katz, whose planning for the film seemed to begin and end at "natural onscreen light sources equals art, right?"  In the end, it's just such a drag, narratively, formally, thematically, whatever: a bunch of tired ideas about fatherhood and masculinity clumsily grafted onto what plays less like a father-son drama than it does improv comedy between people afflicted with mild brain damage, all in the service of an offensively obvious bid to make what was only ever a bottom-of-the-barrel crime thriller resonate with some brand of unearned emotional significance.  Annoyingly, it even seems to have worked: Come To Daddy was never going be a hit, and not everybody was gulled, but when it came out of the Calgary Film Festival last year, it had its boosters.  I've said it before, but I have no idea what the hell is wrong with film critics, except that if their fathers didn't love them, I can see why.