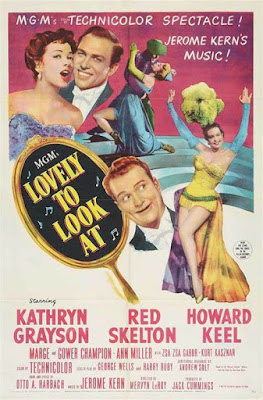 LOVELY TO LOOK AT
1952
Directed by Mervyn LeRoy and Vincente Minelli
Written by George Wells and Harry Ruby (based on the musical play Roberta by Jerome Kern and Otto Harbach based on the novel Gowns by Roberta by Alice Deur Miller)
Spoiler alert: moderate 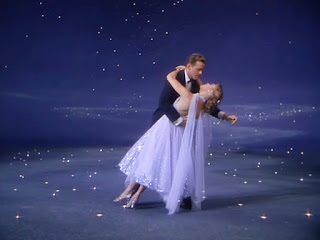 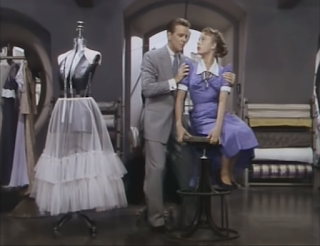 Obviously, I mean the Champions, whose characters don't even really "need" to be here at all—they occupy a subplot that hardly perturbs its surroundings—and you could cut them and still have the exact same story, except about fifteen minutes shorter and so bereft of its best parts that I wouldn't be writing this review.  I don't want to completely dismiss the rest of the film: there's some very fine work in Cedric Gibbons's production design, particularly in the musical sequences, but also for Roberta's salon itself, rendered as an elegant, empty gray box, very much like a mausoleum and about as easily inhabited by the women who call it home.  LeRoy arranges it all very well, too, managing alongside editor John McSweeney some surprisingly abstruse connections that still work out, including a downright strange pair of mirrored shots across a conference table full of creditors that violates the 30 degree rule, getting across Stephanie's sense of dislocation in the face of an egoistic American.  But as there'd be little here to adore without Marge and Gower Champion, it is largely to them that Lovely To Look At leaps from "okay" to "fucking masterpiece" frequetly enough that I'm very happy thinking of it as potentially the most underrated of all MGM's musicals, insofar as the only reason I even know it exists was that I noticed it during the Warners Archive sale and thought it looked cute.
The Champions accomplish this with just two featured numbers, the first being "I Won't Dance."  In Roberta, it was a tossed-off diegetic performance, nothing to do with anything.  Here, they flip the genders of the lyrics, making it into the come-on song I expect it was always meant to be, and it's a nice, bouncy, very earwormy little tune, presently instigated by Jerry cornering Clarisse in the sewing room and asking her, over and over, to dance, which she (as you likely guessed) will not do.  I am not selling it.  Here's what I think makes it glorious: Marge and Gower were (gosh, you're good at guessing) married, and you can see every little bit of how that could've happened, because their chemistry is unimpeachable, sweetly sexy with an onscreen rapport you practically never see from anybody.
Well, LeRoy and McSweeney assemble it out of just five shots, with an effort toward making them invisible—they're continuity cuts to new shot scales, not brand new angles, and I would not be surprised if the routine itself was performed in just one take with multiple cameras—and they're composed with some thought toward making the camera a "dancing partner," but, mostly, to cleanly capture the innumerable small gestures that make up the rich complexity of what seems like (and is!) pure frivolity.  Marge plays Clarisse's reluctance as a put-on, which is one reason it manages to be so charming, and she remains the pivot of every composition—inevitably, really, given that her lavender dress and blonde hair are the most vibrant colors in a gray room, and she's being pursued by a man in a gray suit.  Gower burns a lot of calories to impress her, spins her around on a stool to the point that anybody but a trained ballerina would barf, and finally begins to dance with wireframe mannequins as stand-ins for other women who might be happy to have him, making her jealous and finally melting her heart—at least for the duration of the dance—whereupon she becomes the more active partner, joining him in a shotgun medley of dance styles, only to reject him at the end anyway with a coquettish brush-off that's very blatantly an invitation to try again.  I don't know: if I wanted to show somebody just one sequence to demonstrate dancing as not just an expressive art, but an indispensable component of a narrative, "I Won't Dance" might be the first I'd think of, though of course it's expressive all over the place, and my favorite things about it are the small ones: the way Marge (more than "Clarisse") indulgently laughs at the corniness of her husband's woo, or the implication of bondage with a measuring tape, or the delicate shrug of a mannequin's left shoulder that Marge incorporates as her own motif, a signal that she's not that impressed, though she could be talked into seeing more.
The Champions' second number is vastly more straightforward, and maybe the most famous part of a semi-obscure title (it was homaged with computers in La La Land).  It's also heartbreakingly romantic.  Again, Jerry practically physically shoves Clarisse onto the dance floor, which turns out to be what she wanted in a good old-fashioned confirmation of mid-century norms, then the restaurant they were in just... disappears.  Not even in a cut: the camera pushes in on the couple kissing before a window, and when it comes back out, they've been transported into the starry night beyond, and now they're dancing across an airbrushed soundstage universe.  Gibbons's most vital contribution to the film, it's exceptionally well-done for what it is, but the best part might be the tiny shining "stars" hung from the rafters—such a seemingly insignificant thing, it gives just enough illusion of three-dimensionality to sell the wild conceit of dancing across galactic space.  (The transition is great, too, if, like me, you enjoy seeing the seams in old movies; I kind of love that you can see the shadow of the set move on the back of Gower's head.)  The dance itself is perfect, abandoning the ideas of challenge and response that drove "I Won't Dance" for beautiful synchrony.  It remains a palpably erotic idea of two souls coming together—whatever else, it'd be difficult to watch this film and come to any conclusion besides "the Champions had outstanding sex"—but this metaphorical tryst is infinitely sweet and tender, too. 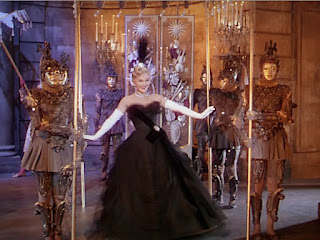 With two of the best sequences in any Golden Age musical (and possibly the best pas de deux), it may seem that Lovely will not top itself for its finale.  Lo, it does not, though its finale is a worthy one.  Directed by Vincente Minnelli rather than LeRoy (the latter seems to have called out sick), there's a noticeable difference in styles, mainly in that I don't think Minnelli had a lot of time to impose much style on it, except perhaps to emphasize the garishness already inherent in the concept. (Which, in fairness, is the Minnelli style, and there are a few ideas here that showed up first in Ziegfeld Follies.)  Above all, the goal of the fashion show that closes out our story is to show off the costumes designed by Adrian Greenburg, marking his triumphant return to MGM, for whom he had served as designer for some 200 films.  He'd left in 1941 partly due to his desire to create his own New York fashion house, and he'd achieved success that had continued even after the Nazi occupation of his French competitors had ended, though his salon would close in 1952 due to his declining health and unwillingness to bequeath the "Adrian" brand to any successor.  So Lovely is very much his swan song (it was his last film work), with a lot of very interesting Technicolor creations arrayed across dozens of women.  Some of them would not even be entirely humiliating to wear out in public.  Obviously, some (like the swimsuit with a bustle) could never be worn outside of the confines of an artistic exhibition without somebody busting out laughing.
Gibbons's backdrops are as phantasmagoric as the costumes, shifting to suit the collections.  The least successful involves the Champions' denouement, a dance that tells the story of a French thief (or something), and since the searing reds and kinda-ugly greens of the lighting were deemed inadequate, we also get visions of actual hell in the form of demons with elk skulls for heads; it's where Lovely's finale loses me a bit, because it's a little too narrative, and I just don't comprehend what story the Champions are trying to convey.  The very last phase gets back on track with metallics and crisp black-and-whites representing aristocratic fashions—this also involves nightmares, in the form of giant candlestick cybermen, and they are arguably more unnerving than the demons—but this is more abstracted and easier to grip, plus I absolutely adore how the film just slams its non-conclusion down on all our principal characters, decked out in the most baroque of Adrian's costumes, with the implied assurance that they'll all live happily ever after.  Minnelli does not do much more than show off the finale's imagery: there is never the sense that we're watching anything beyond an edited version of the fashion show itself.  This is fine, although it's so over-the-top that you keep expecting some cinematic elaboration to take hold, and it doesn't.  It's a good ending, anyway—Gibbons and Adrian's work is compelling enough to earn a showcase, even if showcasing it is all Minnelli does—and so if Lovely To Look At is perhaps not always great, it's surely great enough, often enough, that it deserves a much higher profile than it has.
Score: 8/10
Posted by Hunter Allen at 8:34 AM