Everybody wants to [destroy] the world, part 2 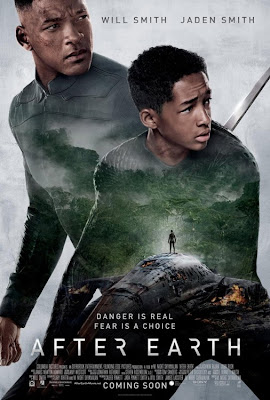 A metamovie, about what, basically, constitutes child abuse.


Part 2 of 3 in a look back at 2013's films of the cursed Earth; Part 1: Oblivion and Part 3: Elysium here and there respectively. 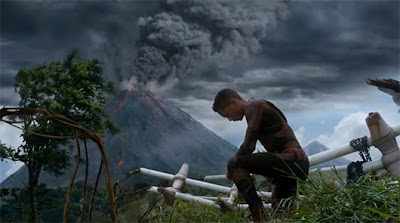 Welcome to the Wicker Future. Take a knee.

A thousand years ago, the human race had to evacuate an Earth made increasingly uninhabitable by global warming, or possibly anthropogenic vulcanism. The United Rangers were organized by the governments of the world to conduct the evacuation. Wagon training to the stars, humanity found another planet named New New Mexico. There, we built tents and wove furniture such as God has never seen, and put electronics in them. 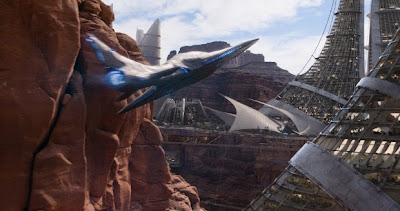 "Wicker Tower, we are approaching Summersisle.  Request permission to land in a less goofy movie."

Unfortunately, the new planet was already claimed by its current inhabitants, whom we drove off or killed, because Human Nature. Upon fleeing, the natives released their arsenal of CGI, the Ursas, a species of monster they had (poorly) designed specifically to wipe out human life. The Ursas are blind, but can smell fear. However, Ranger officer Cypher Raige has developed an effective countermeasure to the depradations of the Ursas: the technique of “Ghosting,” a martial discipline which grants its adherents the capability to experience no fear, rendering the Ursas truly blind. In the process, he became legendary.

Now, personally, I’d have suggested the deployment of security forces with machine guns, grenades, land mines, and Hellfire-equipped drones, but those technologies, as their manufacture does not rely upon the skillful artisans of the spaceship loom, appear to have been lost along with Earth, the color green, and bound books, such as Moby Dick (featured in the film, to no cognizable artistic effect) and On the Origin of Species (not featured in film at all, even by inference).

Cypher has a son named Kitai, who doesn’t make the cut to join his father’s organization, and the central arc of the film is his development from disappointing crybaby to murderous robot. This regurgitation of the hero’s journey is brought to us courtesy of a father-son bonding trip gone horribly awry, when their spaceship is downed by asteroids and/or gravitons (gravitons are reportedly the number one cause of all crashes). All the bit players die (conventiently), an Ursa that was being transported for Ghost training is released (oops!), Cypher’s legs are broken (ouch!), and Kitai must undertake a dangerous hike in order to communicate with his User once they make their emergency landing on (wouldn’t you know it?) Earth.

What you might not have expected is that Earth is basically 100% fine, except 1)in the thousand years since exodus, thanks to a screenwriter’s notion of what evolution is, some species have rebounded in numbers, found new geographic ranges, or gotten larger and 2)the atmosphere has changed to become entirely deadly to humans.

Those who have received even the most perfunctory education will find those two items mutually contradictory and their placement side by side may make you, like me, feel extremely annoyed. It takes a certain kind of ignorance verging on cognitive dissonance to put scenes of giant animals that could probably not perform the physical activities they do in After Earth in any kind of oxygen regime, and then have our protagonist wheeze and stumble as he runs out of this lung-putty stuff that makes his respiration “more efficient.”

At least in Avatar, you had an entirely parallel evolutionary tree with entirely parallel metabolic development.  Pandora’s atmosphere could be radically oxygenated, but also be permeated by lethal levels of CO2, and there was no contradiction when Pandoran life could cope with it without issue and humans bit the dust.

Since this is Earth, and since this is only a thousand years from now, it doesn’t really make a lot of sense to say that the atmosphere is CO2-toxic when regular Earthling megafauna are thriving, including some which are virtually identical in function to us (primates do show up, but unfortunately ride no horses—the wait till 2014 is long).  If you want a CO2-toxic atmosphere and an Earth not very far removed in geological time from today, what you'll necessarily wind up with is a vast, Permian-Triassic desert.

The ridiculous space accent employed by the Raiges in their dialogue shortly stops being particularly distracting (on one hand fortunately, on the other not so fortunately because once it stops being distracting it also stops being funny).  Thus, after a fashion one might unironically enjoy their interactions when they are playing to their characters’ ideals as stoic, underwritten Rangers. Sometimes they are actually legitimately funny. Too bad there are parts in the script where the younger Smith has to actually act; these never stop being funny, legitimately or no.

Which is not to say Jaden Smith failed to make me feel any sympathy for him. Just not for his character. Kitai Raige may have a distant and stern dad, but the old man has a certain objectivity which you can admire. Early on, when Kitai gives Cypher the bad news that he was denied admission into the Rangers, “You were too young. You weren’t ready.”

Will Smith has never and apparently will never say the same thing to his son, even though he should have. Although he has a certain degree of genetic charm, as an action hero or as a dramatic actor, Jaden has less range than his mood-ring survival suit, and since he carries this sparsely-populated and ponderous film almost entirely on his shoulders, it was inevitable that he’d buckle beneath the weight. After Earth gives the story-by credit to the elder Smith: working through issues with fiction is a healthy thing, but having someone film it and market it to the masses, might be less so.

I’ll grant that Jaden did convince me that he is NOT A COWARD. Someone who has an appreciation of fear would be unlikely to take on this demanding role with basically no experience and marginal evident talent. Unfortunately, what this movie about overcoming fear proves is that discretion is indeed the better part of valor. 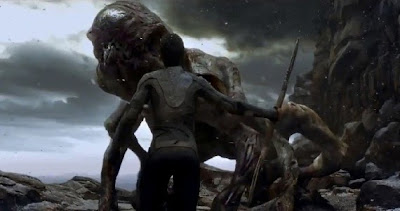 You can't escape your destiny.

Or maybe he is a coward.  He probably knows that he—at present—kind of sucks.  The brave thing would be to stand up to his father (as his sister reportedly did).  But as Cypher Raige is to Kitai, Will Smith is to Jaden: if After Earth is any indication, proving himself means doing exactly what he's told to do. 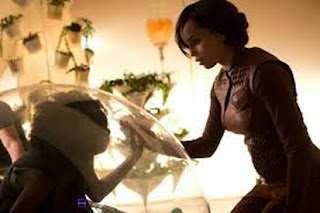 But you know? For all the negative (even disturbing) aspects of it, which are many, it’s M. Night Shyamalan’s best directorial effort since Unbreakable. High praise, I know. But you could do worse than After Earth, and Shyamalan certainly has. Shyamalan can still shoot shit pretty well.

It’s funny, though, because this is a movie that could’ve used a twist. While watching After Earth, I wrote a much better movie in my head involving the Ursas as changelings or Terminator-like infiltrators, and it turned out Kitai was the alien predator all along. OK, maybe not “better” in the sense of “more good,” but certainly “better” in the sense of “more anything.”  After Earth is pretty flat.

Overall, I can’t say it’s really, deliriously bad. I even appreciated its old-school B-science fiction tone. I can’t shake the feeling that I’d appreciate this movie a lot more if it’d been done with stop-motion effects and stock footage process shots, in black and white, in the 1950s, by Roger Corman. And yet, even discounting nostalgia, Teenage Caveman is still the superior film about what may happen once our civilization on this planet is gone. (And although I just ruined it for you, it does have a twist, decently played.)

After Earth appeared faintly dull even from the trailers, was directed by a pariah of American cinema, and received dreadful reviews, so I was surprised when I walked into such a large crowd (in fact, I vocalized my surprise and annoyance with a fully audible religious expletive). I know now that it did not do well, but at the time, it seemed like it might be a hit. I had expected maybe five or six people at my matinee showing, but there was a packed house. The audience seemed, unaccountably, to respond to the movie, especially the cameo appearance by the Lord of Eagles. I didn’t hear anyone laughing at the parts I did—to name but one example, seriously, there is cameo appearance by the Lord of Eagles.

As I left, I could hear thrilled whispers quoting from the film, adding to the culture’s fund of instantly recognizable lines: “Graviton buildup could be a precursor to mass expansion.”

It's not out on BD for a couple of months, but it's probably best to avoid it, unless the Rifftrax gang plans to make a hat trick out of Shyamalan movies.  And I bet they do.  By October, I have no doubt that I'll be damned glad After Earth exists.  Until then...

P.S. A note as a production design whore: while the look of After Earth is weird and many will find it off-putting if not a joke, I nonetheless really wish it'd been saved for another, better film, because it is highly unique and, yes, kind of bad ass.  Again, in a really wickery sort of way.
Posted by Hunter Allen at 11:48 PM