You win, you revengeful son of a bitch, you win 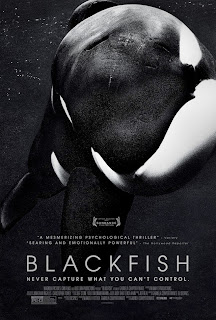 Designed to make you sad and mad, but it's the real shit.

"The killer whale is one of the most intelligent creatures in the universe.  Incredibly, he is the one animal other than man who kills for revenge."  Yes, Blackfish is depressing enough that I had to watch Richard Harris get hunted to the ends of the Earth and murdered there, in order to make the world seem a happy place again.

Unfortunately, the anti-captivity demi-classic Orca: The Killer Whale features a significant amount of real footage standing in for its antagonist.  The real orcas clearly display the fallen dorsal fins which I've now learned serve as the poignant, almost cartoonishly-appropriate badge of their servitude.  No matter how oceanic Orca's cinematographers got that water to look, it must have been shot in a tank at SeaWorld, Sealand, or some other filthy aquatic zoo.

The central story of Blackfish is that of Tilikum, the SeaWorld orca that has been involved in the deaths of three people, the most publicized of whom was that of Dawn Brancheau in 2010.  All evidence suggests Tilikum did this on purpose: Brancheau suffered dozens of discrete injuries of a nature indicative of intent, including being scalped.  SeaWorld claimed it was because of her ponytail.  Another, trespassing nightswimmer Daniel Dukes, was found naked in the morning with his balls "avuls[ed.]"  Cause of death was "drowning."

Tilikum's aggression is not unique, and Blackfish chronicles many other incidents between orcas in captivity and their captors, some fatal. 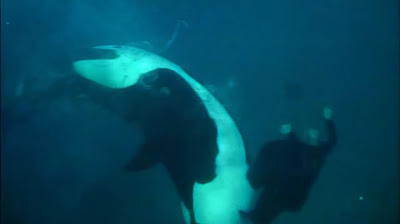 It also shows how that captivity comes about, either from using males like the appropriately-named Tilikum to breed females, or, as with Tilikum himself, snatching babies from their metaphorical cradles in the sea (this is now illegal).  Both processes are vividly depicted in two of the many tangents Blackfish takes (Cowperthwaite is a woman after my own heart).

Regarding the latter, juvenile whale capture, orcas have perhaps the most complex social and emotional lives next to humans, and as families they're even more tightly-bound, mothers and sons staying together their whole lives.  They speak.  "What we call language, they might call unnecessary, or redundant... or retarded," goes one of the more memorable lines from Orca.

After seeing the footage of a whale capture from Blackfish, I have to doubt its veracity, since it emphasizes the orcas' great downfall: the orcas' total lack of any capacity, intellectual or physical, for the written word and comparative lack of ability to convey abstract concepts orally to any great number of their species—orca dialects, even such as they are, are shared only amongst members of particular pods and, one surmises, linguistically mutate rapidly.

A former fisherman who participated in an orca-hunt is interviewed about its mechanics.  The targeted orca pod knew that the humans were there to capture the calves—they had enough "history" to grasp the lesson—so they fled, rapidly devising a cunning plan.  They separated into two groups, the first a decoy with only adults which led the pursuing vessels into a cove, and the second mothers and calves diving and swimming for the open sea.  Unfortunately, the Wrights and Marconi were humans, not orcas, so planes spotted the targets, and radios revealed the ruse to the crews on the boats.  Language means that when humans go up against other animals, the animals can rely only on themselves, but humans can rely on the labor and discoveries of every human who has ever lived. 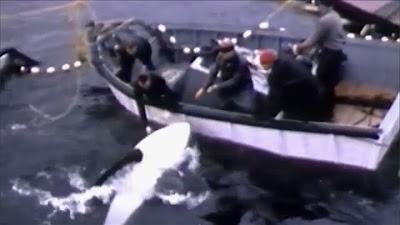 A trillion against twenty doesn't seem like a fair fight, but that's life.

The fisherman alludes to some of the human debris he's seen in his life, but decides that the orca hunt was the worst thing he'd ever been a part of.

Yes, Blackfish is heavily biased toward the idea that orcas should not be imprisoned for our amusement.  Its lack of balance is somewhat unavoidable.  SeaWorld, one of the few parties deeply invested in the continued captivity of orcas, declined to participate—but given the obvious accusatory tone of Cowperthwaite's documentary, one cannot imagine why they would have wished to.

Tilikum's life at SeaWorld might have been better than his life at Sealand of the Pacific, his previous habitat.  There he was kept, sometimes 16 hours a day, in darkness and in close confines with other orcas from different pods and where he was tormented both by endless boredom and aggressive "raking" by his cellmates' 48 teeth.  It was certainly better than the year he was kept alone in the rusty water in the hull of a ship, which the film does not detail for reasons inadequately explained by Cowperthwaite in the linked interview. 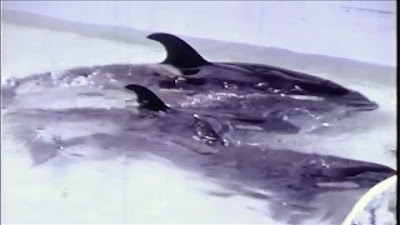 Close quarters are, however, still a feature of SeaWorld's holding tanks.  Another orca, Kandu, attempted to ram a co-captive and, when she missed, she bashed her own brains out on the tank wall.  Further, boredom, if not an outright hatred of their cages, is so intense that they chew on steel bars, breaking teeth, necessitating dental surgery and a permanent hygiene regime euphemised as "superior dental care."  (Given how neatly this nasty stuff fits in with the documentary's themes, it's really unclear why Blackfish does not explore it explicitly.)

The fact that such aggressive and self-destructive behavior manifests, and with such outcomes, suggests that the orcas don't, you know, like being there.  That they also have significantly reduced lifespans despite being exposed to presumably fewer physical dangers militates strongly that harm is being done.  And when they intentionally kill humans, it is hard to escape the conclusion that what is being done to SeaWorld's orcas is an ugly, unconscionable thing.  But against whom?

There is a curious cognitive dissonance at work throughout Blackfish's many interviews with former SeaWorld trainers.  Nothing they've done is universally considered quite reprehensible (yet), let alone presently illegal, so there is no overt caginess or evasion to their stories: they are dutifully ashamed of their complicity with SeaWorld's treatment of Tilikum and other orcas and tell all they can.  Simultaneously, they eulogize Dawn Brancheau with glowing praise.

But either Tilikum's imprisonment is evil, or the death of Dawn Brancheau is a tragedy.  I'm not sure both can be true.

To be clear, I don't think it's a good thing Brancheau died.  I emphatically believe it's a bad thing that she voluntarily put herself in a position where she was a logical and proximate outlet for Tilikum's frustration, and that society and her employer taught her that what she was doing was either morally neutral or even praise-worthy.

See, even I find it easier to blame ignorance and a faceless corporation.  It is SeaWorld's fault; they were following orders.  The fact is that for the most part whatever qualms the dissident trainers relate to us appear not to have manifested until after Brancheau's death, that is to say, when a human—and one of their own—had died, and when SeaWorld, by fighting the OSHA trainer safety investigation, had made implicitly clear their disregard for human as well as cetacean life. 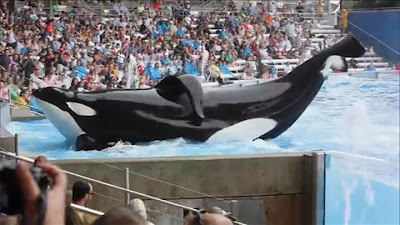 SeaWorld: "What could possibly strike you as unsafe about working with a six-ton apex predator?"

They make justifications.  One claims that the only reason he continued to work at SeaWorld was because he understood how wrong the situation was (and remains), and he was best-situated to help Tilikum.  He doesn't mention at all that the crowds orca captivity brings to SeaWorld paid his bills.  This is how bad systems perpetuate themselves.

So when you're a free man, and your boss asks you to jerk off a slave so his semen can be used to sire more slaves, you don't think about how the next guy won't have just the right technique.  You quit. 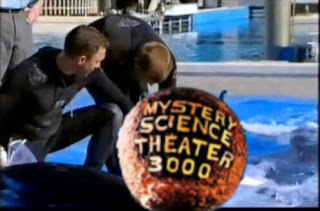 Blackfish: NSFW, unless W happens to be animal husbandry.

The documentary belongs to the whales, but necessarily spends most of its time with the trainers.  As a result, it's preoccupied with the OSHA trial even though that has nothing directly to do with the orcas' plight, and seems to accept their psychological projection at face value.  It's never too late, though, and I'm pleased that, even if the impetus is a painful event, they're finally addressing what's been happening.

Perhaps even because of this odd tension, Blackfish remains a thought-provoking film.  And not just thoughts of how sexually warping it must be, retaining your technical virginity but having been routinely masturbated by members of another species and rewarded with extra fish for ejaculating.  That its material can generate a degree of anger against contrite people who have lost a colleague, and even a young dead person, is testament to its power.

Blackfish's biggest issue as a movie is the crappiness of its video sources for key events (it's often blurry and jumpy—but what else can it be?), but the greatest flaw as a documentary is that it curiously omits many entries to its list of the cruelties done to the SeaWorld orcas, some of them detailed here, as though Cowperthwaite did not wish to overwhelm; but, obviously, it did.

It could not be otherwise: Blackfish's questions go far beyond Tilikum and the other orcas in captivity, encompassing the morality of humanity's relationship with life on this planet.

I realize that is important not to romanticize lower life forms—the epithet used without irony—and especially orcas.  One of the great unexamined questions in animal rights circles is whether some animals can be considered moral actors in their own right.  It's too easy to just take it as a given that nature takes its course.  Obviously that answer is too pat: the only whaling law nature ever made was, "I have a harpoon and I'm on a ship."  Such law is very rarely broken.

Blackfish features some reasonably brutal footage of how they hunt in the wild—poor sea lion, you never had a chance—and as obligate carnivores, orcas' existence necessitates some level of immorality (not a typo; not amorality).  Going umentioned is orcas' own whaling acumen—orcas have even formed a very effective, multi-generational team with humans to help them kill their fellow cetaceans.  Blackfish does not feature any footage as seen below, perhaps because such imagery is a off-message and detracts from the sympathy for the devils for whom the documentary was made.


At least they were torturing it for scholastic purposes rather than entertainment value.

In any event, Tilikum at least was taken from a resident orca group, who dine primarily on fish.  Still, the sad fact is that some populations of orcas do kill other whales, and are too alien, if not too stupid, to comprehend a moral dimension to their actions and surely cannot be deterred by any laws, Sea Shepherds, or Klingon birds-of-prey.  However, this provides whalers and whale-captors with no ready excuse: we can comprehend a moral dimension to our treatment of cetaceans.  About two or three hundred years too late, we're starting to do so, and Blackfish is an important voice in the conversation that will put the exploiters of sapient beings onto the same list as pirates, slavers, and terrorists: enemies of all mankind, illegal under the laws of Earth and subject to destruction upon detection.

It's as the reverend tells the increasingly uneasy Richard Harris in Orca: when you commit a sin, you're really sinning against yourself.  We should stop.