Anybody in the mood for strawberry daquiris? 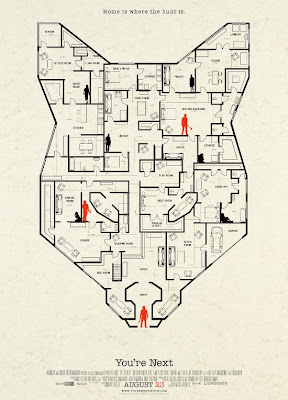 The Strangers 2 sure took the franchise in a weird direction.

"I think that's an unfair criticism" is the single best line in You're Next, and it's also a wholly appropriate caution when approaching the movie for review.  Surely, Adam Wingard's home invader is not at all what I expected.  I almost feel like it's a spoiler to say that this movie has more in common with Evil Dead 2, Dead Alive or even Shaun of the Dead than its most obvious antecedents, because it's been marketed solely as propaganda for the home insecurity industry.

Yes!  I locked my fucking door.

Just listen to that Lou Reed song in the trailer.  Why, this isn't a perfect day at all!  What dreadful irony?  Nothing like that is present in this movie.

Some effective but incredibly cheap loud-noise-sudden-movement jump scares aside, it is not really much of a horror movie.  You're Next is high gore comedy, two parts farce and one part satire.

As an entitled Millennial not dissimilar enough for comfort from the scumbag victims featured in this film, I could easily be annoyed by having my expectations left unmet, but You're Next is so narratively well-built, adept with its themes, and just plain fun that I might have enjoyed it more because I was surprised.  To not even be in the same genre that it's advertised as, and still be satisfying, is a vanishly uncommon feat for a film to accomplish.  The only other one I can come up with off the top of my head is Vanilla Sky.  That's a movie everybody loves and not just me, right?

So I have a justified worry that You're Next's intended audience won't forgive the bait and switch.  (For example, I can direct you to Brad Jones' infuriated review—then again, he liked the new, also stealthly-comedic Maniac less than the old Maniac, which now that I've seen the 1980 movie, really?)

You're Next targets a family of rich jerkoffs, as opposed to all the home invasion movies that take place in trailer parks.  All of these people, I'm certain, have been featured on White Whine at least once.  The clan has reunited at their parents' semi-remote country estate.  They immediately begin bickering, and never really stop, even when people start dying.  The siblings, and to a degree the parents, are extremely, almost inhumanly obnoxious—it would be hard for You're Next to give the audience a bigger grudge against its prospective victims.

Fortunately and wisely, the action begins within moments of everyone sitting down to awkwardly and dysfunctionally break bread.  The heretofore slow pace is reset immediately for frenetic and sustained violence, when the animal-masked home invaders initiate their assault in the most appropriate manner possible: by shooting Ti West in the face.

If The Innkeepers had been this focused, it would have been twenty-five minutes long.

It's more than just the lethal redress to character flaws that we've come to love in our horror movies.  The sibling hyper-rivalry doesn't stop even as they are being murdered: You're Next now becomes much funnier than any ordinary family dramedy.  There are not many movies of that sort where the alpha douchebag brother continues to call his harried kid brother fat after he gets impaled with a crossbow bolt.

Fittingly, the hero does not emerge from this gene cesspool of deserving targets, but from the collection of significant others they had dragged along with them.  Sharni Vinson's Erin is one of at most two relatable, likeable characters.  She's the girlfriend of the other, the younger, admittedly round-faced, and spineless liberal arts professor brother who passes the low bar of being the least offensive use of his father's seed.  The rest make fun of her behind her back for her inferior social class, her career, her relationship with their brother, and her Australian accent.  When people start getting killed, she is the only one who has any idea about how to react, that does not involve either being a crybaby or doing hilariously stupid things.

Thus as the family and ancillary hangers on are whittled down, Erin fully takes center stage as the John McClane of this Home Alone film, arming herself, developing improvised traps, hiding when appropriate, and brutally ambushing the home invaders when she has the opportunity.  While the pampered abominations who populate the rest of the movie flail, her more spartan upbringing has prepared her for a siege.

Its aspirations as an actioner remain somewhat unrealized by not matching strength for strength between Erin and the sometimes easily-bamboozled invaders.  There is one ambush scene involving a strobe light, for example.  This sequence is very well-made, if briefly so literally and physically painful to watch (especially in a darkened room) that it could have come out of a Goddamned Gaspar Noe anti-film.  However effective, though, it is undermined by the fact only a very foolish murderer would approach in the first place.

Kick-Ass has since 2010 been required viewing at Home Invasion University (financial aid available).

(And oddly, this scene takes place in the basement; an earlier line that reads like blunt foreshadowing about not hiding in the basement, because it would be too easy to throw gasoline down there and burn anyone dumb enough to try it, never comes to fruition at all.)

Nonetheless, the invaders are by no means even as close to as inept as those in, say, The Purge, and despite occasional missteps they remain a credible threat throughout the movie.  You're Next would still dutifully scan, even if the contest between Erin and the masked men were all there was.

You're Next goes to the next level.  The story takes some interesting twists, becoming increasingly bizarre and increasingly fun when the invaders are revealed to have a motive that, suffice it to say, goes beyond murder for its own sake.

If there's a downside to all this, You're Next does repurpose perfectly scary elements that would have been much more effective in an actual horror movie.  The totem-headed invaders are a supreme creation of production design that seems practically wasted here. 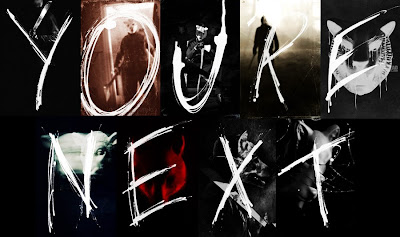 Pictured: complete set of the You're Next letter posters, recalling forgotten pagan deities and conjuring visions of human sacrifice, featuring the zoocephalic trio in a profoundly sinister aspect, such as is not even close to replicated in the movie itself.

Regrettably, if necessarily, each killer in You're Next has twice the lines of all the killers in The Strangers.  They also, eventually, unmask.  The camera's initially shy to specify them as mere men instead of monsters, but it does it after only a few moments.  I can't fully explain why without profound spoilers, but this is a mistake regardless of the movie's darkly jovial tone.

"Why can't we pick our own animals?"
"Because you get four guys fighting over who gets to be Mr. Wolf.  I pick.  You're Mr. Lamb."

Further, in its zeal to present rich people as either useless or vile (or both), I think it buries the lede.  There is something a bit more universal than venality to the villainous plot in You're Next, but it's never made exactly explicit, when it needed to be.

Finally, everything was set to tie the plot threads off with an astonishing ultra-twist that would have catapulted the film into a position as this century's The Usual Suspects, but they just dangle there, maddeningly.  Perhaps this too is an unfair criticism.  But while the ending is neat enough, and may involve more than a bit of biting metaphor, it does struggle with closure.

With these few flaws, You're Next is a commendable effort, and for more than just its vicious sense of humor.  A special mention must be made of the score.  It's a wonderful development in modern genre cinema that scores like this have fully come back into vogue.  You're Next has original music by Mads Heldtberg, Jasper Justice Lee, and Kyle McKinnon that just about equals the great Carpenter/Howarth scores, such as, fittingly, Assault on Precinct 13.

The bloody good stuff is, also like 70s and 80s classics, practical and smeary.  You're Next even features some of this gore as a quasi-realistic consequence for crashing through a window.

"And you're supposed to be the smart one?"

Also, although I am not sure you can actually do that with a blender, I sure did enjoy watching it.

P.S. It's actually more charming for it, but what country is this, Soviet Europe?  Where are all these people's fucking guns?