It wants to hide inside an imitation 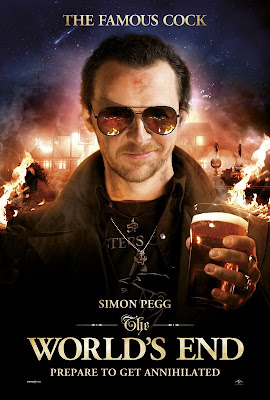 
I didn't even know there was a name for these three movies till the other day.  I certainly hadn't zeroed in on the deep symbolism inherent to a heavy man eating frozen snacks.  In fact, I had no idea what a "Cornetto" was.  But I've seen both of Simon Pegg, Nick Frost, and Edgar Wright's previous cinematic collaborations.  I could not have been more excited for their third multiplex adventure.

This so-called Blood and Ice Cream Trilogy is a trilogy because each entry follows the same basic recipe and addresses much the same themes, and one fully understands going in that The World's End is going to be a rehash of Shaun of the Dead and Hot Fuzz to a lesser or greater extent.  If only it was to a greater extent, this latest Pegg/Frost/Wright joint sure would have been a lot better. 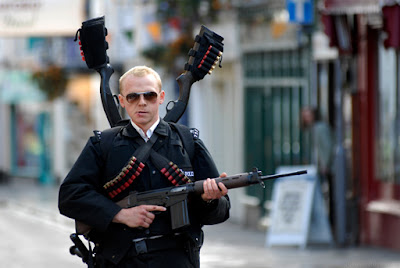 This good?  Probably not, but there was hope.

The formula in these movies goes that Simon Pegg is in some fashion belamed by a harsh everyday reality we can immediately recognize (in Shaun, working in retail at age 29 with no upward mobility or hope; it's a combination of pathological workaholism and dead inner life for the supercop in Fuzz).  He reaches a personal low point (Shaun, his girlfriend breaking up with him because he sucks and is boring; Fuzz, his girlfriend breaking up with him because he rocks and is boring).  Then the bizarre begins to subliminally intrude upon daily life (zombies; a totalitarian cabal), and it is funny because it goes unnoticed by all or most of the cast due to it being hidden behind a Somebody Else's Problem field.  Eventually, it impacts them in a sudden, violent, and often amusing scene (flesh-eating!; murder!).  Genre conventions are examined and scathed, but then they fight the fantastic menace in the fashion dictated by the type of film they're spoofing (bludgeoning and headshots; moving more ammunition than Yuri Orlov).  The audience thus gets not only a deconstructive parody but a reconstructed and superior example of the very genre being targeted for laughs.  Simon Pegg often has emotions about things ("Ed!"; "Danny!").  Finally, he grows as a human being thanks to wacky action sequences.  Jokes are interspersed throughout and they're hilarious.

It's a good formula.  Strike that, it's a great formula.  And The World's End forgets how to use it. 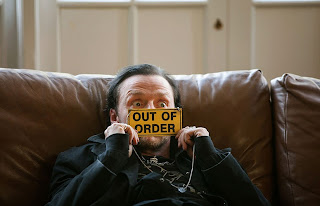 To the principals' credit, it's not exactly through lack of ambition.  Simon Pegg gives us Gary King, his lamest protagonist yet.  If not wholly devoid of a measure of gross charm, he's still actively repellant, a straight-up loser for whom even the characters from "Glory Days" would be embarrassed.  He's, well, to some extent me if I hadn't cleaned up.

But don't count Gary out: he makes up for his personality flaws, as we'll eventually learn, by being a genetic superman, who can sprint for ages and engage in endless melees against hundreds of combatants with no ill effects despite being a 40-something smoker, alcoholic, and Simon Pegg, whom I recall recounting how he almost died from running maybe a half mile on the set of Star Trek Into Darkness.

Two decades after the fact, he cajoles his old high school gang into joining up with him to finally finish "The Golden Mile," a twelve-bar pub crawl they attempted but failed to complete on the last day of school back in, according to the photographic decisions made for the extremely extended opening flashback, The Wonder Years.

These sequences of getting the band back together are the best in the movie, and play rather well.  They're funny, they're engaging, and they have the relaxed pace of Shaun or Fuzz.  There's no hurry; and that's good.

The first couple of pubs make for worthwhile scenes as well, and for all of the best jokes of the film.  Unfortunately, this is where the third most necessary part of the Cornetto formula, the slow but palpable creep of the weird into the mundane, is neglected.  I guess the odd behavior of the townsfolk for whom we have no frame of reference to judge is The World's End's equivalent to military lorries rumbling through the streets or a highly fatal car accident that smacks of body disposal.  If the crazy straw was a nice touch, it's not exactly clear what it was supposed to mean until well over an hour into the picture.

The alien "robots" (oh God, wait, and I'll get to that) just kind of show up in The World's End, and practically everybody that matters in this movie is immediately made aware of their existence.  The reveal arises through the inexplicably, conveniently inhuman treatment Gary's given by some snot-nosed punk.  Because Gary's drunk, a bathroom brawl ensues and Gary manslaughters him.  This moment determines the shape of the rest of the film, either as an extremely dark comedy that retains our interest, or an increasingly dull and nonsensical succession of combat sequences in various boring locales in or around the pubs on the Golden Mile.  Guess which it chooses.

So, by God, I hope you like that first fight scene, because unless you love it so much you want to marry it, you may grow weary of seeing it by the eighth or ninth time.

All the highly choreographed kung-fu you would expect from drunken old people fighting!

Thus, the second most important part of the formula, providing a superior example of genre action, is wholly absent.  The "robots" (I am getting to it) are even more pathetic than the hilariously unthreatening individual zombies in Shaun of the Dead.  Whole armies of them are dispatched with ease because they are slow and stupid and they have less structural resilience than your mom's favorite vase.  It's basically impossible to believe that they could have ever enslaved a town.

You may have gathered from the trailers that they have eye lasers.  Eye lasers would be awesome, right?  You poor sucker.

Even if it were believable, the replacement subtype of alien invasion fiction is not, at least principally, characterized by its physical confrontations; those parts of the movies are often suggested rather than shown because once they happen, it means the still-human characters have already lost.  Maybe this is The World's End's idea of genre satire.  But the whole body-snatcher plot has holes the characters could drive a car through, but for some reason don't.

Actually, the reason is probably that they're inhumanly stupid.

"That's what I love about high school replicants, man.  I get older, and they still have vaginas.  I assume."

There is, I grant, a highly science-fictionally satirical element to the conspiracy, introduced late in the game, that is likely to interest the viewer more than it seemed to interest Pegg and Wright.

But, you say, the most important part of the formula is, of course, the jokes.  Who could give a crap if the SF is a bit weak and the action a little repetitive, if it were funny?  Well, The World's End starts off pretty funny, gets about as funny as any given stretch of Shaun or Fuzz, and then just kind of withers up, kicking out a decent line or sight gag every once in a while.

Partly, I blame the script's unconscionable reliance on two extremely bad running jokes, one of which is cringingly unfunny, but does eventually provide a pretty decent payoff, and the other of which is cringingly unfunny but continues well past nausea through the damned epilogue.  No one has ever dared to make a joke out of the etymology of the word "robot" till now.  Boy, I really wonder why.

Pegg and Wright insist that something like 20% of this comedy is funny because none of the characters are familiar with the word "android."  I am dead serious.

The part of the formula where Simon Pegg has emotions, is, however, given intense focus.  Nick Frost being cast against type as the squarest of the group and Pegg as the irredeemable zero is actually pretty inspired, and the interplay between the two is sharp and tinged with more overt hatred than ever.  It's promising, and there are suggestions that the good old days between them weren't very good at all.  Unfortunately, it only foreshadows a conversation that I expected to be pretty intense but results in a revelation that I would happily bet one American dollar was rewritten to be substantially less dark.

The end is a bit funny, I guess, worth a chuckle or two, but not a hearty laugh.  And that's as good a summation as this disappointing conclusion to an otherwise great set of films deserves.

P.S. Severe spoilers.  Try this: the far better version of The World's End would have involved the ancillary members of the pack—and they are ancillary, sorry guys—being secretly snatched up and replicated one by one, their idiosyncrasies and conflicts being replaced by easier-going Genuine People Personalities.  Maybe Sam does fancy ten minutes in the disableds, yes?  One of the two primaries becomes savvy to the truth, probably in part because a perfectly attractive woman agreed to have sex with him, and tries to tell the other, exacerbating (what does that mean?) their already jagged relationship.  It's certainly Pegg, because if it were the other way around, Gary King looks like he'd believe any old shit and there'd be no conflict.  But finally it becomes apparent even to Frost's Andy, and maybe this is why they don't just leave, because they think they can save their friends.  They use actual subterfuge rather than the fake nonsense kind to get to the World's End at the terminus of their pub crawl, and it is then, and only then, that there is the one big action scene with Frost reenacting Knightfall on a blue-blooded robot and Pegg demonstrating that machinehead is really not better than the rest.

Wait, what's that?  All I did was rewrite Hot Fuzz and change the names?  So?

Shockingly, applying what is basically the perfect film structure would have fixed most of my problems with this big blue mess.


And if you still wanted to send up the subgenre in the climax—and the ending as it stands finally takes a stab at that, I guess, an hour and a half into this parody—maybe the aliens just don't want Gary King specifically.  Last shot of my mental movie? 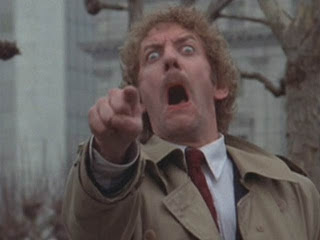