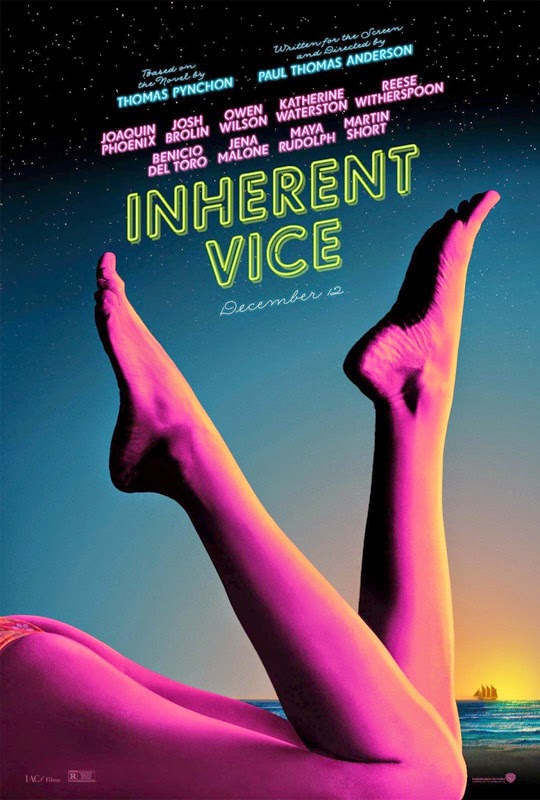 Inherent Vice is a redemption, half-hearted in its way, but it's deliberate and I'm willing to recognize it as such.  (Whereas if you actually liked The Master, that statement doesn't apply: you'll probably just love this movie, and I don't get you at all.)

Spoiler alert: Dave's not here, man (that is to say "mild")

In a record time for this century, he's back: it's Paul Thomas Anderson himself! Yes, it's America's favorite purveyor of bullshit art films, films that make me so angry because I like them far more than I respect what they represent.

Since (at least) Punch Drunk Love, Anderson has gotten deeper into exploring the possibilities of meandering, unconventional structure, off-center, semihuman characters, and cold, observational style, like a dysgenic experiment in mating Coen DNA with Stanley Kubrick's corpse.  With Love it worked wonderfully, thanks almost entirely to how it bent its star's extrinsic persona to its story's needs. But he kept on keeping on because people just outright loved There Will Be Blood, despite—scratch that, because of—how disdainful of the audience it was.  Yes, I like Blood too—but the only reason I can is because I ran across an interpretation of a key scene that rationalizes Anderson's abrasive, mean-spirited choices and forced me to admire the damned thing despite myself.  So: three cheers for filmmaking that requires outside fucking reading to get what you need out of it.

But to give credit where credit is absolutely due, Inherent Vice sees Anderson back away from the yawning abyss he courted with The Master, an acting exercise that had to be shot in 65mm just to fit all of its pretentious dweebery into the frame.  Unfortunately, he's not backing off too far: Vice once again stars Jaoquin Phoenix, King of Awkward Sex Scenes, doing what he does best to close out the film.  (That's not a spoiler, because Vice, like The Master, does not have a plot as such.) Nonetheless, it functions here, and while Vice may not be great, it's (almost) good.  More importantly, it's an attempt by Anderson to circuitously walk his asshole tendencies all the way back to Punch Drunk Love levels.  And for this, I salute him.

Vice is one of those 60/70s picaresques about the counterculture, here centering on and about the character of Larry "Doc" Sportello, an above-average drug user who maintains a more-or-less steady job as a private investigator.  His workaday [sic] routine is disrupted when an old flame comes back into his life, asking him to investigate her sugar daddy's disappearance.  Then other things happen—indeed, a lot of other things happen, enough to (mostly) fill a two and a half hour movie—but they all keep coming back to that woman, Shasta Fay Hepworth.  Eventually, things are resolved, sort of.

You'll note from my aside that one big problem with Vice is that it is very much too long.  No scene is individually unpleasant—most are rather good—but there are so very many of them that one's initial enthusiasm begins to fail as the film begins, seemingly on purpose, to test your endurance.  A truly engaging movie can be two and a half hours without issue or even being noticed—I rewatched Gone Girl afterward and scarcely realized it is yet a minute longer—but Vice bogs down heavily in these expository vomits that eventually go somewhere, but nowhere terribly enlightening or interesting, beyond the point that Anderson once made, with significantly more skill (if at even greater length), about the strange intersections of people's lives.

The bigger problem is that, as a comedy—and it is a comedy—Vice is paced atrociously.  About twenty minutes of set-up pass with hardly any gags, then they begin to come faster, until for a solid twenty minutes toward the end of the first hour, I was becoming convinced Vice was the funniest damned thing from 2014.  Then they dry up like a desert river, dessicated by the hot air of endless talk-talk vignettes about God-knows-what.  It's not the end of all laughs, but you can't rightly call Vice "hilarious" unless you are also high.  I believe this helped a fellow in my audience.

Were one to crassly pitch Vice, one would shout "It's The Big Lebowski meets Fear and Loathing in Las Vegas!" and one would be largely accurate in terms of content.  Yet it lacks the charm, easy humor, and humane benignity of the former—why, the Nazis are Nazis in Vice.  As it veers more toward the latter's territory, then, it cannot commit to anything like Terry Gilliam and HST's bludgeoning slapstick, or their hallucinatory horror, or their critical nastiness.  As a document of the corrosion of the Love Generation, it's absolutely second-tier, and this is the case even with a drop-in from Benicio Del Toro himself... as an attorney, no less.  But he's not playing the Dr. Gonzo role; that is left to Josh Brolin in the film's most overtly comedic and hence best performance.  Good God, can that man eat a frozen banana.

Sadly, this is not a secret sequel to Gangster Squad, but Brolin's super-square cop/actor Bigfoot does remain a perfectly hateful foil to Doc's elevated Scooby Doo antics, and together they make an ecstatically good comic mystery-solving team.  That is probably why they're kept apart for almost all the movie: we must challenge the audience. (Or perhaps this is the fault of the source material; no matter.)

It's a disappointment, of course—like every PTA movie since Love.  But like every PTA movie since Blood, Vice is heralded strongly.  It's one of the best films of [insert year]!  It's a wholly unique [insert genre] experience!  It's neither.  It's fine; and that's fine.  I welcome Anderson back to the fold of directors I don't outrightly fear.  I wish him even better planetary alignments in his future.