Play one wrong note and you die 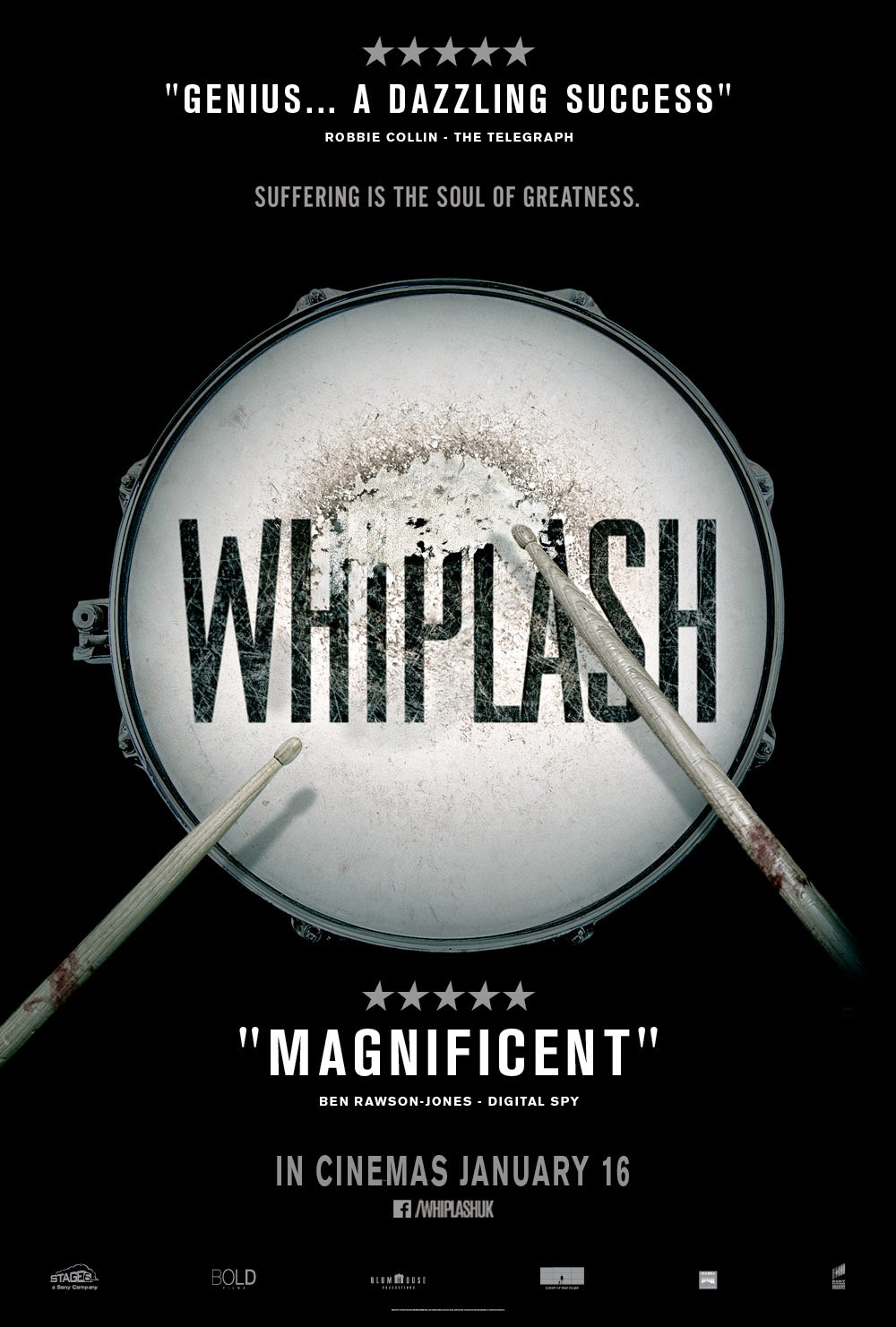 Another film that will make any right-minded human being happy that Damien Chazelle makes movies instead of hitting a hollow cylinder with a stick.

Here's what I know about Damien Chazelle: he truly loves music.  He is in love, particularly, with the idea of musicians playing with superhuman skill, and clearly fascinated by what motivates them to acquire those skills and push beyond their limits.  However, he loves—and he hates—the idea of artistic perfection.  And he outright despises, yet remains compelled to understand, the bullying form of criticism that some artists internalize, conceiving nearly-impossible technical perfection as the only thing that could ever justify their artistic efforts and, therefore, their very existence.  Probably coincidentally, before he became a screenwriter and director, Chazelle was a failed musician.  Why—do you think it shows?

Chazelle also wrote another of 2014's leading pictures, Grand Piano.  Whiplash is practically a remake in a different register, the key differences being that Whiplash is more essentially a melodrama, and that Grand Piano revolves around (you guessed it) a piano, instead of a set of drums.  I can only assume that the surprisingly routine failure to make the easily-drawn parallels arises from the fact that far fewer people have seen Piano, which is really a shame.

It's also odd, given that Grand Piano was offered to anyone on Earth who wanted to see it, whereas Whiplash was kept cloistered, only getting a wide release on the heels of its Oscar nomination.  In any event, this weekend I finally got the opportunity to view one the few movies remaining from last year that I found myself actively and enthusiastically anticipating.  (The other two, Boyhood and John Wick, are my fault for missing.)  What I saw Friday night may have its faults—but to what extent you may find Whiplash to fail, if you find it to fail at all, is purely a matter of taste.

Chazelle's extreme gestures—and Whiplash can be described, faithfully, as an 107-minute succession of increasingly extreme gestures—could easily alienate a literalist viewer.  The film quickly abandons reality for writerly contrivance, if not full-bore (if unacknowledged) fantasy. Meanwhile, as a depiction of musical education and jazz history, it evidently warps the true facts to the point of defamation in order to suit its themes.  This too could alienate the literalist, and especially annoy the aficionado, but to view the film through the aficionado's exacting lens comes close to a willful exercise in point-missing.  Of course, if you seriously dislike jazz—or if you find yourself wary of drum solos, of any genre—you might well find Whiplash nigh-unbearably awful.  (But this last warning is the most unnecessary of all, for you can say basically the same thing of any musical.  Personally, while I'm the furthest thing possible from a jazz fan, I rather enjoyed what I heard here.)

As far as living up to its impossible hype, Whiplash is one of the most extraordinary films of 2014.  Arguably it is the most successful version of itself it could ever possibly be—give or take a sequence involving a rental car, and despite myself I couldn't stop myself from liking that incredibly silly part, too.

Whiplash is the story of two men—and I cannot emphasize that strongly enough, because although there are more than two actors with speaking parts in Whiplash, even the script points out they are not there to matter.  One of these men is 19 year old Andrew Neimann.  He's a drummer, obsessed with jazz drumming in the same way that many serial killers are obsessed with women, and obsessed in particular with achieving (or surpassing) the physically-punishing freakshow technique of his idols.  He's enrolled himself at the Shaffer Conservatory, the fictional best music school in the country, a prodigy now thrust into a milieu where his innate talent is no longer enough to make him special.  We first see him working on his speed drumming, and avoiding a party so he can listen to more speed drumming.  We won't need to be told later that something human is missing from this young man, having been replaced with the drive to succeed.

Stalking the oppressive hallways of the conservatory is the man who will become Neimann's mentor—and tormentor—Terence Fletcher, the R. Lee Ermey of Jazz.  Hence Fletcher is also the man who would have been fired decades ago for the sexist, racist, and homophobic flourishes of his batshit insane pedagogical technique, shortly after being jailed for the physically abusive component of his regime.  As I intimated above, Whiplash is not so heavily concerned with realism that it would sacrifice the sheer intensity of its central characters: Fletcher brings Neimann into his competition band, and one of the very first things he does is throw a chair at his head.  Fletcher seems disappointed that his pupil's attention was insufficiently directed toward his drumkit that he managed to duck.  Then he teaches him tempo by slapping him repeatedly in the face.  Neimann learns it.  Whatever greatness Neimann does achieve, in the end, really is thanks to the emotional destruction he experiences at Fletcher's hands.

That's where Whiplash twists rather than turns.  Fletcher, though truly presented as unalloyed evil, is (maybe) also a necessary one.  This is the talking point to have come out of Whiplash: given a chance to explain himself, Fletcher says that "the two most dangerous words in the English language are, 'Good job.'"  There's a resonance here for me personally, having been in an equally-hypercompetitive, equally-useless scholastic environment myself—namely law school, where "good enough" was never, ever going to be good enough, even if we unwisely convinced ourselves otherwise.

Would I have benefited from having a chair thrown at my head?  Perhaps.

Like law school, maybe like all school, the Shaffer Conservatory isn't about education, it's about sorting—Fletcher wants the next Charlie Parker.  It doesn't matter that his students are humans.  It doesn't even matter that his students are tuition-paying customers, or that he's a professional with a fiduciary relationship to his clients.  (Ha ha!  Just kidding—that is emphatically not the state of the law in New York.)  He'll take these kids, and break them over his knee, until he finds the ones that won't.  But almost all of them will break, and they'll have wasted themselves on the altar of adolescent vanity and naive ambition.

Insofar as the condemnation of the Special Snowflake Society is the most obvious aspect of Whiplash's program, it's also what's been most fervently discussed—and, indeed, it's for sure a discussion worth having.  But taking Whiplash's villain's pronouncements at face value is, needless to say, slippery work.  Whiplash has drawn very severe critiques from those who weren't swept away by it, for it offers a seriously narrow and misrepresentative view of jazz in particular, and of collaborative art in general.  The thing is, those critiques are not wrong, only their critical framework is, because Whiplash is hardly at all about talent being honed by any means necessary, and how this is awesome.  What I saw in Chazelle's film instead was the consensual creation of a hermetically-sealed dystopian universe, where its kind of poisonously competitive spirit could find purchase.  (That the war of all against all commanded by exploitative beasts presented by Whiplash's narrative just happens to also reflect the overpopulated economy of late-stage capitalism is probably accidental—but provocative all the same.)

Consider our hero, Neimann, the monomaniacal, increasingly egomaniacal loner.  He eschews not only collaboration with bandmates, but social relations of every kind, sacrificing family and friendships for his art.  (Meanwhile, he is engaged in the rote, mechanical regurgitation of beats.)  He is tasked by a cruel taskmaster to correct mistakes almost no one can perceive, in order to achieve greatness in a musical genre almost no one cares about.  The subject of Whiplash isn't the glory of achievement, but the masturbatory, nihilistic pursuit of that achievement, revealed as the ever-quickening race to nowhere.

It's sick, it's twisted, and it's given life by Teller and Simmons' ecstatically heightened performances.  Simmons stands out as essentially pure evil, conjured in a form that contrasts a conductor's grace with sinewy physicality, and always magnetic in this contradiction: despite his thuggish verbosity, it's imaginable that one might still submit to his perversities.  Teller is less flashy, but maybe better, as the implosive student; and I am never unimpressed when an actor picks up enough technical skill to realize onscreen daunting physical movements like Neimann's virtuoso drumming.  (Paul Reiser as Andrew Neimann's father deserves special mention, too.  Reiser recedes into the background, providing a baseline humanity with which to compare the two leads.  But Whiplash gives Reiser one perfect moment, and he nails it.  His last shot, where horror and pride mix together in a way that Jim Neimann is completely unequipped to process in that moment, is certainly some of the best work of Reiser's career.)

The only thing that could have stopped Whiplash from being a masterpiece is if it were didactic and dull, and those are adjectives it scrupulously and tirelessly avoids.  When I said that Whiplash recapitulates Grand Piano in a different register, I really only mean that there is not a fortune hidden in Neimann's drums, and that no one literally gets their throat cut.  In terms of filmmaking, I wonder if it's chronologically feasible that Chazelle was influenced by Eugenio Mira, Piano's director.  Either way, though Whiplash does not embrace sheer spectacle in the manner of Piano, Whiplash is most superbly made, between the ultra-tight editing, compositions to heighten the pressure already inherent in the script and performances, and revealing close-ups such as God might have chosen were He making a movie about asshole jazzmen.  Thereby Chazelle's assured direction generates the exact same kind of atmosphere as Mira's far more clearly-cut potboiler.

Whiplash's thriller bona fides go beyond its visual language.  True, Chazelle's script for Whiplash is far more willing and able to explore the questions it raises about art and ambition—whilist offering, if only sarcastically, the exact opposite of the conclusion reached by Piano.  But Chazelle never forgets he is making a movie, not a screed, and that his first duty is to entertain.  Thus does Whiplash indulge in preposterousness even purer than Piano's, in order to keep the adrenaline up.  Whiplash's finale, one of 2014's most satisfying and shocking endings, is also one of its most insane and unrealistic.  Yet it is entirely of the piece—as Whiplash crosses from high-pitched melodramatics into crazy thriller mechanics, it remains rooted unshakably in the truth of its characters.  In its closing moments, Whiplash reveals itself as what it always was, beneath the music, beneath the rhetoric: a love story, shared between monsters who deserve each other.