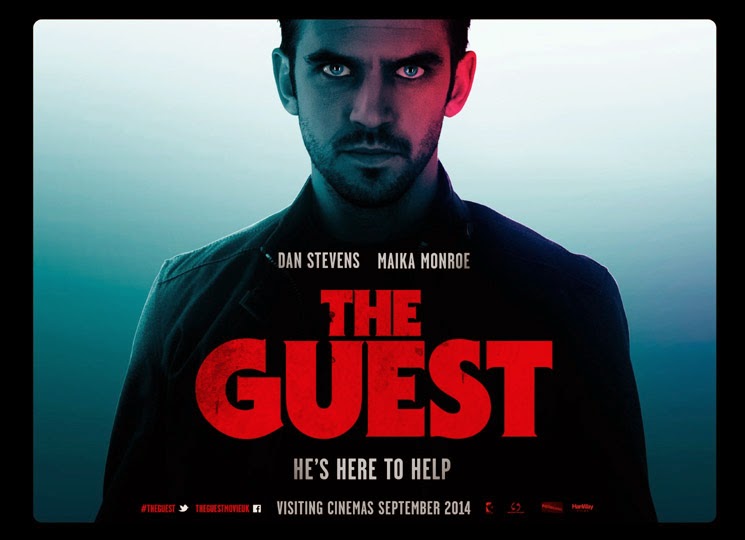 Rarely has the better been more obviously the enemy of the good enough. 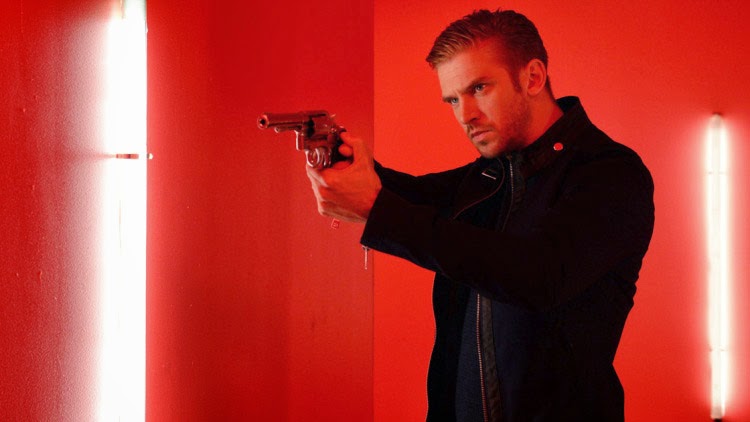 Simon Barrett is becoming one of the most frustrating good writers I know.  His process, it seems, is to take a standard generic idea, give it its own independent life, infuse it with a dark humor, and twist it up in the middle so that it doesn't seem boilerplate at all... before contenting himself with playing out the rest of it so straight that you can't help but recognize the waste in the end.  Take his most recent feature: no fewer than three better third acts present themselves, each of them so patent that you'll be considering them even in the midst of watching the one to which Barrett commits.  Truly, Barrett does take the one idea he feels like tackling as far as it can go, but that idea wasn't built to travel very far, since—after all—it's the same concept we've already seen, here and elsewhere, only now with some suitably unique and bitchin' set design.

Meanwhile, despite a name and a beard that would suggest that he'd be more at home in erotic literature about pirates, there is Adam Wingard.  And Wingard keeps elevating his partner's mere adequacy to levels that—at turns—approach the sublime.  This is what happened in the pair's last effort, You're Next, an exquisite melding of home invasion horror and 80s badass cinema that was only a few surprises away from something like perfection.  This is what happens in their follow-up, The Guest, which is Shadow of a Doubt with explosions, although Wingard has described it as Halloween meets The Terminator.  And that's probably at least as accurate, for better or worse.

But if You're Next was already an homage to JC himself, The Guest is moreso, representing in all its essentials something close to what John Carpenter would have done with the same material, except I have every faith that "Martin Quatermass" would've rewritten the ending to have been vastly more satisfying.  The other difference is that the polymath genius of the 1970s and 80s didn't need to refer to the specter of Nicolas Winding Refn about his soundtrack choices, because Carpenter—with occasional assistance from Alan Howarth—wrote his own music.  (And in case you missed it, his album drops next month.)  Yes, Wingard tries hard to do what Carpenter once did with ease, but we can absolutely appreciate the effort.

Arriving out of the blue sky at the Family Peterson's rural New Mexico home is David Collins, or so he says.  He claims to have known their son, whom they lost long months ago to one or the other of America's poorly-fought foreign wars.  Laura Peterson is the first to meet David—and out of some combination of hungry grief, ordinary hospitality, and soldier worship, she asks him to stay.  Though her husband, Spencer, her other son, Luke, and especially her daughter, Anna, have reservations, in turn David neutralizes their objections.  Of course, all is not as it appears.  As the title card made emphatically clear twenty minutes earlier—and as the bottom falling out of the score in between hard cuts makes clearer still, in case you weren't paying attention—The Guest is not a probing interpersonal drama, but a high-test thriller.

As Joseph Cotten before him, the camera lingers on Dan Stevens more than his hosts.  We see the lights go out in his eyes, and we can intuit that his good manners are the affectations of a madman.  As Teresa Wright before her, Maika Monroe shines with human perception, unable to intentionally blind herself to what is rapidly becoming plain for all to see.  (And, just as some guy whose name I've forgotten before him, Lance Reddick appears out of the clear blue sky, fucking up this classic game of cat-and-mouse by introducing a dog—and a toothless one at that.  Truthfully, Shadow of a Doubt might've been Hitch's personal favorite, but it ain't perfect.)

Either way, let's credit these performances, or at least the first two, for as on point as Wingard is, Monroe and Stevens are operating in a register altogether flawless.  Without Stevens' expressive inexpressiveness in particular, it is hard to imagine The Guest functioning at all.

Where Barrett twists the formula is that this interloper genuinely means no harm to his adoptive family—quite the opposite.  Instead, David means harm to all who stand in the Petersons' way.  Even by the end, as far as we can discern, what he said about his friendship with the eldest Peterson child is true, and that in some fashion he really is trying to keep his promise to the dead soldier.  He ordinarily shows his affection for the Petersons through violence, but the benefits are sometimes quite hard to argue with.  Unfortunately, this is where Barrett meets the fork in the road and he makes a hard left: soon enough, of course, we are whisked away from Mexico to an imposing governmental facility; exposition is delivered, confirming what even the least-attentive audience member already knew; and finally the worst-led blackout team in cinema history shows up without any subtlety in their intentions, nor even any apparent plan.  The delectably bitter moral choices The Guest had heretofore grappled with, as well as all its thriller entertainment, are left to spoil.  In their place, albeit with some interesting grace notes, what we get is the ten thousandth riff on The Implacable Killer Who Cannot Be Stopped, But Must Be Stopped and How.  (Despite a stunning Terminator 2 reference still to come, it is precisely here that The Guest abandons its attempt to depict the sickly twisted version of that family dynamic.)

If it's a riff, though, it's nonetheless an entertaining riff (and this is still the case, even if The Guest's first big shootout is, all things considered, barely worth having at all).  This is all thanks to Wingard; but, to be more precise, it's thanks to Robby Baumgartner's precise melding of contemporary cinematography with the aesthetic markers of the high 1980s' lighting and filmstock.  And it's thanks, as well, to Wingard and Jonathan McHugh's canny soundtrack selection, whether it lives up to Drive or not, and special credit goes to composer Aaron David Ross for his Carpenter-Howarthian "additional music."  And, of course, The Guest's single most valuable behind-the-camera player is production designer Thomas Hammock, whose faux-cheap design for the final set-piece utterly steals the show—rural New Mexico this may be, but that doesn't mean that a public school can't drop at least $50,000 on the most bad-ass Halloween dance in history. 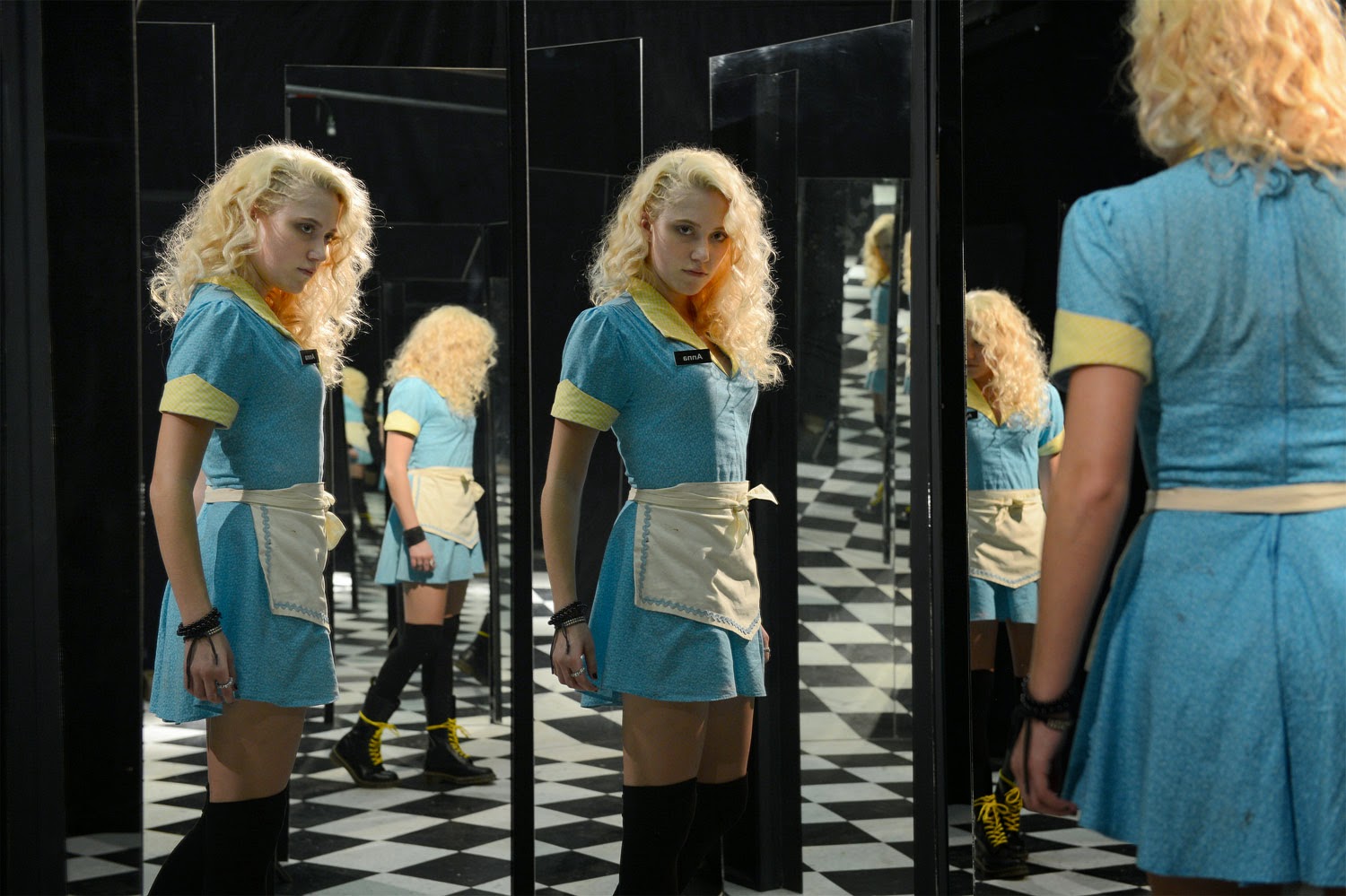 This image means exactly jack-shit, though, except insofar as "pretty" justfies itself.

Oh, how does style repave such a well-trod path as this one.  The Guest eludes greatness like it's actively terrified of having anything to say, or even of being terribly satisfying as an object.  It refuses to be interesting on any level other than acting acumen and pure cinema for the last half hour of its runtime.  Is that "good enough"?  Perhaps it is, after all, significantly better than merely "good enough."  But for as long as I shall remember Wingard and his cast and crew's greater efforts, they shall sadly remind me of Barrett's lack of imagination, too.