Only a crazy man would own a rocket! 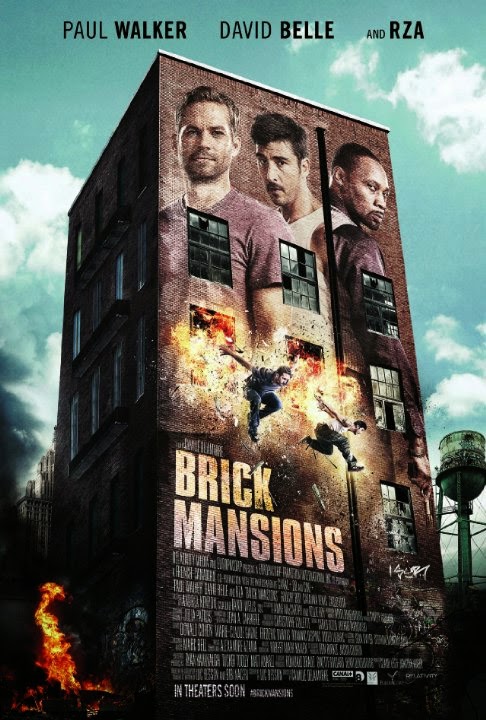 One of the benefits of having no pretensions to taste is that I can say without shame that for large chunks of the first hour of Brick Mansions I thought I might be watching a seriously great little action movie.  Don't get me wrong—this, in itself, was shocking.  I don't think think anybody would ever say, "I simply assume Brick Mansions to be a great movie."  And in the final analysis, it isn't anything even close to great.  But that doesn't mean we get to write it off entirely.  I don't know exactly when my own bemused giddiness took hold—but certainly it was in full force by the time Paul Walker ripped a steering wheel off with his bare hands, and started beating people to death with it.

Mansions is yet another Luc Besson joint, featuring yet another script in the endless series of scripts that he seems to be compelled to write in time with his bowel movements.  And it is a trashy, trashy movie, of the sort that's made Besson infamous, and in Mansions the cinema du look sub-maestro once again dumpster dives into the worst excesses of his own 13 year old self's id.  On the other hand, it is never once boring, and in this regard it towers above Besson's recent directorial efforts, Lucy and The Family.

It can't hurt that Besson is adapting Besson, from when Besson was any good—in case you're somehow unfamiliar, Brick Mansions is a remake of storied French action film B13, which as near as I can tell was a remake of Escape From New York, except with a bomb instead of a president, and parkour instead of clumsy 80s-style brawling.  In any event, Mansions is pretty much that, with added Robocop flavor—the major apparent distinction being that the RZA's involvement required contorting the ending into something even the unreflective 13 year old that brought us The Fifth Element wouldn't write.

The story goes like this: in the future, the slums of Detroit—the titular Mansions—have been walled off by the government, reducing half the city to a Third World hermit kingdom ruled over by master criminal Tremaine and his heavily armed gang.  Tremaine's only internal opposition is parkour enthusiast Lino, who might be less of a problem if firearms functioned in this disturbing universe, though luckily we have ample evidence that they do not.  On the outside, supercop Damien plots Tremaine's downfall for his own reasons.  And finally, sinister politicians and real estate developers covet the land Brick Mansions stands on, and resent its poor, benighted inhabitants.

Now, in a total and complete coincidence, Tremaine has somehow managed to steal an unguarded neutron bomb!  He thus holds the city ransom, as he must, threatening to send the bomb downtown on the back of a missile.  Through enormous and rather implausible convolutions of the plot, largely revolving around Tremaine's kidnapping of Lino's girlfriend Lola, Lino and Damien must team up to save Detroit from itself—insert quarter.  We reach spoiler territory at this point, and I must rest my weary fingertips, though let it be known that the twists still to ensue could be predicted by anyone, even by space aliens unfamiliar with human narrative structures and class antagonisms alike.

But Mansions does have its surprises.

The surprising thing about Mansions is not that it's a reasonably good martial arts movie—David Belle's involvement dictated that from the outset.  The surprising thing is that it is also kind of an amazing action-comedy.  I can't tell you whether this was intentional, however, or at least partly accidental.  True: serious and apparently deliberate humor is derived from the fact that Paul Walker, unlike David Belle, is not in any sense a martial artist, nor for the most part a terribly convincing action hero altogether.  The editors know this by instinct, and they employ a noticeably different style whenever they need to work around Walker's basic humanity in order to achieve a proper dust-up.  Besson's script knows it, too, with many exchanges and set-pieces dependent on Belle being Belle whilst Walker is constitutionally unable to come close to duplicating Belle's effortless feats of strength and agility.  Most gratifyingly, Walker himself knows it, and his performance is a triathlon in alternating between douchily incredulous, douchily annoyed, and—when he improvises solutions that don't involve parkour—douchily smug.  Of course, these were the precise emotions the Walker 2000 chassis was built to convey, and therefore he is honestly kind of great.

Here Walker engages in what actors call "layering": projecting douchy incredulity and douchy annoyance in the very same moment.  (Rest your soul, Paul.  You were enjoyed.)

The reason I can't say that Mansions is a comedy, or at least an entirely purposeful one, is that sprinkled in are some devastatingly unnecessary shots, where director Camille Delamarre pretends that Walker is a badass existing on remotely the same plane as Belle.  In these misjudged images, he treats them as a pair of chop-socky twins, mirroring their sparkly cool movements in shots that are very obviously assisted by movie magic in the form of stunt doubles and CGI.  Of course, they have no place whatsoever in the narrative universe established by every other scene of the film, specifically all the ones where Walker is demonstrably not supposed to have mutant leaping powers.

Not that Delamarre is in any sense betraying the tone here: Mansions is a film that can be described as "passionately stupid," both in that it is stupidly passionate, and it is passionate in taking its stupidity all the way to its stupid, bitter end.  Far more often than I imagine you might suppose, Mansions' stupidity works wonders: Paul Walker delivering a man into police custody by launching him through a car windshield; every last line RZA utters, which I might charitably describe as the brogue of the streets and which I would never seek to ruin by transcription; and many of the lines that David Belle utters in his own monotone (distinct from Walker's in that he has a French accent), but above all Belle's attribution of mental illness to the fellow who has sought out anything so dangerous as a rocket.

And then there are Mansions' problem moments—the big problem moments—where its stupidity bites it square in the face, like a beloved pet viper.  For example, many movies are insensitive enough to threaten the only female good guy with rape, apparently solely because women have more rapeable parts.  And a fair number are willing to be so consistent in that threat as to turn it into a bona fide subplot.  Surely more than a few movies have pursued their rape-happy narrative into a sapphic sexual assault/catfight that could only be putatively "hotter" if it also involved some manner of violent cunnilingus (for, in Mansions, it already involves violent tribbing).  But Mansions is one of the very few movies—maybe the only movie—where the instruction (I paraphrase) "OK, but don't rape her too hard" is suggested to be something like a sympathy note for the archvillain.

And points were taken away.

Oh, but why dwell on such problems?  Hell, there's an essay about racism in this movie that I have no interest in writing, too.  (The short version is: it's okay!  Enough of the gang members are white that you won't routinely confuse Brick Mansions with Black Hawk Down.)   But it's unnecessary to talk about any of that at too much length, for Mansions' sheer dumbness exists outside of time and space altogether.  Behold as weeks evidently pass for one character, when it's very clearly the same afternoon for others!  Now witness Paul Walker and David Belle teleport, all for the sake of a delectably bad joke.

Mansions' fundamental failure is that while on some level it recognizes that it has serious limitations, it is also not smart enough to stay within them.  This means a movie that is, perhaps, far more detestable than anyone might have seen coming; but it also means a movie that is just so much good-bad fun that it's honestly just good—and far moreso than anyone had any right to expect.  You take the sour with the sweet, they say.  In the end, I forgive it.  I think that's the point of the movie.  And a vote for RZA is, after all, a vote for slightly less rape than otherwise.