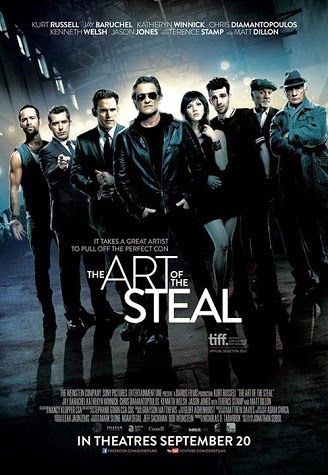 THE ART OF THE STEAL

One of 2014's most oddly-cut diamonds in the rough.

And why is Steal so white?  I do not pretend to know for a second.  You could ask production designer Matthew Davies.  Or you could ask cinematographer, Adam Swica.  I assume they would have to point you right back to writer/director Jonathan Sobol, and I'm honestly not sure if there is a statement inherent to the choice, beyond a desire to communicate his favorite color scheme to the whole damned world.  The monomaniacal fervor with which Sobol pursues his theme of black objects and gray objects on white backgrounds is matched only by the near-incoherence of all the rest of his positively unchecked stylistic bravado.

And, boy, does Sobol hope you enjoy unchecked stylistic bravado.  If you don't like one cinematic flourish, another one will be along soon: Steal indulges in complex splitscreen schemes, meaningless jump cuts, multiple narrator voiceovers, crazy angles, slowwww mooootion, and a cavalcade of freeze-framed, monochromatic character cards that appear to hail from the dystopic alternate universe where Guy Ritchie never became irrelevant.  Topping everything is a silent film pastiche in the middle of Steal, that suggests strongly that Sobol is aware that, in the early decades of the 20th century, motion pictures existed.

But damn the man's eyes (perhaps literally), I did enjoy it. All it took was that throwback, sub-Bassian title sequence, and Steal already had me on its side.  And the silent film pastiche is, in fact, one of the neatest scenes in a very neat film, even if it is based more on the idea of old movies than any evident firsthand experience with them.

No, it's altogether fucking adorable, is what it is.  I adore Sobol's dumbassed ebullience, his sheer willingness to go for broke, to play around like he's not dealing with a big-star cast and a few millions of dollars.  It's like a child directed it, a child screaming "HEY MOM!  LOOK AT WHAT YOU CAN DO IN A MOVIE!" with every gesture he makes.  But he is a child surrounded by professionals, who execute his juvenile vision with professional expertise.  Is Davies' production design good?  Arguably it is sort of terrible—yet it's rather unlikely that I'm going to say that the masterful designer of Hannibal, one of the most lovely television programs of all time, has done shoddy work.  I don't need to: on a technical level, it's effectively perfect.  While I cannot for a moment fathom the reason for it, does it need one?  It is what Sobol wanted, and it is what Sobol got.

With Steal, you get the feeling that someone is simply ecstatic to be making a movie at all, while at the same time bone-terrified he might never get to make another one of this scale again.  Thus, he's taking his opportunity to do everything he ever wanted to do, all in one movie, and the result is one damned thing after another.  Yet the enthusiasm is infectious: as willing as I am to make fun, it honestly does suggest young Guy Ritchie.  It's a kinder, gentler iteration, though—the sort of nasty, wicked crime movie for which Ritchie first earned his fame gets de-gritted and re-glossed in Steal.  No one is going to be fed to a pig here.  Sobol's effort is a very, very old-school caper film, as vivid as Topkapi or Grand Slam, yet more solid and less annoying than either, eager to meld the best of today—well, okay, the 1990s—with a story that could have easily come from the Golden Age.

By that I mean the number of swear words in the dialogue remains entirely comparable to an early Ritchie film.

Being a caper film—indeed a heist film true—Steal wouldn't be anything without its plot.  So, let's get to know "Crunch" Calhoun, our hero.  Laid low by a stint in a Polish prison, Crunch now ekes out a living as a monster truck show's vehicular stuntman (and, yes, the leftover Death Proof washes off very quickly, which is a good thing, since it's best not to be reminded of Russell's sex murderer when he's the noble protagonist here).  Crunch is married to Lola, a woman approximately fifteen years too young to not look entirely ridiculous making out with him.  He's also taken young Francie under his wing as an apprentice and ward.  It's a good life, it seems, but things are not as rosy as they appear: between a case of old man ennui and his unsustainable profession, Crunch isn't happy.  His greatest achievement recently is renegotiating his fee for purposely crashing his stuntbike, thereby satisfying the bloodlust of his show's patrons, from seven hundred bucks to a princely eight.

But, as luck and screenwriting convenience would have it, the old life catches up with Crunch.  He wound up on the wrong side of those Polish prison bars because in his previous line of work he was the driver for a tightly-knit gang of art thieves.  As those title cards seek to sear into your brain, there's the fence, Paddy, the forger, Guy, and the mastermind, Nicky, Crunch's own half-brother—the man who sold him out and put him in prison in the first place.  Five and a half years later, Nicky comes slantwise back into his brother's life.  He wants to say he's sorry—and to give Crunch one more shot at wealth and international infamy.  What other answer could Crunch return but "yes"?  Despite his reservations, none: it is a heist film.  Naturally, he drags poor Francie in with him.

Twists ensue, the first so predictable Sobol doesn't even bother hiding its traces.  But then things get nuts, and it is beautiful.  (One potentially ugly trope is so thoroughly and happily inverted that I was genuinely touched by Sobol's sensitivity.)  In the meantime, an insane heist is perpetrated to perfection; it involves a vagina, but probably not in the way you think.  On the margins, profoundly incompetent Interpol Agent Bick tries to foil the criminals, while the agent's sidekick, imprisoned art thief Samuel, seeking to commute his sentence by working for The Man, withers his nominal boss with dry wit.  And, in the end, this heist thriller cleans up so tidily that you could dine from it.

Steal wouldn't function at all except for its cast, and while a stranger ensemble you'll rarely see, the hell of it is their chemistry is simply perfect.  The closing credits include outtake footage.  Aside from suggesting the overall tone of the piece, it underlines how two of film's most obvious strengths feed into each other: on one hand there is the absolute blast that Kurt Russell is clearly having, and on the other is Jay Baruchel's abject, semi-improvised weirdness.

Everyone is grand, though.  What I may not have properly communicated yet is that Steal is exceedingly funny.  Much of the material is genuinely amusing.  Perhaps more often, however, Steal scores with timeworn gags (Cop: "Drugs?"  Baruchel: "No thanks."), or with deliberately bad gags (you may have noticed its stupid title), or with lines that are almost not really legitimate gags at all (Baruchel: "I have something to tell you!  I like Predator 2!"—and I swear this is actually hilarious).  Talent turns groaners in the script into delights on the screen, and every joke is delivered with such exquisite timing and inflection that it's funny even if on paper it shouldn't be.  To take one last example from Baruchel, there's a scene where Agent Bick is leaning on him and makes the usual threats of prison rape, traditionally my least favorite comedy set-up in the world; then Baruchel finds the exact right register to make it work, responding in honest query without a trace of sarcasm, "Are you hitting on me?"

The humor ribboned throughout the film gives it the precise consistency it needs: Sobol's machinations are far too contrived to be taken entirely seriously, even for a moment.  But thanks to the free-for-all attitude inherent to every aspect of its making, Steal is obviously not a serious film.  It's a frivolous little timewaster, to be absolutely sure—but it wasted my time with such verve and joy, that I gladly surrendered the 90 minutes it asked.  Even with this being the case, no one could argue that Steal fails to adhere to the prime directive of its genre: for all its silliness, there is nothing inefficient about it, and everything returns to the machine of its plot.

The Art of the Steal is one of the most enjoyable films of 2014; and, in its final moments, one of the most purely satisfying, too.  It is not filling; it is not enlightening; it is kind of idiotic.  But it is fun.  Where's the crime in that?