I met a traveler from an antique land 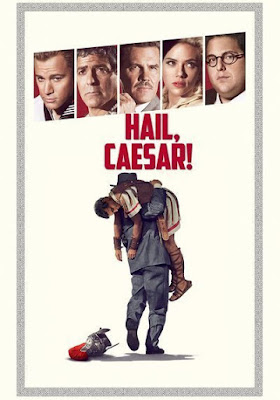 A half-assed tribute hung upon an even more half-assed plot, Hail, Caesar! is still one hell of a fun jaunt through Old Hollywood, and who can argue with fun?  Me, obviously, but I recommend it strongly anyway. 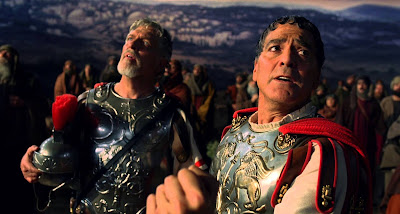 Hail, Caesar!, the Coen Brothers' new film, takes as both its setting and its subject the Golden Age of Hollywood, and there's a contradiction in it—right at the heart of it, in fact—but more on that in a moment.

Caesar tells a story—or, rather, about a half-dozen stories—all revolving around one of Capitol Pictures' mid-level executives, a no-nonsense problem-solver and schmoozer by the name of Eddie Mannix.  This, of course, would be a whitewashed-to-hell-and-back version of the real Eddie Mannix, who was a fixer for MGM, and who may or may not have had George Reeves killed.

So, from this alone, you can see how Caesar has already developed a reputation for being, more than anything, a copious collection of nods to Hollywood history; and while that's not the only thing it is, for that would leave Caesar a wearying, arid slog—and this it absolutely is not—it's very much the case indeed that Caesar is one epic game of spot-the-reference.  It's also been said that the more of these references that you comprehend, the more you'll enjoy the Coens' film.

Personally, I'm not a bit sure that this is remotely true, thanks to that central contradiction I was talking about: because what we're actually looking at here is a film that simultaneously wants to celebrate the film industry's output during the 1950s and 1960s, yet also wants to depict this output as so incredibly dumb, worthless, and compromised that any uninitiated viewer could easily walk out of the thing with the impression that the Coens think that people who watched films in the 1950s and 1960s were the stupidest sacks of shit to ever heft themselves into theater seats—whereas the people who actually made films in the 1950s and 1960s might have been even less intelligent than that.

Much like Mel Brooks before them (indeed, more like Mel Brooks than themselves, really), one of the most important ways the Coens pursue their impulse toward mockery is through a series of lightly-metafictional genre parodies that almost always achieve their immediate goal of being funny, but which also make the product which Capitol spits out, and which Eddie Mannix ultimately defends against Capitol's enemies with a genuine crusader's zeal, look like complete fucking garbage.  Unlike Mel Brooks, however—this being where the two styles part ways—there's only sometimes the sense that the Coens' parodies are in particularly good fun: History of the World, Part I doesn't take a jab at The Ten Commandments because The Ten Commandments sucks, after all; it takes a jab at The Ten Commandments because The Ten Commandments can take it.  Meanwhile, the impression we get of the biggest movie-within-a-movie found in Caesar—also titled Hail, Caesar!, but appended with that telling subtitle, A Tale of the Christ—is one of consummate punching down (except perhaps, right at the very end, when the Coens clearly want to swerve back toward nostalgia, and have a something of a hard time doing it).  I expect the dissonance comes down to the Coens' aspirations to make something bigger than a delivery device for gags, whereas Brooks, naturally, only ever wanted to tell a few jokes.  But by whichever path the Coens arrived here, it's something that winds up hobbling their movie a little bit—especially given that Ben-Hur is, of course, significantly better than most of the Coens' own movies, including the one we're watching right now.  (On the other hand, the Coens' output is typically better than their secondary target, The Robe, even if I happen to like and admire The Robe.  But that's the thing: it doesn't especially help that this particular movie-within-a-movie is shown as being filmed in a boxy ordinary widescreen aspect ratio, instead of the Biblical epic's more typical CinemaScope frame, let alone in Ben-Hur's actual MGM Camera 65.  Yes, this really does bothers me—not solely for reasons of displaying my own pedantry, but because the "celebration" part of Hail, Caesar! winds up all the more obscured, when the Coens can't even be bothered to present an example of the sheer, overweening awesomeness that made the 50s epics so unforgettably grand in the first place.)

And yet I've said Caesar's a comedy.  As such, it's a lot fairer of me to judge it on its payload of laughs, which is—all criticisms aside—quite huge.  Arguably some of the very best bits are in those detours into parody: take Clancy Brown, for instance, who plays Gracchus in the film-within-a-film, and who steals the whole show every time he gets to say a line with his amped-up impression of the occasionally-abominable earnestness that made those Biblical epics so ripe for this exact kind of mockery.  And maybe it's too much for me to say that the Coens demonstrate a disdain for everything the 1950s had to offer—just 50s B-Westerns and 50s epics, apparently—for they show a lot less overt contempt for their lovely aquamusical pastiche, starring Scarlett Johansson in a "fish ass," as well as for their even more lovely send-up of the MGM musicals, featuring Channing Tatum's legendary fleetness of foot.  The latter is frankly pretty fantastic, and although your mileage may vary a great deal when—instead of the joke being "this crap is worthy of our scorn"—the actual gag winds up being "musicals are incredibly, unfathomably gay," I must admit it made me laugh.  But before we turn to weightier matters, even the briefest list of Hail, Caesar!'s great scenes would be direly incomplete without mentioning Mannix' convocation of a Catholic priest, an Orthodox patriarch, a Protestant minister, and a Jewish rabbi.  Convened for purposes of determining if the religious content of Hail, Caesar!: A Tale of the Christ is offensive, this truly ancient set-up leads into the best, and perhaps the only, comedic discussion of the doctrine of the Trinity in cinema.  (And perhaps it helps that it's in this scene—maybe even in this scene alone—that the Coens feel like they're really risking something, and getting away with their transgression, as opposed to simply retreating into a heavily fortified redoubt of smug condescension.) 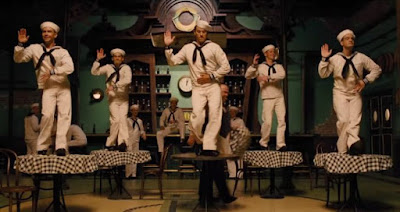 So, if Caesar is funny, ought that not be enough?  Indeed, it must be enough, because it's one tremendously enjoyable movie in spite of its single biggest problem, which isn't even its schizophrenic attitude toward its subject matter, but its plot, which cannot be said to fall into tatters, for it begins in tatters, and only ever makes the faintest efforts toward sewing all these tatters together into some kind of actual fabric.  The Coens, whose films are practically defined by their makers' willingness to go on bizarre tangents, have perhaps never delivered such a completely unfocused movie; why, no less a deliberate narrative clusterfuck than the The Big Lebowski—the very apotheosis of the Coens' easily-distracted storytelling style—still winds up feeling like a cohesive statement of something, even if it's only about the effervescent randomness of life, constrained by its one unavoidable certainty.  As for Caesar, its half-kidding, half-serious reification of the magic of the movies seems all the more unearned.  It's so vignettish it's almost a damned anthology, and, in the end, it does not add up to the sum of its sometimes incredibly well-machined parts.

And, since we've finally brought up the plot, shouldn't we at least attempt a summary of its content? Caesar is perhaps best approached as just another day in Eddie Mannix' life, albeit a very busy one, beginning with one confession to his priest and ending with another (though we're compelled to agree with the Father, when he says, "It's really too much, you're not that bad").  Mannix is stressed; he's trying to quit smoking; he hates his job; yet he loves it too.  That job, of course, is to wrangle Capitol Studio's unruly legion of talent—from pregnant actresses, to cowboys who can twirl a lasso with aplomb but can barely recite a sentence, to the star of Hail, Caesar!: A Tale of the Christ, a buffoonish drunk whose kidnapping kicks off what might well be termed the "A-plot" of the film, this being my way of getting in a subtle dig at Caesar, which for a movie about movies, sure feels an awful, awful lot like the two-hour pilot to a new TV show.  (And one whose greatness is still only potential, rather than demonstrably proven, at that.)  In the midst of his regular duties, however, Mannix has found himself tempted by an importune, cigarette-dispensing demon from outside Hollywood, who wants him to come to work at Lockheed—and, more generally, in "the real world" (crassly represented here, by a photograph of a hydrogen bomb going off).  With the way things are going at Capitol, it certainly seems like an easier life.

But, of course, the more active antagonists of Hail, Caesar!—to the extent a film this sprawling can be said to have "antagonists" in the first place—turn out not to be American aeronauticists, but your bona fide reds under the bed: a group of disaffected screenwriters, driven by Lenin's ghost to undertake an act of industrial sabotage, namely snatching that aforementioned buffoonish drunk, Baird Whitlock, off the set of his movie.  (And even two days later, I'm not remotely sure that so blithely exploiting this dark chapter of film history was a good idea.)  Nevertheless, the kidnapping is the closest Caesar comes to a properly filmic narrative—it even manages to intersect briefly with the cowboy's story, which itself is the closest Caesar ever gets to lassoing its own loose ends into anything approaching a neat, digestible package.  It also leaves Caesar with a certain progressive thesis.  But we find this thesis quickly annihilated by its antithesis, which is—as near as I can tell—"Enjoy a spectacle for itself."  As someone who's already sympathetic to the Sullivan's Travels argument—that film's purest and most important function has been and always shall be to entertain—I still would've preferred that the Coens matched their loftier assertions with an actual story that could really bear the burden of that particular philosophical statement, rather than what amounts to a mere collection of illustrative scenes.

The true annoyance of Caesar, then, is that it comes so tantalizingly close to doing what it set out to do: the one reference that I haven't seen anybody pick up on (though I can't possibly imagine I'm the first) is not to Old Hollywood, but to something even older than that.  It's barely worth mentioning Roger Deakins' cinematography anymore (it's a fine, fine thing, when night falls and the shadows come, and even the daytime scenes are colorful and poppy and pleasantly-warm in ways that Deakins hasn't gotten a chance to do in many years), but it is Deakins who gets to frontload some of the Coens' key imagery here, like those crosses on a movie set, silhouetted by a fake sunrise, or the dutch-angled shot of a shadow crossing the steps of a full-sized Roman temple.  But—above all—there is that half-finished (or half-dismantled) statue of some Roman deity or another, standing unattended on the set, as blunt a literary reference as anything I've seen in ages—and a terrifically effective one, too.  After all, we know, from this distance, that the Hollywood of Hail, Caesar! shall itself very soon be rendered little more than two vast and trunkless legs of stone (or, in this case, plaster), by the collapse of the studio system, by the apocalyptic coming of the New Hollywood.  With this twice-repeated motif, the Coens manage to inch their way into saying something nice and meaningful and elegiac about the Golden Age after all—even when their screenplay, well, kind of won't.