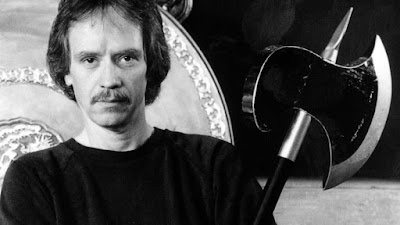 A few closing remarks before we get to the numbers:

Over the past four months, we've had the pleasure (and, sometimes, the pain) of taking the journey through my third favorite living director's entire filmography—along with some essential detours here and there, into his career as a writer and producer, too.  If we're missing some of the more ephemeral things that have his name on them, I think the world will keep turning.  (Or has it stopped spinning 'round, just waiting for my reviews of Zuma Beach, Better Late Than Never, Blood River, El Diablo, and Silent Predators?  The last one's about snakes that bite people!)  No: I think we've done what we set out to do.  Carpenter, we've noted previously, will in all likelihood never make another film.  And you know what?  That's okay too—the man has earned his golden years.

Of course, Jason Blum deserves to be hissed for passing on the horror project Carpenter brought to him in 2014.  And who knows?  Maybe one day we'll even get to see Dead Space: The Motion Picture, a gossamer non-production to which Carpenter has been "attached" mainly in the sense that he helped out with some of F.E.A.R. 3's cutscenes, so we know he has some vague connections in the gaming industry, and that he gave an interview once where he said doing it would be cool.  But hell: stranger things than that have happened in Hollywood, and God knows that the adaptation of the Alien-inspired shooter would be just about the perfect ending to a career that began forty years ago with Dark Star, the Alien before there even was Alien.

Meanwhile, Carpenter is still making music, even if he has quit making pictures.  Check out Lost Themes, if you haven't already.  It's fucking fantastic.  (And Lost Themes II is right around the corner.)

THE FILMS OF JOHN CARPENTER, RANKED FROM WORST TO BEST

Films marked with one asterisk (*) indicate projects which Carpenter helped write, but did not direct; films marked with two asterisks (**) indicate TV episodes.  And yes, in case you didn't figure it out before, I'm obviously not the biggest fan of the original Halloween.  Indeed, I might well be the smallest fan, given the outsized enthusiasm with which its other fans tend to embrace it.

But, like it or lump it, that's my list.  However, if you've got the time, you can find a few more goodies, after the jump.

First, no Carpenter retrospective could ever be called complete without taking stock of his extraordinary scores (often in collaboration with his super-talented musical partner, Alan Howarth).

Let's forget for a moment that Carpenter is probably the greatest motion picture composer short of John Williams, Jerry Goldsmith, and maybe a few other classical film score composers; let's forget, too, that if Carpenter isn't the single greatest composer of electronic scores in the business, it's only because Daft Punk's sole data point of TRON: Legacy slightly edges out Carpenter's top effort, and as far as the depth and breadth of a career goes, it's not doing too much violence to the word "best" to just give him the title.  But, seriously, let's forget all that.  I just want to remind you that John Carpenter is, as far as I know, the only film director who's ever lived to actually be considered a genuinely important musician, and his impact on the world of electronic music is incalculable.  But, hey, incalculability aside, let's throw some more numbers around anyway, along with a little further commentary:

THE FILM SCORES OF JOHN CARPENTER, RANKED FROM WORST TO BEST

Long-time readers know I don't hold fast to strong versions of auteur theory, but for some directors, there's just no mistaking their pet themes and all their silly narrative peccadilloes, and with Carpenter—man—they are just right out there in the open: sleeping evils; apocalyptic endings; isolated communities in their uncanny, depopulated little worlds.  So, for a bit of fun, let's try to quantify the most Carpentery feature films of them all.  (And, for the purposes of fun, I'm including the two other Halloween films he wrote, but didn't direct; whereas I'm leaving out Body Bags, which was of course only an anthology film.)

20. ELVIS (5% Carpenter)
It's a fucking biopic, and a particularly hidebound example of the form, to boot.  Not Carpentery at all.
19. STARMAN (35% Carpenter)
Concerned primarily with a romance, and made with the avowed intention to try to be more like Steven Spielberg (which itself is strange, given that "romance" is usually the last thing any actual Spielberg movie is about), it's lucky that Starman is even as idiosyncratically Carpenter's as it is.  That's mainly because he relies as heavily upon Jack Nitzche's score as he would upon one of his own, and because of the truly grotesque metamorphosis of the Starman that opens up the film.
18. ESCAPE FROM L.A. (40% Carpenter)
It's a disaster of tone, and very few things could be less Carpentery than that.
17. SOMEONE'S WATCHING ME!  (40% Carpenter)
This one's really more like "De Palmian," right?
16. VAMPIRES (50% Carpenter)
The Western-ish setting and mood go a long way, but since when have Carpenter movies ever been this mean?
15. MEMOIRS OF AN INVISIBLE MAN (50% Carpenter)
The sci-fi underpinnings are there, as is the grab-bag of a plot, but ultimately, this one's better described as "Chasian."
14. THE THING  (65% Carpenter)
Sure, it's essentially a siege movie with a sci-fi twist, and it's a remake of a movie produced by Carpenter's own favorite director, Howard Hawks, but isn't The Thing a little too rigorous and sober-minded for JC?  Note that I bumped it up 5% thanks to that fucking terrible scene with Wilford Brimley and his flying fucking saucer.
13. THE WARD (65% Carpenter)
The Ward is Carpenter's only period piece, as long as we discount Elvis (and Christine, which technically takes place five years before its release), and that means it was never going to be totally Carpentery.  Plus, its reliance upon a bullshit twist ending (however enjoyable you find that twist ending) isn't really a Carpenter move either.  Yet there's something about the half-lark mood of The Ward that's right up his alley.  Maybe it's just that Yaron Orbach shoots it in a near-perfect imitation of Dean Cundey that makes me feel like The Ward's wholly of a piece with JC's Golden Age.
12. GHOSTS OF MARS (70% Carpenter)
A sleeping evil discovered in a siege scenario lifted staight out of an old, unreconstructed Western?  We're getting pretty seriously Carpentery now, but I was forced to dock points for two reasons: 1)the sophisticated narrative structure isn't very Carpentery; and 2)sucking isn't very Carpentery either.  I guess it's pretty Late Carpentery.
11. DARK STAR  (70% Carpenter)
Dark Star was Carpenter's first attempt at a small community isolated by science fiction circumstance; it would be pretty close to 100%, except the palpable rapport between the characters that would be felt no later than his very next film, Assault on Precinct 13, is undermined here by the fact that all the characters in Dark Star all hate each other.  However, it does touch on another of Carpenter's themes, that of the decay of civilization and the entropy that afflicts systems generally.
10. VILLAGE OF THE DAMNED (70% Carpenter)
A remake of a Golden Age SF film is pretty Carpentery, and adding on a pseudo-apocalyptic ending is more Carpentery still.
9. CHRISTINE  (75% Carpenter)
Carpenter's best when he devotes himself to character and concept and iconic imagery, and Christine delivers.
8. IN THE MOUTH OF MADNESS  (80% Carpenter)
Metafiction isn't really Carpenter's bag, but Sam Neill's noirish detective and his neo-screwball interactions with Julie Carmen's girl Friday put it up there, along with the mastery of mood Madness relies on to get its perception-wrecking points across.  Plus, there's a sleeping evil here, of sorts, although I reckon Sutter Cane just dreamed it up.  And obviously, the world actually ends in this conclusion to Carpenter's Apocalypse Trilogy, and that just cannot be overlooked.
7. THE FOG  (85% Carpenter)
The Fog is possibly Carpenter's all-time best effort at creating a believably weird community.
6. HALLOWEEN  (90% Carpenter)
Alongside efficient characterization, Halloween is Carpenter's first and purest exploration of the concept of the sleeping evil...
5b. HALLOWEEN II  (92% Carpenter)
...but Halloween II is a little sillier, which, let's face it, is a JC trademark, too.
5a. HALLOWEEN III: SEASON OF THE WITCH (95% Carpenter)
Having gotten back into The X-Files, I think Chris Carter might actually owe Carpenter and Debra Hill some royalties for this film.  Carpenter didn't direct this one (nor Halloween II), but an unbelievably goofy plot melded to a serious (but not overly dour) mood is Carpenter right to the bone.  As is Tom Atkins having sex with a teenager.
5. ESCAPE FROM NEW YORK (95% Carpenter)
Between its examination of American civilizational decay and the repackaging of conservative fears into a burly, awkward actioner, all of it driven by a pulsing, pounding, slightly sad score, we're approaching saturation levels of Carpenter.
4. ASSAULT ON PRECINCT 13  (96% Carpenter)
Just like Escape From New York—only moreso.
3. THEY LIVE (97% Carpenter)
Probably no film epitomizes JC's politics as well as They Live, and not many of them so thoroughly epitomize "make-it-up-as-we-go-along plotting" either.  In fact, only the next two can be said to exceed They Live in that respect.  Oh, and is the action awkward?  You bet it is!
2. BIG TROUBLE IN LITTLE CHINA (99% Carpenter)
Ridiculous yet brilliant?  Now that's what Carpenter is all about.  It's only not 100% because it's maybe just a little too cunning and sly.
1. PRINCE OF DARKNESS  (100% Carpenter)
Hell, I've already made a list why this is the Ultimate Expression of the Things John Carpenter Likes, but the biggest reason is the union of sound and sight—with, if anything, the emphasis being placed on the sound rather than the sight.

And one more quick bonus list!  Ace cinematographer Dean Cundey was, for about a decade, Carpenter's single most essential collaborator not named "Howarth," and after they had their falling out, JC's films never looked quite as good.  Now, it's unclear what happened, although the gossip-monger in me wants to start a rumor about Cundey moving up the Hollywood ladder, using Zemeckis and the Back to the Future Trilogy as rungs as he climbed toward the pinnacle of Spielberg—only to be thrown over immediately for Janusz Kaminski, and relegated to doing shit like Garfield and Adam Sandler's Jack and Jill.  Well, whatever the cause of their friction, it's a real bummer they never got this band back together.

DEAN CUNDEY'S CINEMATOGRAPHY IN COLLABORATION WITH JOHN CARPENTER, RANKED FROM WORST TO BEST:

Well, I guess I could just go on doing this forever, but all good things must come to an end.  John Carpenter, you were—and you remain—the man.  Thanks for reading, everyone, and I'll welcome you just as sweetly to our next director retrospective series, this time focusing on an obscure little fellow by the name of Robert Zemeckis.
Posted by Hunter Allen at 6:41 PM

Email ThisBlogThis!Share to TwitterShare to FacebookShare to Pinterest
Labels: John Carpenter, true artists are still just pieces of meat like you or I