Steven Spielberg, part II: You know, some places are evil—you can buy them, but you can't always own them 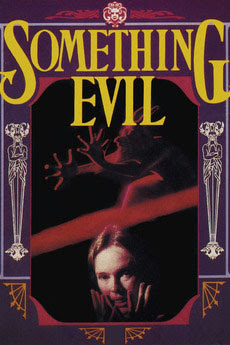 Look, we'll get to the Spielberg movies that anybody besides a film historian might care about very soon, I promise. 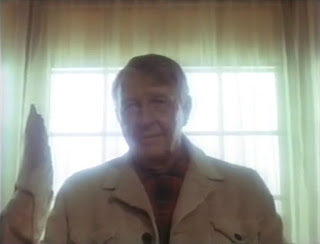 After the palpable hit of Duel, Steven Spielberg did not—at least not immediately—graduate to feature films; for a spell, he remained in the televisual trenches at Universal, turning out two more TV movies for CBS and NBC respectively, Something Evil in 1972, and Savage in 1973.  The latter, unfortunately, has been completely lost to the public, nonexistent outside of some warehouse or other (if it even exists there).

The former, however, is available, through the gray channels opened up by YouTube archivists, and I watched it, most likely because I have some type of sickness.  (My fear of my own completism is intensified tenfold once I consider the truly fathomless depths of Spielberg's extended career.  It is a Pandora's box of some 150 films that I haven't the least interest in exploring in any systematic way.  With this in mind, let it be known that I intend to hold fast to his career as a feature-film director, making only the very occasional foray into his side projects, and only when such things either become unavoidable, as they shall once we hit 1982, or when such things would simply be far too enjoyable to pass up the opportunity to review them, as they surely will when we reach 1985.)

In any event, we'll keep things brief with Something Evil, for it kind of sucks.  Indeed, there are few directorial careers which demonstrate a more pronounced and immediate fall-off in quality than the one that happened between Duel and Something Evil, although we also immediately recognize that this is a ridiculously unfair thing to say, as well.  After all, at this point, all we've really had the chance to do is dissect the output of a TV journeyman who, for the most part, worked on what he was told to work on.  In this regard, it's better for everybody to remember that Duel was, in many ways, an outright fucking miracle: a legitimately great piece of cinema that arose from an unexpectedly cherry script, which Spielberg only lucked into getting, and which he further had the foresight to realize represented a once-in-a-lifetime opportunity to demonstrate his prowess behind a camera.  When it comes to Something Evil, then, there's simply no avoiding the fact that it was only ever just some job he did while he waited for the reputation he established with Duel to pay dividends, probably realizing that it didn't matter that much whether the job he did was good or if it was bad.

Thus Something Evil swings wildly from looking exactly like what you would expect any old dull thing made for early 70s TV to look like—there is a cramped, artless shot of the lead couple in bed that is composed like a bad sitcom director set up the camera—and looking like an actual movie someone might have possibly cared about, although this presumably only arose from its maker's bored restlessness.  And anyway, this discounts the other two categories of shots in Something Evil: the parts that look like a movie, but a really ugly movie, like when Spielberg racks the focus over and over and over, between a reflection in a window and the woman peering through that window; and the parts where it looks like a TV production, but a hilariously cheap TV production, which would include all the scenes where our heroine meets the Devil, who is played in Something Evil by a combination of a wind machine and a whole truckload of increasingly-obnoxious jump cuts.

And that gives the game away, doesn't it?  Something Evil, of course, is a tale of demonic possession.  More specifically, it's the story of the Woldens, a couple who buy a farmhouse in rural Pennsylvania at the insistence of the wife, a craft-minded homebody named Marjorie, even though the husband, an ad man named Paul, works in New York City, which is explicitly stated in dialogue to be two freaking hours away.  It might be worth making a point about how white flight and suburbanization inform character in something like 50% of Spielberg's early films—after this, there'd still be Jaws and Poltergeist yet to come—but, obviously, it's far more because Something Evil is a brazenly perfunctory haunted house film, and, by Jove, screenwriter Robert Clouse was going to get his intended victims into their new and arbitrarily haunted home with the very least amount of effort possible.  That's probably how half of the first fifteen minutes of this seventy minute film wind up comprised of various montages.  One concerns the sale of the house (as Marjorie paints its likeness from afar, which represents just about the only really enjoyable cinematic flourish of the whole film).  Then there's another—it's almost, but not quite, the same montage—regarding the couple and their kids' settling into their new environs (this one's boring and I've already forgotten it).

Almost immediately, Marjorie begins hearing the wordless cries of a baby in the night—and if you hope this particular supernatural manifestation might ever be expounded upon, I'm afraid you hope in vain.  Two neighbors, who seem to know something but aren't willing to tell the Woldens to simply abandon their new property, flit about on the margins, trying to warn them with innuendo.  Paul, of course, could scarcely give less of a shit; but maybe we should cut the man a little bit of slack, given that he spends most of his waking hours now split between driving to work and then trying to find a place to park his car.  Oh, but I rather like the parts where it's clearly deep into morning and long after the sunrise when he leaves home for Madison Avenue—because it lets you know that nobody was invested in making this movie.  ("I've always resented the television medium," Spielberg would say in 1974.  Why, do you think it shows?)

From here, things go on exactly as you expect them to—things continue to go bump in the night, Satan is invoked, and, yes, someone gets their ass possessed.

If you were not absolutely sure of this film's airdate—which is January 21st, 1972—it would be entirely impossible not to believe that Something Evil represented ABC riding a pre-existing fad.  And guess what?  You'd be right: between Roman Polanski's Rosemary's Baby (released in 1968) and William Peter Blatty's novel The Exorcist (published the previous year) there's hardly any denying that this grubby piece of work is naught but a cash-in.

But let's take a wider perspective, shall we?  Spielberg would go on to become one of the greatest masters of horror in cinema—and definitely the most unsung.  You have such luminaries as De Palma and Carpenter—great filmmakers both, each of them right behind Spielberg on the list I happen carry in my pocket of our very best living directors—but they actually get their due, even though they did so many other things besides horror.  Perhaps the difference is that Spielberg, who essentially rejected horror as he moved into his Incredibly Important Storyteller phase, doesn't actually want his due.  As a result he's been very successful in framing the discussion of his works away from the pitch-black excesses of his early career.  Instead, he made action-adventure movies; he made kid's adventure movies; he even made movies about the kind of spacemen you'd rather hang out with than your own children.  But, yes, he also made horror movies, and horror, in fact, was his absolute niche.  From Duel through Jaws to Poltergeist and Temple of Doom he put his signature on some of the finest and the most disturbing images in all horror cinema.

And all this means that you'd really think Something Evil would be so much better than it is, even within the confines of TV content restrictions—and, hell, maybe that's the problem, since Early Spielberg was once the gore-lovingest son of a bitch on Planet Earth, and I'm including David Cronenberg in that estimation.  But it's not as if his other films achieve blood-and-guts spectacle at the expense of their abidingly dark moods; the most skin-crawling part of Jaws is a conversation between three men.  It really shouldn't be too much to ask that a haunted house film, made by the man who invented the modern haunted house film, traffick in something like the same kind of dread his later films would so amply demonstrate—certainly not when Duel was already in his rear-view mirror.

It's just so hacky, is what it is: half-baked attempts at building atmosphere; workmanlike performances; and, finally, a weak-kneed Conjuring-style ending that doesn't feel any more satisfying for being so blatantly telegraphed.  But I don't want to go too far.  There's nothing really too actively bad about Something Evil; instead, it's almost entirely defined by the absence of anything that's actually good.  So, as it stands, it's mainly useful as a piece of evidence to demonstrate that Steven Spielberg liked to set up searchlights outside windows two decades before he made the acquaintance of Janusz Kaminski, and thus two decades before that particular trick became his Goddamned calling card as a stylist. But, hey: at least Something Evil keeps that nonsense to a minimum.