I'm a genie in a bottle, you've got to rub me the right way 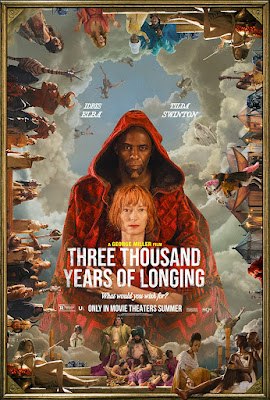 THREE THOUSAND YEARS OF LONGING
2022
Directed by George Miller
Written by Augusta Gore and George Miller (based on the short story "The Djinn In the Nightingale's Eye" by A.S. Bryant")
Spoilers: moderate 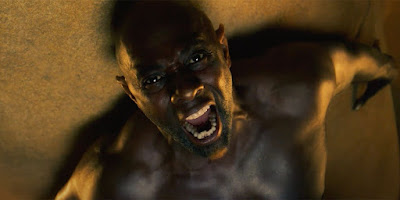 That's how it works, formally, at least, and having seen it twice I think I admire how much these stories are to be taken on their own merits, and how completely Miller and Augusta Gore's screenplay (based, I cannot say how faithfully, on A.S. Bryant's short story) resists imposing any kind crushingly schematic message, moral, or theme upon the collection of tales as a whole—at least besides the basic fact that, like pretty much all stories ever told, they naturally involve desire and foolishness, and a certain tension between love and freedom.  (That said, the important things—wishes, lovers—are typically arranged in threes.)  The downside is the same as the upside: they are to some degree random, all interesting in their own right, but nothing about them builds towards something (well, not within themselves, and not noticeably outside themselves until Miller starts to signpost it), and while packing them in like this is safe (they essentially can't get boring) they can never grow especially elaborate, either.  There is also less craziness than you might expect: other than the very occasional bit where something overwhelmingly supernatural splashes into the film—for example, an ifrit (who, weirdly, apparently loves John Carpenter) comes out of nowhere to stymie our djinn, and he goes right back to nowhere, never ever to be seen again—the magic that drives this story is surprisingly low-key, and not so high-key when it does come to make up for it, though I like, for example, djinn sexuality rendered as a mystical merging.  I mean, yeah: it's Miller operating in fantasy mode, so it's always colorful and intoxicating and I suspect he's nursed a long-time desire to play with oriental iconography; nevertheless, it's distinctly possible that the film's loopiest visual ideas are expended entirely upon the emergence of the djinn from his bottle in the hotel, though in fairness it'd be hard to get loopier than pulling Albert Einstein out of his proper place in spacetime by reaching inside a documentary being broadcast on television.
I could be talked into believing that this frontloading is in (very) quiet pursuit of the way the film wants to prosecute an argument about the abyss we've dug out between ourselves and mythic time and mythic ways of seeing the world, but that's one of its problems too: despite having afforded itself the space to tell four stories across nearly the entire length of recorded time, for unfathomable reasons it leaps across almost the entire span of it between the first and the second, from Sheba three thousand years ago to the court of Sulemein the Magnificent (Lachy Hulme), not even five hundred years ago, already well into the modern era.  (Also, despite the fact that this story has two dudes in a row named "Solomon" fucking our poor djinn over, I'm actually fairly positive nobody noticed they almost had a motif.)
But for all that it's fair to say I was loving it, seeing these fascinating little vignettes and listening to the anchoring sorrow of Elba's voice (he's doing an accent, but not an identifiable one, all the better).  Miller is having a blast illuminating them, with shiny, poppy exotica, as far as I can tell gratifyingly ignorant of the whinier strains of contemporary discourse.  He's just diving in headfirst, even self-indulgently at times (considering what's happening in that sable-lined room, I can't say this is a man shy about his fetishes), and, as far that first hour-plus is concerned, he leaves the stupid handwringing to you.  Moreover, and more importantly, he's guiding it with a keen awareness about how and when to elliptically move from one illustrating image to the next illustrating image, or, with more of an em-dash than an ellipsis, back to Elba and Swinton instead, if seeing their reactions to the djinn's stories is presently more important than seeing the stories themselves.  Yet for a movie that sprawls across history and would seemingly present undeniable temptations towards epic pretense, it is stunningly intimate—another, maybe even more meaningful benefit of that unusual construction—and to an almost absolute degree it is Elba's and Swinton's movie alone.  Maybe even mostly his, since he's the storyteller—a Scheherazade, a comparison I'm glad is left to a name of a business in a digital matte painting—but Swinton seizes upon her own opportunities.  Limited to, essentially, a framing-device-rendered-as-a-genre-savvy-audience-surrogate, maybe it's for that very reason that when her emotions come to the fore, she gets the strongest individual moments: when she admits that she relates to not just other humans but her own feelings through stories, it's pitched in precisely such a way to make it clear that her film recognizes that this is a far more universal condition than her character quite understands, even though it's her character's literal job to understand it.  (This second time through, however, I'm not entirely sure that Swinton isn't being too subtle in the groundwork she's obliged with laying.)

The problem is that this needs an ending ("every story about wishing is a cautionary tale," after all), and after an effectively actless, real-time talk opera, the film grinds every single gear it has, and even several there was no reason to think it had, in its attempt to find its way into its new stakes; I don't think the shift from "fable anthology with a romantic throughline" to "brutely clumsy allegory" is a complete disaster in the end, but that pain is keenly felt during the transition, supplementing the already completely-sufficient magical and emotional rules of its story with some pretty idiotic physical dangers.  It's such a nasty swerve: considering all the open invitations it makes to be problematized, I'm a little surprised I never ran across anybody flabbergasted by what I was flabbergasted by, which is the flippant implication that modern day Istanbul doesn't have wi-fi or cellphone towers, in service of a very lazy and unintuitive decision to render London as a toxic, uninhabitable place for a djinn (who turns out to be a being of electromagnetism, but, I mean, aren't we all?).  That's the "allegory" part (and only part of the allegory!), either the source material or the film's idea of framing modern life as alienating and toxic, made ugly by too much information and too few stories, or, alternatively, a very iffy attempt to acknowledge the circle it hasn't even begun to bother squaring as regards the dangers of cultural appropriation and the greater dangers of cultural isolationism.  (It also decides, apropos of very little, to dump into its final movement a Brexiteer satire from what appears to be an entirely different movie—even the film language changes a bit, veering wackier—so that somehow the most arbitrary shit in the movie happens not in the first three thousand years but the last fifteen minutes.)  It spends this entire sixth act (I guess) floundering around, but at the absolute last possible moment, it does find a new groove: it was, of course, a romance all along, albeit one with just enough ambiguity to forever remain a tantalizing, invigorating mystery.
Score: 7/10
Posted by Hunter Allen at 10:40 AM