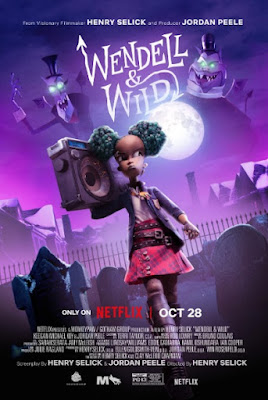 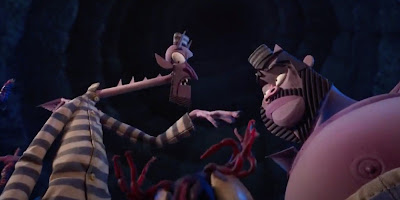 The done thing for the (surprisingly few) detractors of Henry Selick's long-gestating follow-up to—good grief—2009's Laika production, Coraline, is to ritualistically apologize for trashing a labor of love from a pioneering stop-motion animation auteur, and to announce the sadness with which they cannot, in earnest, say that they like it.  It was my first instinct, too, but I think instead I want an apology from him, for spiraling his way into a situation where thirteen years could have gone by with only this to show for it.  Many of those years, I know, were spent locked away in a dungeon under the Pixar complex, which Selick used to develop several kid's horror cartoons that it's hard to imagine anybody at Pixar or in the larger Disney conglomerate ever seriously contemplated producing for him.  But fully the last seven of those years, it seems, were spent in pursuit of our current subject, Wendell & Wild, at last completed after stops and starts and pandemic delays, and either too many compromises or too few.
Joining forces in 2015 with Jordan Peele (and, perhaps less relevantly to its trajectory as a project, though he's still in the movie, Keegan-Michael Key), and subsequently acquiring Netflix backing in 2018, what Selick finally wound up making is, charitably, a misfire.  Less charitably, it's actively bad, and if you took the Selick name out of the credits, you'd likelier recognize it as an unsuccessful Selick knock-off.  Some of what's bad about it is the Jordan Peele of it: the authorship of the guy who more than any other artist of the last decade paved the way for the end of the concept of subtext—and subsequently lost the discipline to work within the narrowly-tailored social commentary that allowed Get Out to be the thing that killed subtext—is pretty apparent.  Based on an unpublished novel co-written by Selick and Clay McLeod Chapman, which was swiftly reoriented towards becoming a movie once Peele was aboard and may never have existed as a finished book, the supposition would have to be that Selick reached out to a well-liked comic duo (and, you know, Keanu remains my second favorite movie Peele has had anything to do with), and as the years ticked by and Peele became, by an order of magnitude, the more important partner, the production wound up absorbing idea after idea, in a fashion somewhat similar to that of an atom absorbing neutrons, which can be productive but isn't usually the best thing for its stability.  Alternatively, Selick, never himself someone who's outright refused to play inside an unstable narrative scaffolding, lost perspective and just sprayed his ideas all over the place.  Indeed, the truth is probably both these things happened. 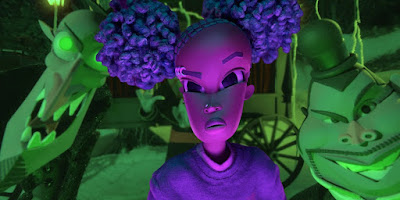 That unstable narrative, then: in a Rust Belt town, literally called Rust Bank, there lives Kat Elliot (Serelle Strickland as a younger child, Lyric Ross for the balance of the film).  She's the daughter of Delroy and Wilma Elliot (Gary Gatewood and Gabrielle Dennis), owners of the hard-luck town's sole industry, a root beer brewery, which has lately been targeted for takeover by Lane and Irmgard Klaxon (David Harewood and Maxine Peake) of the eponymous Klaxon Korp (very subtle! also Lane is Black Trump for, I guess, added thematic effect, though his design and animation more resemble Black Boris Johnson, and Harewood's performance resembles neither).  The Klaxons wish to bulldoze the site, I think, and replace it with a private prison, as the acres and acres of effectively-abandoned land in and around the city are, for reasons never articulated in the screenplay, unsuitable.  Well, that's for later: for now, after returning home from a night out, Kat is startled by a freakish two-headed worm that turns out to have been inside her candy apple, and she shrieks, causing her father to lose control of the vehicle right at the moment they're passing over a river.  Her mother has sufficient time and composure to calm Kat down as the crisis unfolds, and Kat manages to swim to the surface, but Wilma drowns attempting, I think, to save an unconscious Delroy, leaving Kat alone and broken enough in her self-blame that she turns to delinquency, eventually landing her in juvie.  Five years later, Kat, despite no indication whatsoever that she's Catholic (there is also no indication she has any court-appointed guardian, or that her parents' estate ever probated), is sent to Rust Bank's Catholic all-girls school as part of a vaguely-described pilot program for rehabilitating wayward tweens, and we find that it is very nearly the only institution left standing in her hometown following the probably-arson-related fire that gutted her parents' brewery and devastated its economy.
The school's rector, Father Level Best (James Hong), welcomes her, but seems to have some darker agenda, and she befriends—only in a very approximate way, for she hates basically everyone including herself—her peers: Siobhan (Tamara Smart), daughter of the Klaxons, who attends this school despite no indication that she's Catholic (and every indication that her parents are extremely wealthy and would not possibly deign to send their child to school in Rust Bank); Siobhan's pair of semi-mean girl pals, who are not important; and Raúl (Sam Zelaya; it's a fairly liberal Catholic school).  It clarifies what Father Best is up to: he's working with the Klaxons to build that prison after all.
Meanwhile, in some part of hell, there are Wendell (Key) and Wild (Peele), demons consigned to penal duty maintaining the dwindling hairs of their titanic father Buffalo Belzer (Ving Rhames), who otherwise spends all day in an infernal inflatable pool enjoying the spectacle of the diabolical amusement park he's built for the souls consigned to his care.  Wendell and Wild chafe under their father's regime, dreaming of building their own amusement park, and they get a new chance when they make contact with Kat in a hallucinatory vision following the ingestion of some of their father's magical baldness cream.  This is important, because Kat is a Hell Maiden—as it turns out that her teacher Sister Helley (Angela Bassett) was before her-—a mystical person who can, I think, summon demons to Earth, albeit without binding them in any way to make them useful, and from the evidence presented here those demons have no inherent power to do anything.  The other important thing, then, is that Wendell and Wild have access to their dad's baldness cream, and their dad's baldness cream can resurrect the dead, and Kat is interested in this, though unsurprisingly once the demons are called it turns out the demons are untrustworthy and are instead much more interested in acquiring... venture capital... to build... an actual... physical.... amusement... park.  On Earth.  Uh, anyway, Kat has to stop them and, also, the Klaxons.
I realize that is an abominably detailed and long plot summary only made longer due to my inability to get through it without constant sarcasm and saying "I think" a lot, but though you won't believe it, I was actually restraining myself.  And yet, as the nature of the film is such that it practically invites that kind of disorganized bitching, why not just lean into it?  So here's a big list of some of the other things wrong with Wendell & Wild's story: the extremely calculated way it imposes its guilt-trip on Kat, just credibly enough that she could blame herself without it actually being in any way her fault that a father could somehow be so distracted by his young child's backseat squealing that he drove off a fucking bridge; the employment of a Catholic school as a setting for no apparent reason, even for exploiting Catholic iconography, beyond deploying a couple of penguin-shaped Selick grotesques as elderly nuns; somehow managing to be generically snide about Catholicism while being oblivious to how eyebrow-raising lines like "remember, you're special" and "this is our little secret" are coming from a Catholic official; a trans character whose principal storytelling function is to serve as a barometer for whether characters are good or bad, since the former remember his preferred name and the latter do not; and, getting more towards structure, there's a cross-cut sequence where Raúl, tasked with desecrating graves for the plot, manages to exhume fully eight corpses in the time it takes Kat to retrieve an order of falaffel, and this isn't even, like, a joke, it's simply that this film doesn't consider "time" or "cohesion" to be important narrative components; likewise, in a 105-minute movie so overstuffed that every second ought to have been considered precious, Kat's backstory gets recycled no fewer than three times in visual montage. 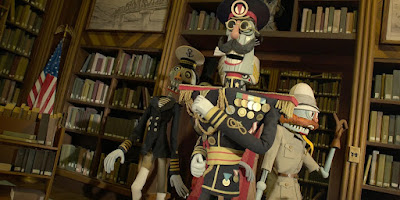