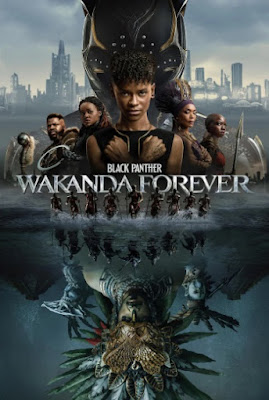 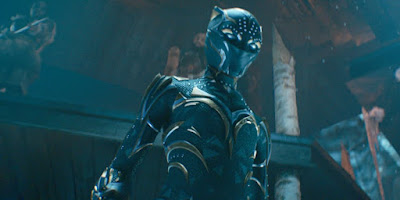 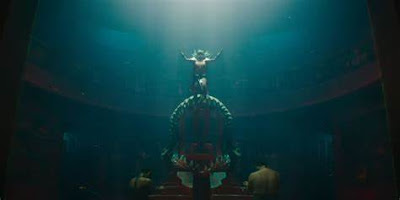 Namor and his soldiers remove America's exploratory force in one of the film's better sequences—he's boxed in, obviously, but Coogler at least gives himself one scene to play with the idea of his gill-men as vehicles for horror movie thrills, even momentarily backing off on the wholesale rejection of Greek mythological underpinnings to present the spectacle of watching hypnotized men leap into the ocean at the behest of a siren call—but, regardless, Namor values his secrets too much to pursue further retaliation against the United States.  Instead, Namor makes Wakanda his target.  Appearing before Ramonda and Shuri, he tasks them with the extraordinary rendition of Williams on his behalf.  If they refuse, they face doom.  They have no intention of serving Namor, though Shuri and Okoye wind up more-or-less kidnapping Williams for her own protection anyway.  But when they refuse to hand her over, Namor comes with war.
It is actually a bit of a mystery to me how a plot this simple occupies 161 minutes of time.  It's not just the Boseman encomium.  It must somehow repeat itself a lot and bog down in the middle, but I'll give Coogler this: I was sometimes annoyed but never actually bored, and didn't even get a nicotine headache, which is not the least accomplishment for any movie this long, and I've been much more keenly bored by much shorter Marvel movies, including Black Panther.  That's a hell of an implication, I guess, but I didn't mention Wonder Woman 1984 without a reason besides making misguided movies-about-marginalized-groups analogies.  It's because they're both superhero sequels that received much less applause than their predecessors, but which I personally enjoyed rather more than their predecessors.  Wakanda Forever might eventually squander that contrarian goodwill, but whatever—I think I'll commit to the hot take. 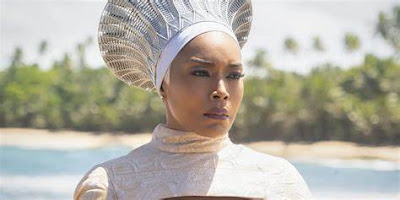 On one count alone, Wakanda Forever falls badly short: it does not have a world-class performance from Michael B. Jordan blasting his way through the clunky monarchical ritual and stuffy fake-African declamation of a bunch of nerds (well, actually... but it's not a performance that occupies much screentime, anyway).  In numerous other respects, Wakanda Forever exceeds its predecessor.  For instance, somewhere between that film and this film they stopped being such fucking nerds, and while we would all prefer Boseman to still be here, the screenplay that has no choice but to deprive our cast of their relationship to the fictional character, T'Challa, turns out to be to their benefit in every case.  Bassett has dimensions of disconnection to her surviving child to play alongside the irrationality-tinged grief for her dead one that's affecting her monarchical judgment; Wright has a retreat from responsibility to play alongside a repressed fury that only grows as the dead she has to mourn stack up and her atheist materialism leaves her nothing of comfort; Gurira has an actual personality to play besides an all-purpose cold smugness alongside being drummed out of her majesty's service for spurious reasons; and Nyong'o gets to play a sealed-off exilic arc that gains traction on the basis of Nyong'o simply being a good actor, texturing the one still-living character I already liked in interesting ways, at least until that mid-credits sequence destroys the sense that her own life simply halted when her boyfriend's did.  (It is astoundingly misconceived, muddling a pretty muddled denouement even more; I assumed it must've been, like, Boseman's actual son, and learning that it isn't, and he didn't have children, and therefore that this isn't an essentially non-narrative tribute to the man, means the movie really does think I give the first damn about T'Challa's sperm.)  Thorn, meanwhile, isn't required to purely play an advertisement for the Ironheart TV show until the very end, when she becomes an ugly CGI Iron Man suit, and at least she's a vector for normal-sounding English.
But here's the thing: it also has better action, nothing outright superb—I'm cognizant of the criticism that most of its action scenes are all remixes of the first film's, too—but there are several sequences I thought looked cool, and that's several more than in Black Panther.  There's one multi-threaded sequence featuring effective cross-cutting, which is one more than in Black Panther.  Ludwig Göransson's music, which was already one of the best parts of Black Panther, is even better here, Shuri in particular receiving a very excellent character theme built out of screaming electronica that isn't not a cliché, but sounds rad as hell and fits her scientific bent.  Half of it has better costume design and production design, so that even if Wakanda can still feel mostly like just the same two rooms, there's at least one shot that finally does make it feel like a sprawling place with lots of people.  And I even like that it's so much about itself, and don't mind that its only real purpose is to throw Afrofuturist and Mesoamerican action figures at each other, but, perhaps because of the grave register it's obliged to operate in, and even though it's not humorless, it's also not ever trying to be "MCU funny" which at this point is a very theoretical kind of "funny."

And if there's a lot of missed opportunities with Shuri that it seems like, again, a 161 minute film should've been able to take at its leisure, and her emotions are sometimes expressed disagreeably bluntly in [insert arc here] dialogue, I like her journey anyway—though the bad news is that now that she's re-traced T'Challa's own vengeance arc from his introductory subplot in Captain America: Civil War with uncanny precision, next time we see her she might be just as affably uninteresting as her brother ended up.  Wakanda Forever, likewise, does not have better cinematography, and while I think a lot of it looks fine, I earnestly don't know what happened to this film's night scenes, which are shot like the underwater scenes—hell, they're shot like day-for-night but at night.  The underlighting is acceptable enough when we're still working through the marine horror material, but the scenes intended to showcase the "wonder" of Talokan are gruesome murk.  Likewise, several other dark scenes are sufficient to prompt questions about whether this $250 million movie could somehow not afford its power bill.  After all, it clearly sometimes can't afford professional-grade compositing, and I think somebody amongst Marvel's mistreated VFX contractors must be engaged in an unannounced labor action: there are some insert shots here that I refuse to believe Coogler actually directed or even signed-off on, as the Coog is capable of making movies that don't always look amazing but I assert that "Winston Duke and three friends do cosplay for their YouTube channel" does not actually rise to the level of "a movie."
So it seems we've moved onto the bad, and for all that I'm happy to credit it for its successes, this is not actually a good plot: it merely functions to do the thing it needs to do, Black Panther vs. Namor, and it's awfully ramshackle.  Namor's plan is one of the least intuitive supervillain plans in memory—I earnestly wonder if in one of those drafts-upon-drafts, Coogler and co-writer Joe Robert Cole intended Namor to be actively engaged in crafting an excuse for war, since you'd barely have to modify or delete any dialogue to get to a Namor who desperately wants to invade the surface world for [insert reason here] and hopes to drag a casus belli out of Wakanda just so he can knock out the surface world's most powerful nation first.  I don't even wonder if in one of those drafts, and possibly even different versions of the scenes that were shot, that Namor was even flirtier than he already is with Shuri after he captures her, which I'd have approved of heartily (inappropriately aggressive sexual posturing is like half of Namor's whole personality in the comics, and I'd have liked to have seen some here).  Though of course as the scenes stand now it feels like a depressing admission that they know that one of the key fanbases for these things are fanfic writers who want the frameworks for stories, but not the actual stories themselves. 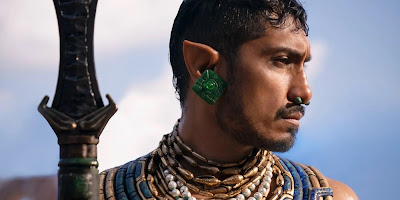 Which all winds up with a pretty boring-ass Namor: he looks neat, and Huerta is fine, and he has a nice way of leveling his eyes at things, but Coogler and Cole are under the impression that escaping 16th century Spanish colonialism is interesting enough to serve as the whole basis for a fantasy nation and its antiheroic champion, and it just isn't.  I do love the genuine cleverness that went into integrating Namor into his new Mesoamerican context—the ankle wings identifying him with a winged serpent god, the link to actual-factual flooded Mayan ruins, and even though I've spoiled everything else, I would not spoil how they give Namor his sobriquet—but the visualization of it is stunningly unimaginative, almost literally just Mayan stuff dunked in water, and their society never feels like anything more than a waterlogged diorama.  And for all the strenuous effort made to distinguish Aquamayan from Aquaman, perhaps it's a bit of misstep that both their movies conclude with the hero sparing the life of the villain because the hero's mother told them to.  Above all, it's just a fundamental adaptation error: the other half of Namor's comic incarnation's personality is that as much as he hates the surface world, he's a half-caste alienated from his fellow merpeople, too—basically Killmonger, really (and, yeah, Aquaman... and, hm, also Loki)—and so while I guess maybe that trope was getting a little threadbare, there's also nothing here to replace that psychological engine.
I used the phrase "boxed-in," and that's what the film's Talokanil* feel like, a concept reimagined under very burdensome constraints: from the very weird and inconsistent "we turn blue out of the water but go back to being bronzy-brown beneath" that in a movie this expensive feels like an active choice not to "erase" their skin color and make five people on Twitter mad about it, to the willingness to prematurely surrender the horror-inflected (goodness, Lovecraft-inflected) menace the Talokanil evoke, to the scowl-inducing predictability of how Shuri's vengeance and Namor's antagonism ultimately shake out.  I mean, it has its moments: I would not have used that particular shot of an impalement if I weren't able to slop some CGI blood onto it, and I am both charmed and repulsed by the sheer Silver Age juvenilia of Shuri's scheme to weaken Namor's godlike strength by basically tricking him into getting into a sauna, but the final duel is remarkably brutal and good for MCU action, and at least successfully pretends towards the epic in its emotional clash of titans.  But I would also pay two extra dollars for a ticket to an MCU movie where their masks don't digitally fly off their fucking faces so the actor can stop the unfolding action cold to allegedly "emote" their fucking lines, and I would pay some large amount of money I haven't calculated yet to see a version of this movie that could at least have ended with Shuri throwing Namor's charred body before his followers, instead of Shuri and Namor parasailing back and barely stopping short of giving each other high fives.  But still, as far as the MCU in 2022 goes, it's basically pleasurable.
Score: 6/10
*I have no idea how to pluralize or adjectivize Talokan in Mam or Yucatec or whatever; Marvel says Talokanil. It's worth mentioning that as far as I can tell Tlalocan is a Nahua afterlife concept, so might be sort of like discussing the leprechauns of Belgium.  But you can likely guess why lots of Mayan mythology is unavailable to us today.
Posted by Hunter Allen at 6:57 AM