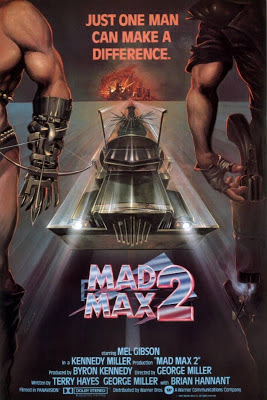 In each and every aspect where Mad Max fell short, sometimes into mediocrity, The Road Warrior achieves greatness. Mel Gibson’s performance is more refined; the character of Max finally remolded into a potentially menacing figure, now approaching the terminal psychopath we were blandly told he was becoming in the last film. The storytelling is more sage and its set-ups more profitable. The stunts are better and more numerous, their spectacle more spectacular. The threat is bigger, badder, and understandable in its goals. The characters are more interesting inherently, rather than interesting only when they have something offbeat to say. The apparently obligatory pair of gay villains nevertheless seem to have a loving, healthy relationship that matters to the story and that just incidentally happens to involve marauding, and one of them being on a leash. Indeed, even though they were arrived at by raiding BDSM stores (not a joke), the costumes in The Road Warrior are better, too. And, most vitally, George Miller has now committed to a post-apocalypse we can comprehend; and, by shooting on location in the scrublands outside Broken Hill and the endless highways of the Outback, rather than a populous exurb of Melbourne, Miller has given us here a vision of his brutish future that is believable, bleak and beautiful. 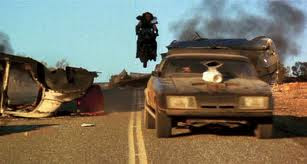 But the Department of Infrastructure and Transport is still doing a pretty good job keeping the highways paved and painted, under the circumstances.

The film begins with a voiceover, and in one of its few missteps, we are provided with black-and-white stock footage of mid-20th century conflict that sort-of illustrates the narrator’s words, even though the images we witness have little directly to do with the exchange we are told occurred between two great warrior tribes (USA! USA!) which has rendered civilization null (for real this time). The montage’s 1.33:1 aspect ratio renders its connection with the 2.35:1 film to follow even more tenuous. Remember the opening sequence of Soylent Green? Like that, but less inspired and a lot more garbagey. The word is that this wasn’t used in the Australian version; it’s a toss-up since the narration is important, but the imagery is weak.

Never fear, it’s a mere hiccup, if a distracting one, suggesting the piss-poor production value of a Burt I. Gordon creature-feature—odd, when what we’re about to witness is one of the best-looking science fiction movies ever, featuring several of the most expertly-constructed chase sequences of all time.

As a showcase of stuntpeople clambering upon moving vehicles, The Road Warrior’s climax surpasses Spielberg’s truck chase in Raiders, filmed around the same time, and Miller’s and second unit director Brian Hannant’s outstanding work was outdone only after twenty-seven years had gone by, and then only arguably, by Tarantino’s Death Proof. (And in an earlier sequence, a real guy really almost got snapped in half. You’ll see it if you watch closely. The use of your legs is a small price to pay for a good take, right?)

In the years after the murder of his family, and the final collapse of the Australian government, Max has taken to living in the Outback as a scavenger upon the roads, with only his unnamed dog for company.  There, he fights off less successful mounted predators and steals their gasoline- and food-laden kills; and, it is implied, makes his own kills when he’s had to, as well.

Despite his self-imposed isolation, a chance intertwinement with the faintly ridiculous but inventive captain of a pornography-emblazoned gyrocopter leads Max to the Shangri-La that has survived this particular cursing of the Earth: an operational oil well with refining capabilities, run by the last educated and civilized band of humans around—altogether, a potential locus for the rebuilding of a new society, perhaps even a utopia.

Once there, however, Max and the Captain learn that they’re not the first to discover its location, and that Max is far from the most dangerous scavenger around. A horde of barbarians mounted on automobiles and motorcycles instead of horses has besieged the settled people—and, like their Mongol antecedents, surely intend to leave none who have heretofore defied them alive, despite any promises to the contrary.

Their leader: the enigmatic Lord Humungus—a man, or creature, of great size; masked to hide a hinted-at disfigurement, its nature never fully revealed though implied to be radiological; an appreciator of history; the possessor of a meticulously-kept and deadly artifact, used to sparing but great effect; and a wise and charismatic organizer of men. 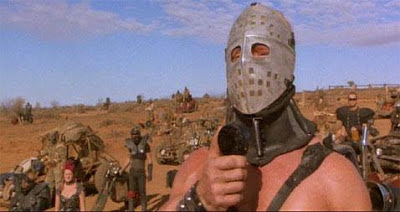 Sneezing, however, is ever a dire affair for the Humungus.

At his side is Wez, a bemohawked fiend, a lover as well as a fighter.  Wez is inseparable from his bleach-blonded boyfriend, but that may just be because he's got him on the aforementioned leash. 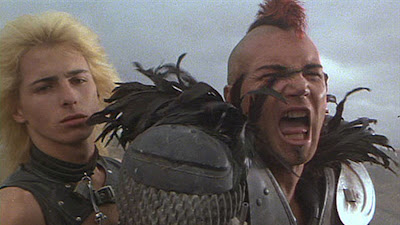 And out come the wolves, I guess.

Max, though desperate enough, hesitates to involve himself in their conflict; for the time being, he observes. Not until he witnesses the ugly results of a sortie by the oilers does he interfere—and whether this is because he is moved to action by guilt over his inability to save a female oiler from rape and murder at the hands of Humungus’ soldiers, or whether he just saw an opportunity to trade a corpse's honorable burial for gas and supplies is brilliantly unclear.

Soon after his arrival, Max winds up part of a road skirmish (the road war comes later) between the oilers and the Humungus.  Blood is drawn on both sides. Wez’ lover is killed, and in a mirroring of Max’ own past, the Humungus’ lieutenant becomes increasingly aberrant, from an already pretty high baseline, in his pursuit of revenge.

After the fighting, Max provides the oilers their last hope for a breakout: retrieving an abandoned big rig from the highway, fixing their tank full of precious juice to it, and drawing the Humungus’ army into a running and costly fight for the gasoline while the bulk of the population makes their way to the coast. Max' part in this operation is to secure the rig.  In exchange, all the petrol and rations he can carry with him.

If Max does care—and despite the oiler’s leader’s entreaties, insights, and insults, it’s no sure thing he does—he doesn’t let these tender feelings stop him. Once the rig is acquired, he demands his payment, and takes his Ford Falcon out of the compound in an attempt to break the Humungus’ lines solo. Wez, fixed on Max as a focus for his rage, pursues without orders. If Max’ poorly-considered plan worked, the movie would be over, or if it worked even less well than it actually does, we’d have the futuristic Vanishing Point I asked for for Christmas.

Instead, Max barely survives, the beneficiary of an exquisitely shot airborne rescue courtesy the Gyro Captain, and Wez is punished for his overzealousness, finding himself now the one on the end of the Humungus’ leash.

Max is now bereft of much choice. He finally agrees to full participation in the oilers’ escape as driver of the rig with the tanker in tow, although his injuries mean he’s the one now who has do to the convincing. Of course, you know that there have been some slight modifications made to the plan since he left. Max, however, does not. Ignorant of the true nature of his mission, does Max go to war.

The Road Warrior features one of the great twist endings, even if the logistics of getting all that into the tanker are a little nebulous, and when Max smiles at the hopeless absurdity of it all, it’s not completely clear whether the transformation into a terminal psychotic is complete, or if we’ve witnessed the redemption of a monster, however meaningless and lonely his return to human emotion promises to be. 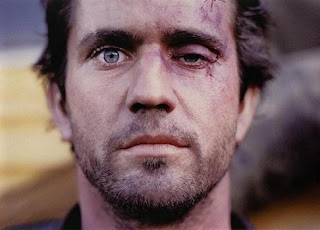 Yet a quibble: while the psychological ambiguity hits the spot, the factual ambiguity of whether Max did or did not know of the true silicate nature of his haulage has spawned debates and could and should have been made clearer. It’s obvious enough to me that the weight was added to dupe Max; why would he permit himself to be so laden by his allies when speed and maneuverability are essential? To others it has not been so obvious; their answer to the question asked above is that it was the oilers’ and Max’ attempt to give their joint ruse the look of realism in the face of the Humungus. Well, that has some merit, but I still don’t think Max knew. George Miller is no help; on his commentary, as one of film’s most memorable endings plays out, he discusses the lighting and shooting order. How fascinating. Thank you, George.

But Miller getting bored with own movie’s sleight of hand aside (hey, I’m sure he’s seen it a zillion times), what we’ve got here is a lot of cars, a lot of explosions, a lot of bloodied and broken bodies—so well choreographed, edited and shot!—and the conclusion of Wez, finally let off his chain and finding that revenge is not so sweet, especially when you wind up smashed to pieces between your boss' nitro-burning funny car and a Mack truck in your desperate attempt to attain it.

Twist be damned, the enormity of the climactic setpiece is easily worth a B+ all by itself. However, the results of George Miller and company’s maturation as filmmakers and writers, particularly in their characterization of Max, and his oft-overlooked counterpoint in Wez, combines with the pure adrenaline of the action (FOR REAL THIS TIME) to elevate The Road Warrior to a triumph.

A textually as well as visually rich film, there are elements—like the Toadie as prototype for the loquacious PR rep of the principal villain, the Captain's arc from coward to unreluctant hero based solely upon the power of breasts (hey, they work), and the reveal of the Feral Kid's destiny—that I haven't even touched on.

Noam Chomsky knew you had it in ya, kid.

Our storyteller returns in the closing moments, and speaks of Max' passing into the realm of legend. His insistence is earned. And it is certain that for as long as our great tribe exists, we shall remember The Road Warrior too.