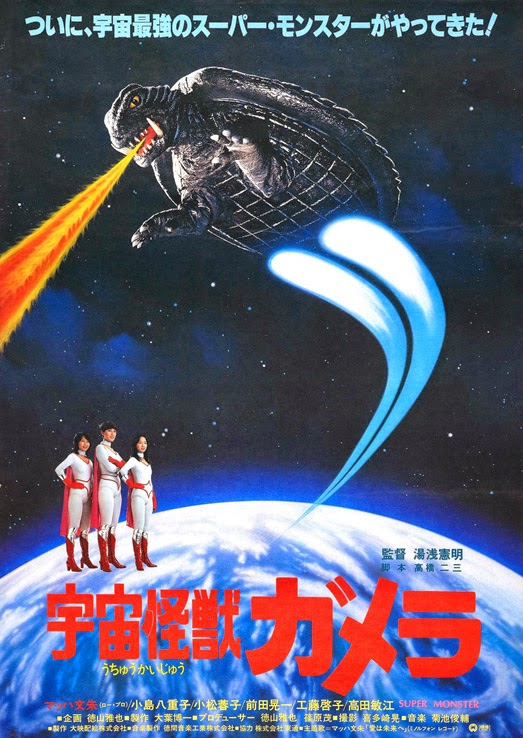 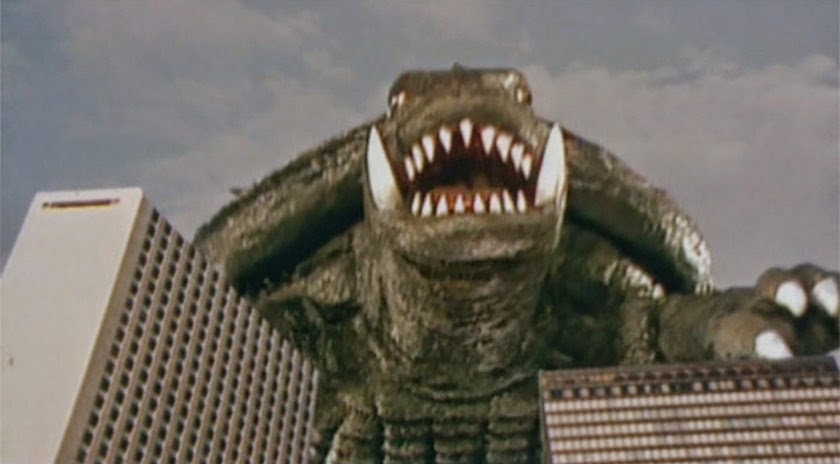 I said I dreaded it, but I didn't quite conceive how bad it could be.  To avoid the pain of reliving Gamera: Super Monster for just a few moments more, let's talk briefly about what happened to the Gamera franchise—and Daiei Film Company—between 1971 and 1980.

Gamera vs. Zigra was one of the last films produced under Daiei as an independent entity.  By that point, due to years of mismanagement by Masaichi Nagata and his son, Hidemasa, the studio was already facing bankruptcy.  Zigra, a cheap and lazy effort, wasn't likely to save it, despite modest box office success.  (Hey, Nisan Takahashi's formula might have been stupid, but it did work.) 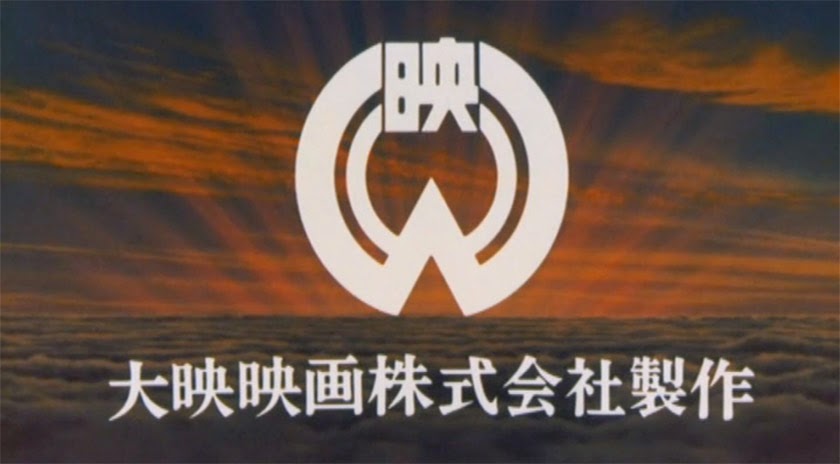 An eighth Gamera film was in pre-production when the lights went off; this started as Gamera vs. Wyvern, evolved into Gamera vs. Garasharp.  As I understand it, Garasharp would have seen Gamera face an enormous kaiju (even by Gamera standards), and potentially one of his very coolest foemonsters: a pregnant two-headed snake.  Garasharp would be felled, but her progeny would be born even as her body met its death.  When the JSDF try to kill the infant Garasharps, Gamera would step in and protect them—for Gamera is the friend of all children.  The film would end with our heroic turtle delivering them to an isolated island, where they could live in peace—and presumably live in incest, too, but I doubt either Gamera or Takahashi would've thought that far ahead.

(Since I'll never have another opportunity to mention it, I recently learned of another abandoned Gamera project, too, called Gamera vs. the Ice Men.  This would have premiered in 1966, and he would've fought a race of, essentially, alien jotunnar.  Sounds killer, no?  Of course, this became Gamera vs. Barugon, a mediocre substitute that wasn't even directed all the way through by Noriaki Yuasa.)

Yuasa's filmmaking and Takahashi's writing were going downhill fast in the early 1970s, but no matter how bad Garasharp might have been in execution—and in fairness it would have been the first real shakeup of the Gamera formula since Goddamned Gamera vs. Viras, four movies back—I think it is unavoidable that it would have been better than this.  It took nine years after Zigra to bring Gamera back.  He comes in the form of a botched backalley abortion, splashed across the pavement while its mother bleeds out in a pile of trash.  Gamera: Super Monster is one of the worst things I have ever seen.

I want you to bear in mind that, like Roy Batty, I've seen things you people wouldn't believe (and they've taken years off my life); I've seen After Last Season, and you, most likely, have not.  Bear in mind too that, by and large, I'm a pretty mellow critic, trying to find something of value even in movies I despise—I don't know if I'd give a true, hard F to The Room.

But no kidding, Super Monster really would be one of the worst movies I'd ever seen, if it were in any sense a movie in the first place.

Daiei was now owned by Tokuma Publishing and its properties were Tokuma's to exploit, for whatever meager shareholder value they could possibly generate.  Super Monster was conceived as a method to get their Daiei holdings out of debt, which is just dumbfounding if you think about it for more than ten seconds.  In order to achieve this goal, Tokuma brought back Gamera's auteurs, Yuasa and Takahashi.  Given an impossible task—making a Gamera movie with no money and almost no new footage—the fabled combo simply didn't try.  I was hoping their credited involvement was just an artifact of all the stock footage from their films; it's not.  I'm disgusted and ashamed that Yuasa and Takahashi really are the parties responsible for the new segments.

It's important to realize that neither one had made a movie in nine years.  They'd spent the intervening decade dabbling in TV, and it shows.  Furthermore, Yuasa didn't give a shit, and comes rather close to saying so in his interviews.  That's why Gamera dies in this "movie."  As for Takahashi, I'm honestly not making fun, because some tragic stuff happened to him, and some of the remarks Yuasa makes suggest he became increasingly unhinged during the 1970s.  Compounding his (lifelong) grief over his wife's 1970 death was the terrible treatment he'd received by Daiei during their bankruptcy, specifically their failure to fork over the great deal of money which they owed him; and compounding this was his non-membership in the screenwriters' union, which meant no insurance to cover his losses.  If you read between the lines in Yuasa's public statements, there is more than a whiff of the idea that Takahashi spent portions of this decade actively destitute and reliant on his children.  The last time they met, Takahashi was planning some sort of avant-garde theater production with poor non-actors in the roles (and if anyone could pull off the production of a bullshit neo-realist play, certainly it's the screenwriter of the Gamera movies).  Yuasa tried once more to get in touch with him, prior to Yuasa's death; at this time, he was apprised by one of his daughters that Takahashi did not have a working phone.  Takahashi does still live, as far as I can ascertain, but his seclusion continues.

Anyway, you'd think that at least the fights might be fun: this "movie" is, after all, built around re-edited footage of all of Gamera's battles from the previous seven films.  Unfortunately, they are montaged together unconscionably terribly, so that day becomes night, night becomes day, and space itself is eaten and shat out by the end.  The editing is so bad that it can't even accidentally fix the original terrible editing that sometimes marred Gamera's conflicts; the denouement of the struggle between Gamera and Guiron, for example, is left intact, in its full, incomprehensible glory.  Worse than anything, though, is that the battles are re-scored, to this hideous 1980 TV-style music, basically the least appropriate sounds possible, and what drama remains after the re-editing is obliterated in a sonic eschaton of cheesy electronica that even I can't like.  The stock footage is effective exactly once, when the characters are watching a scene from Daikaiju Gamera on a tiny TV in a pitiful resolution, and it looks kind of like what a good version of Cloverfield might resemble.

There's a plot to Super Monster (abandon all hope), and it goes a little something like this:

Three groovy space women are hiding on Earth from the bad aliens on the spaceship Zanon.  The leader is Kilara, the one who looks like a Japanese Columbia from Rocky Horror, and she is the only one who matters, at least in the sense anything matters anymore.  The other two also have names, however, the first being Mitan, and the other being, apparently, "Marsha." 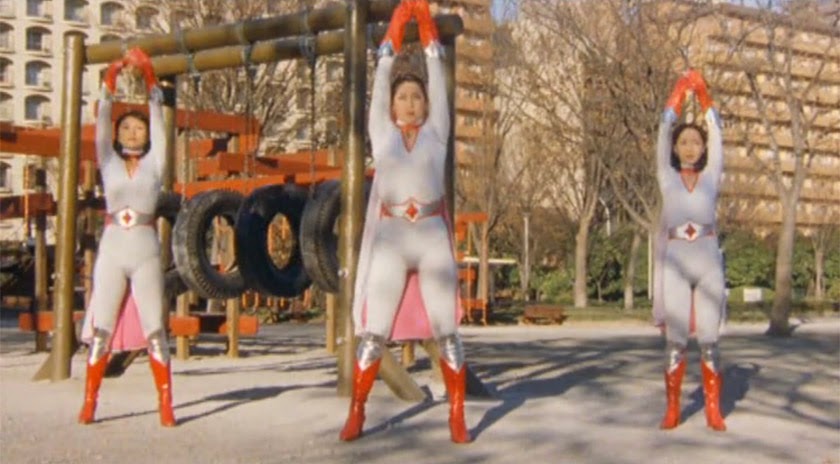 Another, less groovy space woman, an agent from the Zanon, is pursuing them.  Somehow, young child Keiichi becomes involved in their stupid star war.  (Incidentally, I went to my town's Pride Parade yesterday, and still didn't see any shorts shorter than the ones on this kid.)  Meanwhile, the bad aliens are controlling Earth's monsters (and the Zigra Planet's monster, and the Viras Planet's monster, and Terra's monster, because fuck continuity).  They unleash their stock footage upon Japan, and Gamera, caught in a time loop, must fight to stop them.  However, Gamera is in this "movie" a lot less than you'd think, even in stock footage form, and of its 91 minute runtime, probably 60 or 65 is spent with these fucking people: 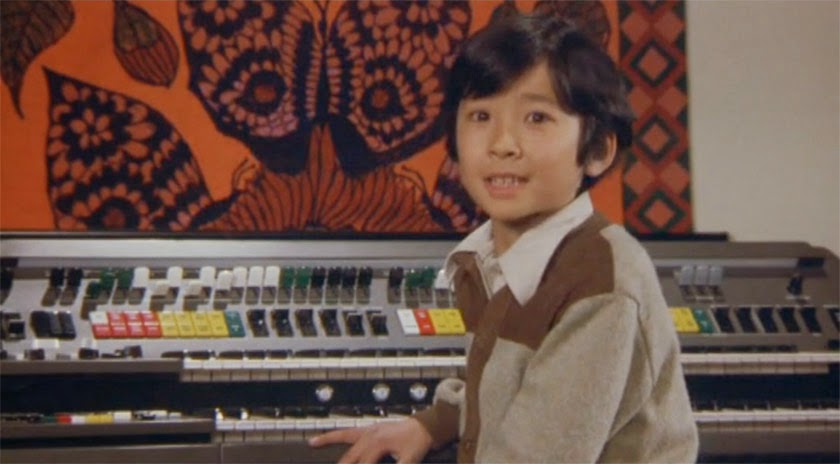 Probably 10 or 15 of those minutes revolve around the space women's transformations, which involve interpretive dance and piano recitals (I'm not making any of this up), and are performed in full every.  Single.  Time.

There is a great deal of teleportation featured in this "movie," and I'd never thought teleportation could be padding, but Noriaki Yuasa, genius that he is, proved me wrong.  Further, the various scenes of teleportation are accomplished by something like eight different devices, ranging from more bad editing, to the credits sequence from Dr. Who, to Iconian gateway technology.  The last provides the "movie" with one of its very few inspired moments, when what appears at first to be only a televised image becomes, to our surprise, a portal.  It's never used again.

The standout sequence, however, is when Gamera goes into space and prepares to fight a cartoon.  Specifically, the Space Battleship Yamato. 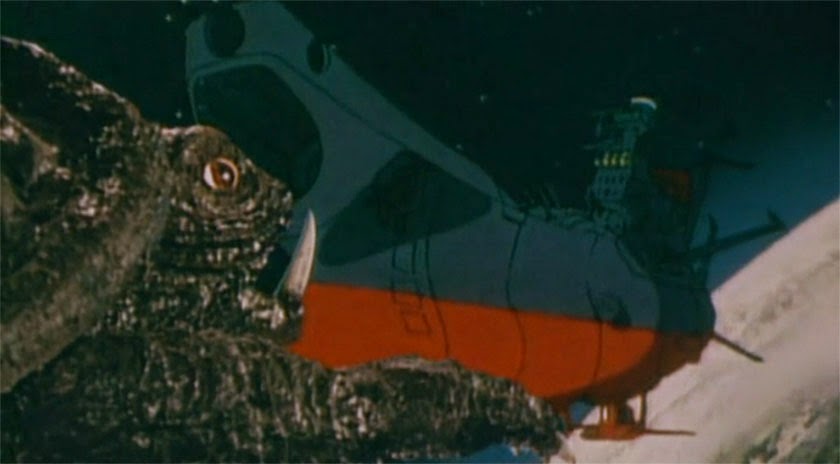 And, as the Apostle Paul said, "Jesus Christ."

This is marginally explained as one of Keiichi's dreams; the second sequence, where Gamera follows an animated space train (of unknown provenance) back to Earth (and yes, really), features no such rationale.  And you know what?  I doubt it could.

At one point, I deliberately got up, left the movie playing, and cleaned my cats' litter boxes, and I was going to tell you I did this, and also tell you I didn't care.  But, bastard that Super Monster is, I missed the single important plot point in the entire "movie" when I did it, and had to rewind to discover why Gamera had now turned against humankind.  Simple deduction would've sufficed, and I should've known it: it's because the aliens were using stock footage from Gamera vs. Viras.

It's not even basically watchable, really, but what really makes this one of the worst films I've ever seen is the absolute gall—the drunken courage—on display here.  For the first time, the Gamera franchise takes a direct swipe at its only true competitor—and it does this in Gamera: Super Monster. 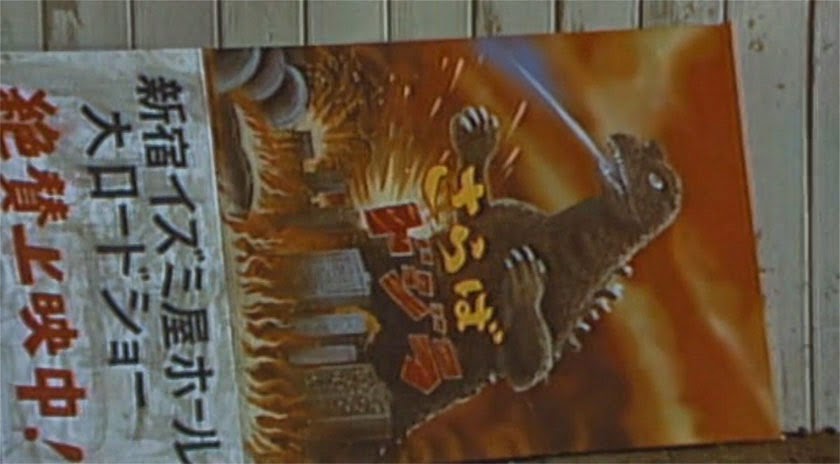 Look, I'm glad Noriaki Yuasa and Nisan Takahashi maybe got to eat in 1980.  But otherwise, there is not a single molecule of value in this abomination of a motion picture. Super Monster is the "movie" you'd show somebody if you wanted them to hate Gamera, hate kaiju films, and hate life.  It is proof that we live in the worst of all possible universes: the one where Gamera: Super Monster exists.