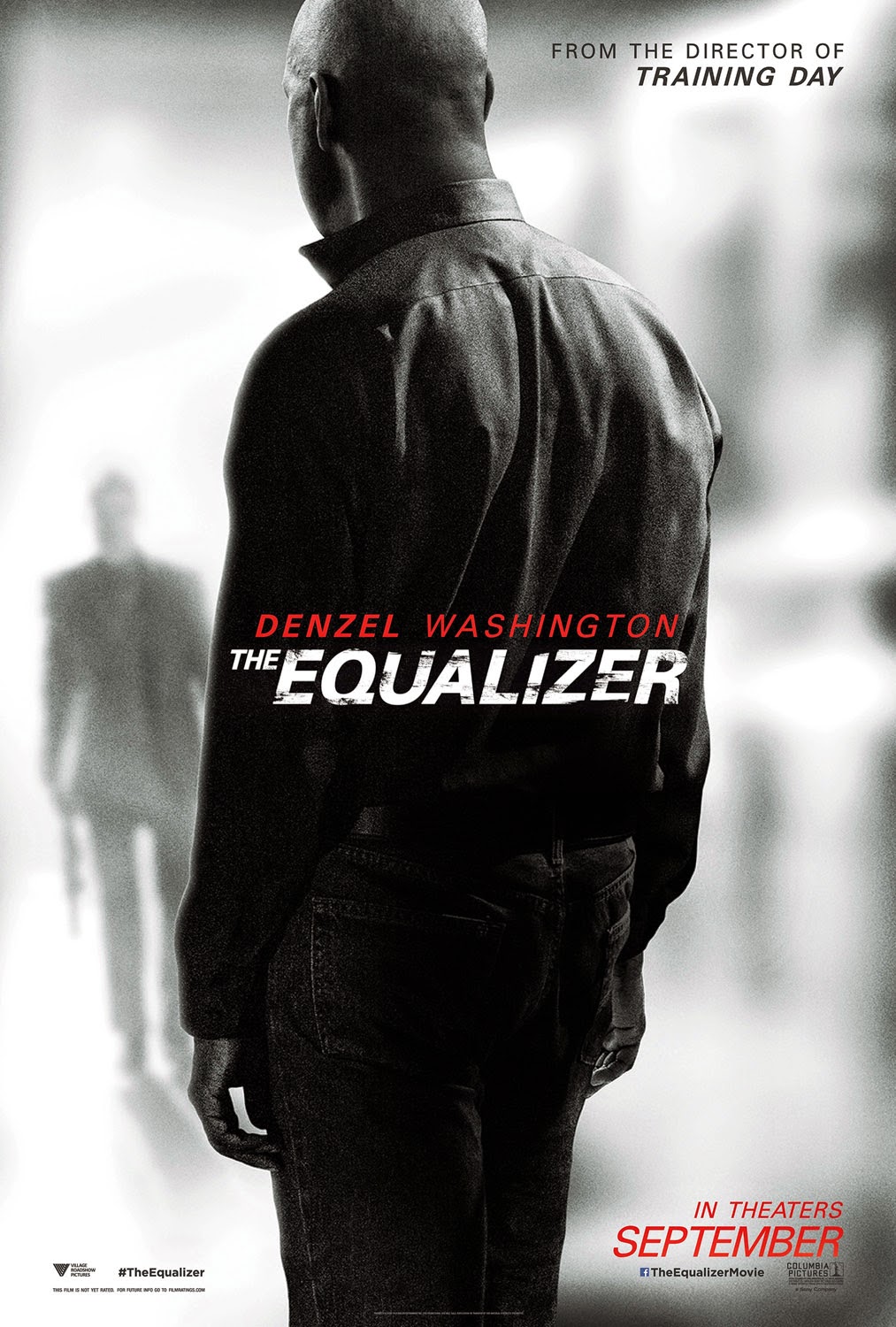 In The Equalizer's best scene (which is not, I hasten to add, saying very much), the 80s badass cinema-style action is recast instead as something not dissimilar to that of an 80s-era slasher, with a shot that I'm positive was lifted directly from one of Halloween's brood, if not Halloween itself, except that instead of the villain being the threatening out-of-focus silhouette standing preternaturally still in the doorway over the shoulder of our foreground subject, it's our hero, Robert—and, yes, only to disappear in between cuts.

The scene involves no gunplay by the hero, despite the cornucopia of firearms his dispatch of the Russian mobster Meat has provided.  In fact, Robert, like Batman, clearly hates guns.  He does not own a gun.  He holds a gun only three times in the whole movie.  He fires only one bullet, and technically that is because he forces an enemy to fire that bullet at another enemy.  Unlike Batman, but very much like most serial killers, this is because Robert simply finds guns boring.  This is why he uses—and this not an exhaustive list—a corkscrew, a tree saw, an enchanted nail gun, and a sink.  It is not, unfortunately, a kitchen sink.  This would be evidence that the filmmakers were in any regard self-aware.

In the same scene, as Robert lynches a man with a noose made of barbed wire, he regards his victim with cold curiosity from behind a face pretty much as close to a William Shatner mask as Denzel Washington can make.  And, if this had wound up making a Final Girl out of "Teddy," Marton Csokas' evil foreigner, we might have had a really interesting movie.

But, of course, despite its many strange and self-sabotaging choices, The Equalizer is what it says on the tin: a riff on a little-remembered 80s badass property that will, itself, be even less-remembered as soon as next week.  It's not even half as gory as my recitation of Robert's unconventional methods make it sound, nor a quarter as delightfully gonzo.

There's nothing wrong with movies about vaguely fascist vigilantes with all-powerful skills and their moral compasses permanently fixed to true north as they carve a path of blood and guts through the naked city, but there's two ways to play that subgenre, and The Equalizer tries to have its grand guignol and its stinky, sour film noir too.  The result is a film that is permanently trapped in an untenable superposition between joyously creative ultraviolence and the deliberate destruction of all joy everywhere.  Fuqua's crafted a relatively good-looking movie here, but he's clearly more infatuated with the shots that permit him to be elegaic, even to the point of sedation, than he is with his merely tolerable action composition.

Metaphorical images litter the film, ranging from the relatively subtle (the camera glimpses an attractive extra's bottom on the train, only to turn to Robert, lost in a novel, underlining his disinterest in sex before we ever get to the underage hooker), to the practically obscene (a loop-de-loop that pores over the death tattoos that cover Teddy's naked torso, ending with his body hanging spectrally over a fade-in of the city below), to the ones that simply force you to ask "Why is this shot, specifically, in a movie called The Equalizer?" (while Teddy slowly strangles a woman upstairs, another obliviously tends to a barbecue, because, God damn you, evil is everywhere).  Bear in mind, too, that this is the very same film that also features a bitchin' slow-motion fight beneath fire sprinklers and, with a commitment to the image that forecloses the barest possibility of irony, a cool guy not looking at an explosion, even though Washington is specifically namechecked in the song. 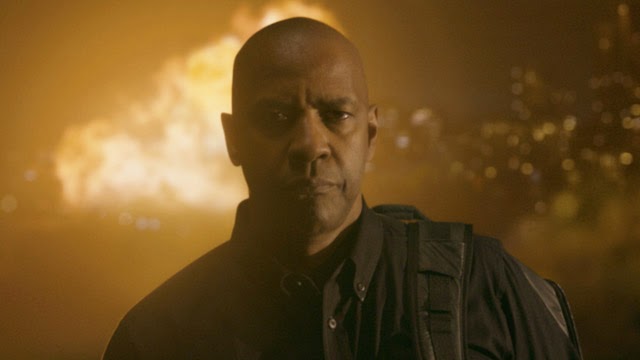 It's the noir, then, that ultimately dominates, though it lacks the crackle and fire of any of the classics, let alone the discipline.  The Equalizer is an exercise in how dour and padded an action film could possibly be, plausibly the result of a bet Fuqua made with Christopher Nolan.  It is wholly bereft of any of the real social commentary and hardline politics that energize its venerated ancestors, Dirty Harry and Death Wish, each of which are, in fact, still more fun.  Though there are a few abortive attempts at iconic lines and several simulacra of jokes in this movie, the only moment where delight is unavoidable is also unintentional.  This is the Topkapi-level blustering montage of onion-topped landmarks and Cyrillic signage that, after something like 20 minutes of travelogue footage, finally lands on a shot of a mansion, which is then subtitled "Moscow."  (They mean the one in Russia, I think.)

The premise of The Equalizer is basically the same as a zillion other movies: Robert is a good man, who befriends a fallen woman, who is basically good as well but comes to harm, and he must redeem/protect/avenge her because that's what good men who are also killers do.  (Police exist solely as paid agents of the villains in The Equalizer's alternate universe version of Boston, before you ask.)  Screenwriter Richard Wenk does little more than fill the blanks in the form script that already exists for this story.  Robert is old, a widower, his interest in young Alina is not romantic in nature, he reads books that serve as nearly-offensive symbols for his character.  Alina is a minor, a prostitute, she has dreams, some clients are worse than others, her pimp is abusive.  Even so, there's such a sweet, fragile beauty to their friendship, cooked up over late-night diner meals—it's pretty much entirely in the performances by Washington and Chloe Grace Moretz—that one doesn't entirely mind that it takes a while before the plot really begins to move.

Then Moretz just disappears, and just as soon as the initial rout of the Russian mobsters that own her is over, the plot puts its feet up and takes a nap, while Robert engages in a variety of tedious side quests that have nothing whatsoever the fuck to do with the Russian mob.  Instead, we get to explore the problems of Robert's workplace buddies.  It did not go unnoticed that the Russian mobsters are also rich, with elaborately production designed offices and homes festooned with art and beautifully lit.  Robert, by contrast, works minwage for the man at a big-box hardware store, replete with killing implements, but also, until it becomes a killing field, lit by either nasty fluorescence or unflattering sunlight.

As far as I can guess, these interminable vignettes represent some kind of awful attempt at proletarian representation in cinema that does the actual proletariat watching it an active disservice, since one of the big bummers we face is that our lives are underfunded and (therefore) excruciatingly dull.  Hence, showing boring poor people in your movie and asking bored poor people to pay for it gets us, as the saying goes, coming and going alike.  Next time, please at least cast good actors and attempt to write some kind of dialogue such as interesting people might speak, if you simply cannot avoid the temptation to force us to view your shitty neo-realist short films in the middle of our action movie.

Apparently thanks to the episodic source material, and insofar as Robert lives in the colorized version of Basin City, these sequences (un)naturally evolve into little crime-fighting vignettes.  This should make them marginally more tolerable.  Instead they are not just ridiculously contrived, but become the most disposable scenes in any movie made this year.  They do nothing but drag the pacing of the film into an abyss that it never claws its way back out of, an abyss that it is brutally kicked back down into during the long lullabye of a scene where Robert visits some of his old CIA chums before Fuqua and Wenk finally deign to have action happen again.  A savage recut would've gone a long way toward making The Equalizer a legitimately good film.  As it stands this stupidly indulgent 131 minute movie is at least 40 minutes too long.

In the less unnecessary 90 that remain, The Equalizer has its moments.  The kills, though their impact is lessened by the seriousness with which Fuqua approaches the film generally and by the inexplicable lack of true grue in a hard-R outing, are nevertheless each tolerably radical in and of themselves.  Washington is certainly more engaged than he was the last time he stepped into his Stock Washington Action Character, though this is barely a compliment.  And I'd be remiss if I didn't laud Csokas a little bit; his Claude Rains impression needed a serious tweaking and his character needed more enjoyably evil things to say, but he gets a few and is still probably the very closest The Equalizer gets to the camp tone its camp content would recommend.

It's just not quite good, though, and anyone can tell you that is almost worse than being bad.