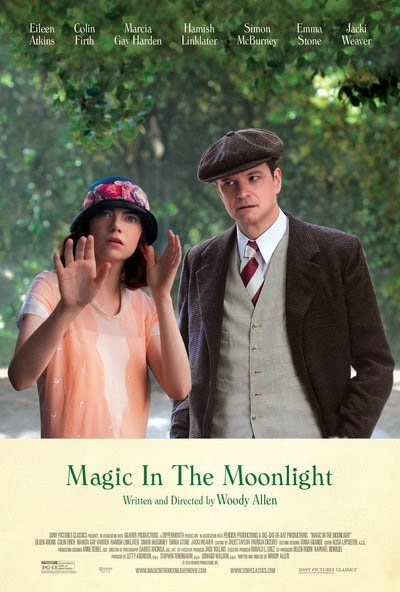 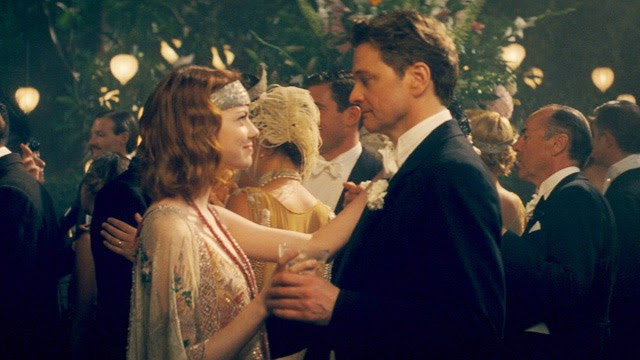 Despite professional magician and skeptic Stanley Crawford's bitchy protestations to the contrary, the supernatural is patently evident from the first lines of Magic in the Moonlight onward, and within moments of his arrival in France to debunk the alleged psychic powers possessed by Sophie Baker, blunt force proof of it has been offered.  Sophie may or may not be capable of great feats of prestidigiation, and she may or may not be defrauding a grieving widow by claiming to communicate with her dead husband; but the real dark art being practiced here is nothing less than movie magic, specifically the kind that allows an utter asshole to recite every horrifically, devastatingly nasty thing that his screenwriter can dream up, yet still have people somehow willing to not just continue providing him room and board but to hang out with him the next day.

Alternatively, maybe it's got a perfectly scientific explanation, and you just need to look like Colin Firth.  I understand he's supposed to be horrifically, devastatingly handsome, and though he's normal-handsome for certain and recognizably charismatic to boot, I don't quite get that either.  But my tone deafness to the Hot Guy's charms are not, I hope, on the same dissonant level of the lines Woody Allen forgot to rewrite about Sophie when he decided to cast her as Emma Stone.  Behold, now, a middle-aged man try to explain to an essentially flawless collection of atoms, who would remain ideally beautiful within the heart of an exploding star, that she looks best in the dimmest possible natural light.  We are supposed to understand this as defensive, although—of course—it more comes off as Stanley being blind.  (And if you puzzle, you do so alongside Ms. Stone, who thankfully does not attempt to bring anything so insincere as insecurity to her performance.) 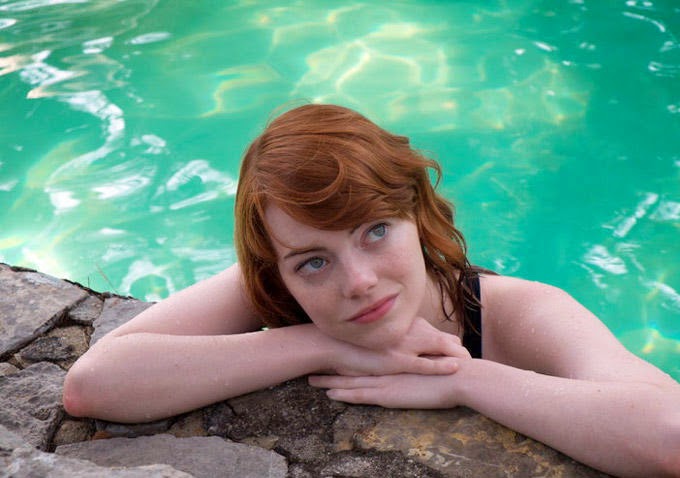 Allen might not have been willing to dial down his precious insult comedy, but that wasn't the hill his cinematographer was going to die on.

So, you see, this is one of those comedies that are also romances, and as has been well-established by many others, it would be a vastly superior production if it weren't.

Even leaving the premise as it is, significant improvements could have been made in many little details of the blossoming romance in Magic, like telling Colin Firth that there was one.  At least, someone could have told him that his character motivations included heterosexuality—or any sexuality of any kind.  Some assistant managed to let Stone in on the secret about halfway through.  Firth, however, was apparently apprised of the matter via cue card, in what I presume were the first and only takes of the final scenes.

Basically, then, we have a romantic comedy where, due to the acting and direction and the script, it is almost impossible to believe that these people could ever want to fuck to each other, which is kind of a problem.  Aside from the vaguest, most cliched possible foundations for the leads' putative relationship, it's easier to comprehend the first 80 minutes of Magic as not being any sort of romance whatsoever.  Despite being repeatedly told what the movie was about, I apparently forgot, because that is in fact what I did.  I treated it as a dark comedy with notes of hope and light.

And as a dark comedy with etc., Magic is absolutely wonderful.

It is, firstly, a fantastic excuse for screenwriting with an angry, funny verve, with dialogues that sound more like monologues that sound a lot like an old man raging at his own mortality, that rage so-slightly tempered by a desire (but the inability) to embrace the delusions that seem to grant others courage against the end.  Stanley Crawford would probably describe himself as an acerbic rationalist, but really he's what we'd call a militant atheist.  He hates magical thinking so much he's seemingly made it his life's work to destroy it wherever he finds it with his expertly-crafted bons mots.  In other words, he's a 21st century hero, which isn't so surprising for a film set in the 1920s, a time not that unlike our own.  We have hints that it's a tragedy that powers Stanley's anti-crusade, but in Firth's performance what we actually see is ennui and emptiness, a recognition of life's capacity for low-grade suffering that is only intensified by the human organism's knowledge that it will fall apart and exist no more.  So, you know, I identified with him immediately—except, at least, for the parts where he dorkily reveals himself as a Nietzsche superfan.

Despite his darkness, Firth plays his rather more entertaining nihilist with infinite aplomb and to great success.  Every moron he encounters is a straight man (or woman) to his depressive-realist schtick, little more than props that say the right lines to trigger his own rationally-maddened monologues.  This is quite fine, although it leaves everyone else—including and especially Sophie Baker—rather underdefined, which of course becomes an issue, though it is not initially.  Yes, a change of heart does come to Stanley soon, when he cannot prove Sophie's mystical prowess a fraud—but fear not, for Stanley is an asshole about optimism, too.

The first and better phase of Magic is a bit more than Firth's comic stylings, though, and this is how I came to believe, at the 80 minute mark, that it was a great movie that had been mistreated and misunderstood by the world.  Magic also features a rather twisty plot with such a totally perfect staging to its denouement that, I confess, it blew my mind.  I fear it could only work once, and I understand other viewers were able to get well ahead of it, but whether I'm dumb or was just in the mood to be surprised, I was absolutely delighted by what I got.

And if Allen had ended it not long after that moment—even the camera itself seems to want to fly away, and leave the story there, rather than commit itself to the tacked-on epilogue—Magic would have muscled its way into the top ranks of 2014's finest films with its triumphant combination of consistent hilarity and shock philosophy. 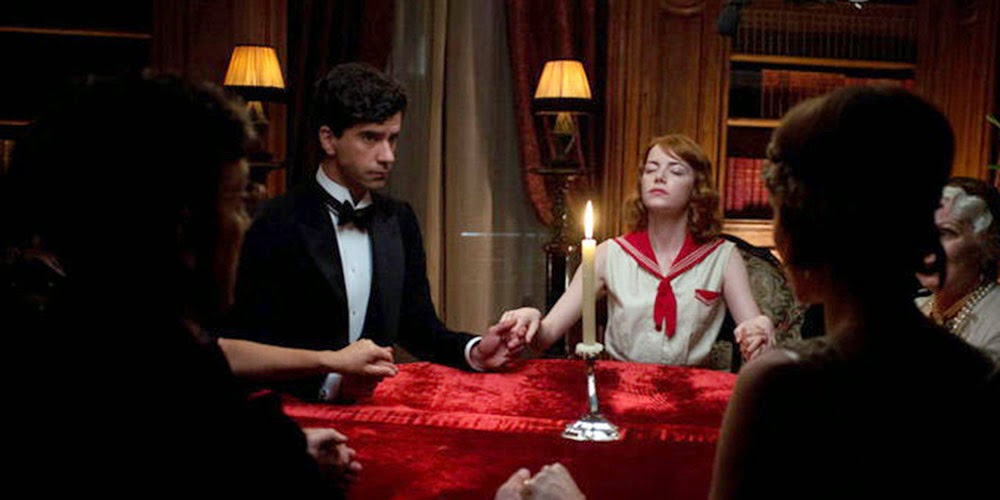 But it doesn't, so it won't, and yet it's a more than worthwhile experience all the same.  Certainly, Allen's retreat back into more (deliberately) heightened fare and period shenanigans is a welcome one.  (I want to take a second here to applaud Sonia Grade's costume design.  Magic's no Catherine Martin/Baz Luhrman joint, but it's doing a very creditable job, and just look at that adorable sailor outfit or whatever it is and how it combines with the reds and yellows of that scene.  Just gorgeous.)

Indeed, Magic is a far better film than last year's episode of the Woody Allen Show, Blue Jasmine, lionized as great Allen by tasteless people.  Rather, Jasmine was nothing but a par melodrama about an economic parasite with a boring mental illness who more or less got what was coming to her, written and directed by a man with no recollection of poverty nor a working understanding of the world as it has existed for the past twenty or thirty years.  (Consider: Stanley's "competition" in Magic, a ukele-playing jackass with a penchant for come-ons like "we could travel... I mean, on a yacht" is not just possibly funnier even than Firth in this movie, he also embodies more cognizable social commentary than the entirety of Allen's more socially conscious movie.)

Magic is perhaps far more flawed in its execution than Jasmine—surely it offers no heroic performance to match Cate Blanchett's and rebalance the script's problems—but Magic also has such bleak, mean-spirited fun with its ideas that its big flaw, however fatal, doesn't matter nearly as much as it probably should.