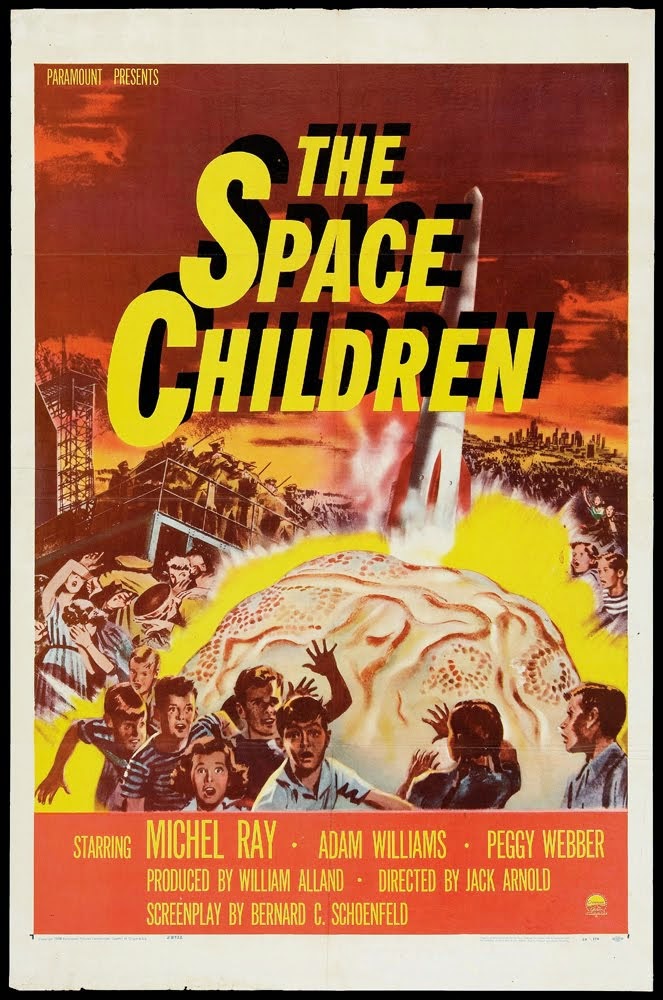 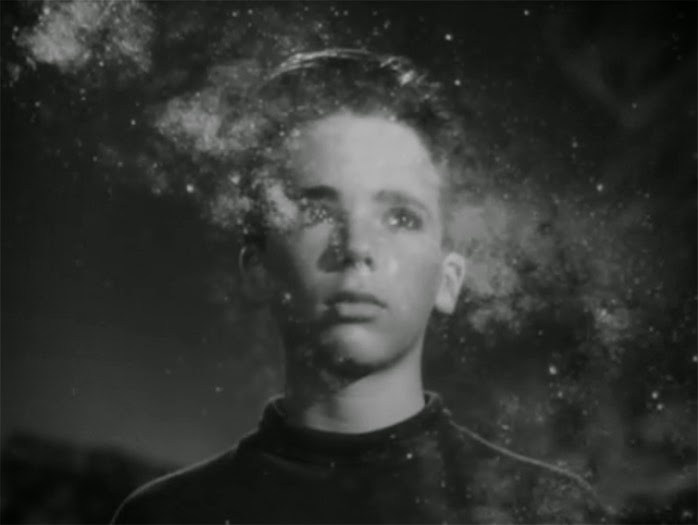 With Science Fiction Theatre gone by 1957, and no SF anthology to replace it until The Twilight Zone in 1959, one supposes there was simply no place for an emphatically made-for-TV work like The Space Children but real, actual theaters.  This is something that strikes me as a disservice to everyone involved, but according to Joe Dante the movie was popular at the time.  Go figure.  It is sometimes remembered fondly now, but it is best known as a season 9 episode of—you guessed it—Mystery Science Theater 3000.

As noted before, the MST3K treatment is suggestive but not quite dispositive of any film's intrinsic worth; aside from the butchered Sandy Frank revisions of a Gamera classic or two, there's perhaps a half-dozen movies that are firmly entrenched on this side of good—or at least entertaining in their own right—like Phase IV, Moon Zero Two and Danger: Diabolik.  Still, it is a little telling that the only two Jack Arnold pictures to make their way up to the Satellite of Love are Revenge of the Creature, a effort both shoddy and soulless, and The Space Children, which—well, it's the furthest thing there is from soulless, anyway.  But it would prove to be the last time Arnold worked with one of his most esteemed collaborators, and one may draw some inferences from that.

Producer William Alland jumped from Universal to Paramount in 1958, and Children was one-half of his double-feature debut at his new studio.  Though planned and executed as the mere B-feature to the more expensive (and generally superior) The Colossus of New York, the canny Alland wasn't ready to give it up for dead.  He must have recognized the kind of picture it was, and called upon the only man who might have saved it.

And from the first images, a Jack Arnold movie is evident indeed; I doubt it's any kind of accident that his new sci-fi picture begins with galactic vistas so strikingly similar to the end of his last super-hit.  But we oughtn't be too hard on what is, in all fairness, a pretty bitchin' credits sequence.

We do eventually exit the stargate, and we find our friends, the Brewsters, on their way to a new home.  None of them are terribly pleased about it, since their new house is, in point of fact, not a house, but a government trailer with barely enough space for the four of them to sleep and eat.  Patriarch Dave Brewster has just been reassigned by his engineering firm to the site of their most lucrative and important defense contract: Eagle Point, base of the Thunderer, which is either a weapon to end wars or to begin them, depending upon whom you ask.  As we're told twice in a row, in largely the same terms, by a child and by a U.S. Air Force colonel, the Thunderer is a nuclear-armed killer satellite, and—hopefully—the Other Side doesn't have one yet.

But the kids spy something strange as the station wagon approaches Eagle Point, a light in the sky.  Investigating later, they find out the cause of that light, and what is a surprise to them probably isn't to anybody watching this in 1958 nor in 2014.  It is—and you'd feel outright cheated if it weren't—an alien being. 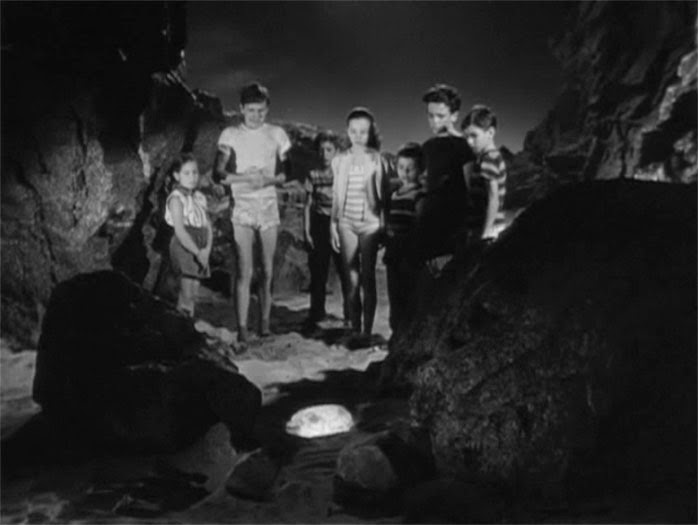 More specifically, it's whatever the hell this thing is supposed to be.  Certainly we are never told.

And so begins The Space Children's problems, as the unknowable alien begins to interact cryptically with the children.  It is capable of telepathy, both as a form of eerie communication at a distance and as an offensive weapon; there is telekinetic power within it, that it uses to enforce its will; it has plans for the Thunderer that put it at odds with the adult establishment; and it is, we'll see, growing larger and, perhaps, mightier.

Children is something of a sloppy work, especially for Arnold, direly inconsistent in its technique and an absolute hodge-podge when it comes to its plot.  Its material is in no way capable of sustaining even a 69-minute film, and the impression it leaves you with is that literally nothing that happens in the movie, before the final five minutes, ever mattered in the first place.

In terms of pure visual construction, sequences of jarring cuts from wide shots of the beachside community to rear projections of the same (and back again) come not long before creepy and atmospheric beach cave sequences done on closed sets.  These latter scenes look like nothing so much as an excised black-and-white science fiction reel from Masaki Kobayashi's Kwaidan; but it's impossible to say how much of their egregiously stagebound quality is intentional and integral to Arnold's efforts, and how much is just Alland and Paramount's cheapness. 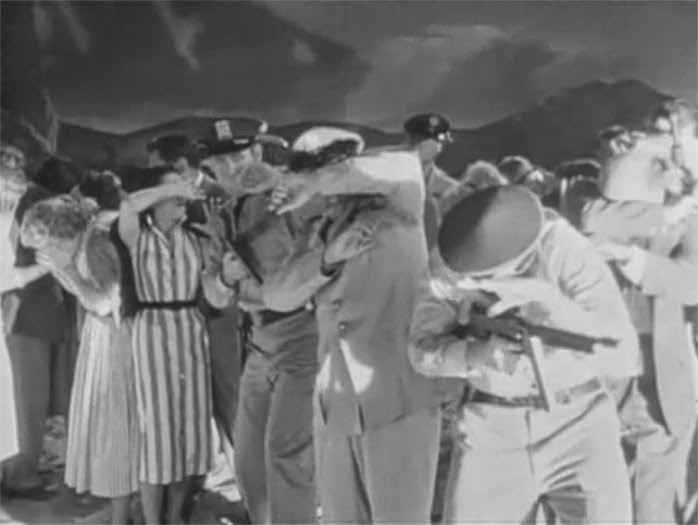 Or perhaps the thing speaks for itself.  Apropos of nothing, director of photography Ernest Laszlo was nominated for an Academy Award eight times, and won once.  No, really.  Yes, for cinematography.  No, this isn't even the only time this exact thing happens in the movie, it's just the most obvious in a still.

And in the midst of this contradiction, we have a whole chain of events where the Professor himself, rendered delirious by too much coconut wine, shatters the already iffy sense of geography by drunkenly chasing his stepson around and, in the process, somehow overtaking a party of children eager to show off their cosmic friend to Dave without ever passing any of them.  It's all incredibly bizarre and dreamlike, but I'm not at all certain it serves even the ghost of a purpose.

The power of the alien itself, though vast, is unknowable by design.  Unfortunately, for all this establishes a mysterious tone to its manipulations of its juvenile agents, it also seems calculated to permit the writers to churn the script out without too many people asking too many questions about specific plot mechanics.  For example, no one ever seemed to ask questions like "What is it feeding on to make it grow?", "Why does it need the children?", "Why is much of the first act spent carting the jello-like creature around, while it's still small, from the cave to the Brewsters' trailer, only for them to take it back to the cave immediately thereafter?", "Why did the Brewster kids let Dave know about their secret in the first place?", let alone the most pertinent question of all: "Are you high?"

If you do a lot of work, you can suppose the creature is feeding off the belief of the children, building its power, or whatever—but this is so much guesswork.  The film is deeply disinterested in your confusion.  It is more interested in its The Day the Earth Stood Still morality play (even having the balls to end with a Bible quote about the innocence of children, something that sits uneasily alongside their mental manipulation by a terror from beyond space).

It's all a very frustrating muddle that foreswears any particularly interesting dynamics within its reasonably talented cast of child actors, throwing away the opportunity for some kind of proto-Explorers in favor of the incomprehensible and esoteric actions that form The Space Children's somewhat dull facsimile of a story.

Indeed, there's hardly any focus on the characters of the children at all; the best Arnold and the script can do is veer wildly between two radically different characterizations for Bud Brewster, anointed the leader by the entity's brain waves.  One mode is that of a serious child possessed either by the awesomeness of his mission, or possessed literally by an alien mind, and Bud is often looking off into the middle distance, seeing things we cannot, hearing things we shall not.  The other is that of an ordinary preteen rapscallion, only abstractly aware of the gravity of his task and beginning to revel in the terrible power granted to him by his celestial benefactor.

Michel Ray is more than serviceable in both these modes; the dysfunctional inconsistency of his character is down to Arnold and his writers.  They never integrate and reconcile the two sides of Bud Brewster into a truly chilling vision of an immature messiah.  Perhaps Schoenfield and Filer needed to put away their King James and dust off their Gnostic texts to find a bit of inspiration on what young gods are capable of.  The Space Children is sometimes touted by its defenders as a precursor to The Village of the Damned; and this is an odd thing to tout, given that—somewhat suspiciously—the novel The Midwich Cuckoos came out the year before.  In any event it's a damned mean thing to say about such a classic sci-fi horror film: Village instinctively understands what Space Children, in its pacifist zeal, just won't.

The biggest question, hanging over the movie like an irradiating cloud of plutonium dust, is this: why does the creature not simply destroy the Thunderer outright—or do so when it has gained sufficient power?  For this is exactly what it does at the end of the movie, despite the ineffective suggestion that the kids are somehow engaged in an elaborate plan to sabotage its launch; a close reading of the film reveals that every act of high treason they commit is little more than an inconvenience and hinders the launch of the Thunderer not at all.  But with one enormous telekinetic blast, the Thunderer is no more.

The Space Children is not an outright failure of a film.  Though made for pennies on the dollar, and possessed of pretty outrageous cinematic fuck-ups as a result, Arnold maintains an enigmatic atmosphere throughout, to an extent not felt—fittingly enough—since It Came From Outer Space.  If it is rarely compelling, neither is it a truly hard sit, like Revenge of the Creature.  It's minor, all right, and in the final analysis it does suck very nearly just as much.  But here's the key difference: it's got the Jack Arnold touch.  And I don't just mean a hand spearing into the frame to scare an unwary character, although it does have that, too.

The Space Children is, for all its flaws, a sensitive, heartfelt picture, and in that regard it's more like Arnold's best than his worst.  In some ways it's the most sensitive he ever made—indubitably, his most openly polemic.  It is surely wounded badly by Arnold's budget-driven messiness; but it is fatally undermined only by a truly wretched script.