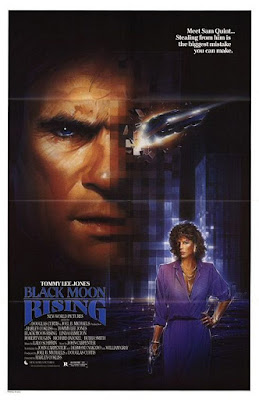 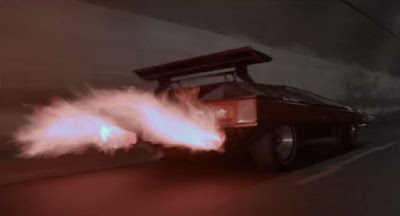 Before we finally pick back up with the canonical Carpenter, there's one more piece of apocrypha we must deal with first: 1986's Black Moon Rising, a film somewhat-loosely based on yet another abandoned Carpenter script that he wrote in the 1970s, and eventually brought to the screen by another director, whose name is unfamiliar and whom we find operating at a decidedly lower level of skill, all while being barely-funded by New World Pictures, the House that Corman Built.  If this sounds familiar, it's because it's more-or-less the exact same production history as The Philadelphia Experiment, released two years prior.  However, in a most unexpected turn, unlike The Philadelphia Experiment, Black Moon Rising is actually good.  In fact, it's very, very good.  In many ways, it's as entertaining an action-thriller as Carpenter's own Assault on Precinct 13 or Escape From New York—albeit in a far more understated, destined-for-Cinemax kind of way.  Still, if we haven't unearthed a lost classic here, we've nevertheless found something awfully close, and if you got me drunk and had me talk about it, there's a better-than-even chance I'd throw around a "great" or two before I got the spins and, ultimately, vomited upon your couch.

As the poster says, meet Sam Quint, the kind of high-tier professional thief you only find in the movies.  We catch up with Quint en route to his latest job—and, he hopes, his last.  We quickly discover that this time he's working on the side of the angels, or at least the closest thing to angels Black Moon has.  He's on assignment from the U.S. Justice Department itself, whose efforts to lawfully investigate the Lucky Dollar Casino have proven fruitless.  Thus, they've quietly retained Quint to acquire a certain magnetic tape, held in the Lucky Dollar's archives, which they suspect contains everything they need to know to make their charges stick. 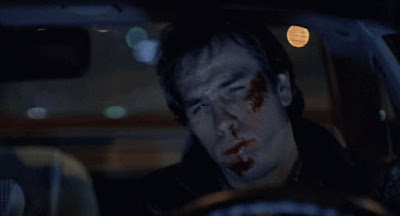 Warrants are for wimps.

Unfortunately for Quint, the Lucky Dollar's been prepared for this eventuality, and in the midst of his heist he runs into his old acquaintance, a thief-turned-security-expert, Ringer, who rapidly makes things personal and does his damnedest to gun Quint down with an Uzi.  Quint escapes with the tape, his life, and most of his Jeep Cherokee, but Ringer's in hot pursuit.  They collide again at a very particular gas station, where the brazen contrivance-based storytelling of Black Moon makes itself even more apparent than it already was.  Quint runs into an automotive engineering team—Earl, Billy, and Tyke—and their fabulous motorcar, the Black Moon, a wedge of darkness powered by exploding hydrogen and built out of bulletproof kevlar, presently hitched to a transport truck and kind of just sitting there, not well-attended by the trio.

When they ask Quint for directions to their final destination—a rich man's club in L.A. called Betsy's—he hides the tape in the Black Moon's parachute bay, and thinking he's quite clever, Quint saunters on over to Betsy's that night to retrieve it.  And if you think the film has leaned on coincidence so far, you haven't yet seen the part where Nina, demi-boss of a corporatized car-theft ring, shows up with her minions and steals every car worth stealing in the whole parking lot—including the Black Moon, tape and all.  Quint, receiving a nice punch in the solar plexus from The Government for his failure, tracks down Nina and her big boss, Ryland, apparently the billionaire hybrid of a carjacker and real estate developer.  Finding himself a little overmatched, Quint enlists the help of the Black Moon's designers to help him break into the chop-shop hidden beneath Ryland's office towers.  As far as Nina herself goes, she's got her own frictions with Ryland; she could prove to be a valuable ally.  And besides, who can resist the charms of Tommy Lee Jones?

It's all 1980s action fluff, to be sure.  It offers nearly everything the decade is known for—sloppy-yet-exciting gunplay, techno-fetishistic heists, car chases with deeply-implausible automobiles, and unnecessary-but-enjoyable sensuality arising from believable-if-detail-free romances—and all with a production value that is just sufficient enough to get the basic ideas across.  In other words, it's 1980s action fluff in just about the best possible way.

Indeed, if not quite good enough to stand alongside the greatest examples of this particular artform, it's still better than most of its kin (it's certainly better than any episode of Knight Rider I've ever seen), while retaining that wonderful time capsule quality that always seems to be stronger the dorkier any given production gets. 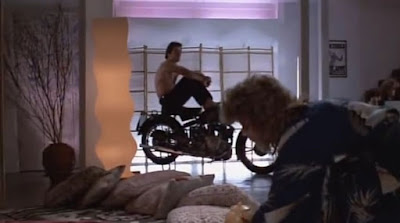 One of the ways Black Moon distinguishes itself from its cohorts is by employing an especially recognizable cast.  Not every one of them can be described as a particularly talented actor, I suppose, but (somewhat amazingly) many of them can be.  Either way, it's still awfully comforting to walk into an 80s B-picture and find performers whose careers ever actually rose above the waterline at all.  And thanks to a screenplay with three whole factions in addition to its heroes, Black Moon winds up with a substantial ensemble, filling the screen with such luminaries and sub-luminaries as Bubba Smith (Moses Hightower from Police Academy), Lee Ving (Mr. Boddy from Clue), William Sanderson (J.F. Sebastian from Blade Runner), Dan Shor (Billy the Kid from Bill and Ted), Keenan Wynn (Richard Knight, the journalist from Parts: The Clonus Horror), and—of course—Robert Vaughn as the big villain (I assume you know who Robert Vaughn is).  Above all, though, we've got Linda Hamilton and Tommy Lee Jones themselves, providing a pair of lead performances that range from the rather good in Hamilton's tough Nina, to the legitimately great in Jones.  He's clearly not straining himself too hard, but that's perhaps the single most noticeable element of Jones' screen persona anyway: typically, he looks a little bit tired and a little bit more annoyed to even be there in the first place.  It's nice to know that he's practically always been like that, and that even at the age of 39, he had already become perfect at being a surpassingly crotchety old man.

So, from the beginning of Black Moon till its final frame, we get the low-key but enthralling spectacle of Jones, crabbing his way through a deeply ephemeral sci-fi thriller, and with Desmond Nakano and William Gray's script giving him such sarcastic and grizzled things to say, it's frankly pretty fucking amazing.  (If you'll permit me a minor historical tangent: you may or may not be aware that Jones was almost Snake Plissken, and while I'm by no means sure that this would've been better, I think we have to accept the possibility that it could have been.  It wasn't the first time that Jones crossed paths with a Carpenter story, either—eventually, despite the fact that the finished product reportedly barely resembled Carpenter's original draft, I expect that someday soon we really will have to circle back to 1978's Eyes of Laura Mars.)

If Jones is what really makes the film, the filmmaking itself isn't that far behind, which is hardly something to be expected from any low-budget 80s action movie.  Indeed, it's not something you'd expect from the first twenty or even thirty minutes, let alone from Harley Cokeliss' lousy opening gambit, a perfunctory, ugly shot seen through a convenience store window.  Luckily, the script gets us through such rough patches: to take that opening scene, our very first impression of Quint comes from the way he handles an armed robber who blunders into the store.  (Jones simply condescends to him till he leaves, ashamed.)

But Cokeliss gets better—it's hard to screw up imagery of rocket-cars, or of L.A. at night—and there are centerpiece sequences that are honestly better than they have any right to be, like a death scene that takes a character's deafness and, applying a bit of sound design formalism to it, turns it into something genuinely harrowing.  Then there's that amazing fight between Quint and the gang of thugs Ringer's set upon him, which emphasizes the living shit out of Quint's fleshy vulnerability in a way that takes it completely out of the ambit of 80s badass action, and out of that subgenre's general reification of the superhuman.  Meanwhile, the same scene's culmination deploys some editing that is as perfectly-timed a series of shots as I've seen in a while: it's just slow enough to let you know what is about to occur, yet quick enough that it still seems to come out of nowhere, so that you get to experience the sublime and difficult mix of surprise and satisfaction together at once.  Obviously, I haven't even gotten to the very raddest part of all.  Let's just say that Furious Seven owes Carpenter, who conceived Black Moon's gonzo climax, quite the serious debt.  (And just ask Luc Besson what happens when you owe John Carpenter a debt.)

Black Moon Rising has the power to surprise, and that's not nothing.  But the biggest surprise of all is that there's no special reason to believe Carpenter's involvement would've made it appreciably better.  It would probably be better-looking, I guess; particularly if Dean Cundey or Donald Morgan had come along for the ride (it would've been shot in a 'Scope aspect ratio, anyway, which all car movies ought to be); likewise, it probably would've had a cooler score.  But I can't imagine that the script would be better, nor the action tighter, nor the performances particularly more vivid.  Black Moon is no perfect film, and yet it's close enough to the perfect version of what it is that it seems like the absolute height of ingratitude to ever wish it were made by anybody else.