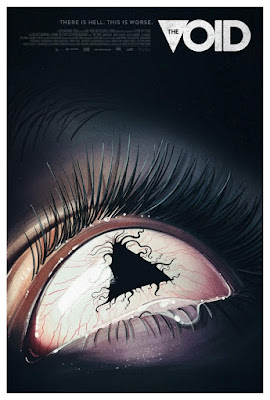 The question is, "Why must it be like this?"  That is, there's obviously an audience for the kind of thing that The Void is doing—I'm in it, and you're probably in it, too—so why does it need to take a pair of neophytes and a Kickstarter campaign to get this kind of old-school Lovecraftian horror movie off the ground?  That's a bad attitude, I know, but The Void leaves you with precious little else.  It's a memorial to wasted resources, that could easily have been better-used.  Worse, it's a wasted opportunity, to remind the people why all the movies it hearkens back to (or, more aptly, rips right the fuck off) were so awesome in the first place.

Still, if I wished to be charitable, instead, I'd say that co-writers and co-directors, Jeremy Gillespie and Steven Kostanski, are ambitious men, with their hearts mostly in the right place.  Their reach just exceeded their grasp.  Hopefully, this feature-length demo reel let them work the kinks out; I wouldn't be tremendously averse to seeing what they brought to the table next time.  If, of course, there is a next time.  (Though I suppose there shall be: for whatever else I say about it, The Void clearly did scratch an itch for some of us, and it does appear to be at least a marginal financial success.)  But being charitable assumes that Gillespie and Kostanski, co-partners of the Canadian production collective Astron-6, actually deserve charity, particularly the benefit of the doubt you'd like to give any genuine filmmaking virgins.  Yet one does have to note that both of Gillespie and Kostanki have been making movies, in some capacity or another, for quite some little while.

Indeed, it comes as the precise opposite of a surprise that The Void was the brainchild of two of men behind Astron-6's microbudget, 80s throwback studio.  (Full disclosure: I've never actually seen anything else the collective's done.)  And it comes as even less of a surprise that one of The Void's co-directors, Kostanski, is a tested practical effects man.  (Meanwhile, I assume that Gillespie is an actual unicorn.)  On the other hand, this is also to say that Kostanski isn't a "director," as such.  And neither is Gillespie.

But I said "Lovecraftian," too; so, putting two and two together, you've doubtless already arrived at a basic idea of what this movie's about, and your basic idea would likely be pretty much correct.  Yet it's hard to prepare you for just how much of The Void is nothing except a bunch of "look at me, ma!" showing off for Kostanski's practical effects-making art, devoid of anything like the imagination (or, failing that, anything like the formal rigor) that would turn this kind of gore-and-tentacles exposition into a movie actually worth standing next to its legendary forebears.

From the evidence, it appears that the Kickstarter paid handsomely enough for The Void's production, and paid not one single Canadian penny for The Void's script.  Nevertheless, there's something like "a story" here, and this is how it goes: somewhere in rural Canada, a cop named Daniel is on his usual "patrol," which, in practice, means sitting in his cruiser and dicking around till it's time to go home.  But on this fateful night, a wounded, drug-addled man stumbles directly into his path, and Daniel's obliged to take him to the nearest hospital, a dilapidated and ramshackle affair in the process of being closed down, with exactly four employees on staff—these being Dr. Powell, some kind of orderly or intern named Kim, and two nurses, Beverly and (conveniently enough) the woman who will eventually be revealed as Daniel's estranged wife, Allison.  (A few patients are waiting around as well, and while they're more important than they appear at first glance, they're still not actually important.)

But things get infinitely worse once the changes begin.  (Though now that I'm writing it out, I have to admit: I don't have any clear idea on precisely how they begin.)  Beverly's the first to go, killing a patient, and cutting off her own face with a pair of scissors, as you do in movies like these.  But, down she goes, when she decides to spring on Daniel next.  Into the midst of this chaos appear a state trooper, seemingly from out of nowhere, and then two armed civilians, chasing the smackhead—and we'll remember them from that opening scene, wherein they torched a young woman alive for no reason that made itself particularly apparent in the moment.  But perhaps we'll become acquainted with their rationale soon enough: because whatever's happening to Beverly in the back room, it's happening fast, and that bullet in her head was clearly not enough to stop whatever it is she's become.  There are monsters here, and they want more flesh to make more of themselves.  It would seem expedient, then, to exit the premises; but outside, a ring of men in white ceremonial robes surrounds the hospital, not eager to enter, but absolutely determined to keep anyone else from leaving.

So what we have here (and it hits you like a diamond bullet when you realize it) isn't so much an "homage to 80s Lovecraftian horror generally," as it is a straight-up uncredited remake of Prince of Darkness, and there's nothing The Void can do but suffer under that comparison when it steals all of Darkness' plot points without either taking so much as a hint of Darkness' fascinating scientific mysticism, or filling that thematic absence with any imagination or personality to call its own.  (It's quite likely taking a few pages from Re-Animator, as well, but I can't say which ones specifically; it's been a while.) Needless to say, there's definitely more than a whiff of The Thing and Assault on Precinct 13 here, too.  Even the setting is a straight lift from Halloween II.  Truly, this movie loves John Carpenter so much it would marry him.  The thing is, I don't think JC would have it.

It's aggressively sloppy in its particulars.  Its cast is game, but ceaselessly dull—Aaron Poole's leading man pulls the most out of his character as anyone does, and he still has, at most, half of a personality.  (Of course, when they're not quietly dull, they're actively unpleasant: a significant fraction of the first half of this film is spent on Daniel and the older of the two armed civilians shrieking at each other, evidently because The Void was under the impression that Night of the Living Dead derived its power solely from a combination of volume and shrillness.  Then, at about the fifty minute mark, the power struggle—such as it is—just sort of stops.)

You can likely already tell that The Void lacks any sort of build-up; it simply starts, about ten minutes in, goes immediately up to (its version of) 11, and stays there the entire time.  But even as simple and direct as it is, the plot is still somehow nearly opaque—and not in the good way.  The Void's obscurantism, randomness, and silly twists come off less as "deliberate ambiguities that forebode cosmic mysteries beyond the human ken," and rather more like screenwriters covering their ass with their genre, and pointing to yet another slimy monster in the corner, hoping you won't notice that neither the threat nor the motivation behind it makes a great deal of sense, even on the low-bar level of a Lovecraftian headlong stumble into madness.  (The thing about Lovecraftian freakouts, I suppose, is that you have to do it just right; otherwise it just looks like a mess.)  Or perhaps it's just that the film, itself, must have only congealed into the vague semblance of a narrative in the editing suite: the whole affair is things grabbing victims in insert shots and people wandering dark hallways in haphazardly glued-together images, and virtually every scene (hell, virtually every shot) bluntly slams together with an abjectly primitive start-and-stop momentum.

It could have worked.  Surely, there's a possible version of The Void that turned this chaotic aesthetic into a legitimate strength.  But this version of The Void never feels intentional or guided.  It's what Beyond the Black Rainbow would look like if it were completely uncontrolled; and when that movie is at least as monotonous and boring, you'd at least like to be able to fall back on some kind of artfulness.

The Void is not a total wash.  It is, to its credit, violent, and its practical effects are wonderfully wet and viscous and organic, even if, honestly, they do almost nothing genuinely new with their bog-standard Lovecraftian imagery.  (That said, even on a technical level they do nothing especially interesting or new: I was having a conversation just the other day about the sad irony of practical effects in the 21st century, for though we live in an era of enormous and untrapped possibility, where robotics technology has improved by great leaps and bounds over the comparatively-crude mechanisms of the 1980s and 1990s, our first recourse is still always to CGI.  Yet I remained convinced that if only someone worthy truly took up the challenge of rebuilding the lost art from its first principles, we could make a film today that makes The Thing look like It Conquered the World.  And, to make it plain, The Thing is still vastly more technically-proficient in its effects than The Void, on top of being better in every other way.)

Along the same lines, anyway, Samy Inayeh's cinematography is at least worth considering, if not worth especially praising: it does what it can with inky black shadows (the better to hide the seams, I suspect) and evocative solid color lighting, and it captures more than one strong image—above all, it captures those amazing-looking white-clad cultists (because if anyone here is doing the most she can with the least of anybody, it's certainly costume designer Tisha Miles).  There's even a moment, early on, that suggests a far more rewarding experience than the one we ultimately got: a set-piece battle against the mobile hill of flesh that Beverly has become, backlit by the flickering of a fluorescent light, torn out of the ceiling and shorting out three or four times a second.  Inayeh's strobing scheme hovers right there on the edge between "gorgeous" and "physically distressing," but never actually tumbles down into that abyss.  I dug it.

But most of The Void's craft is still entirely forgettable.  What minimal service it provides, after all, is in the service of a movie that itself only barely functions.  Yes, The Void has its fans (loud ones and obnoxious ones, it seems), but good for them, anyway: I'm glad they got something they wanted.  Yet it must require herculean cognitive dissonance to put this on a shelf next to Carpenter or Cronenberg (or even Gordon or Yuzna), and proclaim it a return to their kind of moviemaking.  Take The Void's score, just for one final example.  I will not shame its composer by name, but then, I'm assuming it even has one: if The Void's accompaniment turned out to be actual placeholder music, put in after Gillespie and Kostanski got tired of waiting on Disasterpiece to call them back, I could hardly claim honest surprise.  But that's the whole movie here, from The Void's nonexistent characters and barely-existent story, down even to its half-assed tableaux of horror.  It's all atmosphere.  No mood.