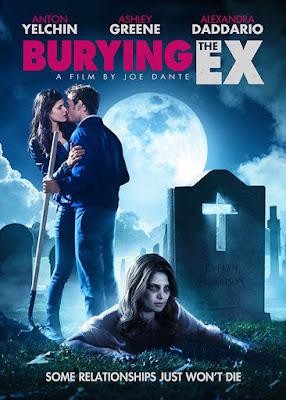 Burying the Ex is the kind of movie that makes you rethink using a numerical rating system—particularly those numbers at the lower end of the scale.  Because what does it even mean when you give a film a 1/10, as opposed to a two?  Or a three?  I mean, none of them are fuckable.

This isn't glibness.  The man who wrote Burying the Ex definitely uses a scale to rate everything, especially women.  That would almost be okay, in and of itself; or, if it's not okay, I'm probably still not going to stop doing it in my own head anytime soon.  But Alan Trezza—whose 2008 short film of the same name got him the funding to make a feature-length version, after he somehow conned Joe Dante into directing it for him—man, this dude rates, like, the parts of women.  Not just their breasts and butts.  Not just their legs and faces.  Alan Trezza rates their elbows.  Alan Trezza rates the scent of the back of their necks.  Alan Trezza rates their freeze-or-friend response.  To be sure, women aren't just objects to Alan Trezza.  He rates their personalities, too.  He's just never met any above a four.  That's why, for this movie, he had to create his own personal ten.  From scratch.

Ex is the story of a man named Max.  A poor put-upon soul is he: a twenty-something loser working a humiliating counter job at Bloody Mary's (of course his boss is a woman—I just grokked that), an L.A. horror-themed novelty shop.  Through never-revealed means, this garbage gig keeps Max up in a halfway-decent L.A. apartment, which he has festooned with the ephemera of his abiding horror fandom.  For Max, you see, has a dream, and that's to open up his own horror-themed novelty shop, though you suspect even La La Land can't support that many of those.

But more importantly, Max has a girlfriend, Evelyn.  Also through never-revealed means.  Don't be fooled, however, by the fact that the first proper scene in the film is Max getting his bones enthusiastically jumped by a woman who looks a great deal like our favorite bad-movie contacts-wearing specialist, and everyone's all-round 10/10, Ashley Greene.  No, Evelyn is a controlling and manipulative monster, and, the more we get to know her, the more it seems she's actively insane.  Worse yet, she's a hippie tree-hugging libtard, too; and Evelyn has busted Max's shriveled balls down to the point where he's changed his diet, his lifestyle, and he's even agreed to recycle.  Needless to say, she is not at all supportive of his big entrepreneurial dream, nor in the slightest bit respectful of his tastes.  Obviously, the next move for Max is to invite her to come live with him; Max is a spineless twerp.

This goes as well as can be expected, and within days Max is complaining to his hirsute PUA of a half-brother, Travis, about how much he can't stand her; and Travis, giving good advice for once, tells him to just break up with her.  At length, Max works up the nerve, but when Evelyn arrives to hear the good news, she's run down by a bus.  Unfortunately, this is not the end, and soon enough—as you likely guessed from either the poster or from your foreknowledge of Ex's position in the lower reaches of the already-not-very-good zom-rom-com subgenre—Evelyn crawls right back out of her grave to reunite with the man she will not, under any circumstances, leave.  Too bad for us, and too bad for Max: he was already feeling his way into another, better relationship, with a certain Olivia, the local ice cream shop owner, who shares his taste both for dairy and for crappy genre filmmaking, almost as if she were the sum total of all the fantasies of a man who wanted a woman who was essentially nothing but an extension of himself, but whom he could also realistically titfuck. 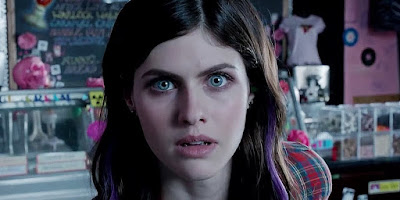 Wait, is she played by Alexandra Doddario?  You can go ahead and forget "almost."

And once again are we confronted with the weirdly circular nature of Joe Dante's career.  Last time, we remarked that a couple decades' worth of box office failure had pushed him back into the realm of more-or-less straightforward horror; and, on this count, The Hole was certainly no sin.  But it too failed, and now Dante was back exactly where he began: jobbing for gross sexists.  And it's remarkable, really, that a fella simply can't definitively state which Joe Dante movie is the most sexist—the movie with not one but two scenes dedicated to extended, multi-minute rape jokes, or this one.  Somewhat by corollary, it's hard to say which Joe Dante movie is worse.  Hollywood Boulevard (a 2/10, for the record) is shorter.  It's got that going for it.

Burying the Ex, on the other hand, is put together with more polish than the old Korman Klassic.  Which, obviously, isn't to say "a lot of polish": Jonathan Hall's cinematography is mediocre and hasty, neat bits of neon here and time-lapse photography there entirely notwithstanding (and even those look like they wouldn't be too out of place on TV); Joseph LoDuca's score desperately wants this wacky comedy to be a serious genre riff, and hence keeps threatening to break out into a legitimately-interesting electronic dirge, but it can never quite find the opportunity to do it; only Dante's trusty editor Marshall Harvey ever has much of a chance to do anything righteous with the film's form.  But even Harvey's work barely counts.  It only makes itself readily apparent with some isolated fun with splitscreen, modestly enjoyable for about a second, and in a bit of cross-cutting that Dante and Harvey probably thought was clever, contrasting sex and violence with eye-rolling stupidity.  (Meanwhile, this movie's special effects top out at that glaringly-blatant CGI fly which keeps orbiting Greene's rotting head in the latter acts, so badly composited into the frame that it looks like Naomi Watts could pinch it right off the screen.  I know Ex was cheap, but Jesus.)

Now that I think about it, it hasn't been seven days yet.  Should I be more worried?

I suppose it's worth giving production designer Freddy Waff and art director Geoffrey Brown a modicum of praise: the sets are always pleasantly busy and full of detail.  It's usually reference-drop detail, of course (it's a Dante film, and Waff and Brown are doubtless a pair of fellow travelers upon Dante's perpetual B-movie bandwagon), but it isn't always—Evelyn's redecoration of her and Max's apartment is certainly well-done, and actually does earn (in the technical sense of that word, anyway) the outlandish montage of evil zooms which Dante and Harvey throw at us, a visual catalog of each and every one of the physical manifestations of Evelyn's unforgivable personality.

When it comes to its personality, Ex does, at least, have one: unfortunately, it's the personality of a gobsmackingly-arch 1970s sitcom, dressed up somewhat with 2010s (more like 2000s) cultural signifiers ("holla!", for example, being a word that adult humans use in this movie), and a bunch of 80s-style crassness and the kind of blunt-force misogyny that even that decade didn't usually produce.  For Ex's misogyny comes off not as the result of unexamined attitudes or general indifference, or even as poorly-channeled sexual desire, but as a cruel and active force—a kind of psychological pornography for childish men that lets them jerk off the worst parts of their brains, instead of their cocks.  Oddly, it's never actual pornography: this movie has no leering nudity, and Dante doesn't really bother objectifying its women, visually, much at all—certainly nowhere near the way its script does intellectually.  It's strange, and I honestly don't know if that makes it even slightly better, but I do know that the reason real women don't like the movies you like is that the movies you like are like this.

It's gratingly on-the-nose in every respect, populated entirely by the most basic cartoons: the evil bitch; the sad beta she does everything to but cuck (I'm astonished that Evelyn's love is treated as psychotic but, for what it's worth, genuine); the big-boobed MPDG; the goofy-looking fat guy who lives with his mom, yet is unaccountably still fucking all the hottest women, sometimes more than one at a time; Dick Miller, interrupted during a dump.  Dante has done wonders with live-action cartoons before, but maybe the worst thing about Ex is how consistently unfunny it is: its humor almost exclusively revolves around the most hidebound "women nag like this" "jokes," and whatever jokes aren't that are all bound up in this movie's tremendously boring zombie riffs, punched-down with lazy zombie makeup, and even lazier zombie horror.

The cast, at least, is alive: the film is almost nothing but bad lines (and only the one lonely great one—that both I and Isayc from the delightful Now In Full Color independently deigned to use that line for the title of our respective reviews must say something), but even being 98% bad lines, Ex is surprisingly full of good reads.  Frankly, it's a little sad to see decently-talented B-listers like Anton Yelchin, Greene, and Doddario commit so hard to these particular bits, but give them credit, they certainly did.  Arguably too much, in fact: Yelchin is indulged with more than one scene that lets him treat Max like an actual character, with layers and conflict and such—and if there's one thing this story doesn't need, it's nuance.  Evelyn's a cunt.  That's the joke.  We do not need to see this quantity of bullshit mooning, especially in a movie that could only work, if it was ever going to work, as a full-on farce, as it's already a movie that doesn't grant the littlest margin of personhood to anybody else.

Yet, clearly, there's something to be made out of all this, about relationships that outlive their demise, about how breaking up can seem like it's as hard as murder; that's why this subgenre exists, I guess, even if in practice it doesn't really seem like it should.  Ex, as you know, takes on virtually the exact same premise of Life After Beth, another movie about a girlfriend going undead and stinky.  They share barely anything beyond their premise, true, but they do still share the common ground of having screenplays that suck in the same extremely specific way: the incredibly dull manner in which both films' zombie girlfriends are turned into talkative-but-barely-conscious agency-free morons by way of their resurrections, which isn't nearly as amusing to watch as either film thinks it is.

Then again, Beth is never once terrible in quite the same amount: that movie is about grief and letting go; the basic metaphor of Ex's narrative is sort of like that, except it's mostly about how awesome it would be to kill the woman you're having sex with, then replace her with a double-X clone of yourself.  I don't especially like to write about gender at this length.  I hate to treat gender issues as the sole dimension upon which a movie can be judged.  But when "gender issues" are all Burying the Ex even has, and when its issues with gender destroy everything else it could be—gracious, the movie could be improved, on a fundamental structural level, simply by making Olivia an active partner in the plot, which of course she isn't—I don't have a lot of choice in the matter.  Oh, I know: there is an audience for this.  It's just a pity that Joe Dante was in a place, in 2014, where he decided to make a movie that was pitched, apparently, at r/incels.