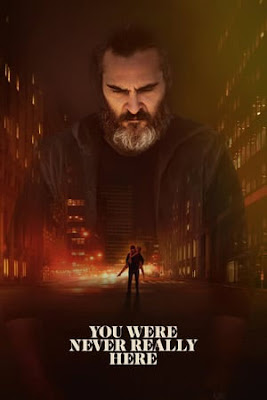 YOU WERE NEVER REALLY HERE

The raves go too far, as they usually do; but You Were Never Really Here remains a compelling piece of filmmaking, even as it only occasionally grasps that it is a narrative work, whether it actually wants to be one or not.

2018
Written and directed by Lynne Ramsay (based on the novel by Jonathan Ames)
With Jaoquin Phoenix (Joe), Nina Votto (Ekaterina Samsonov), and Judith Roberts (Joe's mom)

In cinema, there are two and, for most part, only two modes available to men capable of righteous violence: 1)broken and fucked-up and barely capable of functioning in society; or 2)awesome.  (Occasionally, though, it's both, and that's why we enjoy Mad Max movies.)  In the case of an art film that received a seven-minute standing ovation at Cannes, you win no points for guessing that the mode Lynne Ramsay chose for her tale of the surname-free Joe, a retriever of trafficked girls and punisher of their abductors, is Number 1.

It's the kind of hyperbole Cannes is somewhat infamous for, but you'll also be able to figure out from first principles that the sheer rapture with which it was received there, manifested as the sort of encomium typically reserved for dictators who can have you shot for being the first to stop clapping, was not for its plot; and that's even more the case here than usual, because You Were Never Really Here is really not about its plot as much as it is the things it can do with that plot, and this is certainly the best way to approach it, because that plot is just terrifyingly trite.  Beginning as a portrait of a traumatized veteran turned urban mercenary, around the half hour mark (and Never Really Here, refreshingly, isn't long), Joe runs afoul of a terrible conspiracy that stretches up into the higher echelons of political power, whereupon the young woman he just rescued is snatched right back and Joe is almost killed.  But Joe does not die, yet, and this sends Joe upon a dire crusade against the world, where he loses what little remained in his life, and must face down the legion of non-player characters arrayed against him, who pose as much challenge to his trademarked ball-peen hammer ($15.99) as the featured extras always do in any vigilante flick—and, indeed, possibly less.  But in the end, our depressed hero may have found a path to redemption, or oblivion, or both.

So, it is both affrontively cliche, in every last beat of its drum, and borderline irresponsible, given that what we have here is a movie so close to Pizzagate: The Motion Picture in its narrative particulars it would literally only take a few establishing shots of a pizza parlor and the replacement of a few character names to get there all the way.  You are surprised to learn, or at least I was, that it is actually based on a book (by Jonathan Ames); and you really do have wonder what the hell that thing must be about, because this boilerplate is not even remotely what the movie is concerned with.

Instead, Ramsay has set her sights on two or perhaps three goals with her film, all of which she achieves, and (better yet) all of which wind up achieved, rather elegantly, through the same fundamental cinematic means.  The first (and this is maybe the most overt of Ramsay's goals, or at least the one that puts it most firmly into the territory of "artistic experiment") is finding a strange and novel way to construct an action thriller.  It veers close to an anti-action thriller, but in fascinating ways that do remain thrilling, albeit in a sort of grim, nauseating, Ramsayish way.  To this end, Never Really Here has tendency to show the results of ugly, naturalistic action, without necessarily always showing the action itself; in the ellipsis, violence becomes negative space.  The film's centerpiece, that will stick with me as its most interesting scene (if perhaps not its most memorable, nor its best) is shot through what presents itself as security cam footage, cycling through a series of four cameras as Joe makes his way through a sex slavers' brothel, and the cycle does not overly care about what is "interesting" about this (though Ramsay does, endearingly enough, so it is choreographed with a certain staccato rhythm, albeit not one that might be found conventionally satisfying).  Often as not, then, we're flipping to a shot that has no subject at all, while, elsewhere in the house, Joe must be doing something awful to somebody.

Second, and only to a certain, standoffish extent, Never Really Here is concerned with Joe himself; it somewhat represents itself as a character study of a man who's faded so far into dissolution as a result of everything he's experienced that he doesn't want to come back.  It is that, but it's as oblique as a character study gets, and Joe (while not inexplicable—in fact, he's almost offensively explicable) is mainly explicated through Phoenix himself, whose burly, not-built-for-comfort physique, overwrought Santa beard (Shyamalan saw the future with Signs, casting Phoenix as Mel Gibson's brother), and hollow thousand-yard stare do far more to communicate "a guy named Joe" than all the kniving quick-cuts to Joe's overdetermined past ever do; though these are exactly what I'd point to and say "this does not deserve a standing 'o' of any duration," and they are also exactly what I mean when I say Never Really Here's "story" is trite to the point of being kind of lame.  Yet they are quick enough that you can still get something worthwhile out of them—perhaps just the way they're actively denied by Joe in the present, who's wiped out as much of his personality as he can while still being an active force in the world, albeit not much of one, and not for reasons as benevolent as the plot synopsis alone makes it sound.  (It's never entirely clear that Joe gets something more than a paycheck out of his work, either the thrill of hurting people who deserve it, or the satisfaction of saving innocents, and this seems like the right line for the film to take: Joe's a weapon, and, at best, one that happens to be pointed in the right direction.  Meanwhile, one of the film's cruelest touches barely registers, simply because it's outside the parameters of our protagonist's mission at the time: a nameless girl sitting in the out-of-focus background, moving just enough to remind us she's there and not being rescued by our man.)

Third—and this is where Never Really Here fully clicks—it's an effort to turn Joe's subjectivity into something concrete: Never Really Here is a film that hums and thrums along as it goes, and just as Joe himself often leaves the screen while we look at something else, his narrative fades into the background of an overwrought-as-hell soundscape, half very loud (and very good) Jonny Greenwood score, and half Paul Davies' symphony of diegetic noise, the latter ramped up and down in a way that owes very little to pure literal realism, and a lot more to Joe's point-of-view, and which never becomes a random cacophony—instead, it offers a rhythm to the film, made out of onscreen sound (coffee pots, traffic, et cetera), all dovetailing pretty flawlessly with Joe Bini's editing, and intended to keep you off-balance and always more aware of everything else going on than you are the void in the film's heart.  (On the other hand, You Were Never Really Here gets so much thematic mileage out of its name that it feels like cheating, like you were already told, "this is what our movie is about, please enjoy watching it through the lens we have provided you.")

"Enjoy" is a loaded word, though I did enjoy it.  It is dour and miserable, which fits with what I know of Ramsay (her last film, We Need To Talk About Kevin, is possibly only less dour and miserable because it scrapes up against the side of slightly-silly—though Never Really Here does at least share with Kevin the same whimsical fetish, namely for channeling its unpleasant violence through weapons that are not nearly as effective, but have more panache, than boring old firearms).  There is perhaps something more meaningful here than a mere depiction of how doing violence, and having violence done, can remove what makes a being human—for example, an underwater scene that gives Joe his life back, in what can barely be read in anything but overtly religious terms—but even the very final shots of the film still base themselves upon our hero's absence, rather than his presence, in the world.

The film it reminds me of most of all, then, and maybe this would surprise you though it shouldn't, is John Wick.  That was also about a void in the shape of a man (though that void cleaned up better), doing horrible things to horrible people, rather clearly because he had nothing else to define his life by.  It probably doesn't bear mentioning that Ramsay goes about it under rather different formal rules; but both films reach, more or less, the same place, even if, of course, Never Really Here takes a bitterer attitude about it.  The real difference is in effect: while both actually are technical exercises first, and stories second, John Wick doesn't quite feel like it is.  You Were Never Really Here does, and leaves me slightly cold as a result.  Not in the way I suppose it probably wanted to, but more in the way that any movie will do, when it makes absolutely no effort to hide its interest in being, above all, an experiment.  You could do worse than watching an experiment play out, especially when that experiment was as successful, on its own terms, as this one undeniably is; but I look at it and think it could have been even more.