20 years ago, we took over their land, their cotton, and their daughter 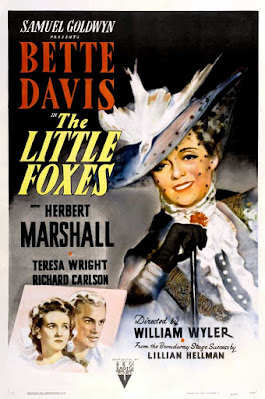 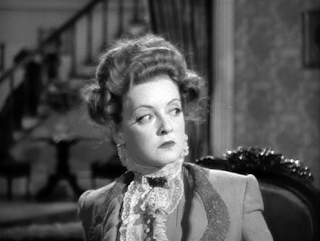 In late February 1942, John Ford's documentary about Hobbits, How Green Was My Valley, secured its place as one of the most infamous winners of the Academy Award for Best Picture—it won a lot of other awards besides—by cheating one of the best movies of the 1940s out of the statue, a movie directed by the best filmmaker of his era, photographed by the great Gregg Toland in an innovative style instrumental for confirming the possibilities of deep composition as a cinematic tool, and written by writers seething with sour class consciousness.  I also hear nice things about Citizen Kane.
Well, at least Citizen Kane won for its screenplay.  (The most imposing thing about Kane, meanwhile, that Gregg Toland photography, is actually the one where you could make a reasonable argument that the How Green Was My Valley Oscar was not unfairly awarded, though it's not an amazing argument.)  I suppose I'm not saying that William Wyler's The Little Foxes is better than Citizen Kane, though I think I might like its screenplay and its straightforward pacing better (and while Foxes was likewise nominated for a screenplay Oscar, as an adaptation of Lillian Hellman's 1939 play, it was not in competition with Kane for that honor).  But the main thing is, good as Kane may be, there were other movies made before we were born.  Many are interesting in their own right.  There were other movies at the 14th Academy Awards, too, though it was a strange Oscar year, with a Best Picture crop that, as far as I've determined—I've not seen all ten of them—seems split between movies that are pretty great (Kane, The Maltese Falcon, today's subject) and movies that retain some inexplicable cachet but are nevertheless kind of dreadful (Valley, Here Comes Mr. Jordan, and, in a strong contender for Hitchcock's most bafflingly pointless effort, Suspicion).  So, sure, The Little Foxes (probably) isn't better.  But I needed an opening paragraph, and, in its much more modest (that is, less flamboyant) way, it is awfully good. 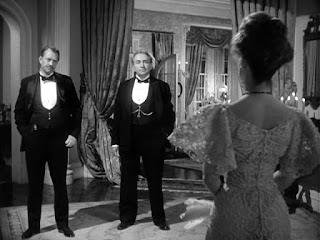 So: as with Wyler's Jezebel, Foxes brings us back to the South—I don't believe the state is named, but going by the geography the story lays out, it's either Mississippi or Louisiana.  It is not the Old South, however, but a post-Reconstruction South—1903—and one of the quietly nasty things about Foxes is how much remains unreconstructed, with the same basic ugliness of white supremacy left largely in place, a fact suggested by a black hymn or an approximation thereof over the opening credits, and underscored by the omnipresence of black characters confined to servile roles.  (And unlike in Jezebel, there is an actual awareness of this tension.  It still doesn't quite escape occasional, jarring racist caricature.)  Well, the main difference, for our purposes, is that the upheaval of the Civil War two generations prior has provided an opportunity for one family, the Hubbards, to move up the ladder.  There is Oscar Hubbard (Dan Duryea), who married into crumbling Southern aristocracy when he married Birdie (Patricia Collinge), taking over the failing Lionnet plantation alongside his brother Benjamin (Charles Dingle) in the process, and he's made it clear over the last twenty years that the name and the property are all he married her for.  And there is their sister, Regina Giddens (Bette Davis).  The children of shopkeepers, their family persevered and even prospered as the landowning class fell, and for forty years they've had many the opportunity to express their strivers' resentment of where their people had previously placed in the hierarchy of Southern whites.  Regina is bitter for other reasons, as well, being disinherited in favor of her brothers and consigned to marrying Horace (Herbert Marshall), a man who'd likewise adapted to the new order of things, and has at least managed to make himself comfortable.  Yet Regina desperately wants real wealth, and has dreams of taking herself and their daughter Alexandra (Teresa Wright, in her screen debut) up North to live in luxury and take their rightful place amongst the true elite.
Regina now has her chance to do just that, for Ben and Oscar have lately been courting a Chicago industrialist to help them build a cotton mill—as local journalist David Hewitt (Richard Carlson) explains, noting how his paper cheerfully killed any mention of this, but as Ben and Oscar will quite openly admit in private, the most attractive aspect of the venture is that their decaying Southern village boasts the single lowest average wage in the Union.  But Ben and Oscar, having come up short, have invited Regina to become their third partner, each committed to providing a $75,000 investment that, undoubtedly, will soon make them millionaires.  The only obstacle is Horace, presently invalid with a severe heart condition and under the care of doctors up in Baltimore.  He's had a great deal of time to take stock of his little legacy, and when Regina sends Alexandra under false pretenses to drag him back home, he flatly refuses to have anything to do with this vile exploitation.  Which makes him a target of intrigue from his wife and her brothers—and worse than intrigue. 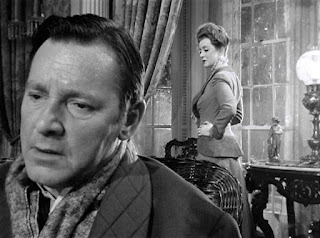 For whatever reason, it doesn't occur to Horace that factories do have to be built somewhere and as the most important of the partners—indeed, as Regina has cagily discerned, her brothers need her husband's money, and there's no law that requires that a one-third investment automatically equal only a one-third share—Horace could theoretically dictate, for example, some ameliorating conditions for the deal, and this would do more to put his ideals into practice than his actual course of action, which is basically, "fuck you, but feel free to exploit the poor someplace else."  Then again, it's not like he'd be around long enough to ensure the follow-through.  Hence the conflict we have is starkly black-and-white (mostly figuratively, but sometimes also literally), between the ravenous amorality of the Hubbard clan and the purity of those who oppose them, and I don't think I could argue with a straight face that Foxes is not, fundamentally, a reductivist political screed that you probably wouldn't be surprised to discover was written by a recovering Stalinist with additional dialogue by her leftist friends and family.  The few nuances the play appears to have had—Regina is a more sympathetic figure there, stifled and even made precarious by the patriarchal world around her—wind up blunted by Wyler's vision for the story, with only the barest hint of the tragic dimension still maintained within the Hubbard sister, though it's worth noting that this tragic dimension does, at last, find a privileged and unforgettable place in the very final shot of the film, which witnesses Davis receding into inky shadows like a wraith.
And all that, you know, is a totally fair critique that somebody else could have.  But to my mind, what it loses in complexity it more than makes up for in sheer righteous anger and almost unalloyed cynicism.  There is a little bit of optimism in this film, but very little, really only a promise that in some possible future—perhaps the then-present of 1941, but even here, it isn't that sanguine about it—the good people of the world might collectively find the strength and courage to stand up to the creatures of the title (the Song of Solomon's little foxes, who chew up the soft grapes and ruin the vine) and put a stop to their all-consuming greed.  The only other glimmer of justice is that maybe some of those predators will wind up sad and broken in turn, which is better than nothing, but isn't especially helpful to their victims. 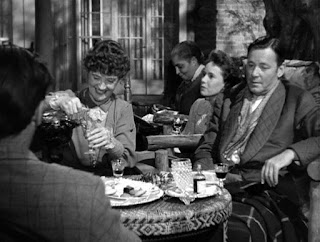 Its heroes, accordingly, are mostly useless: Birdie is a dissolute prattler, long past being able to retake control of her own destiny, and lost in a guilt-tinged nostalgia for a pretty world of master and slave; David, who was invented for the movie to try to balance the scales even marginally, talks a big game but is mostly only effective at condescending his way into Alexandra's affections; the strongest weapon any of them ever manage to wield is Alexandra's ability to stop loving her mother, which, you'll agree, is not a solution of general applicability, and, truthfully, not even a solution to the problem at hand; it would not be a huge leap to presume that Addie (Jessica Grayson) is a child of Birdie's family's slaves, and, like the other servants, precious little has changed since then; and Horace's heart, pure as it is, is also on its last beats.  There's one scene that finally places all of the good guys together, beginning pleasantly as Birdie plays piano and Horace sits on the patio and they all gather and, for nearly the first time in the film, everyone in the frame is actually nice.  Even here, the conversation quickly grows grimmer, till Birdie has what amounts to a breakdown, Addie visibly bites her tongue over a poor choice of words, and Horace is left to glumly make resolutions from his wheelchair.
If this isn't meant to be allegorical, it couldn't do a better job if it were; the idea that contemporaries had no idea that Franklin Roosevelt used a wheelchair is, if I'm not mistaken, something of a myth.  A number of films from 1941 had the Gilded Age and the Depression on their minds, Valley in its oblique and muddled way, and Kane so directly it almost got the film destroyed, and even Mr. Jordan is about how the world would be a better place if a rich guy got murdered and a random poor took his place.  Foxes, though, might be the most New Deal of them all, and the most actively furious at the stumbling blocks its enemies had put in the way; it is absolutely unyielding in its depiction of the savagery that small money can get up to.
And I realize I'm making it sound like homework and vegetables, dry and schematic.  It's schematic, maybe, but not dry.  Foxes is very much a slow burn, but it pays off, picking up more and more momentum as it winds its way through an increasingly convoluted plot, and desperation seizes villains who become more and more willing to take extreme measures.  Foxes, however dour its prognosis of the American Way, remains a shockingly fun movie—with more emphasis on the "shocking" part than the "fun," I suppose, but it's an amazingly watchable film.  Hellman's dialogue is perfect chamber drama material, with its petty backbiters who mostly all hate each other but remain bound by blood and commerce and compelled to pretend otherwise.  It's frequently abrasively funny.  It's sometimes even bleakly hilarious: I don't know if it was even in Hellman's play, but my favorite grace note arrives when Oscar's idiot failson Leo (Carl Benton Reid)—who's become, almost by accident, the lynchpin of the plot—finds his uncle's wheelchair while he's waiting for the man to die, and just starts fucking around with it, up to and including popping a wheelie.  It reminds me—in a good way, I mean—of my favorite parts of the old daytime soaps, where the evil rich plotted and schemed against one another.  But no daytime soap was ever directed by William Wyler, written by Lillian Hellman, shot by Gregg Toland, or starred Bette Davis. 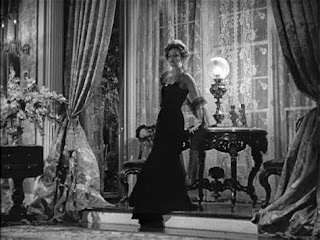