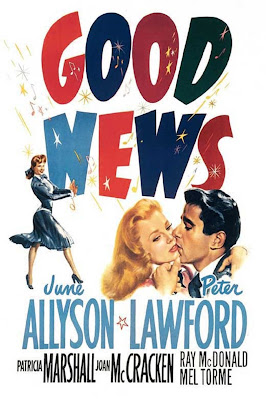 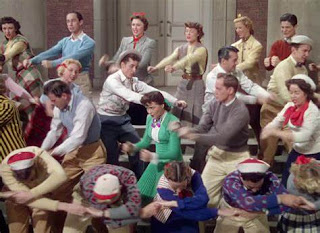 There is, I've gathered, fairly ample controversy about the evolution of the integrated musical over the course of the first decades of the 20th century—you know the kind, the musical that uses music to advance plot and character, rather than using plot and character as a scaffold to contain a bunch of otherwise-unrelated song-and-dance routines, assuming it uses plot or character at all.  It's always kind of baffled me that this took development: you'd think this would be obvious.  Of course, it sort of is—operas and operettas are "integrated musicals," even if they're usually considered different arts—but Western musical theatre, emerging out of the class distinctions in the early 1900s, was strangely resistant to it.  The integrated form coalesced slowly as stuff like the Princess Theatre shows and Show Boat came along; you'll find reference to the trend not being fully-fledged until Oklahoma! in 1943.  1943.
The film musical, anyway, took even longer for the format to become ascendant.  As any fan of 30s, 40s, and 50s musicals is very well aware, the modal story of a 30s, 40s, or 50s musical involves showpeople who want to put on a show, and sometimes we see part of that show and sometimes we don't (or, in a Berkeley musical particularly, we see something that is obviously not the show, and rarely seems like it could even be the idea of the show), but in either event, this is the flimsy excuse for why these weirdos keep prancing around and singing at each other (and, again, that's if most of the film even bothers to be a musical at all).  You frequently wonder if the show-within-a-show does the same thing, and if it's therefore all a recursive nightmare of nested realities.  The MGM musical is as guilty of this as anything, though by the 1940s there were real steps being taken to do something besides "Eleanor Powell wants to be a tap-dancing star," not, of course, that this was ever a bad foundation for a movie.  Liza Minnelli calls 1944's Meet Me In St. Louis a big first step.  I presume this means she somehow blanked on The Wizard of Oz (or, you know, she was being paid to talk about Meet Me In St. Louis on a DVD extra), but that seems forgivable in its way; the more I learn about Golden Age musicals, the more bizarrely sui generis Oz seems.  As for St. Louis, leaving aside whether Liza Minelli might've been ever-so-slightly biased towards the production where her parents began the process of procreating her, I daresay it's no great feat to integrate plot into music if you have precious little of either.
None of this is to say that Arthur Freed's 1947 production of Good News was any first itself, besides, anyway, being the first feature of director Charles Walters.  For starters, the 1947 Good News was only a new adaptation of a 1927 play that got an MGM adaptation once already in 1930, which, from surviving clips (it's now lost), looks pretty fun—no mean feat for an early sound musical—though by the same token, "the early sound musical" part means a very proscenium-based visual scheme, while those clips suggest a song-and-dance revue was never too far from anybody's mind while they were making it.  What I am saying, then, is simply that Good News is extremely good at being an integrated musical in an era where that was almost radical filmmaking by itself.
I expect the play was too—the only part of the film that stands out, unhammered-nail-like, is its one original number, though even this makes a half-assed attempt to pretend it's part of the story, and it's good enough you might not begrudge it its intrusion (well, not just because it's an add-on, at least)—though the film's screenwriters, Betty Comden and Adolph Green, saw fit to perform a major overhaul, with pretty much no element of the book failing to be changed either slightly or significantly.  Comden & Green couldn't have taken all that much of their lead from the 1930 Good News; the pre-Code film's bawdy humor ensured it would remain in the dustbin.  The '47 version certainly goes hard at comedy, and finds a lot of it, but outside of a few biting exchanges, it's funny in that endearingly-dorky, whitebread way that's nearly as much a part of the MGM-style musical as singing and dancing.  The genius of it is that it's so aggressively whitebread that it tends to reach a level of self-parodying sublimity.  It's so pronounced that it's practically kitsch, though I'd be more inclined to call it knowingly camp, and not just because Walters was more-or-less openly gay.  He intensifies it, but it's already present in the script: the sarcastic nostalgia it has for its time period—for, naturally, between 1927 and 1947 Good News had become a period piece—suggests, along with Corden & Green's more famous Singin' In the Rain, that their attitude towards their own childhood decade was best expressed with something like a smirk. 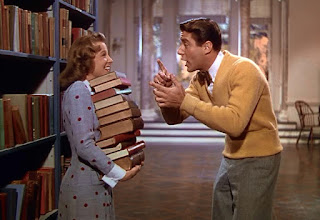 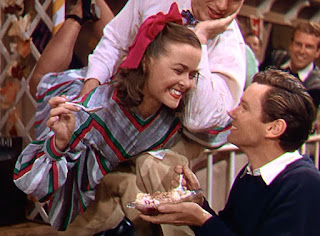 For all that, my favorite musical number doesn't even involve dancing, but does involve almost as much choreography, as Walters winds his way through a sorority party and nearly every new shot occupies a new, distinct emotional state; effectively the conclusion of the first act, "Lucky In Love" confirms the personalities we'll be spending our time with, by way of how lucky (or unlucky) they feel, binding them together in a single coherent tale of romance so that the screenplay, ultimately, doesn't have to.  (It's also the banger I mentioned, and ends with some actual melancholy, thanks to the foggy, velvety crooning of Mel Tormé.)  Even before this, there's "Be a Ladies' Man," involving men marching and posing across campus, singing about how to be masculine, and solemnizing their agreement to be more successful heterosexuals with a handshake after a tousle through a bush.  Because I'd just watched Crybaby, this is where I realized that John Waters was never as good at camp as the things he's poking fun at already were.
The remaining question is whether it has room for any actual drama, and I'd cautiously hazard "maybe? slightly?": it's more amusing than it is anything else, but Tommy is such an asshole idiot, that it's easy to sympathize with Connie's frustrations with him; and, in a sense, this is maybe one of the most pointed turns a mid-century musical ever managed, because could you really expect the most popular and desirable guy in school to be anything else?  Meanwhile, Connie's enmity with Pam results in some satisfying nastiness that permits Allyson to make Connie the funniest character in the film.  The plot is solidly-built enough, and though it resorts to contrivance by the end (really, it resorts to contrivance well before the halfway point), it's avowed farce—it plays completely fair on that count.  Half the reason I love it might be that it doesn't fuck up its ending.
As for the rest, I suppose it's simply that Good News represents the mid-century musical operating at a level that, for all I adore the genre, it usually doesn't reach; it is the best embodiment of movie musical fun this side of, well, Singin' In the Rain.  "Consistent" might be the least ecstatic-sounding compliment you could pay a movie, but quantity can have a quality all its own, they say, and a musical that never sets a foot wrong is rare indeed, whereas a 1940s musical where every single scene is good or great—let alone where almost every scene has an actual point—is scarcely anything short of miraculous.
Score: 10/10
Posted by Hunter Allen at 4:05 PM