The net is vast 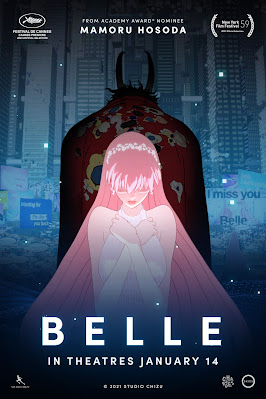 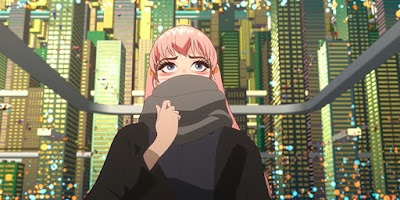 Mamoru Hosoda is a big enough name that it occasions mild embarrassment to admit that until now I've never really liked any of his movies that I've seen, including his last, 2018's Mirai, one of those sacrificial foreign entries that the Academy uses to make its Best Disney or Pixar Animated Feature category appear slightly less parochial; and I've skipped several, for example the one about the widowed furry.  Even so, I've always recognized that there's a lot to admire in Hosoda even if his movies weren't always good; I could see how someone could respond to their sincerity and visual imagination, even if I've tended to find his films let down by disjointed narratives, clunky emotional appeals, and not-all-there 2-D/3-D compositing.
That's not actually changed with his new film, Belle—not the disjointedness, nor the clunkiness (the compositing's at least more narratively-useful), and I assume it represents a new peak for Hosoda's exploitation of anime's vastly higher tolerance in comparison to Western storytelling modes for characters soliloquizing in the bluntest possible terms—yet fully fifteen years after it left the station with The Girl Who Leapt Through Time, I guess I've finally got on board the Hosoda train, eager to catch up with the Hosoda films I missed and willing to reevaluate the ones I didn't.  Maybe that's because he did something different with Belle that finally won me over, which is a little dubious, given it's such a blatant spiritual successor to 2009's Summer Wars, but it's at least possible that Belle's particular blend of loosey-goosiness and pathos is simply that much better a vehicle for Hosoda's wild expressions of passionate and not-always-obviously-germane interests than anything I've seen so far.
And no matter what else it is, it's got to be the best TRON of 2021, a low bar but a real one, as last year turned out to be the year that the nascent genre of movies about people living inside computers exploded; Belle reminds me that they don't have to be soul-sucking cinema-is-dead abominations.  Oh, and it's also 2021's best musical, animated or otherwise, and there were an unusual number of those this past year, too.  Ultimately, you can tell that Hosoda (and, hopefully, his employees, though a lot of this was actually done at Ireland's Cartoon Saloon) loved making this, and if it wasn't made to be a compendium of the filmmaker's interests, it certainly seems that way, and surely must encompass most of them: the sad kids of dead parents; colorfully goofy pastiches of a fanciful futuristic Internet; the things computers permit animators to do with 2-D cartoons these days; and, given that a lot of anime filmmakers are passionate about the above-listed things, I shall add that apparently Hosoda loves, in particular, Beauty and the Beast, by which I mean Disney's Beauty and Beast, which he loves to an insane and indeed borderline-actionable degree.

It is, nevertheless, and like Summer Wars before it, a movie about the Internet that feels like it was written by somebody who's never used the Internet and has only read books about it from the late 1990s (not even non-fiction books), and so it's also at turns incomprehensible and incoherent and operating at bizarre parallels to actual life as it is lived online today or presumably shall be lived in Belle's own next-Tuesday-A.D. setting.  As its finer points require explanation, we begin with a primer on Belle's answer to Summer Wars' virtual world, OZ, which has been streamlined in the intervening twelve years, in that now it's only one Roman character, U.  (As in "you are U, and U are you," the service's tagline, which pulls something like triple duty of being slightly clever in itself, a satire of its kind of cloying tech company slogan, and a genuine thesis statement, smartly hidden in plain sight.)
This winds up somewhere between omniscient narration and advertising copy, but it sets up the parameters of a universe where nearly half of humanity has plugged into a Matrixy simulated reality via a neural link.  We get our first look of U's public square (which is more like a public cube, as U's baseline user experience is floating around in a sea of teeming thousands in a vast, gravitationally-untethered three-dimensional space) during an unusually productive in medias res opening, as a rousing J-pop anthem rises in the sound mix, and out of the chaos of all the floaty, shiny stuff emerges a colossal humpback whale barnacled with speakers.  On its nose rides our heroine belting out one of her famous songs, which Hosoda gratifyingly permits its natural length.  This is Belle (Kaho Nakamura), famed Internet singer resplendent in the almost alien beauty of a digital avatar.  Obviously, after this my devotion was going to be hard to shake.
Like Hannah Montana before her but moreso, however, Belle is really just Suzu, a shy mousy teen with essentially only one friend, Hiroka (Lilas Ikuta), so let's circle back: Suzu's had a hard time of it for years, since her mother died saving another child during a flood and her dad (Koji Yakusho) effectively sealed himself away in his own pocket universe of terse grief.  Presently, Suzu spends her time with Hiroka watching on with a listless envy as popular girls like Ruka (Tina Tamashiro) have enjoyable lives and get to be attractive to boys.  Suzu herself has a crush on her childhood classmate Shinobu (Ryo Narita), who's technically her friend, but only after his fashion, in that he's conceived for himself the role of Suzu's guardian, making sure she doesn't get bullied, or get too sad, or jump off a bridge, which is the kind of condescending relationship that can only ever be so satisfying.  Once a little musical wizard, Suzu hasn't been able to bring herself to sing at all since her mother's passing; her memories of music are so tied to her mother that even trying makes her physically ill. 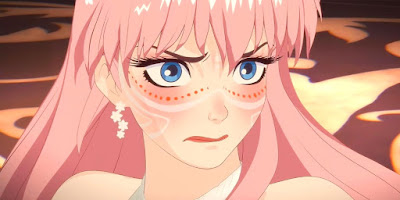 Accordingly, she's built upon the lightly-caricatured realist principles of a Disney heroine (and the other denizens of U, being mainly weirdos, on the principles of Disney sidekicks) in pursuit of the old illusion of life.  That probably signifies something in and of itself, but I tried to think of another anime character that has stable, anatomically-functional lips or nostrils, though the flipside of the coin is that the digital self is far more fixed in her image than the "real" one.  (I cannot say if this is meaningful or just a byproduct.)  Now, this is mainly the expressive face: the body is an odd amalgam of Disney princess and noodle person, though even this resembles later Disney Renaissance heroines, and when I learned that Disney stalwart Jin Kim worked on Belle as a designer, I was pleased to find that he came into his own at the studio during that exact period.  Ultimately, too, Suzu's own real-life physicality comes into play in U, and they split the difference between these incredibly different styles extraordinarily well.
The Dragon is likewise a brilliant creation, part boar, part crocodile, and in very large part, wouldn't you guess it, Keane's Beast, and U must have unique and personalized locations, even we don't see any of the rest of them, though calling the one it gives us "unique and personalized" may be inaccurate, and for a good reel Belle becomes a nearly shot-for-shot remake of Beauty and the Beast, or at least remix, done up in an abstracted haze.  It's really wild (its nearest comparison is the Shining sequence in Ready Player One, except this is pure homage rather than fan-service disguising satire), and in its repurposing of the iconography (including the freaking rose), it winds up finding exactly the right resonance to work as its own thing for its own goals.  It's absolutely flattening to find a movie in 2021 using nostalgia to make something that's even good, let alone something new.
So it's just a profoundly beautiful piece of work, and I've really only scratched the surface.  (The last musical number hits you with the kind of maudlin go-for-broke sincerity that I can't help but wholeheartedly respond to, and it helps that I really like all the songs: the brash first one is still probably the best, as the rest are slower, more sensitive ballads, but they all benefit from the kind of overdone, even gaudy production work that I think I have to accept is my "taste" in music, without, remarkably, seeming to need to do much for Nakamura's voice, so it does feel a step to the left of a lot of modern pop, J- and otherwise.)  There's so much visual invention here, on top of a story that's at least compelling in its shaggy approach to its characters.  Now, pacing-wise, it's sometimes jagged as all hell.  It's not always well-done: the way the movie barfs up Suzu's dead-mom backstory (rather more literally than you'd expect, now that I think about it, so maybe it's even a sly joke) in a Malickian montage is jarring when we've barely gotten past the long, dense infodump we started out with, though at least it's good on its intrinsic impressionistic merits and its bleak emotions have real impact; structurally, of course, the movie is so Goddamn eager to get to Belle-the-star that it presents this as a one-step process, with startlingly little time to either set up or even explore that status quo before the Dragon plot kicks in.
The movie's a bit of a mess, then, but a glorious one: the upside is that it's endlessly surprising and weird, on top of being intoxicatingly pretty.  I'm not sure that I see what others have seen in terms of really heavy thematic weight, but maybe that's because it's mostly invested in what online existence means to these particular folks rather than grand social statements; there's plenty here to use as a jumping off point for whatever Internet-related subject you wanted to tackle.  It's emotionally heavy, though, which may be the confusion (the unexpected climactic Rear Window riff gets inordinately heavy, if that's what you're after, fully three heavy wallops in a row).  Yet one of the things I like most about it is that it's such a breath of fresh air in a modern sci-fi landscape defined by techno-dystopias.  There's reason to mistrust Belle's naivete, but it works; I wouldn't trade its vision of an Internet where connection and meaning are possible just because in our world the Internet's well on its way to destroying civilization.  Belle comes down unmistakably on the side of the future anyway, and if it were just a gorgeous and vibrant cartoon, that'd be enough, but the full-tilt optimism of it is so diamond-rare that I can barely restrain myself from calling it a masterpiece in spite of every flaw.
Score: 9/10
Posted by Hunter Allen at 10:24 PM