What a disaster: God went down with the Titanic 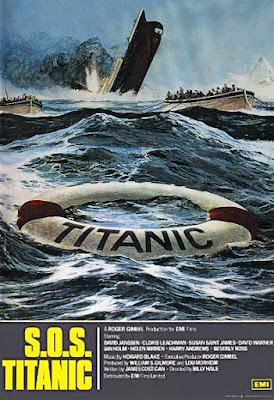 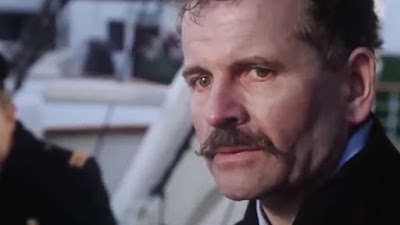 The disaster film in the 1970s was never keen on using real history as a backdrop for its experiential thrills.  I doubt there was any particular hand-wringing involved in this; the likeliest explanation is that the disaster filmmakers of the 70s simply wanted to have complete control over the narrative and aesthetic dimensions of their catastrophes.  Whatever the reason, despite twenty-odd theatrically-released American disaster films throughout the decade, the only one to claim a basis in true events was 1975's The Hindenburg.  You'd think somebody would've taken on the other immortal transportation disaster of the early 20th century, the sinking of the RMS Titanic: enterprising early filmmakers had been making movies about the Titanic since before carrion-feeders had even picked its victims' bodies clean, the very first bring an autobiographical one-reeler starring and co-written by actress, Belle Époque influencer, and actual Titanic survivor Dorothy Gibson, released just 31 days after the sinking.  Yet in the 70s, Hollywood's spectacle-mongers scrupulously avoided it.
But not everyone did: for in 1979, in the midst of the genre's collapse, Britain's EMI Films gave the ur-tragedy of the true story disaster flick its moment in the sun with S.O.S Titanic.  This retelling would never be theatrically released in the States.  It did get a theatrical release in Britain and Europe in 1980; but we don't count that, and, unfortunately, it signifies our return to the trenches of disaster cinema on the small screen, for despite its fundamental Britishness, it appears to have been made expressly to be sold to American television.  Thus it aired on ABC on September 23rd, 1979, making just enough of an impression that if you reminded someone that, actually, there is a feature-length treatment of the Titanic disaster between 1958's A Night to Remember and James Cameron's 1997 epic, they might not punch you in the face for it.
If we do include it on the list of features to deal with the sinking, then, S.O.S. Titanic is either the fourth or the fifth, depending on how you count Britain's 1929 effort Atlantic, which was sued by the White Star Line to keep the Titanic's name out of it.  (Likewise, depending on how you count The Unsinkable Molly Brown, it might be the sixth; but you should not count The Unsinkable Molly Brown.)  Besides Atlantic, then, its predecessors number three: the 1943 Titanic made in Nazi Germany as bizarrely-conceived propaganda, the first feature ever made about a ship actually called "Titanic"; Jean Negulesco's outstanding 1953 Titanic for Fox in Hollywood; and the aforementioned Night To Remember, also a product of Britain.
I've seen all these, so I can say that S.O.S. Titanic was not, in truth, the worst cinematic version of the Titanic story that had yet been made.  But this is only true if we do, in fact, consider Atlantic to be a "movie about the Titanic."  If we don't, it leaves us a tantalizing rhetorical avenue for claiming, no, S.O.S. Titanic actually is the worst.  (And even Atlantic has the excuse of being made at the advent of sound: I have rarely seen a more forceful reminder that folks just forgot how to make movies for several years, but its problems are hardly unique.)  The frustrating thing about S.O.S. Titanic, anyway, is that it is never "bad" in some overt, self-evidently horrible way.  At no point, for instance, does a rapping dog enter the picture.  It would perhaps have been a relief if it had.  To the extent it has any analogous scene—one involving an old rake taking an uncertain Molly Brown (Cloris Leachman) through a daring tango—this is possibly its best scene.
Its chiefest value, really, is that it obliged me to acquaint myself with the history of Titanic on film.  It's damning that all of its predecessors—maybe even Atlantic in its horrid brokenness—would be more interesting to talk about.  Whatever their sins (and one, of course, was actually forged in the dream factories of evil), every proper Titanic movie to come before had something to recommend it: the 1953 film serves up enough marital melodrama that it could've been a perfectly good movie even if it'd been set on the Olympic, and it develops a certain queasy fascination with the masculine virtue of "women and children first" that winds up devastating and subversive; A Night To Remember, meanwhile, is hard-nosed procedure, giving but an impressionistic overview of the passengers and crew before arriving upon the fateful iceberg and diving into the disaster with docudrama zeal; even the Nazi one at least has a point of view, spinning a batshit insane conspiracy yarn about stock manipulation and the Titanic's malign capitalist owners.
S.O.S. Titanic only wants you to think it has a point of view, and doesn't even want that very hard; the best it can do is a couple of bland disquisitions upon the class divisions of society as reflected in the shipboard hierarchy.  The film's actually "about" this so little that you may not realize "class" is a theme (let alone a structural scheme!) till you read it was supposed to be on the film's Wikipedia page.  What it feels like is filling the dead air that constitutes most of a numbingly-long 144 minutes.  (For completeness's sake, I did screen the longer, television cut, so that one's my fault.)  I never knew that you could fuck up the sinking of the Titanic, but here we are: a movie about 1500 people dying that's boring. 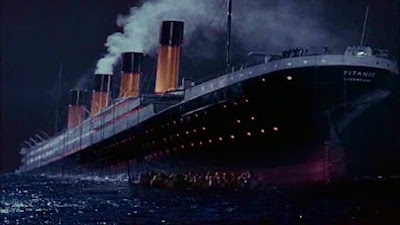