Write what you know 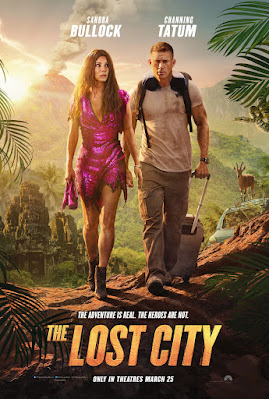 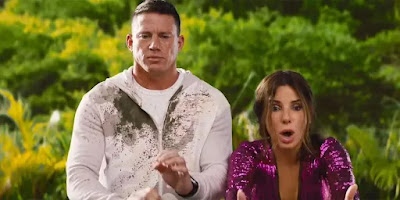 It also has a visual sensibility, much of it already locked in by the scenario and the setting and the location photography, but directorial siblings Adam and Aaron Nee show a reasonably strong eye for cutting together stunt-based action with a comedic bent, even if their demonstration of that peaks disagreeably early in the film's centerpiece rescue (and even if its denouement, a very nice "cool guys don't look at explosions" shot, would've been rather more effective if the Nees hadn't forgotten to remove the temp soundtrack of a butchered Pat Benatar song).  This was supposed to be the positive section, so going back to that, we have cinematographer Jonathan Sela managing some very fine sun-dappled jungle days and blue mist-strewn jungle nights.  It's awfully glossy, but it seems right, and I came around quickly to the heart of the Nees' visual scheme, that atrocious sequined purple cocktail dress which Loretta's publisher insisted she wear and which is now her only choice of clothing in a deeply incongruous green jungle.  It feels wrong in every single frame of the movie, but in a good way.
Now, there should be more here.  But the laughs are here; the adventure is here, even if it largely peters out; the romance is here.  It's fun in a deeply formulaic way—obviously—but, then, it's also a formula we haven't gotten to see much of in what feels like a terribly long time.
Score: 7/10
Posted by Hunter Allen at 8:09 AM