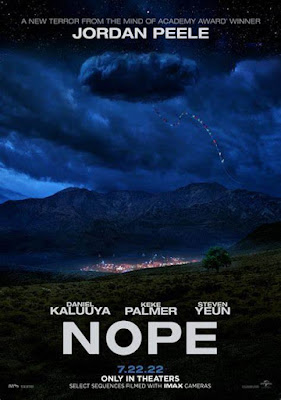 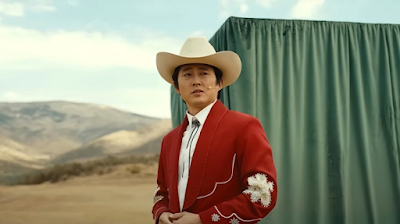 You know, people forget this, but the mystique of M. Night Shyamalan did not vanish in one sudden poof; it took years, and even after he lost it he could still score a hit with Signs, despite Signs being such a stupid messagey kludge of a movie.  Obviously, I bring this up for a reason: Jordan Peele has been courting Shyamalan comparisons since at least his second feature, Us, and with his third feature, the somewhat Signsesque Nope, he courts them so brazenly that I'm stumbling into a cliché to mention it.  The point is Peele shall likewise not fade overnight, and the good news is this means he still has time to establish a legacy for himself beyond "once, a new filmmaker took a superbly well-timed poke at the zeitgeist of the angry and/or self-flagellating half of what was then called America, after which he made some other movies, I suppose, none of which need be inventoried here."
Us, in any case, didn't poke at any zeitgeist, and wasn't designed to—it's as weirdly indulgent, though not in exclusively bad ways, as sophomore slumps get—but it did make money, and it dutifully received its perplexed-but-positive notices, thanks to the social horror brand name its writer-director had cultivated.  Nope has done so again, despite even more indulgence.  Not intoxicating indulgence, however, nor even an inviting indulgence.  It's the indulgence of a filmmaker working on an issue without very much to actually say about it, and with the bare minimum narrative scaffolding to support a thesis still-unfinished. Us had, at least, some inscrutable passion, perhaps even passion for its own inscrutability.  Nope achieves the improbable status of being almost anti-interesting and anti-fun (the underlying message of this movie, taken seriously, is almost that you shouldn't want to watch it), despite being built out of several objectively-fascinating elements, such as UFOs, bloody chimp attacks, and Daniel Kaluuya.  Nope is straightforward, at least: it is, in fact, a surprisingly close knock-off of Jaws, masquerading as a riff on Close Encounters of the Third Kind, the former ancestor obscured by the different iconography at play here (which is not especially like the iconography of Close Encounters, initially bearing a stronger kinship to Fox Mulder's office poster), but it is a Jaws knock-off at heart.  If it's a tiresomely deconstructive one, it's also one willing to make several recognizable lifts, including an idea from the finale of that film forced into the finale of this one via a new set of circumstances where it doesn't make sense.
So: in rural Southern California there exists the Haywood ranch, a family-owned business that trains movie horses, and which we are told—though I think I'm alone on picking up that we're not necessary supposed to uncritically believe this—represents the physical legacy of one of cinema prehistory's very first subjects, the unknown black jockey in Plate 626 of the first collection of moving pictures, Eadweard Mubridge's 1878 photographic experiment and naturalist investigation, The Horse In Motion.  There's a lot of possibility here, for a movie that examined if this is a lie getting at a deeper truth, but this isn't ever that movie; as far as I can determine, the jockey connection is here, thematically, because the movie is partly about the exploitation of animals in motion pictures, partly about the exploitation of people, and because Peele thinks the image of a black dude riding majestically upon a horse is novel enough that it can be the point of an entire movie, and while we can agree it's rarer in film history than it should be, it's possible to quibble with how that image is integrated into a movie that, predominantly, is about that flying saucer.
Anyway: until recently the Haywood establishment has been run by Otis Haywood Sr. (Keith David), whose stewardship came to an abrupt end one night when a whole trash bin's worth of debris rained down on the ranch and a buffalo nickel, dropping like a bullet out of the sky, lodged itself in his skull.  His son, Otis Jr. (Kaluuya) was there to witness this, and afterwards the ranch passed to him and to his sister Em (Keke Palmer).  She's not enthusiastic about this, and after seeing his father die inexplicably before him, neither is O.J., who's sullen and barely able to communicate safety protocols to his Hollywood clients—though, in fairness, they're some real dipshits, who appear to have lost the normal instinct of respecting the power of an animal eight times their size.  (Themes, you know.)  Between Em's overclocked, forced chipperness and O.J.'s depressive distraction, they lose their ranch's advertising gig, which is a big enough deal that they resort to selling off their horses to their neighbor, former child star Ricky "Jupe" Park (Steven Yeun), who intends to use them in the strange dream project to which his life's odd tangent has brought him, a hokey Old West theme park.  Of course, the main point of the scene at the commercial shoot was to introduce O.J. and Em to cinematographer Antlers Holst (Michael Wincott), a cinematographer so renowned that he does junky TV spots, just like Roger Deakins does or, for that matter, Hoyte van Hoytema.  Well, the plot needs his schedule to be clear, though maybe his character would've had more traction if he'd actually abandoned a movie when he joins the Haywoods in their quest.

Maybe that's why it isn't entertaining: there's a tendency to apologize for Peele's lesser works—"he certainly knows how to make a real cinematic experience!"  And sure: Hoytema is a master cinematographer (his extraordinarily blue nights and warm dusty days make Nope a solid-looking motion picture), and by all means is Peele proficient at composition and, like, lens choices or whatever.  But Nope is even worse at being a "blockbuster" than it is an allegorical diorama: it's so detached and indifferent to its characters, plot, world-building, hell, the kind of basic physical plausibilities that even a gonzo sci-fi movie can't ignore (there are some things so central to everyday human experience, like "how wheels work," that you can't futz with them even for the cheapest of thrills), and ultimately anything that isn't all-caps THEME, that the proficiency of it almost makes it worse.  The imagery can work (the inside of the alien!), and, Goddamn, it shouldn't be possible to get bored with a space monster chasing a guy on a horse through a field of wacky waving arm inflatable tube men.  But the abstraction of every single element into an airless world of attention-hogging symbol means it can't even really stay weird.
Score: 4/10
Posted by Hunter Allen at 3:55 AM