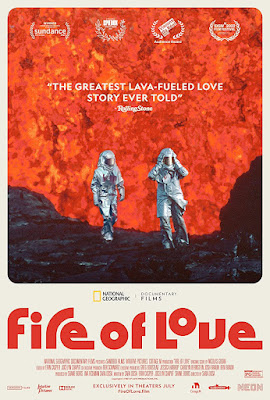 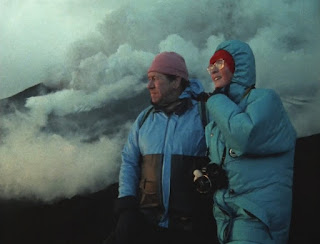 Fire of Love is the result of plumbing the archives of husband-and-wife vulcanologist-filmmakers Katia and Maurice Krafft, and, to get it out of the way, I adore it, and I thank its maker, Sara Dosa, for bringing us a greatest hits collection of the Kraffts' amazing, awe-inspiring footage in a slick little package.  But let us also say, upfront, that Fire of Love is not the perfect version of itself, and I mean that in the narrowest sense.  If the task of criticism is, ideally, to compare movies to some non-existent "perfect version," we won't necessarily even need to consider the things it wasn't trying to be, but perhaps should have been whether it wanted to be or not.  I am not a very ideal critic and I'm sure we'll be doing that regardless, but it is not per se "bad," for example, that Fire of Love is never (or rarely) much of an actual probe into the nuts-and-bolts process that the Kraffts developed over the course of their careers, nor is it "bad" that it's not much more of an investigation regarding their evolution into image-makers and consciousness-shapers above all, rather than humble scientists (or, for that matter, humble thrillseekers).
That raises the question of what it is that Fire of Love does want to be, and, as the title states aloud (a title I don't really like; the title of this review is way better, and only a non-starter because I don't think one in a thousand people would get it) is a sort of print-the-legend type of thing about two truly awesome people whose works should be known.  It is therefore, primarily, a celebration of that work—alongside (if a little more notionally) their love affair—and that's an eminently respectable position for a documentary to take, particularly so given the subject here: Fire of Love patently exists because of how much the Kraffts' joined lives already feel like a movie pitch.  Accordingly, it wants to be about the sheer heady romance (in both senses of the term) of a husband-and-wife team of daredevil vulcanologists, who dedicated their lives (in both senses of that term) to the documentation of volcanic spectacle, and who therefore, perhaps inevitably, perished together, when the volcanoes claimed their due.
That's pretty much it: it is not a terribly convoluted story.  (It's perhaps more like the first and third acts of a movie with no actual middle.)  It is maybe not even that interesting a story, if you wanted to be a jerk about it, and if you insist that stories have something psychologically dynamic at their core; it could be a coincidence (they share National Geographic as a distributor, but not as a production company), but the timeline of Fire of Love starts at something like the precise moment that Becoming Cousteau was making waves back in 2021, and it's kind of hard to not assume that Fire of Love exists in order to tap into the market that (rather gratifyingly) must exist for such documentary studies of mid-century educator-showpeople.  Jacques-Yves Cousteau, of course, had a fascinating life, one strikingly amenable to having a narrative imposed upon it, mostly in terms of personal and political tragedy.  The Kraffts' lives were fascinating, too, but their lives are more opaque; their lives seem to be entirely subsumed into the images they left, neither more complex nor less magical than the flawless myth that is contained in that one-sentence summary of their lives, "the married vulcanologists who died chasing their obsession."  There is a persistent impression that they became ever less invested in acquiring Cousteau-like celebrity; the impression they left, from what I've seen, is that their work as volcanic documentarians, and the activist message their work contains about the need for governments to develop early warning systems because these things are majestic precisely because they're apocalyptically terrifying, speaks entirely for itself. 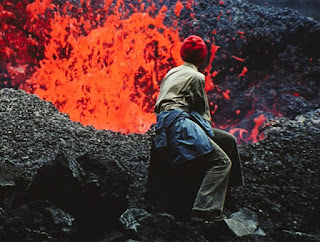