You know what really grinds my gears? 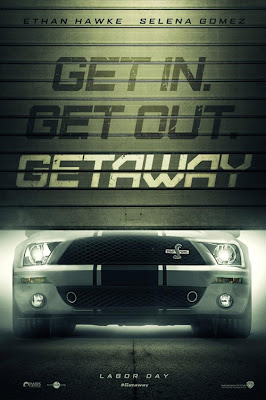 The perfect chase movie.  Edited.  The fuck.  To death.


The summer of 2013 will forever live in my memory as the season of cinematic disappointment.  There were so many movies I was excited about; so few really justified it.  Easy wins like Iron Man 3, The Lone Ranger, Pacific Rim, Elysium and The World's End were bungled badly enough that I felt pretty comfortable throwing them in the dustbin of history (and the less said about Star Trek Into Darkness, the better).  Even basically good movies like The Purge, Man of Steel, The Conjuring, The Wolverine, Kick-Ass 2 and, yes, Fast and Furious 6 were qualified failures to one degree or another, in that they failed to live up to their significant and, in some cases, nearly unlimited potential.

Ultimately Getaway manages to careen ineptly into that former category.  After Pacific Rim, it took the place of my most anticipated film of the year; the result was a marginally watchable and eminently forgettable car film.  It earns this very faint praise, no thanks to director Courtney Solomon, and his editor, Ryan Dufrene, who too often fail to achieve basic film competence despite the resources they had at their disposal.

The possibility for greatness was inherent in the inception of Getaway.  It is, to its supreme credit, a car movie with real cars, real stunts, real crashes, real explosions, and Ethan Hawke. 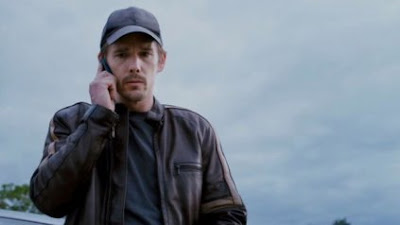 It has a simple premise, even an elegant one in the abstract, if not entirely in the execution: disgraced race car driver Brent Magna's wife is kidnapped, and he is extorted into driving angrily for a shadowy Central European mastermind, who is either Ernst Blofeld, Christian Szell, or, maybe, Jon Voight.

First Magna must steal a Shelby GT500 Super Snake and kidnap its faintly obnoxious prodigy of an owner (in an unfortunately convoluted manner, he does not do both at the same time), then he must drive around Sofia, Bulgaria, causing a pandemonium that furthers his blackmailer's ultimate plan.

H.B. Halicki, Philip D'Antoni, Richard Sarafian, George Miller, Quentin Tarantino, Nicolas Winding Refn, or, hell, maybe even Justin Lin could have made this material sing.  Other than some minor complaints—the Movie Computer Science that is still somewhat less bullshit than many other examples; the fact that European cop cars are now and forever shall be weak; the biological need for the human brain to take a moment to adjust to the egregious imbalance in acting power between Ethan Hawke and Selena Gomez—there is little wrong with this movie that does not involve its editing and its cameras.

The GT500 in Getaway is bedecked with dozens of cameras so that the voice on the other end of Magna's carphone can watch the action.  That is the in-universe reason, but the actual reason for this much coverage is so Solomon and Dufrene can edit together a numbingly high number of shots per minute, perhaps (no joke) exceeding three figures on occasion.  It works exactly as well as you'd expect.  I had some trouble capturing cool images from the trailer, which is normal; my eyes had trouble capturing cool images from the movie, which is not.

Usually the action is still followable, but more than occasionally it is not.  Further, even if the shot itself is fine, too often the less-than-SD webcam video feed is used, and the screen is chocked full of cruddy mpeggery.

This movie sometimes looks as amazing as the classics this movie was inspired by and should have readily joined, but usually it looks like crap.


Further, because no reason, we get "scenes" with Magna's wife, some in her kidnappers' lair—when all we needed was her panicked voice—and some in dreamy, goofy flashbacks.

At this point, the director attempted an arty sort of shot.

These all detract significantly from the tension developed by the movie taking place entirely within the car with Hawke and Gomez, or with the camera three inches from Jon Voight's mouth.

Basically, Solomon had no business releasing this movie with this cut.  It is a disservice to the material, a disservice to the audience, and worst of all a disservice to his own ambitions.  I know Solomon was excited about this movie.  You can tell from his interviews that he wanted to make the best car chase movie he possibly could.  And because this is all real, I'm sure it looked awesome when he was shooting it.  Why does it look so much less awesome when he put it all together?  We really do always hurt the ones we love.

And this movie is cut like Solomon was trying to dispose of the body.

I probably sound like I hated it.  I hate Solomon and Dufrene's crappy vision.  I did like aspects, at least, of their crappy movie.

The reality of the cars and stunts means that every single impact, and there are many, has the irreplaceable weight that the Fast franchise, about the only other game in town, so sorely lacks.  Ethan Hawke is Ethan Hawke: his interactions with Gomez are therefore acceptable, once she accepts that she cannot defeat his acting and must comply with his goals.  Voight is suitably evil and his plan, when revealed, is actually a bit ingenious, in a good b-movie sort of way.

There is, finally, a car chase with a very long take at the end that is visually cognizable and genuinely thrilling, even though its tantric approach to its climax—a single shot from the front-mounted Shelbycam with no dialogue and the only sound that of the rubber on the road and the shifting of gears—feels despicably unearned.

And, anyway, at ninety minutes, Getaway is to the point.

What I do hope for is a recut version on home video that will rescue the greatness that I can see buried within Getaway.  I expect I hope in vain.  Until then and unless, however, here's an okay chase film that's kind of vaguely worth watching, if you really like chase movies and really aren't that particular with them.