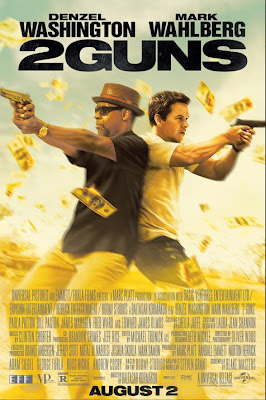 Without condoning or condemning, 2 Guns is certainly in theaters and you can buy tickets and everything.  It's a free country.

2 Guns is a movie for immortals.  If you expect your lifespan to run into millennia, I highly recommend this movie to fill a tiny part of it.  If your days number threescore years and ten, however, while it's not exactly labor and sorrow, isn't there some housework you have to do?

Maybe clean out the trunk.

The movie's a largely generic cops-and-drugs action-thriller, with what I suppose is an adequate number of double-crosses, shootouts, and 'splosions.  You could do worse.  You could do better; so could everyone involved.

There is one reasonably fresh sequence, a brief fistfight that takes place through car windows during a chase.  It ultimately ends with a trust exercise.  It's also almost entirely in the trailer.  Pretty much all of 2 Guns' good scenes are in the trailer; truncated, perhaps, but they're there.

What's the difference between watching 2 Guns and taking a nap?  Taking a nap leaves you refreshed and does not cost $10.50.

There is also one faintly and probably accidentally surprising plot turn.  It's not that what happens is surprising, but how.  When a character is killed off camera but actually did really die, I was genuinely surprised.  "Surprise," however, is a neutral reaction; to elaborate, I was also annoyed.

I'll also admit that I'd never seen Bill Adama piss on himself before, but that does happen here.  Why?  'Cause.

The rest of the movie is content to play out in a very basically competent fashion.  It begins in media robbery, pretty unnecessarily, then flashes back to a week earlier.  Unbeknowst to the other, drug runners Bobby Trench and Michael Stigman are in fact both operatives of the U.S. government, the former a DEA agent and the latter a Navy Intelligence man.  Each are after the cartels moving product and money through Mexico into the American Southwest.  To this end, they rob that bank, a cartel depository, and find fourteen times more money than they planned—some $43.125 million, as we are repeatedly informed in one of 2 Guns' least funny running jokes.  Obviously such a sum means serious business to serious people.  They steal it anyway, and of course the bad guys isolate them from their respective support structures and come to get their own back.

This is the base set up to dozens of better movies.  I'm pretty sure it was a great Breaking Bad episode.  However, rather than intense, shocking, and profoundly moving character drama, or brutal and affecting action, or cerebral life-and-death games of mental chess, or much of anything you'd really want to see, 2 Guns is as restrained a crime movie as you're likely to find.  I think the goal in 2 Guns was "cool" but they achieved "sedated."

To illustrate how underwhelming 2 Guns' effort is: coming out, I honestly thought it was rated PG-13, because I forgot there were three seconds of breasts in it.  I'd feel comfortable bringing a kid to 2 Guns.  It's Baby's First Noir. 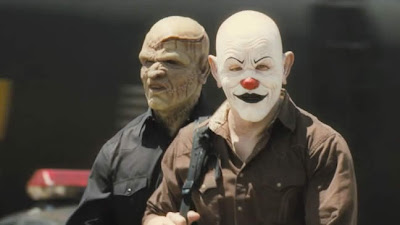 Sure.  Invoke The Killing.  That's appropriate.

Denzel Washington plays the Denzel Washington Character—the fast-talking, quick-witted quasi-bully with a GS grade and a gun.  You'd likely find him obnoxious in real life.  Still, this guy has charmed us on screen many times in the past.  Not so much in 2 Guns.

But if he's bored here, and my God he is, you can't really blame him.  He has been here before—and when "here" was a lot more interesting.  So have we.  It's as if the director kept saying "less energy" at Washington till his will was broken and this one-note, read-through performance resulted.

If this is the case, it's a credit to Mark Wahlberg that he refused to succumb to the psychological torture and does come at his role with some level of engagement.  Fundamentally, he's only playing a very minor and uninteresting variation on his Mark Wahlberg Character, the well-trained, wide-eyed doofus, but at least he feels invested in it.  And the childlike enthusiasm Wahlberg gives Stigman for the prospect of teaming up with Washington's Trench and shooting bad dudes is fairly amusing. 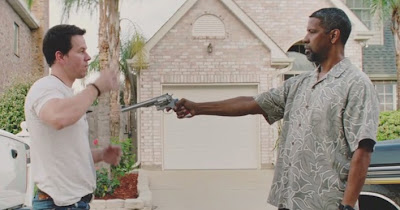 All the more shame then that their banter, which comprises the bulk of the dialogue in the movie (if not the bulk of the running time), comes off as prattle.  The script's like a poor vein of ore: it needed some heavy refining.  There are some good chuckles buried here and there, but probably half is attempted cleverness only, and at least two-thirds is purely petty bitching.  It is never close to compelling.  It's not even watered-down Tarantino, it's watered-down Everybody Loves Raymond with some gunshots or mild torture every twenty minutes.

Actually, the portentous invocation is of "A6 Apache gunships."  But that's what happens when you film a first draft and no one but Mark Wahlberg gives a shit.

I guess I can offer the low praise that at least 2 Guns is not in the aggregate a fantastical piece of total nonsense, although there are parts—key in on how they leave the naval base or the shot that brings down the helicopter—that are in isolation very much total nonsense.  It offers some—key in on "some"—semi-realistic action, in an era that will be remembered for its CGI super-cartoons.  And it plays; even if it has the script and production value and, tits notwithstanding, the content limitations of a TV movie, it does manage to tell a followable story.  It's also reasonably compact at 1 hour 49 minutes.  If there were an Academy Award for the "Most Okay Picture," it would probably win.

But man, if you plan on dying one day, don't bother.

P.S.: I avoided the temptation to do a "Cattlestar Galactica" joke.  When Edward James Olmos has a bull that actually hurts somebody, that's when that gem will get its time to shine.
Posted by Hunter Allen at 11:05 AM