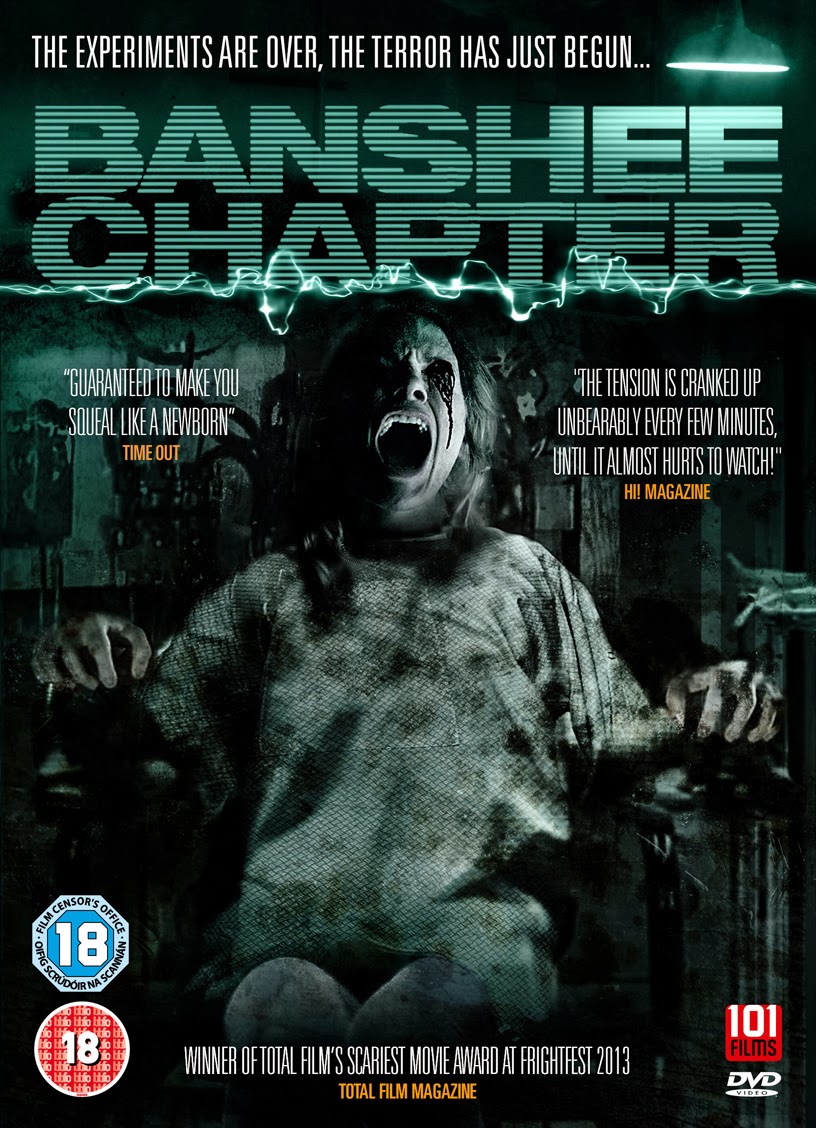 
Like those of most movies, The Banshee Chapter's credits end with a piece of standard boilerplate declaring that any similarity its characters bear to persons living or dead is a coincidence.  This is, of course, one intense fucking lie, and the opposite is closer to the truth: every similarity its characters bear to Johnny Depp is entirely deliberate—the similarities to Hunter S. Thompson himself being only slightly less intentional.

Banshee, if you were not already aware, is a horror film that features a debranded Raoul Duke in a major supporting role. 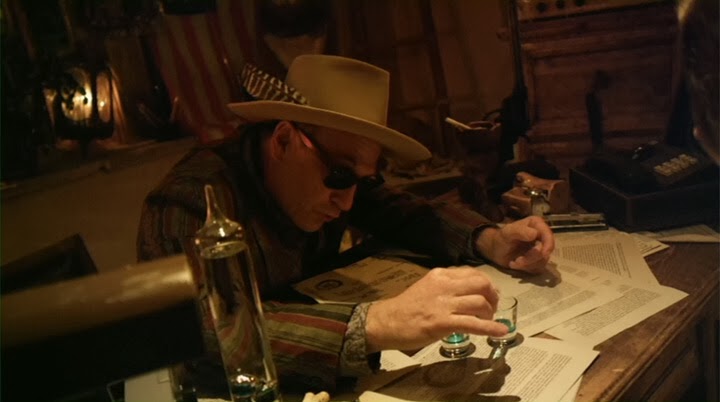 Just in case you didn't believe me.

If I were more inclined to do legal research on behalf of a movie I neither outright loved nor at all hated, it would be of some interest to know if the appropriation of Thompson's likeness or the infringement of Thompson's fictional avatar would arm the Thompson estate with any cause of action against its producers and distributors.  But if they haven't sued Garry Trudeau or Jackson Publick yet, I suppose there's no call for litigation over this no-budget indie horror flick.  So let's focus instead on the more pertinent third question: is it even possibly a good idea to have a naked analogue of Hunter S. Thompson in your horror film?

In the case of Banshee, the answer to that question is actually "yes"; but like all good ideas, it's in the execution, and the execution, like an unfortunate number of Banshee's many good ideas, is too often not executed in a manner calaculated to further its goals as a horror film of serious note.

The reason using some version of HST is a good idea is because the film is about drugs, and the '60s and '70s, and fringe society, and takes place in the American desert, so the presence of some kind of faintly Thompsonesque figure is not just added value, it's practically obligatory.  The reason it's a very bad idea has been outlined already, but we'll get back to it.

The Banshee Chapter's title comes from the name of the chapter of a book being written by James Hirsch, a conspiracy novelist who's been extensively researching MKUltra, the 1953-1973 CIA project infamous for its criminally negligent levels of oversight and a straight-up Mengelesque disregard for human life.  You've probably heard of it, but if you haven't: MKUltra was an umbrella program for all manner of unethical super-science, but it's most well-known for giving unwitting subjects, CIA operatives and civilians alike, doses of exotic drugs in order to see if any of them were mind-control agents or perfect truth serums.  This seemed more reasonable in 1953, because the Cold War, and because the ideas behind The Manchurian Candidate and Telefon were not then considered self-evident nonsense by a distressing number of people in leadership positions in this country.  Of course, MKUltra's results were encouraging only in comparison to its sister program, MKFantastic, a study of the effects of radiation upon the human organism, which was discontinued only after lymphatic cancer had killed four of our finest astronauts. 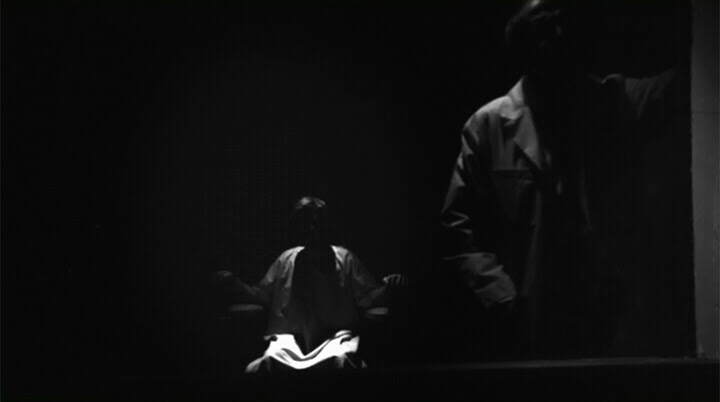 As we see in a found footage segment towards the beginning of Banshee, Hirsch has obtained a dose of one of the drugs used by MKUltra in this movie's rendition of the secret history, namely a modified version of DMT.  Dimethyltryptamine, as you know if you have ever read even one Warren Ellis comic, is an entheogenic hallucinogen, endogenous to the human body in small amounts and inconclusively linked to the pineal gland and near-death experiences.  The agent generates strangely standardized psychedelic experiences, described as going into a transcendent hyperspace, populated by friendly supernatural intelligences that appear to have their own autonomous existence.  It doesn't take a pharmocologically-expanded imagination to easily guess that the "enhanced" DMT in this film follows a different script—and that's why this movie isn't called The Machine Elf Chapter.

But like real DMT and the "elves" often seen by its users, the alternative term "banshee" comes from the distressing fact everyone ever dosed with this drug also described what they saw much the same way.  But it's more than that: we quickly learn, with an impressively OH FUCK jump scare, that we are enterting Altered States territory immediately, and that whatever this drug does with hyperspace, it has a very real impact upon the home dimension too.  This recording is the last anyone has seen of Hirsch, who left no body, although some of its parts, and fewer clues.  Thus does Anne Roland, a journalist and Hirsch's best friend, become obsessed with solving the mystery of his disappearance, and our plot begins in earnest.

The first lead she pursues is Hirsch's radio hobby (and the strange noise, in the footage, that spontaneously began emanating from Hirsch's radio speaker).  She makes contact with another short-wave radio enthusiast, and learns about numbers stations, HF broadcasts of apparently random letters and numbers read aloud by odd, synthetic, and usually female voices.  Numbers stations are real, too; they're no more inexplicable than reconnaissance satellites or polonium-210—they're simple spycraft—but to listen to the weirder ones is a deliriously creepy experience. 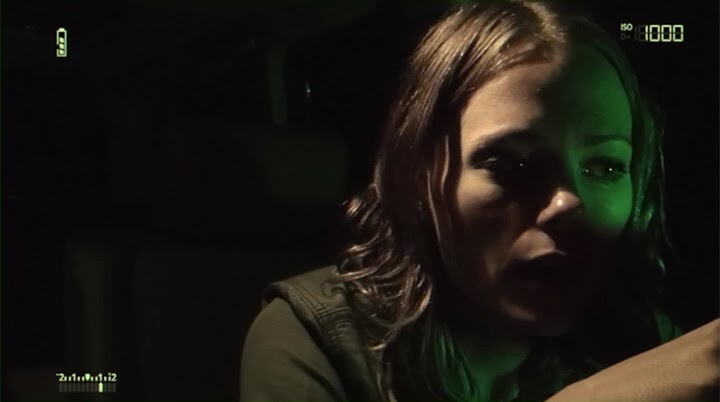 Banshee doesn't accept that demystification, and when Roland tracks one numbers broadcast into the desert using direction-finder equipment, she neither likes nor at all comprehends what she finds.  Recoiling from this terrifying, dangerous line of investigation, she follows her other clue, the "friends in Colorado" whom she believes to be the source of Hirsch's dose of DMT.  So like the Stereo MCs before her, she gets herself connected, and to none other than Thomas Blackburn, famous novelist, drug abuser, and regional yokel.  Together, they plumb the inky depths of what may be a murderous government cover-up stretching back decades, which is bad enough—but threatens to reveal itself as something unimaginably worse.

Let me pause here to say that, whatever faults there are in the realization, Blair Erickson and Daniel Healy did an amazing job in interweaving all these unrelated and underutilized strands of conspiracy culture and counter-culture into an ingenious horror narrative so suffused with mystery and oppressive atmosphere it's almost unbearable.  Special recognition in this latter department is owed to cinematographer Jeremy Obertone, whose handheld DV is far more welcome here than it would be in any other genre; and whose extensive use of great curtains of black and of sickly green lighting straight from the Borg cube are transportingly expressionistic rather than realistic, and better for it.  And, I suppose, we must also be gracious enough to recognize that this could easily have been an actual found footage picture, and wasn't: so thank you, everyone involved.

But there are faults in the realization, and ultimately the largest is Ted Levine's unrestrained homage to Depp's performance from Fear and Loathing.  The damnable thing about it is that it's technically a pretty great impression, one assisted in no small part by admirable if very high-key production design, from the hippie/redneck/resistance-fighter decor of Blackburn's compound to the dust covers of his novels.  And I have to concede, the dialogue supplied by the script in combination with Levine's performance is unremittingly entertaining.  Unfortunately, what an ingenious, mysterious, oppressive horror narrative probably never needs is a literal invader from another movie of an entirely different, and largely comic, tone.

Other, more tactical, faults are evident as well, in the staging of certain sequences.  Notable issues arise in the scene in Blackburn's chemist friend's basement, as well as in the lowering of the threat level in the climactic scene and in the final fate of one character, which recalls The Last Crusade, if not Tangled, of all fucking things.  Problems are evident, too, in the scenes where it is unclear to what extent the archival footage we're seeing is also being watched by Roland, and thus to what extent she is aware of the dangers MKUltra's DMT program has unleashed; and in the somewhat arbitrary intercutting of the archival footage itself, which, while not uninteresting, also serves as padding; and in the predictable and unnecessary semi-twist toward the end (as distinct from the necessary, but poorly, poorly, poorly established full-twist at the end—although in its essence it reminded me a bit of Carpenter, so that was cool).

On one hand, intellectually, I know that Blackburn should have been his own character; Levine has, to put it mildly, shown some facility within the horror genre before.  And if Blackburn did require a purely non-fictional basis, it would have made far more sense to have made him an analogue of Terence McKenna, foremost amongst DMT enthusiasts, and who helped discover its oddly ubiquitous effects; or Ken Kesey, who really did participate as an LSD volunteer in an MKUltra experiment, and who was a major figure in popularizing that drug.

But on the other hand, neither of those authors had a public persona quite so ripe for pilfering, nor so inherently representative of the corrosion of the counter-culture at the beginning of the 1970s, as HST's.  So, ultimately, I'm less angry than I am frankly annoyed with The Banshee Chapter for including something so awfully, unforgivably distracting from its main purpose, but which also granted humanity to a story that would otherwise have been far emptier, and perhaps even sterile.

And that may be as much a condemnation as the movie's earned: whatever the vast strength of its conceptual foundation, Banshee had to import all the personality it lacked from a dead man.

But those concepts are so strong, and so well-presented that it spooks me even now a good 24 hours later, that I suppose I've got to face it: it's a pretty good movie after all.

P.S.: You may notice that the "poster" at the top is in fact a DVD cover, and a U.K. one at that (not to mention generic and awful).  That's because the U.S. poster, while far better designed, is full of spoilers and if you linger over it for more than three Goddamned seconds, you'll see images from several major plot points.  I just want to repeat: the poster has spoilers.  I also heartily recommend not Google image searching "Banshee Chapter," because that'll absolutely spoil anything left.  The Net is lame.
Posted by Hunter Allen at 4:20 PM