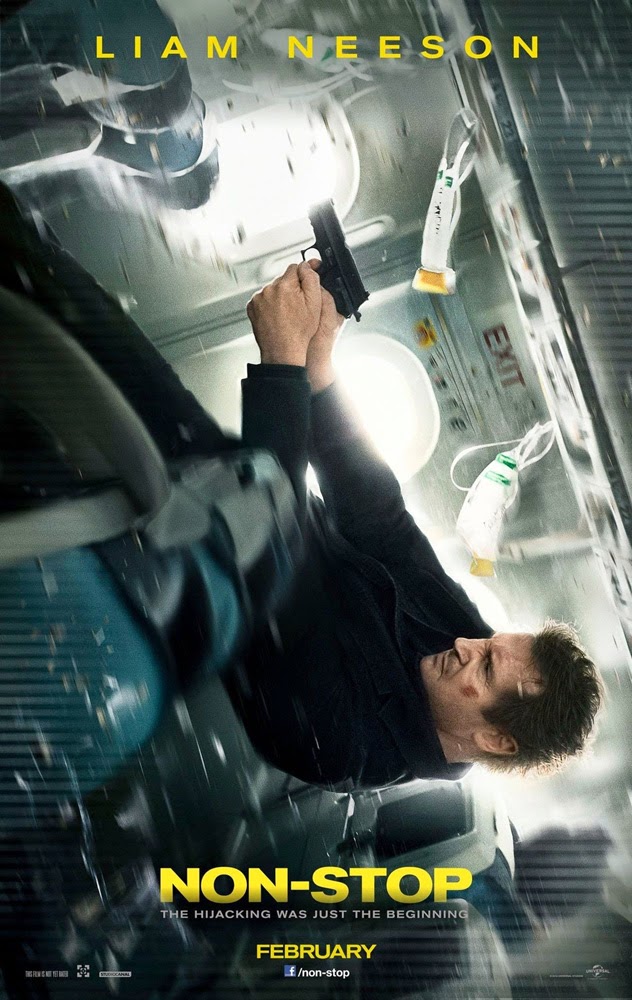 
Appearing in several thousand films a year seems like it must get exhausting, and Liam Neeson's Bill Marks looks and sounds more worn out and hollow than even his wounded alcoholic stock character demands.  Charity may suggest the use of the adjective "laconic" to describe Neeson's performance; objectivity would demand a description more along the lines of "bored."

It's a shame, because the rest of the movie is basically fine.

Non-Stop is an airplane thriller, and it takes a page right from super-director Robert Zemeckis' playbook, beginning with the opening scene from Flight—at least, had Flight been lame, instead of awesome.

Denzel in the lead would probably solve every problem I have with Non-Stop.  It could have even been a sequel to Flight!  Or any number of Goddamned movies, really.

Eschewing casual nudity and a noseful of cocaine—the latter of which could no doubt have helped as well—Marks is instead being generically sad, drinking in his car before embarking upon a transatlantic flight.  This would be morally neutral behavior, except that Marks is a federal air marshal.  On any other day it would still be harmless, but not this day: as soon as Marks' flight levels off, he begins receiving evil text messages from an evil mastermind who threatens, evilly, to begin killing a passenger every twenty minutes, unless their ransom demands met—US$1 million for each and every one of the 150 souls aboard.

"I just realized the ransomer is ransoming himself!  Dirty pool, mister!  Or missus!"

Marks takes the threat seriously enough, but naturally doubts its veracity, until someone does in fact die—in such a manner that fairly tells you everything you need to know about Non-Stop's narrative construction, which is that the mastermind is in fact an omniscient, living god.

It is very much one of those movies, so your tolerance for the contortions the screenwriting team put their initially brilliant premise through will determine whether you basically enjoy Non-Stop, as I did, or find it frustrating and wasteful.  I'm certain a reasonable viewer could be annoyed: there is an instantly-infamous sequence where a smartphone virus is written in eight minutes, and another scene, less remarked upon but equally ludicrous, that indicates someone snuck a power drill aboard this airplane, in order to put machine-precise holes in its interior partitions.  (This is, incidentally, what permits Marks to discover, thanks to a mid-crisis cigarette, a valuable clue!  And yes, it's stupid.)

There might be about one billion potential suspects, but only one would be genuinely surprising, because the last movie that actually revealed any Arab character as a terrorist was United 93.  Unfortunately, there are no obvious neo-Nazis or Russians aboard, making Marks' job that much harder.  The ultimate twist does remain overtly political, however, and I much enjoyed its potential for offending the more weakly constituted.  On the other hand, the characterization is so light, with the red herrings so ubiquitous and their potential for evilosity so impossible to ever rule out, that it simply overwhelms the ability to care about the mystery as anything but a motivating force for Marks' own paranoid acts.

Still, all the messiness inherent to a story that needed one more draft is cloaked in the first instance by the film's adequate pace, and in the second by its substantial production value.  As a result, at a basic level, it works.

If the former—the pace—had been a sight better, I happily admit I could have easily loved Non-Stop, nonsense and all.  More's the pity, for it does drag, here and there, and this is impossible not to notice in the front half especially. The film is a text message extravaganza by design; they do their best to make this cinematic, and largely succeed, using a technique of floating text boxes that is no longer brand new but still needs to be adopted as the industry standard.  Despite these heroic efforts, I still wonder if long text conversations contributed to the feeling of aimlessness that permeates a significant fraction of the movie.  Perhaps, at least, those text threads would have been the place to start the pruning.

The latter, however—Non-Stop's production value—is just about unimpeachable for a film of this tier.  It is not until the back half that it becomes fully apparent, but this is a good thing.  What you never like to see are films blowing their metaphorical loads prematurely, limply falling out of your eyes and ears with a muffled apology and an offer to get Plan B in the morning (Plan B in this case would be watching Die Hard 2).  But this does not happen here!

Although, unlike this moderately intense gentleman, William Sadler was no red herring.

The visuals are a big reason why Non-Stop works; although the palette is more aggressively blue and the lensing too full of depth of field fuckery for my tastes, each choice is still appropriate and (I concede) interesting.  The camera movement is really shockingly adept, leading to the crowning achievement of the film.  Alfonso Cuaron and Emmanuel Lubezki (and maybe Brian De Palma) each deserve dedication credits on Non-Stop, for the film is bifurcated by a six minute, digitally-stitched take that is impressively and tensely constructed, and lets us know the movie is about to get for-serious badass, though, regrettably, Julianne Moore does not get shot in the throat during it.

Indeed: if your expectations for the word "badass" are not "an okay mystery now unfolds with enough incident that you only realize later that it was not inherently interesting" but rather "Liam Neeson begins to punch people in the face non-stop", I'm afraid the bona fide action content of Non-Stop is marginal, with a single quite wonderful exception (yet also a seemingly truncated exception), in the special-effects driven climax.

The remaining action, while perhaps a scant four minutes' worth all told, is nonetheless decent action, intimate and claustrophobic as befitting the close-quarters setting.  (Unfortunately, it is also somewhat badly cut action, so add Paul Greengrass and Unnecessary Shittiness to my fanciful list of dedications.)  Climax notwithstanding, it mostly amounts to Liam Neeson declaring Thumb War upon all comers, except he has misunderstood the rules to that ancient pastime, believing that it's actually a battle for the soul of every man's carotid arteries.  I cannot decide for you whether you will think that is cool; but if pressed, I would suggest that it is, in fact, tolerably cool.

Indeed: "tolerably cool" is the best two word summation of this movie possible.  And with tolerable coolness, it moves, it entertains, and, in the end, it stops.