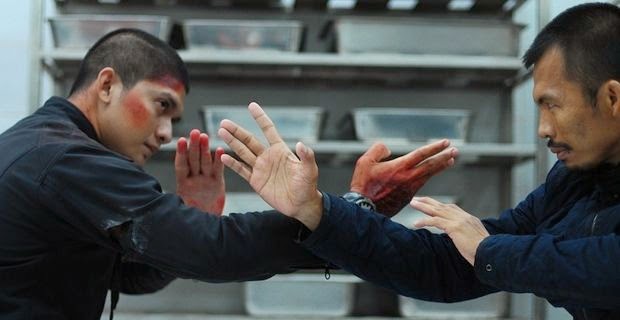 This is, as the name implies, a sequel to The Raid.  It is indeed a sequel in the sense that it features Iko Uwais as Rama the Cop, and it takes place in, more or less, the same Jakarta underworld as the first film.

On the other hand, it is not much of a sequel to The Raid.  To the extent The Raid 2 manages to be concerned at all with the most important events of its predecessor, they are wrapped up quite quickly—and characteristically brutally—within the first five minutes.

On an even more fundamental level, The Raid 2 is also not a sequel to The Raid because it began life as an entirely different project, simply Berandal ("Thugs"), which was what Gareth Evans wanted to make in the first place, and The Raid was only something he put his energies into when no one would give him enough money to do it.

Of course, The Raid is now an accomplished fact, one that for obvious reasons has opened up all sorts of new horizons for Mr. Evans, though apparently not infinite ones.  He got his money but with a catch.  Berandal could be made—as a follow-up to his sleeper masterpiece.  Thus arrives on our shores the Raidified version of his passion project.

So this begs the unavoidable question: how could anyone have gotten so darned passionate about this story in the first place?

Well, the best reason is that The Raid 2, though with far less aplomb and—strictly speaking—narrative necessity than the original, presents another opportunity to marvel at the supermen that are Iko Uwais (who, we now see, appears far more unassuming than you would suspect with his shirt off, prompting one to believe that he really does have that adamantium skeleton) and Yayan Ruhian (here in a rather different role, but—for reasons that defy explanation given this classier outing—with identically ridiculous hair).  Once again, of course, they are but the star players in a cast of hundreds of other martial artists.

This number now includes Julie Estelle as the deaf-mute Hammer Girl alongside her partner in murder, Very Tri Ulisman, as my personal favorite, a live action Lil' Slugger.  They are joined by the one who is clearly Evans' favorite, Cecep Arif Rahman.  He is "The Assassin," whose nomme de guerre doesn't so cleanly suggest his weapon of choice.  He likes hand sickles, a device for which there is a more poetic name—it's called a kerambit, I believe—that I just saved you the trouble of googling.  (But they turn out to be not half as cool—in my humble opinion—as the combination of any given baseball and aluminum bat available at your local sporting goods superstore.)

So far, so radical, the reasonable reader will think.  And they'd be exactly right.  Every moment focusing on the physical interplay between these monsters of martial arts is as viscerally gripping as just about any moment from its predecessor.  But: this realization of Evans' Berandal is very lucky to have its fate linked to that of The Raid, for it is solely our attachment to Rama that produces any emotional investment whatsoever in The Raid 2's sturm und drang.  The real irony is that, unlike with The Raid's stripped-down but ever-compelling narrative, there is very close to as much harmless thunder here as there is storm.

As previously noted, The Raid's undeniable technical and stylistic bona fides have all but fatally occluded its merits as a storytelling vehicle.  But The Raid 2 throws the finer points of The Raid into much sharper relief, and perhaps we can now see its foundational humanity more clearly.

For The Raid 2 disposes of half of its humanity in the very first scene, when without fanfare or any particular appreciation for the power of his own last movie's final shot, Evans has Rama's brother Andi get his head blown off, at the order of one of our too-numerous, non-martial-arts-wielding villains.  Cue title.

The rest of The Raid 2 is in part an exercise in failing to convince the audience how these physical weaklings ever managed in the first place to establish their authority over the supermen (and woman) who stride through Jakarta like incarnate gods of war and death; this is a question that never came up with Merantau's sex slavers/kung fu masters, and could be sidestepped in The Raid, since its big boss, Tama, didn't matter so much.  That question still probably wouldn't matter very much here if there were a hint of inherent interest in this premise, but unfortunately The Raid 2 is also one of the single most stone-cold generic crime family dramas ever conceived by the human mind.

Ucho, the hotheaded son of Bangun, elder statesman of Jakarta's underworld, feels constrained by the ten year truce between the native and the Japanese gangs, and he chafes under what he perceives to be his father's lack of patriotism and, more crucially, lack of faith in his heir.  On the margins, Andi's murderer, Bejo, backed by his cadre of freakish supervillains, is manipulating both sides into a war that will leave him and Ucho at the top of the Jakarta food chain.

It's not obvious even Arifin Putra cares.  His Ucho is venal and vile to be sure, but, worst of all, he's also quite straightforwardly boring.  His counterpart in Bejo registers a twitch above baseline, but his major personality traits are principally costuming decisions: he wears gloves; he walks with a cane. 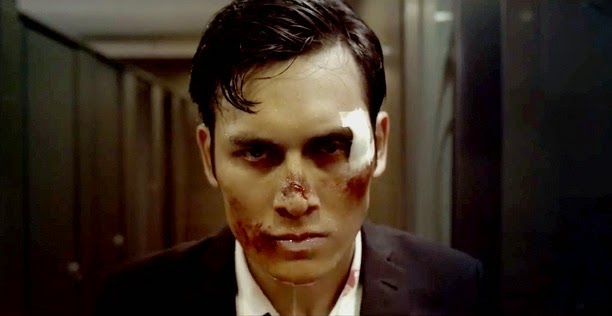 What do differential diagnosis and Vicodin make of this?

It's all a bit numbing, even as Evans demonstrates that he has a good eye for design and for staging his non-action—which is a pleasant surprise (though less of one, if you've seen Merantau).  One hopes that in his next venture he'll return to form as a screenwriter—and as a director of his actors—because for whatever cliched qualities his works have had in the past, they have also had heart to spare (and, perhaps just as importantly, not as much time to spare it in).  If so, and he learns from his mistakes here, the supremely-talented creator of these fine films may yet revolutionize his chosen genre once again; for the present, I doubt there'll be quite the same general uprising for The Raid 2 that its predecessor received.

It's always possible that something—bordering on everything—has been lost in the translation; after all, I do not speak Indonesian.  But one cannot think of a single emotion that would have been lost had martial artists been cast instead of "actual" actors in the roles of our would-be kings, so long as they were literate.  And there would have been very much to have been gained.

Indeed, the martial artists fare far better than their "real" actor counterparts.  In the middle of all of the drama is the single most essential moving part of the story, as well as the real reason The Raid 2 exists; and his center holds.  This is of course Iko Uwais, and while Donny Amalsyah's absence leaves him so vanishingly little to act against, his performance as Rama is always more than merely solid.

In the immediate aftermath of The Raid, he has gone to ground, exiled to prison under another name (in a nod to Merantau, it's Yuda, of course).  His new mission is to infiltrate Bangun's gang and to eliminate them and the corruption they've wrought upon Jakarta's rotten police force from the inside.  To the minimal extent that there is emotional interest in the happenstance of The Raid 2, it is due to its leading man's travails: from the two years he spends confined, to the quiet moment where he calls his wife after an even longer silence, and he hears his toddler's voice for the first time.

One should not expect The Departed or even New World, but Evans has built his movie, if not his career, upon his chosen actor's strengths, and he has not fallen into the trap of accidentally exposing his weaknesses.  The excellent score by Joseph Trapanese and company is a ready crutch for Uwais to lean on whenever he needs to.  And to a great extent, Uwais' silat stoicism succeeds in underplaying many of his more dramatic moments to their best possible effect.  There's a real irony that Uwais' nearly-expressionless face renders the best performance in the film—even before you take into account his fists, feet, elbows, and knees. 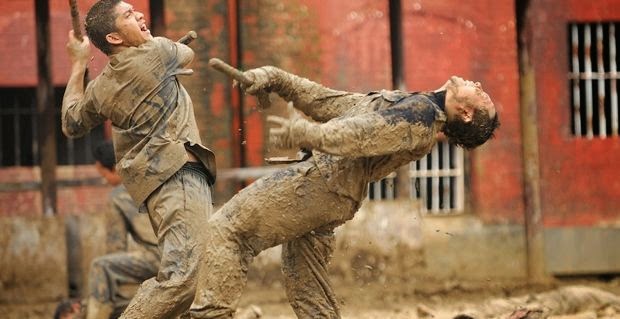 And those?  They make my reptile brain feel good.

And of course, the striking surfaces of the human body are better than well represented in The Raid 2.  This review would be far different if they weren't; it would've begun with vitriol and ended in depression, if I hadn't walked out of the damned thing first.  No, despite a story so schematic that three quarters of an hour could probably be cut without doing the least bit of damage and perhaps rendering some substantial good, The Raid 2 is still its father's son.

Opening up the action to wider arenas than hallways and small apartments—including one of our best car chases—is good for the series; shooting and designing it in more than a single steel color palette likewise.  Yet tragically (perhaps taking some critics' terrible advice ) Evans succeeds in "pacing" his dosage of adrenaline in The Raid 2, by diluting it with endless meditations on loyalty and other such dull concerns—most egregiously in the first, slow(er) half.

But there eventually comes a point where Evans cannot restrain his better nature any longer, and the last half of the sequel comes ever so close to the sustained heart-stopping spectacle of the first.  There is no percentage in rotely describing the bravura action sequences; I cannot even quite choose a favorite, though the battle between Rama and the Bat and the Hammer is surely in fierce contention with the duel between equals to come afterward.  None quite matches Rama and Andi's survival struggle against Mad Dog—but pray tell what could do?  To even approach that achievement, you have already surpassed greatness.

No: Evans has not lost his touch with the camera nor in the editing room, and the fights, even at their shakiest and most frenetic, retain the Raid quality of transcending chaos.  Never is any spatial relationship in doubt, never does the sense of balance recoil.  Indeed, there's ample evidence that Evans has gotten even better at marrying handheld to elegance.  Those few and minor foibles with shakycam, early in The Raid, are not to be found here at all.

His editing is even more of a melody than before, and the ease with which the score synchronizes to the action is clearly the work of a professional mesmerist.  Especially lovely, if jarring because of what it unavoidably recalls, is the inclusion of a fight scene set to Handel's sarabande.  Evidently Evans felt he could go right from The Killing to Barry Lyndon; and in some regards we might have to admit he succeeded.

And so, for the second time in two years, Gareth Evans, the new master of action cinema, has made the impossible possible.  Its flaws may be severe; but so are its enormous strengths.

Now if I could just make heads or tails out of that deeply weird ending...