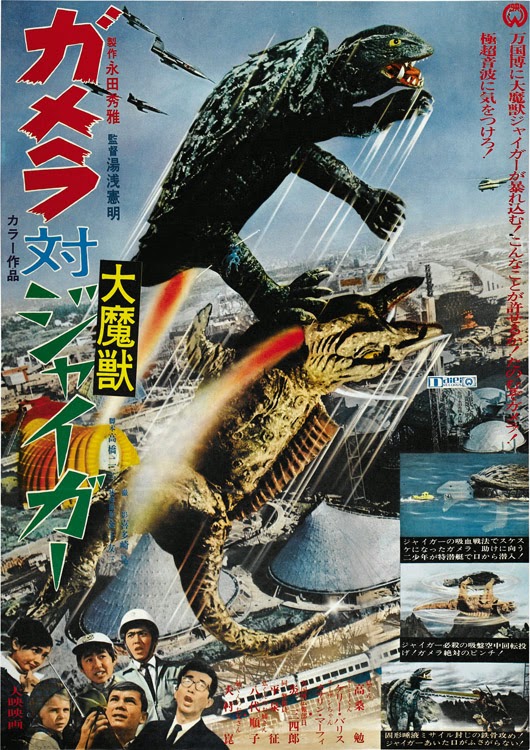 You may have noticed that I seem to have discontinued my Gamera retrospective.  Such is not the case!  My parents taught me to never quit anything I start.  And that is why I have a law degree and a deep and meaningful understanding of the sunk costs fallacy.

No, I merely quailed at the prospect of writing about the latter half of the Showa Era, which are all the exact same movie as Gamera vs. Viras, except much, much worse.  Gamera vs. Guiron had its strengths, as we discussed more than a moon ago, but we have, with Jiger, officially reached the point where the tires have fallen off and we're drunkenly driving home on the rims.

Yet on paper, Gamera vs. Jiger looks primed to be a classic of the genre.  It's certainly just as full of sheer insanity as any Gamera film, short of the unapproachably mad Viras.  For Christ's sake, it's a movie where the preteen protagonists drive a submarine into Gamera's very body to do battle with the parasitic juvenile version of the giant monster Gamera's been fighting, upon a battlefield comprised of Gamera's surprisingly stagey-looking lungs.  How can it not be great?

And now a young Ridley Scott has an idea.

Well, Jiger is an object lesson in the paramount importance of kaiju design to kaiju filmmaking.  The damned shame of it is that it is a purely negative lesson, a brutally instructive what-not-to-do promulgated purely for educational purposes.

Boring and flabby, Jiger is not just the most unappealing creature in Gamera's entire bestiary.  Short of Minya—the alleged son of Godzilla, Toho's terrifying proto-Barney—and Guilala—the star of Shochiku's suicidally-bad foray into the genre, the titular X From Outer Space (do stay tuned)—Jiger is perhaps the single most awfully-constructed Japanese monster ever beheld by these eyes.

Describing what she can do would only serve to set you up for a disappointment, in the unfortunate event you actually watch Gamera vs. Jiger, but it does seem necessary.  She is quadrupedal, and is possessed of both a death ray capable of obliterating ten city blocks (this does happen) as well as flying bone javelins that could crucify any meddling turtle (unfortunately, this does not quite happen, though he does receive a nice stigmata).  She can also propel herself at great speeds with rocket-powered farts—or something like that, anyway.  And, of course, she can lay eggs in your hero monster's chest with her scorpion-like tail.

Yes, she sounds very cool; and then you see her.

The most severe if not the sole problem, as you have clearly processed in that occipital lobe of yours, is her head assembly.  There has rarely been a monster more obviously made of spraypainted plastic in film history.  Figurine work has been a perennial feature of the Showa series, but you could be forgiven for being unable to tell when Jiger is played by a toy and when she is played by a suitmation actor, except it's not because the figurine looks like the suit, it's because the suit looks like a figurine.

And what is this crap?  Yuasa's own rule, which he has explicitly discussed and which was surely known to him by his fifth-and-a-half Gamera picture, was to never show the hind legs of any kaiju when down on all-fours unless absolutely necessary, and then never, ever for any longer than necessary.  Why?  SEE ABOVE.

Jiger's obligate quadrupedalism, which worked for Barugon and was rather perfect for Guiron, is an enormous detriment for Jiger.  If I were forced to speculate, I'd say that—again—it's the head assembly, which is gigantic, and seems to weigh the actor down significantly with a literal, spine-cracking pain in the neck.  As a result, she is visibly quite ungainly—except when she's blasting across the Pacific like a flatulence-powered hovercraft, scenes of which at least demonstrate an enthusiasm in their stupidity.

See, the other problem with Jiger is that, despite its incident, it's drab.  Whether that determination on my part had anything to do with essentially watching Viras replayed to diminishing returns for the third time in a month—actually the fourth, since I watched Viras twice—is a difficult question to answer.  I will simply say that I found it boring the first time I watched it a couple of years ago, too, when my only recent exposure to Gamera's Showa Era had been running the MST3K classics (amongst which Jiger does not number) as background noise.

Hubristic white people are raping the land, as we do, down on Wester Island in the South Pacific.  You'd think it would be enough for us to simply study the ruins of the ancient Muan society (and perhaps the absolute highlight of Jiger is the slideshow-based lesson that treats the fictional sunken Pacific continent as well-known historical fact and unworthy of surprise or comment).

Instead, we are in the process of looting their priceless megaliths, even though there appear to still be people on the island.  Professor Williams, father of this film's Non-Japanese Kenny, Christopher, has set his sights on removing Wester Island's most prominent man-made feature, the Devil's Whistle, from its resting place.  Like some kind of Carl Denham, he intends upon shipping it to the 1970 World Expo in Osaka, where rich people of all races, as long as they're from developed countries, can gape at the insane amounts of money spent on ephemeral architecture and cool gee-gaws while poor people starve.

It guess it really doesn't belong in a museum.

Meanwhile, our Japanese Kenny, Hiroshi, is being toured around the Expo by his near-jailbait sister's handsome, chickenhawking, yet Yuasa-approved asexual suitor, to the ambivalence of their dad, a returning Kon Omura who isn't trying to be amusing in any fashion cognizable to Western eyes, unless a discomfiting mustache is, in itself, funny.

A Polynesian islander, played by a black man, has come to Japan to inveigh against Prof. Williams' plan.  He screeches in what the English subtitler, not fooled by Jiger's race-blind casting but also clearly not paying very much attention to the movie, describes as "[African language]."  His rant ends with a breathless, panicked refrain of "Jiger!", over and over again.

No, Christopher.  That is their word.

For what it's worth, it's probably the best scene in the movie, creating a sense of foreboding and suspense, which is the goal aspired to by all such scenes where a wise tribal leader knows a secret but has a tone problem, and is thus not listened to by serious people in suits who turn out, in retrospect, to have been extremely stupid.

You'd think, though, that when Gamera himself intercedes to stop the removal of the Devil's Whistle—and Takahashi alone knows how Gamera became apprised of the full situation—it would at least put a pause to Williams' archeological depredations.  Instead, he orders his coolies to fire their small-arms at the helpful, heroic, intelligent monster that has saved civilization as often as he's trashed it.  After all, he's clearly only trying to halt the work and not kill anybody.

Actually, if Gamera just breathed fire on them, this movie would be over and countless lives would have been saved.  Certainly, how Williams' rifles manage to repel Gamera is both unexplained and inexplicable, except that Jiger must be awakened in order for the rest of the plot to happen.

Which is, of course, the result of taking away the Devil's Whistle.  Our undifferentiated scientists for this film eventually realize, about an hour after the audience has, that the Whistle is an ancient sonic weapon.  Using the destructive harmonic it generates whenever the wind blows through it, its frequency keeps Jiger docile.  Now aware of Jiger's vulnerability, and ripping off Invasion of Astro-Monster for like the twentieth time in this series, annoying noises are eventually deployed against her and, in conjunction with an electrically-resurrected Gamera, she is killed.

Are you ready to ROCK?

There is a slow hour's worth of complication before we get to the third of three awkwardly-staged kaiju battles, however; and despite a couple of gory meet-cutes between the two monsters, it is only really interesting and/or entertaining for the five to ten minutes after Jiger puts her baby in Gamera's tummy—the longish take of Gamera walking away in pain before falling down to die is the only really good work from either Yuasa or from Gamera's suitmation actor, Umenosuke Izumi, in the whole film.  This is right before the sequence where Hiroshi and Christopher manage to infiltrate Gamera's respiratory tract, which soon degenerates into inept combat with a terribly-realized infant Jiger, which looks exactly like the adult except even lamer, if that's possible.

I know that I made fun of Akio and Tom's weird bullshit in Guiron and Masao and Jim's incorrigible wankery in Viras, but these were character traits, and their adventures seemed fresh and original (considering the source, anyway).  By contrast, Hiroshi and Christopher steal yet another one of those yellow submarines that must have just littered the Japanese landscape in those days, and have amazingly boring conversations about where to place Gamera on their D&D alignment charts.

I'll close on a general note.  Jiger is the second Gamera South Seas adventure, and the second bad one. Consider Gamera vs. Jiger and Gamera vs. Barugon alongside Ebirah, Horror of the Deep (aka Godzilla vs. the Sea Monster)—definitively one of Godzilla's lesser Showa Era outings—and King Kong vs. Godzilla—which is by my lights amongst the very worst, despite a bafflingly decent reputation.

The unavoidable conclusion is that mixing jungle island romps with giant monsters seems to spell disaster as often as it results in anything at all particularly worth watching.  King Kong '33 had a premise that could really only seem completely new once: on a remote island with a weird aboriginal culture, there's a thing!  And Mothra may be the only other kaiju who's successfully ripped off that origin.

But perhaps crappiness is only the symptom, because the disease is laziness.  That's certainly my diagnosis here.  Yet it's of academic interest only; this patient's fucking dead.