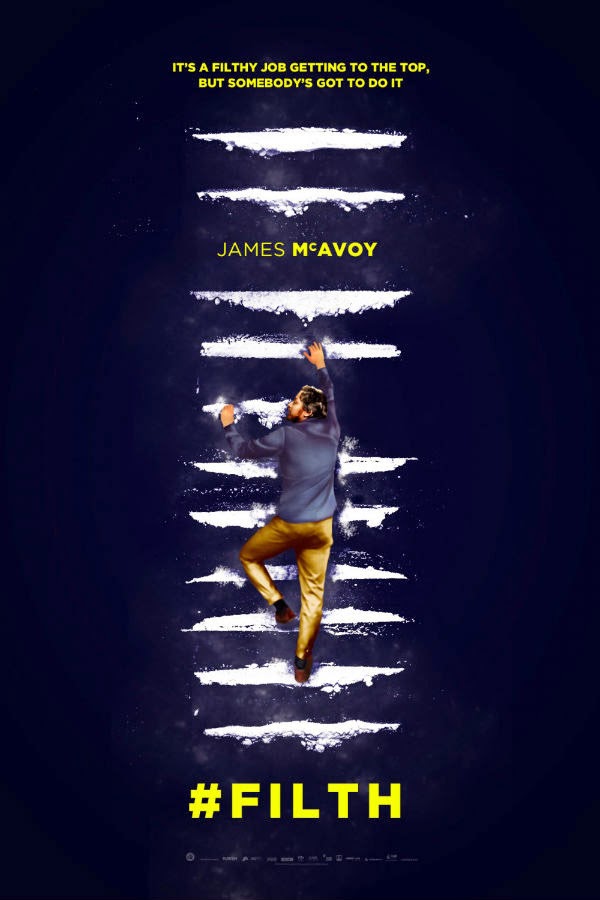 Filth, regrettably, does not feature Ned Slade, top agent of the Hand and lover of cats, because that would make this movie The Filth, a film adaptation of Grant Morrison's metafictional masterpiece, something that doesn't exist, and isn't damned likely ever to exist.  But it's still not terribly dissimilar in tone.

Jon S. Baird has instead tasked himself with adapting another Scottish author of note—one Irvine Welsh, the novelist who gave us, amongst other things, Trainspotting.

Thus, almost by default, Baird's approach to directing the film version of Welsh's Filth is to copy Danny Boyle in every respect he possibly can, employing quick cutting techniques, delivering ghastly phantasmogoric imagery, and, not least, casting James McAvoy as a frenetic mockery of a human being.  This is not, of course, any kind of substantive criticism.

The substantive criticism is that, while Baird is not doing a bad job replicating the Boyle of 1996, the Boyle of today has grown up so much that Filth looks a bit quaint in comparison.  Plus, Trainspotting had a cinematographer who knew how to light a scene, whereas Filth can be far too content with hideous lighting schemes that sometimes suggest that the Brits have finally taken my advice on how to deal with secessionist rhetoric, and matched treason with Trident.

The warheads were getting dusty.

And then there's James McAvoy, who could make the ugliest movie still potentially worth looking at... though given his acting choices these past few years, there's every indication that his involvement would only make it that much uglier.  In a good way.

In my Days of Future Past review I referred to Michael Fassbender as one our super-actors; the entirely-intended implication being that McAvoy isn't.  McAvoy still has Atonement to live down, and, like involvement in any atrocity, that's going to take a while.  But when you get down to it, besides that bravura, utterly wasted six-minute long-take, he was the only other good thing in that whole awful movie.

Meanwhile, he's been Professor X, which can only help his case (and I blame Matthew Vaughn on the silly gesticulations McAvoy uses to indicate telepathy, since they were toned down markedly with Bryan Singer's return to the franchise).  And last year, there was Trance, one of my sixteen favorite movies of 2013.

Now comes Filth; and he's about one more great performance away from a line in an X-Men: Apocalypse review that begins "starring pretty much the best actors currently working," without a hint of differentiation between the two.

And you know what?  In Shame, Fassbender was one-note.

In Filth, McAvoy is not one-note.  He is many notes, often all at once.  Filth is a lot like Shame, except with 100% fewer incestual themes and a protagonist that may have even less of a handle on his sexuality.  It's also a lot less joylessly exploitative and boring.  But both are about a descent into depravity; the very big difference is that a couple of years later I'll probably remember how Detective Sergeant Bruce's descent ended.

In the opening narration(s) of Filth, we have sketched out for us a potentially plot-driving device.  A spot has opened up for detective inspector, and Bruce, along with the rest of his police squad, are all in the running for the promotion.  Bruce, whom we learn is the wiliest of the contenders (or in any event the nastiest), relates his expectations of getting the job—and his plans to destroy everyone else that could stop him.  He doesn't seek power for its own sake, though; his goal is to wetten the panties of his wife, a cool blonde shot in steely near-monochromes and who seems to live solely within the checker-floored confines of the Sex Dimension.

Bruce's drive for status doesn't actually drive the plot, however, since there isn't really that much of one.  This is especially the case in the film's first sixty minutes—I can't even say acts, because that might imply that the opening hour is not bracingly episodic.  Pace is, ultimately, the film's biggest resulting problem.  Rather than a plot, there are subplots, each revolving around Bruce's diabolical machinations, and the only reason Filth can't be considered sketch comedy is that the same character appears in almost all the scenes.

It can, however, simply be considered comedy, but even moreso than Trainspotting, it's of the blackest kind there is.

Bad Lieutenant worked you up to the part where Harvey Keitel masturbates furiously in front of underage girls; Filth gets its version of this scenario out of the way in the first ten minutes, and buttons it with something approaching a gross punchline.  This is Baird making the brave but ultimately successful gamble that McAvoy is charismatic enough that we'll still want to see him do such horrible things, as long as he continues to do them with such aplomb.  McAvoy's claim to true excellence, though, is staked on a seemingly impossible proposition: as Bruce goes from fucked up beyond repair to fucked up beyond ordinary human comprehension, we might actually start to care about him.

With McAvoy rising to the occasion, Filth doesn't need rules, and that's good, because it doesn't have them.  That it winds up being at all watchable must be credited to McAvoy's uncaged performance; but for the prospect that it ultimately winds up so fascinating we have to reluctantly, but not unenthusiastically, thank Baird and his unhinged adaptation of the material.

In almost every movie ever made, there is a sense that, while we might not know what will happen, we at least have a good sense of what is happening.  You can never count on that in Filth.  It's a film that takes the anarchic sensibility of an Airplane! or Naked Gun and turns that sensibility toward the ends of the darkest possible noir, marrying it with profound psychological horror.  What really drives the narrative isn't the plan to get a promotion, but Bruce's collapsing psyche, and it's fully represented on the screen.  Probably more than you'd like.

It's so thematically bonkers and narratively and visually divorced from the mainstream that the closest thing I've ever seen to anything like it, that still actually functioned as an entertaining movie, is—believe it or not—Godzilla vs. The Smog Monster.

At least, in each movie you will find humans taking on the heads of animals, bizarre musical numbers, and, yes, out of nowhere, even a fucking cartoon.  If there is not a scene where James McAvoy breathes fire and flies with his newfound rocket propulsion, Filth's penultimate twist is certainly just as unsupportable and unfathomably preposterous as Godzilla defying sense, reason, and continuity to take to the skies for the first and last time in his history.

This twist is in keeping with the anything-and-I-mean-anything-goes insanity of the work as a whole—it's even a satisfying escalation of it—and at the same time it is so impossible to take seriously that only your television literally catching fire during the reveal could possibly stand a chance of pulling you out of the moment any more than the film already does on its own.

And I think that's half the point.  It's all too mad to believe, but Filth is practically a metanarrative about madness—I don't know if any of this movie "really" happened.  Usually, that would be unconscionably irritating.  Here, it's all part of the experience.  In Filth, McAvoy gets to be a monster from the id, and in the end it doesn't really matter if his thoughts are any more real on the outside than Dr. Morbius' were, before alien machines turned them into special effects.  What's important is the filthy joy we can take in glimpsing how terrifyingly real they can be within.