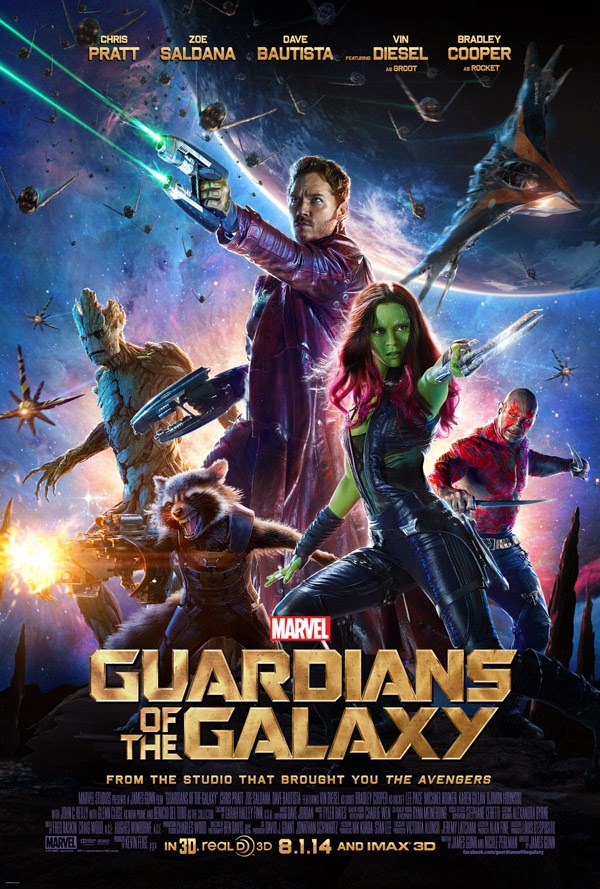 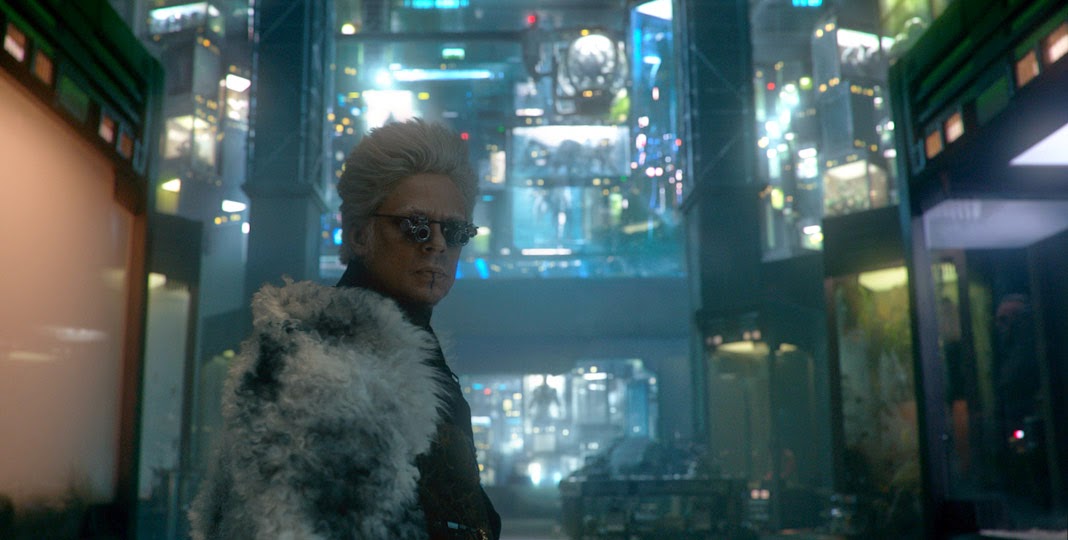 Guardians of the Galaxy was the one entry into the Marvel Cinematic Universe that I was looking forward to the least, but my reasons are, I'm sure you'll agree, bad ones.  Basically, it boils down to the problem that seems to accrue to far too many superhero projects: terribly mistaken conception.

The villain-behind-the-villain featured in Guardians is Thanos, and the plot involves the Infinity Gems Stones.  Thus is Guardians made the most important brick in the foundation of the inevitable film version of The Infinity Gauntlet, but—in Kevin Feige's far-less-than-infinite wisdom—there shall be no Adam Warlock in this adaptation of the single most famous Adam Warlock tale of them all.

And that's how I know this must be a bad reason—you don't even know who Adam Warlock is, so how could you possibly give a single, solitary shit about his absence?  But, God, how it poisoned me against this movie.  It's no more than two weeks ago that I once again pored over Jim Starlin's defining run on the character, and I assure you that whatever Guardians offers, it cannot compete with the time-warping, mind-bending conclusion to Warlock and Thanos' first great war, written long before The Infinity Gauntlet was even a marketing idea in Tom DeFalco's mind.  (And The Infinity War is even better than either, though on this reasonable nerds may differ.)

The miracle of Guardians is that for nearly every second of its running time, I did not think about Adam Warlock at all.

That running time, incidentally, includes a post-credits scene.  This is de rigeur by now, but it is at once the most essential and inessential that Marvel has ever offered; I will simply state that it presumably promises no future plot developments, yet demands to be witnessed with your own eyes, unspoiled, for it is truly glorious and cannot be expected.  This comes from one who was not especially surprised that a substantial fraction of the film is set upon the planetoid-sized head of a dead Celestial.

As you've no doubt intuited, Guardians is a movie for dorks by dorks.  It is easily the dorkiest property Marvel has yet unleashed, perhaps the dorkiest project ever undertaken, on a dollar-per-dorkiness measure.  Its success or failure will, I think, serve as a very interesting barometer for our society.  Essentially, what we have here is not a superhero film at all, but the zaniest of planetary romances.

Peter Quill, who "goes by" the totally cool name of "Starlord," in the sense that he's constantly trying to cajole people into actually calling him that, is a human in space.  He was abducted from Earth by space pirates back in 1988, while he was still a boy.  His only contact with the culture of his birth are the mixtapes his dying mom left him, selected hits from the Before Times that she had a particular fondness for and which now, in his adulthood, form the soundtrack to his weird space-faring life.  If Guardians never quite banishes the impression that it's James Gunn making a wacky stylistic choice, it is nonetheless a wacky stylistic choice that, overall, works.

Starlord's an outlaw, of course, the Han Solo of a movie that already has at least one more Han Solo to get to, and in due course we meet the rest of our gang of misfits.  There's Gamora, an assassin rebelling against her former master, Thanos, mad Titan, and his miniboss, Ronan the Accuser, Kree fanatic.  There is Rocket, a foulmouthed cybernetically-enhanced procyonoid bounty hunter, out to collect the bounty on Quill's head.  There is his partner in human trafficking, Groot, an awesome semi-sapient tree whose dialogue consists entirely of variations on "I am Groot."  And there is Drax, a convict on a vengeance trip against Ronan.

Drax' adaptation from his four-color source is the cleverest of all.  On the page, he was a physical colossus, but one rendered mentally handicapped due to a convoluted backstory that I would just love to share; whereas on screen—in a nod to the former's storied lack of cognition—he is made a member of a species of eloquent but inordinately literal doofuses, incapable of understanding metaphorical language.  Drax is thus made the source of the film's very best jokes—or, at least, the ones that do not involve the words "I am Groot." 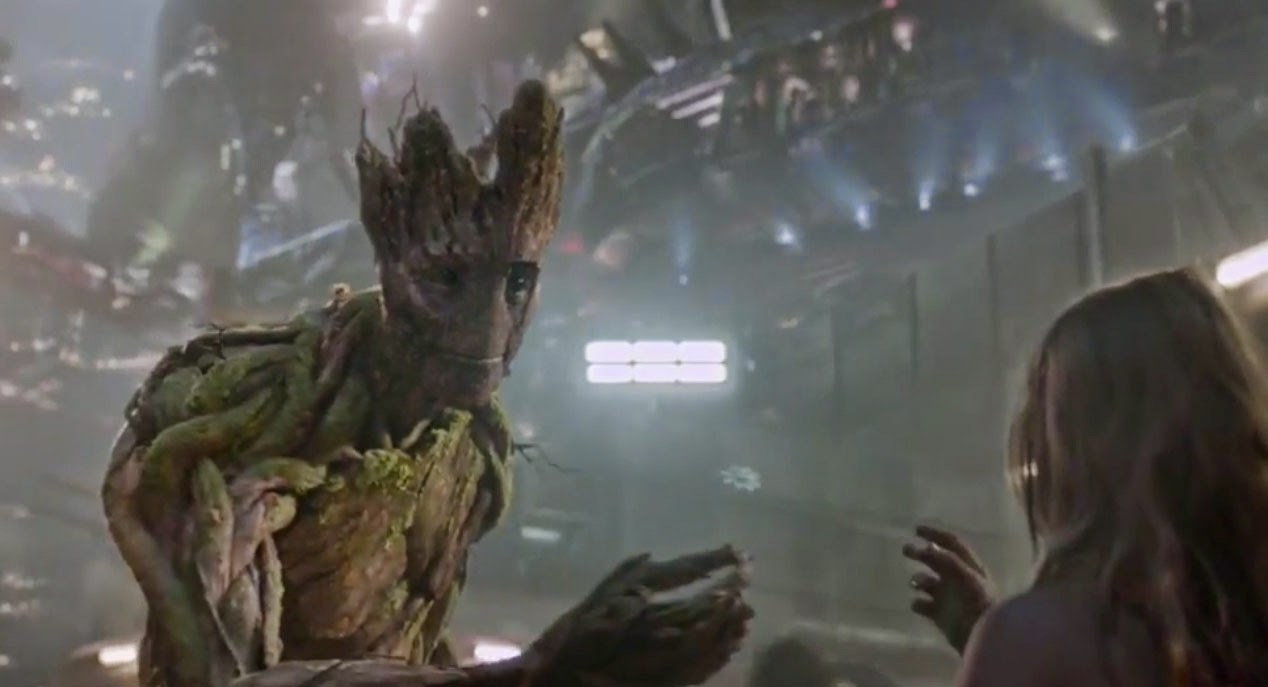 Pictured: Vin Diesel in, perhaps, his career-best performance—and I'm not being ironic or derogatory.

By the way, did you like the part where I just assumed you knew what a "Kree" was?  Well, I hope you did, because the movie does—and God bless it.  I told you it was made for dorks.

These five wouldn't-be heroes are thrown together by circumstance, and must come together as a family in order to save the universe from the evil machinations of... well, it's always in the execution, ain't it?

Execution is not a sure thing going into Guardians.  Witness its beginnings, and you may wish you had not, unless you're a terribly big fan of hilariously fake movie cancer, grotesquely bad child performances, CGI animal cruelty, and prison rape jokes in what I guess is some kind of family film, and all in the first twenty minutes.  It's a space prison, though, which makes it still about as funny as Irreversible.

Honestly, the funniest part of this is when you realize that whether the movie meant to or not, it has told you plainly that Peter's alien dad's Space Penis gave Peter's mom her Space Cancer.   (It's even funnier to me if you still think Starlord's heritage is a "spoiler," once Starmom drops the "angel made of light" line about two minutes in.  Hey: don't be such a Drax.)

And then things even out.  You realize that for a movie to have a tone problem it needs to have a tone in the first place, and that the best thing possible is to sit back, relax, and enjoy.  Guardians is completely unafraid to look foolish, and that is its undeniable charm, even a source of great strength.  I doubt any film will ever again come close to equaling the cognitively-impossible camp super-genius of Flash Gordon—where it somehow knows you know that it's preposterous and silly, but it does not, itself, know that it is preposterous and silly—but Guardians operates in much the same style of half-comic space opera.  Only, in Guardians, everyone outside of the film, both creators and audience, as well as most of the characters within it, already clearly realize that it's a joke.  (The one who most clearly doesn't is Groot, and as a result he is both the most entertaining and the most emotionally investing of all the characters, despite just having that one line.)

And though obviously they don't reach the rarefied heights of Danilo Donati, Guardians is also the first Marvel movie in at least three full installments to finally return to the same universe that Bo Welch and Alexendra Byrne live and work in.  Bravo to Charles Wood and... well, Alexandra Byrne.  Anyway, Guardians features extraordinarily good costume design, particularly on Ronan and Nebula, and also perhaps the best new spaceship design on film in... well, an embarrassingly long time.

Guardians' go-for-the-laugh attitude serves it extremely well throughout most of its two hours, but comedy can go too far, even in a comedy.  No less bonkers a production than Evil Dead 2 still knew when to throttle back on the larfs—even Red vs. Blue's Recollection Trilogy knew when to get serious—but Guardians doesn't, and its climax is at once quite funny, quite appropriate, and groaningly awful.  Ultimately, it banks on its comedy as denouement, and the result is the dramatic equivalent of drawing a stupid mustache on what I thought, up till then, had been a rather compelling sketch of a villain.

But I can't demerit it too strongly when it also features so much that I truly loved.  95% of the jokes do land.  Groot's sequences have a tendency to get outright Spielbergian in their wonderment, and one moment in particular, because it is merely a moment disconnected from the narrative, and nothing like the despicable foreshadowing I feared it might have been, is likely the single most heartwarming bit I've seen in a movie all year.  And, much like my beloved Europa Report, Guardians also features a vacuum-of-space scene where no one's fucking head explodes—and if they go overboard on the CGI ice and the magically-disappearing ocular trauma, it's still better than the alternative posed by Outland or Total Recall. 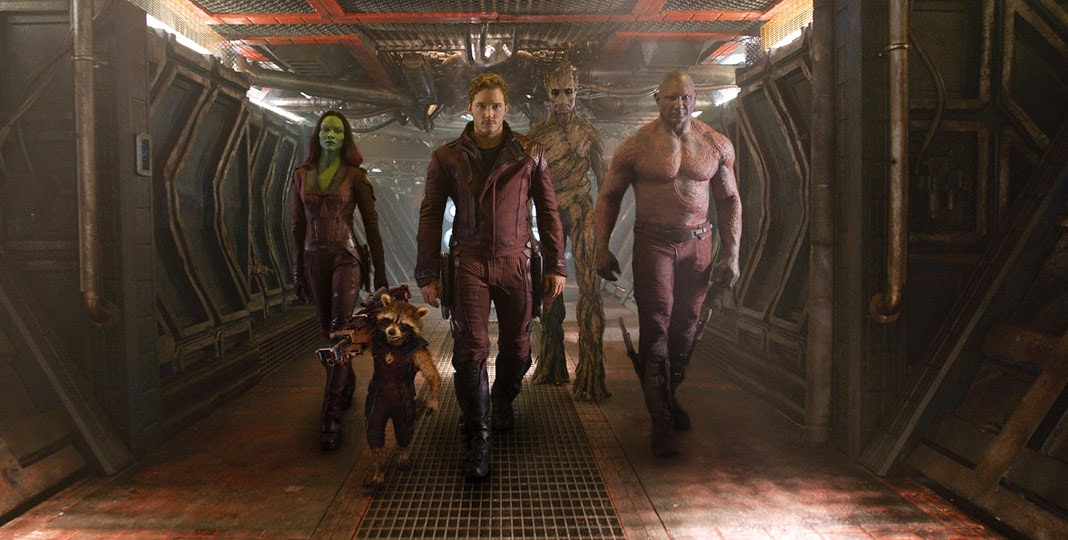 Not that they weren't cool as all hell, but I demand extreme scientific accuracy in a movie about a guy named "Starlord."

It's those elements that elevate a rather goofy comedy (with some real staging problems in its space battles) to something legitimately kind of great all the same.  Disney has been, all in all, good to us these past few years, for they gave us John Carter and Thor, our last two great theatrical space operas, as well.  At the same time, I won't deny that the comedy that does work in Guardians also elevates its space operatics in its turn.

Of course, there is also something of the very deliberately derivative to Guardians, though, and even if I was able to forget about Adam Warlock for all of two hours, there was no way I was ever going to stop being aware of the enormous debt James Gunn owes Joss Whedon.  Look carefully at Chris Pratt, too, and ask yourself if he is not consciously synthesizing Nathan Fillion and Alan Tudyk into some kind of well-built, metajoke-cracking geek omnibus.  Should we fear what he will become?  Time will tell.

But why shouldn't Gunn take Whedon's lead?  Firefly was rad, and this is rad too.  If Gunn seems only to have learned the quip and the self-reference, and failed to emulate the genuinely mythic story Whedon told, and told expertly, in his cinematic run at space opera, this is only why Guardians is not a perfect film like Serenity.  (I am willing to concede, before you get upset, that Serenity is only a perfect film to those who had seen all of Firefly already.)

No, perfect it is not, even wanted it was not, but Guardians of the Galaxy won my broken little heart anyway.  It is the best of Marvel's Phase 2 so far, and my enthusiasm is beginning to return to this mismanaged universe like life's blood itself.