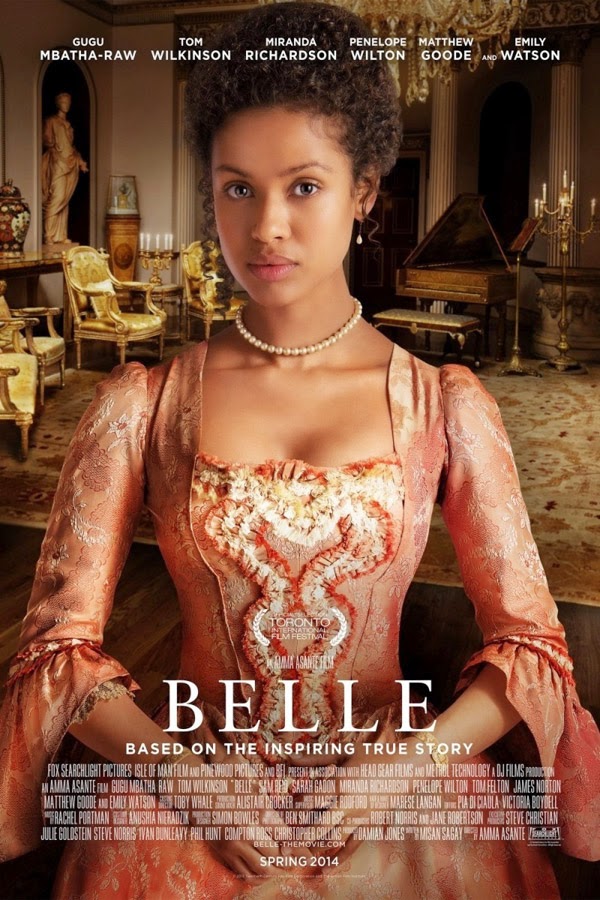 Why, yes—it turns out racism, sexism, and slavery are bad.  A+ one million for Belle.

Spoiler alert: severe, though it is also sort of N/A

I've mentioned before that Things to Come is one of my favorite films.  This is so, despite the fact that every single line of dialogue uttered by every single character is a statement of their political views, a marker of whether they believed what H.G. Wells believed, or if they were stupid and evil instead.  (It's not a very nuanced screenplay.)  So the question that I had to ask myself, why is Things to Come so enjoyable, when Belle, doing much the same thing, frankly kind of sucks?  The most obvious answer is "There are not superplanes, nor underground science cities, nor enormous space guns in Belle."  And certainly those oversights do hurt Amma Asante's film.

However, I think it is a more fundamental issue than that, for there are other cool things to look at in Belle, such as the Duke of Northumberland's gorgeously-maintained museum-mansion and Sarah Gadon's even more gorgeously-maintained decolletage.  No, it's this: Things to Come is a propaganda tract, to be sure—but, true to its title, it is a forward-looking document, a statement of things H.G. Wells hoped would come, a utopian incitement to change.  In its time it presented an utterly radical, even subversive ideology; in our time, this is even more the case.

Belle likewise argues forcefully and passionately with every last word of its screenplay... for things we pretty much all already believe, or at least that no one in their right mind would argue against.  This is not to say that racism and sexism and even slavery no longer exist, only that it does not take an hour and forty minutes of propaganda to convince the average person that they are evils.  The result is a movie where no individual scene is actually bad, but nearly every individual scene is redundant, and hence pretty soon every individual scene is boring, even the "important" ones—though we only know they are important because the music swells and the characters, apparently aware of their own underscoring, shout their programs ever louder to be heard over it.

Dido (etc.) Lindsey is the illegitimate child of the Royal Navy's Captain John Lindsey, an English nobleman with a heart of gold and a screentime that can be counted in the seconds.  Upon learning of his paramour's death, he rescues their mixed-race daughter from the slums of somewhere in the New World and brings her back with him, to the Old.  Arguing forcefully and passionately at his kin, the Lord and Lady Murray, he convinces them to take her in, for he is a Royal Navy Captain and will be dead soon.

Somehow I bet his movie was a lot more fun.

Presently, we meet Dido—the Belle of the title is, properly speaking, her mother, although the Belle of the title was, properly speaking, not named Belle at all, but Maria, surname Bell, but, most properly speaking, whatever.  The Young Dido is portrayed by the most awful child actor.  I don't recall her ever saying a word, but her bizarrely sarcastic expression seems wrought in iron upon her face, and it makes a hideous impression entirely out of proportion to her actual presence in the film.  She is fortunately soon supplanted by Gugu Mbatha-Raw, who is very good, as well as very forceful and passionate.

Raised as an English lady alongside her sister-cousin Elizabeth, Dido finds herself at the intersection of two despicable social currents, the racism of the late 18th century and the sexism of the late 18th century.  Forcefully and passionately, she resists society's invidious attempts to push her to the margins, asking questions like why she is of too low a rank to formally dine with guests but too high to eat with the servants.  Her struggle is somewhat eased by dint of her inheritance, providing her an income of 4000 pounds a year.

She is, at length, engaged to marry.  This is quite a surprise given her position (though it is less of one due to her obscene wealth).  Sadly, though, her intended is a dick, lacking in forcefulness as well as passion, and his brother is even worse, though it must be said that he is suitably forceful and passionate, just about the wrong things, like assaulting women and making racist comments.  Nevertheless, due to apparently nothing more than inertia, Dido seems intent upon going through with it.  However, things really become forceful and passionate when she meets a young would-be attorney, John Davinier, who forcefully and passionately (albeit gingerly) breaks the news to her of the Zong affair, a legal case revolving around the insurability of slaves murdered en route to the Caribbean, and that her uncle Lord Murray is in the midst of deciding.

Your historical accuracy sure is convenient.

Unlike her namesake, Dido chooses wisely in love, for Davinier is good looking, forceful, and passionate, even though—like both the film and my continual use of the adjectives "forceful" and "passionate"—he also is tedious and poor.  Davinier courts her, and though his sweet nothings are comprised principally of abolitionist slogans, he does—as an afterthought—tell her that she's beautiful, once.  Thanks to Davinier's advocacy and Dido's personal intervention, the film climaxes in a wildly fictionalized version of the decision in the Zong appeal, wherein English law recognizes black people as human, and Murray forcefully and passionately tells us that slavery and also murder are just not right.  (Having read the actual decision, I am led to believe the real Murray, largely devoid of either force or passion, decided that new evidence of negligence and fraud on the part of the slaver crew justified a new trial, which was apparently never held.)

The real question is, "What is Belle?"  Bereft of anything we'd recognize as sexuality, love, or even an 18th century simulacrum of desire, it's not a romance.  With the Zong case mentioned maybe once every twenty minutes, it's not much of a legal thriller.  It is not a character study, for it has no characters.  It has melodramatic elements, but these elements are ruined thanks not only to the rather low stakes for anyone on the actual screen, but also to the excruciatingly tiresome and circuitous dialogue, that I suppose owes much to Austen (though I would not know), and which at times is so complex and arch that it is difficult to even comprehend what, exactly, is being said.

It's a period piece, of course, but I'm loath to call "period piece" a genre.  It's undeniably a biography—but it is never a good sign to have to describe any movie with an epithet as vile as "biopic."

Still, it is a period piece, set in the late 18th century, so naturally the mind goes to Barry Lyndon, the second best Seven Years War film ever made.  Upon learning of the comparatively miniscule budget Asante was working with—it was shot on (gasp!) digital—I accede that Belle rather lives up to its name, though in the moment I was most discomfited by the very obvious electric lights that viciously sandblast the players during so many of the night scenes.  Still, it needs be said that when they can get away with sunlight and candlelight, Belle really is beautiful.  There are even a few shots here and there worthy of Lyndon, which the cinematographer namedrops in an interview, though I reckon this is simply because he had to.  For there is a definite and unmistakeable contrast here—it may seem a tautology, but just about every shot in Lyndon is worthy of Lyndon.  All and all, however, Belle is lovely to look at, and although this is largely due to the custodial efforts of the keepers of Britain's history, I have few cognizable complaints on this count. 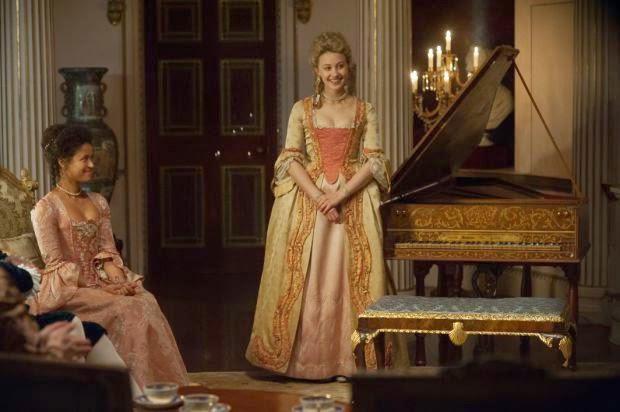 No cognizable complaints at all. 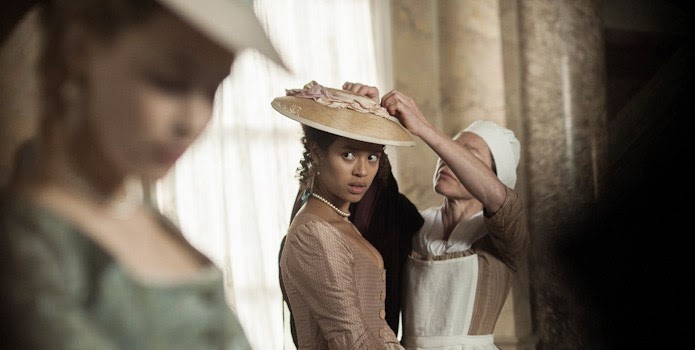 But, just to reiterate, God is it boring.  If you need 18th century, er, thrills, turn to Lyndon.  (If you need more easily-digested thrills and/or only have two hours to kill, turn to The Last of the Mohicans, the best Seven Years War film.)  Additionally, I surmise that at least some of those billions of Austen adaptations must be interesting.  Also, Blackadder the Third is very funny in precisely the way that Belle is absolutely not.  And Burton's Sleepy Hollow is great, too, though I fear I'm losing the thread a bit here, given that if you've sought out Belle, you are far likelier in the mood for a true story that deals in the miseries of racism.

If this is so, while I'm afraid we must turn to the 19th century, I advise you to seek out Amistad or Lincoln instead, for each have their moments, and both offer substantially (and substantively) better legal procedure than Belle's hazy, off-screened process.  Finally, though I hardly need say it, 12 Years a Slave exists, and it does all that Belle refuses to.  It has a genre; it has at least one character that you feel existed as a human being; and it has filmmaking behind it so expert that, in comparison, Belle is barely even a motion picture.  With regards to force and to passion, of course, there is simply no comparison to be made whatsoever.

The only reason Belle even has to exist, at least in the form it took, is the one offered by my girlfriend—it's the easy-going polemic against slavery.  This suggests that Belle was made to undermine the beliefs of secret racists.  Surely there must be easier ways to go about it than through hypnotism—but I have to admit, I am getting sleepy.  Very, very sleepy.