Norman and the terrible, horrible, no good, very bad day 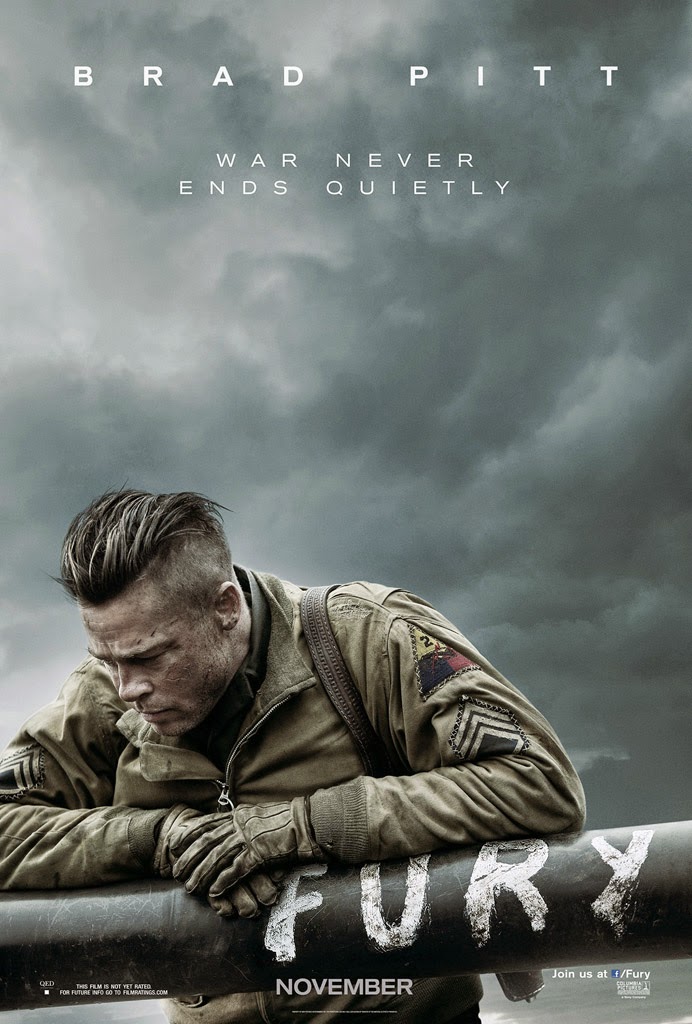 "Ideals are peaceful.  History is violent."  That is an actual line from Fury, and sums up its approach, disinterested in any judgment beyond "war is hell."  Perhaps that disinterest best represents the experience of soldiering, but moral disengagement is not exactly equal to complete moral lapse.  Oh, Fury certainly makes sure we know that Nazis were bad.  But it is equally keen to let us know that by April 1945, so were we—in close to equal measure, and in much the same arbitrary, brutish way, serving as capricious occupiers and cruel wardens.  Fury emphasizes its point through what it supposes is realism.

At least, as soon as it's done with its silly art-film opening.

Realism, for Fury, is a neverending parade of grotesqueries, all of which seem to occur at 6 a.m. (judging from the omnipresent fog over Germany that never lifts), all occurring at the right moment for maximum (theoretical) dramatic effect, and all implemented to really, really impress upon you the notion that war is not healthy for flowers and other living things.

But, seriously, it really offends Helios, God of the Sun.

Let's put aside the fact that the film has been insanely mismarketed upon the basis of exciting tank action, without tipping its hand as to its actual purpose.  It's not David Ayer's fault that Sony (probably correctly) thought that general audiences would be more interested in watching five scruffy soldiers in a Sherman tank fight for their lives against Hitler's elite panzertruppen than they would be, say, watching those scruffy soldiers execute unarmed prisoners, or utter implied rape threats toward a German girl (and kind-of actually rape said German girl).  Of course, it is David Ayer's fault that those things are in his movie.  Just like it's his fault—indeed, his design—that four of our scruffy soldiers have been ground down into bloodthirsty animals by the war, long before we meet them.  Regrettably, it was also his design that three of them would also be hillbilly morons that would have been uninteresting and off-putting even if they weren't situationally required to be sociopaths.  (In truth, one of these hillbillies is a Mexican-American, but he differs from the Anglo morons principally in his accent.)  Unavoidably, it is specifically David Ayer's design that Fury is a recapitulation of his own work—Training Day In a Tank—and from it we can learn that his excellent script for that film drew its power from a well-defined hero who struggled with his conscience rather than surrendering it wholesale in a slapdash and hurried "character arc," for lack of a better term.  Perhaps I prefer Training Day because it was comparatively morally uncomplicated, while some have found Fury refreshingly morally complex; but I can't really agree that it is complex, because it mimics too closely the war stories a seventeen year old would write under the pretense that he was too cool for school, such as I in fact did write when I was seventeen.  They weren't good either.

Perhaps you remember this tender romantic scene from the trailer.  Like everything else in the actual film, it is fucking disgusting.

Above is the fifth member of the Sherman's crew.  He is our sub-Hawkeian protagonist, and presumably our viewpoint character—although this presumes far too much.  His name is Norman.  He's trained as a typist, so he's been assigned as the tank's new assistant driver.  (Come for the manufactured sense of hopelessness, but stay for the cliches.)

It is, obviously, okay that Fury is not fun.  It would be more okay if it were not fun in a more measured way, so that in its constant need to fill every single frame with amorality and horror it didn't wind up sort of unintentionally funny.  It would be even more okay if the corruption of its putative moral center, who is equal parts coward, idiot, and human—at least at first—were handled in such a way that he fell from a more dignified grace in the first instance, and in the second if he didn't become a kill-crazy devotee of his tank crew's cult overnight. Fury would be perfectly okay if it were not, finally, beholden to be the cool tank adventure that was promised, too.  For that is where Fury makes its fatal mistake.

If you happened into Fury an hour late, you might be less confused than if you showed up on time.  You would see the camaraderie between this stereotyped crew of yokels, led by their wise and battle-hardened leader, going under the staggeringly misjudged name of "Wardaddy" (I have referred to him as "Sgt. Collier"), and you would think, "Oh, these are good men, fighting fascism, risking and/or laying down their lives for democracy and freedom and human decency.  I should care!"  Fury certainly expects you care.  Every element in the back half of this film, from the narrative beats to the cloying score, is exactly what you would have expected simply from hearing the premise—more or less thrilling, rather well done, and something I'd like to love, based on its use of real vintage tanks, which are truly awesome to behold.

Except I wasn't late, and I saw everything in the preceding hour, and as a result I watched these animals struggle for survival without feeling anything.  Turns out our boys are hardly different from the enemy—indeed, in the film's most blatant bid for meaning, they're worse.  If Ayer's goal was to level the field for an unbiased valuation of human life, he was triumphantly successful—but, unfortunately, in the most alienating and negative sense.  It says a lot about Fury's need to feed to its addiction to spiritual degradation that when it introduces about the only horror of war it hadn't yet, I was forced to stifle a bitter laugh at the absurdity of one character's death in the very climax.  In any event, it's not like I liked him as a person, or even much recognized him as one, any more than the hundred dead SS men that curl around the Sherman like a wreath.  (Indeed, this action sequence is odd enough in that the SS battalion, while not radically outmatched, is extremely poorly led—so you did stay for the cliches, I see—and if you have a surfeit of empathy, which I don't, you might feel as bad for them as the Americans while they get fed into the Brad Pitt-operated meatgrinder.)

Fury makes so many assumptions of your basic patriotism and anti-Nazism that I almost wonder if Ayer had originally intended on an entirely different structure, a non-linear narrative where we begin with the Good Guys facing down the Nazi wave in a broken tank and committing their acts of ultraviolent heroism, only to have this well-worn rug pulled from beneath our feet in flashback, as we learn how vile they really are.  I don't know if this would have saved Fury—it would still be overwrought, inhuman, and a little seditious—but it would have been vastly more interesting.  I suggest an experiment.  I just need to find somebody to watch it in the way my grandmother used to watch movies back in the actual 1940s, wandering in at a random time, often halfway through the feature, and just staying through the repeat show until she got to where she came in.  Perhaps she'd have enjoyed Fury more.  Probably not.  I'm offended by its intent to let these five monsters stand in for America's fighting men, on behalf of the Greatest Generation and myself.

Given their depravity, I also half-wonder if this started off as a script about a T-34 crew in the last days of the war on the Eastern Front—at least then they would have a better excuse.

There's part of me, finally, that wonders if this is one of those films where you have to be in a very specific mood to appreciate, a mood to wallow wholeheartedly in the muck of despair.  But then I think to other war films that were so much more artful in their nihilism.  Apocalypse Now and Full Metal Jacket possess a sense of proportion in comparison—and yes, great movies they may be, but that is a joke.  (If you notice I reference films about Vietnam rather than World War II—congratulations.  You've cracked David Ayer's secret code.)

Still, you could take the worst movie, and put a well-made Tiger vs. Sherman showdown in it, and make it better, right?  Well, you are certainly not wrong.