In space, no one can hear you psychologically fracture 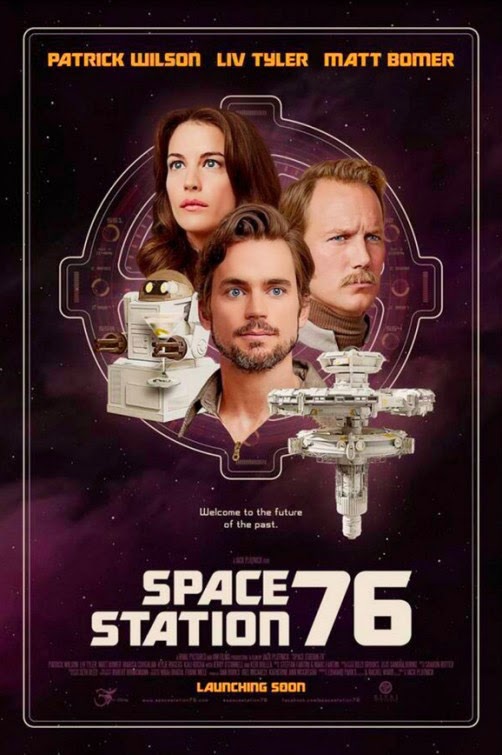 Are you ready for some wacky fun times in the stupid future our parents imagined?  It's got smoking!  And Valium!  And just look at that silly poster!  Ha ha!

So the very first thing to understand about Space Station 76, which has been marketed as a comedy, is that it is only funny in fits and starts, and that most of the time, even when it is funny, it's funny because it's so depressing that you just have to laugh at it.  This is the case even in its best, most deliberately comedic sequences, all featuring Dr. Bot, the robot therapist, whom we learn—in the best of those sequences—does not possess what anyone would describe as "strong AI."

Dr. Bot aside, only here and there does SS76 seek to mine its raygun gothic setting for jokes.  It is emphatically not The High Frontier With Laughs, and maybe that's for the best, because they made that movie already, called it 2001: A Space Travesty, and my recollection is that it was terrible.  However, I might be confusing it with that other waste of Leslie Nielsen, Dracula: Dead and Loving It, which has nothing to do with space stations—but was definitely terrible.  Unlike either of those strictly parodic films, SS76 makes but one direct reference to any other property, and (to its credit) it does so extraordinarily cleverly—keep your eyes peeled for Keir "Dave Bowman" Dullea in a vanishly small role, in a nifty visual gag involving, of all things, the framing of his face on a videophone.

The other big conceit of SS76 is that (as the name implies) it takes place in a future where the 1970s never stopped.  This is rather more integral, but even that influence is mostly cosmetic, with the major exception that its protagonist—well, the man played by its most beloved star—is a gay fellow kept tightly closeted by the retrograde conventions of the film's falsely-futuristic neverwhen.

Instead of anything remotely like an energetic romp, then, Space Station 76 is principally a Caucasian melodrama that just happens to be set on Omega 76, a refueling station in deep space crewed by sad people.  I have seen it compared to Ang Lee's The Ice Storm, and I'm sure that's very accurate, but since I've never seen The Ice Storm I'll have to turn instead to American Beauty, a movie I rather love and which everyone else seems to have decided sucked over a decade ago.  I even learned something about American Beauty by watching SS76—namely, that if you took out the ephebophilic seduction plot that comprises the narrative spine of Beauty, what remained would be a shapeless mass, barely capable of forward momentum at all.  On the plus side, the "antigravity game" that represents the innocent hopes of the child in this movie is far, far less likely to become an instant embarrassment as did the "beauty in the world," represented as it was by a fucking grocery bag.

My heart is just going to cave in.

But this spinelessness goes a long way in explaining why SS76 isn't merely not as funny as, say, Airplane 2: The Sequel, but not half as funny as American Beauty itself.  SS76 lacks an active, plot-driving character whose hijinks might be considered ridiculous and, hence, amusing.  Its characters are all passive lumps.

Arriving on Omega 76 is one of those lumps, Jessica, the new executive officer.  She's meant to be hyperefficient, and I think they made a deliberate choice to counterpoise this by casting Liv Tyler, whose little girl voice and might-be-high delivery make something of a hash of a supplied trait like technical competence.  Also, she's barren, something we find out twice, and thus are somewhat compelled to suppose is a big reason why she's kind of weird and brittle.  Once aboard, she meets Captain Glenn, and in comparison she does come off as hyperefficient, for Glenn is a sullen, heartbroken, chain-smoking alcoholic living in denial of his nature.  Embodied by the great Patrick Wilson and replete with stammering speech patterns and over-the-top, actually-visible sublimation, Glenn is the most deliberately funny character in the film; and since he is embodied by the great Patrick Wilson, he is also the most affecting, at least of the adults.

To round out the cast, there's Misty and Ted, who don't love each other anymore, and Steve and Donna, who might but certainly aren't very good at it, and finally there's Sunshine.  Sunshine is Misty and (probably) Ted's daughter, the only child on the ship other than a newborn infant, and impossibly lonely as a result.  (I'll simply mention here that Kylie Rogers is a top-flight child actress, displaying a realistic precocity and capable of subtle as well as big emotions, and is never—not once—annoying in the slightest.)

SS76 contents itself with detailing the harms they inflict upon each other, and sometimes they're impressive, and sometimes they're a little too blatantly symbolic to properly register—for example, Sunshine's pet gerbil's penchant for eating her children and her own mother's coldly inhuman explanation of this macabre behavior, as if she were simply describing the process to an adult stranger rather than her horrified and confused daughter.  (That said, by the time they're tossing a third decapitated gerbil infant into the trash, it's pretty amusing in its boldness.)

What SS76 lacks more than anything is coherence, and until the last half-hour it is precisely the shapeless mass we might have predicted—a hang-out movie populated by characters you're not terribly comfortable hanging out with.  Its structure isn't just loose, it's occasionally clumsy, both on a script and a filmmaking level.  Take the introduction to Misty, which is also our introduction to therapy with Dr. Bot; the scene is crudely inserted into the first few minutes of the picture and it may well confuse the uninitiated as to whether we're even still on the station.  Or, if you like, take the extramarital affair between two characters who do not quite manage to share a single exchange of dialogue between them—but, perhaps, that was the point.  In case it was, linger instead on the moment where the camera angle permits the blocking to eclipse Sunshine's whole body behind Liv Tyler's noggin, and not to any obvious thematic end, since with the very next cut, we get a closeup of the tyke.  (We are made to wonder if SS76 was shot in script order, since it seems to get significantly better toward the end in terms of pure technique, with bracingly flat lighting schemes giving way to more interesting ones, framing becoming more adept, and even the performances, particularly Marisa Coughlan's, vastly improving, becoming sharper and better-defined with each scene.)

If it lacks coherence, though, it's because it was clearly supposed to, and while that still counts as a sin, it's not a major one.  It's a film about people with incoherent lives, after all, who regain a little bit of coherence in the end... an end which is, of course, inspired by Magnolia.  Seriously—for all that the aesthetics of the 1970s sort-of inform the film, a more accurate title in terms of its content would have been Space Station 99.  It would also explain the trash CGI, and forgive SS76 its atrocious lack of period-specific model work—because, and I am being real here, that is a much more serious and annoying problem than its lack of originality.

In conclusion—come for the melancholy, stay for the infinite sadness, I guess?  For its flaws, and even though this review hardly makes it seem this might be the case, I actually liked it a lot.  Patrick Wilson, everybody: can you deny him?  Yeah.  I didn't think so.