This play's the thing 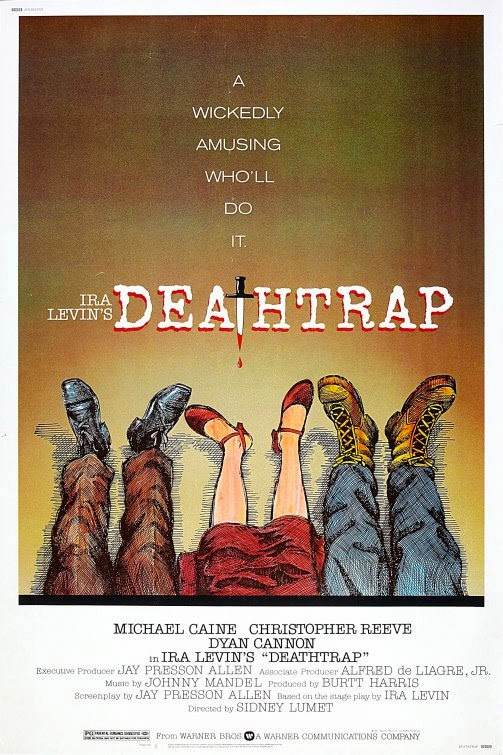 Between Rope and Grand Piano, there was Deathtrap. 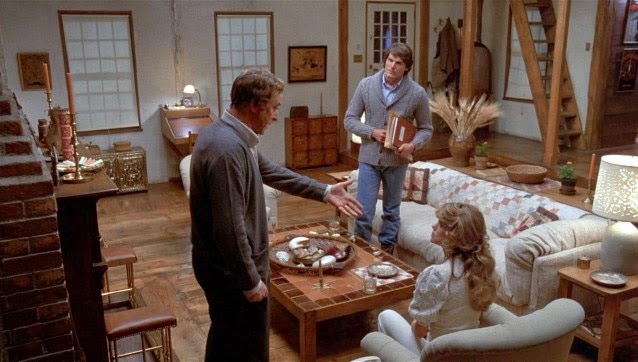 One of the unsung pleasures of maintaining a crappy movie blog while trying to hold onto a sliver of intellectual honesty is that you are often forced, sometimes quite against your will, into deep background research.  It is a pleasure, mind you, but it almost always manifests first as pain: you'll wind up watching half a dozen movies to review just one, all so you can offer profundities like "slashers involve a lot of violence against women" or "I like the American version better."  But sometimes it's unalloyed happiness all the way, and that's what happened when I tasked myself to review Inside Man.  That film stands atop the shoulders of a giant—and thus I sat down with a quartet of Sidney Lumet films that I had never previously watched.  Two were movies everybody's already seen but me.  And I feel suitably ashamed: these were Dog Day Afternoon and Serpico.  The third is more of an obscurity, but I'd heartily recommend The Anderson Tapes as well.  Then there's the one that had basically no relationship to the subject under review at all, the one that hardly anyone ever talks about thirty-two years later, and the one that—as soon as I read the premise—I knew I had to see for reasons beyond mere education.  That one was Deathtrap.  And, despite an egregious flaw imported from the source material, it might be the best film Sidney Lumet ever made.  And that means it's incredible.

But beyond that premise, I can barely discuss the thing, for Deathtrap is a thriller machine of truly fragile beauty.  I am not sure there was a movie made between Soylent Green and The Sixth Sense more vulnerable to being ruined by revealing its secrets.  Thank God no one talks about it!

That premise really is a tempting one.  We begin with Sidney Bruhl, the tottering colossus of Broadway.  He has written smash plays in the past, but now his ideas and talent seem to have bled away.  His current production has met disastrous audience reaction and blistering reviews.  So he gets drunk and goes home, where he verbally abuses his wife, Myra, whom we learn has basically been supporting him for years, with a smile on her face and a chipper, almost-manic demeanor that (as we also learn) breaks down easily into panic.  But fear not for Sidney Bruhl, for in his mailbox has arrived what he comes to regard as his salvation.  It is a play by one of his seminar students, entitled—naturally—Deathtrap.  It is good.  It's better than good.  It is so good, Sidney exclaims, "even a talented director couldn't ruin it!"

And its author, Clifford Anderson, has not yet shown it another living soul. 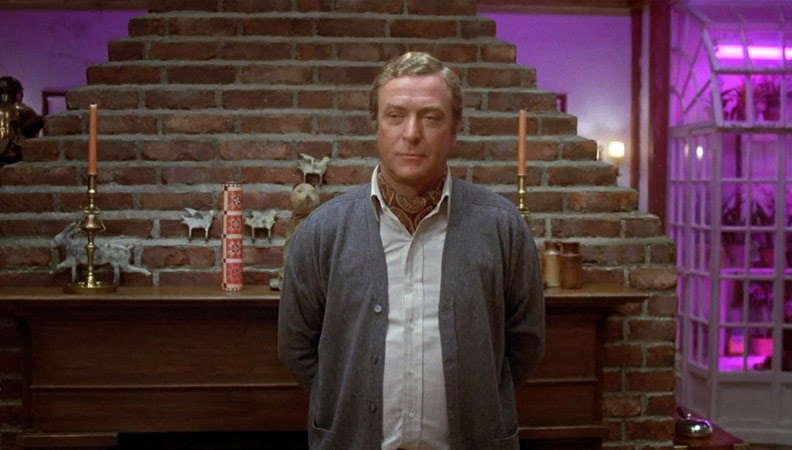 It doesn't take the author of a rollicking thriller to guess why a Michael Caine character might invite him over to dinner.

This scenario plays out, then becomes warped and complicated beyond all expectation.  Nothing is as it appears.  Even a psychic gets into the mix—she being the "egregious flaw" of the source material, but the severest problem with her is Irene Worth's atrociously camp "undifferentiated European" performance of the already-borderline character.

She represents the sole acting failure in the film.  Whereas at least one of the actors is almost painfully perfect: to convey the midlife of a great entertainer in decline, of course we have Michael Caine.  (It wasn't two years later that Caine was in Blame It On Rio, and three years later came Jaws: The Revenge.)  But I kid Mr. Caine, because he can take it: his playwright is precise, literate viciousness incarnated.  Caine's achievement is to make it hard to give a damn that anyone played the role before, and almost impossible to believe that anyone could have ever had the guts to play it again.  I'd absolutely quail at the prospect of seeing Deathtrap live, because Sidney Bruhl would be someone else and, therefore, someone worse.  Meanwhile, Chris Reeve shades aw-shucks charm into mad, toothy smiles, and shocks by holding his own.  His devious Clifford sometimes manages the impossible, outright dominating Caine.  Finally, Dyna Cannon masters her tricky role, and in a way she's almost better than either one, or at least doing more difficult work: Myra is almost predestined to become annoying, and Cannon never—not once—lets that occur.  The rapport between the performers welds them into something even greater than the sum of their parts, and the fluidity of their dialogue is crucial to Deathtrap's profound impact.

Indeed, Deathtrap is a thriller much like Rope itself—and that, you know, is a comparison I'd never make idly.  It is absolutely dependent on complex verbal sparring with thinly-veiled euphemisms serving as the weapons.  Tension is built not out of silence and stealth, but with feverish conversation, that only ceases when it explodes into storms (sometimes literal) of action and revelation.

Deathtrap, especially in the sublimity of its first act, is crafted so exceptionally well that it is beyond reproach—even if you manage to get yourself ahead of one twist, you won't get ahead of the other, let alone the third, and then you'll still wonder how there might be a full hour of movie remaining on the clock—but not for long.  The second act isn't as strong as the first—but what could be?  (Its weakness, such as it is, is owed to the greater presence of the psychic; but at least the film wisely, if subliminally, concedes she is a plot contrivance in its final, gonzo gesture.)  Deathtrap is billed sometimes as a comedy-thriller; I don't think this is really accurate, but one is certainly permitted to laugh with joy.  There's a transcendent giddiness that Deathtrap shares with the greatest plot-mechanical thrillers.  It makes you nervously titter or happily groan with exhilaration as it stacks reveal upon reveal.  Above all, Deathtrap's success is thanks to its players and Jay Presson Allen's reworked script; but let us not forget the men who put it together.

First, Deathtrap is amongst Lumet's most overtly stylish films.  Lumet was ordinarily a director of quiet, engaging hypercompetence, rather than bold, bullying visuals (though he was certainly quite capable of such).  But given a talky film set in essentially a single location, he opts to stage his sequences with legitimately Hitchcockian bravura.  My favorite is the long, long take of Sidney walking in endless circles around the telephone (and the camera) as he calmly puts his plan into action: the camera revolves to track him, so the room itself spins.  Every dozen seconds we see Myra enter the background, with her look of disbelieving terror, of no more account to Sidney as the wall behind her.  There are other, and just as astonishing, visual choices to come.  There's only one missed visual note in the whole film.  (I regret to say it's during that long take of Sidney—it's truncated with a dropped-in, wholly-unnecessary reaction shot of Myra.  It mars the perfection of the moment like a minor scar on a beautiful face—not by very much, but noticeably for the contrast.)

The scenario and the camera choices would each alone be enough to throw around a superlative like "Hitchcockian"—hell, the screenwriter penned Marnie, and there's a reference to Goddamned brandy in this movie.  But once you take into account Tony Walton's truly extraordinary production design, it'd be practically a crime not to mention the master's influence.  After all, the whole film (or very nearly the whole film) takes place in the windmill from Foreign Correspondent, only now repurposed as one of the most bizarre homes in cinema history.  (And, breathtakingly, it is a real house.)  The bedroom ceiling of the Bruhl's abode is an arabesque of gears.  The fireplace is a near-ruin of brick in the center of the living room.  Sidney's "office," undifferentiated from the living room (thus slyly betraying its stageplay origin), is adorned with instruments of war and torture.  The walls and floors are largely wood, but a greenhouse is lit by garish neon light, rendering the living room an unimaginably lurid color scheme of brown and white and purple, a palette that shouldn't work at all, but unaccountably and absolutely does.  (If it again recalls, in different hues, the ending sequence of Rope, that is surely no crime.)

Walton doubled as costume designer on Deathtrap, as was his wont (he was a frequent collaborator with Lumet).  He joins the ranks of such omnitalented luminaries as Danilo Donati (of Flash Gordon immortality) and Catherine Martin (the genius behind Baz Luhrman's exercises in style).  I have a great need to tell you that Michael Caine wears a paisley smoking jacket coordinated with the outlandish color scheme Walton has already dictated by his production design.  Indeed, Deathtrap has the vivid color work of a De Palma film—and one suspects the Hitchcock superfan was purple with enraged envy that someone beat him at his own game.  Taken altogether as a piece of cinema, Deathtrap ain't just a treat to listen to, but to behold.

So go behold it already: Deathtrap was the longest-running Broadway thriller ever, and if the film is any guide, for damned good reason.  It's a nearly-perfect object, wonderful and clever, and if you love the genre, I don't so much recommend the film as I demand you see it.  If this thriller is at turns quite preposterous indeed—well, so, so much the better.

Plus—BIG spoiler—[if you ever wanted to see Alfred Pennyworth and Superman make out, this is your chance!]