There'll be hamburgers on the plane 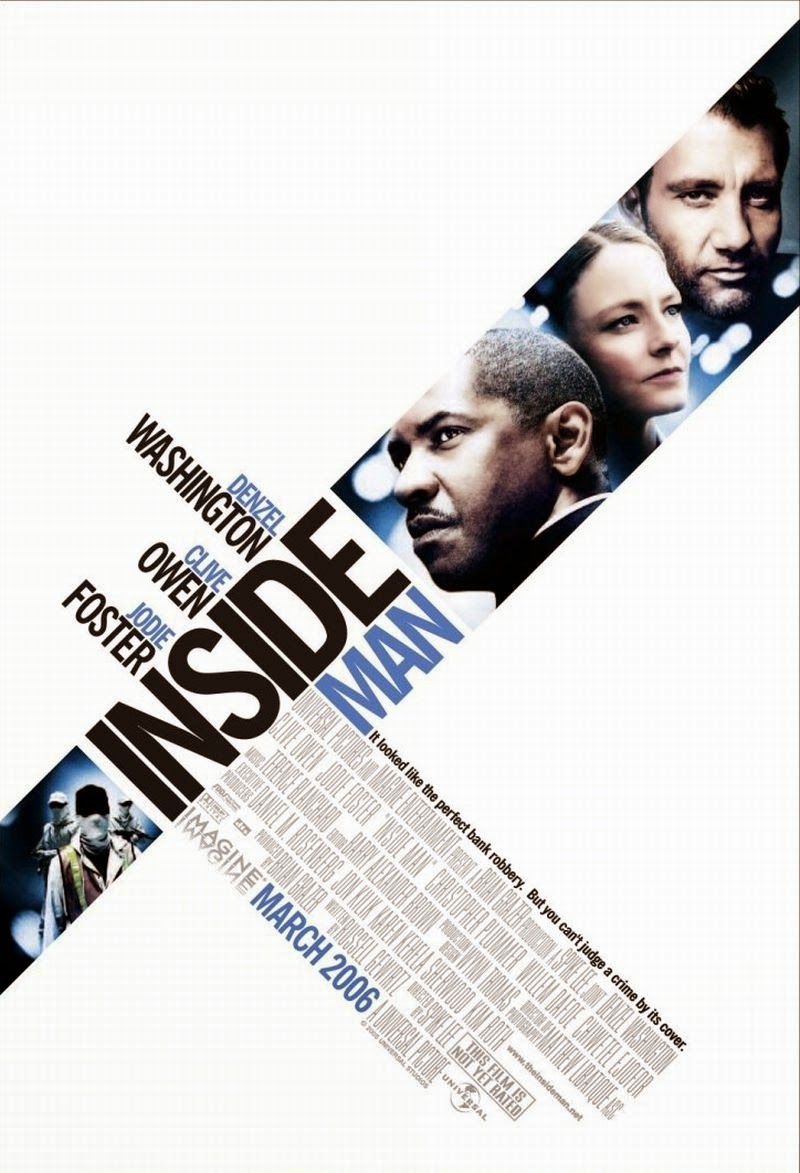 The ne plus ultra of the heist genre.

In 2012, Spike Lee gave Quentin Tarantino a verbal slap.  Never a tremendous fan of Tarantino, for perhaps obvious reasons, Lee panned Django Unchained without even seeing it.  His exact words are too sharp to merely paraphrase.  As the man tweeted:


"American Slavery Was Not A Sergio Leone Spaghetti Western.It Was A Holocaust.My Ancestors Are Slaves. Stolen From Africa. I Will Honor Them."

Lee, of course, is entitled to his conscience.  But if he could have chosen any poorer words to express himself short of calling Tarantino a honky, it's difficult to imagine what they might have been.  By invoking the Holocaust, he inevitably and immediately cast our minds back to 2006.  And, at that point, the joke basically wrote itself.

Maybe Lee will never know how seriously Django actually took slavery—within the confines of Tarantino's preferred wish-fulfillment revenge-thriller paradigm, anyway—but it must not have occurred to him that he'd helmed his own wish-fulfillment revenge-thriller not long before.  In Lee's picture, a gang of near-godlike bank robbers steal back a fortune in Jewish blood diamonds.  In the process and by design, they expose a Nazi collaborator who had gone respectable in the post-war years, burying his sins deep—but not deep enough—within the foundations of his empire.  Incidentally, in Lee's commentary track for the film, he describes the diamonds and their Nazi documentation as—I quote—"the maguffin."

Yet the very last thing I want to do here is argue that Inside Man does not engage with the Holocaust, because it does.  Inside Man listens for its echoes, still reverberating sixty-one years after the last German death camp was closed, and captures its reflections.  It's Lee's willingness to take tangents, powered by Russel Gewirtz' observant script, that keeps Inside Man's impressive plot mechanics from entirely overwhelming its humanity.

Inside Man is famously organized as a love-hate letter to post-9/11 NYC.  It opens in earnest with a travelogue, taking us from the Coney Island Cyclone all the way down to Manhattan's far more terrifying rollercoaster ride, Wall Street.  It's a real melting pot in Inside Man—constantly threatening to boil over.  Racism is our constant companion here, ranging from the low-key to the kind of egregious casual bigotry that I doubt you'd ever see a white cop presenting in front a black superior officer (even if it does motivate a crucial third-act reveal).  There are ethnicities not even present in the film who get stereotyped and insulted.  But not by the villains.  They're as circumspect and proper as their social station dictates.  United by class, their enemy is all mankind.

Meanwhile, everyone else is either intrinsically racist, from Denzel on down, or absolutely willing to use the one thing that truly makes us Americans—our ignorance of other cultures—to their tactical advantage.  But for every gesture that suggests that America is basically one step away from a racist police state, like the NYPD's brutality toward a Sikh hostage whom they mistake for a bomb-wielding Islamist, there's another that celebrates our diversity, as when the gawking New Yorkers clustered around the crime scene turn out to be a more valuable source for linguistic expertise than the State Department.

But wait: there's more!  We get a nutritious helping of misogyny too, by way of Inside Man's depiction of Jodie Foster's amoral fixer operating in a man's world.  (Not to mention the misogyny on display in its jokey depiction of Kim Director's pendulous breasts—though they are admittedly so unavoidable that I wonder if the cup-size subplot was dictated by casting rather than the script.)  As for the delightfully unsubtle equation of the rich with (in order) bank robbers, street gangsters, and finally the NSDAP—well, that's just the sugar on my sundae.  Inside Man is an outcry against the whitewashing of history and a refusal to respect the status quo.  We're all in this shit together, whether we want to be or not, and it's this pervasive, painful awareness that makes this popcorn entertainment truly what it says at the end: a Sidney Lumet film.

I mean "a Spike Lee joint."  Whatever.

As is breathtakingly clear to anyone who's seen both movies, Inside Man is a sort of redo of Lumet's Dog Day Afternoon, only replacing Afternoon's gritty, naturalistic, and stupid criminals with the peerless international jewel thieves of a 1960s caper film.  A bank in New York is robbed; the robbery immediately becomes a hostage situation; a fierce battle of wits ensues between the gang's leader and the detective set to trap him; and this time, the criminals win.  The references to Afternoon range from the direct (Afternoon is specifically mentioned in dialogue); to the parallel (the smoke that alerts the police); to the revealing (the robbers' impossible demands for a plane); to the metatextual (the casting of bit players from Afternoon for bit roles in Inside Man); to the outright fannish in their effort to set right what once went wrong (the gang in Inside Man are all codenamed variations on "Steve"—a name they all share with Afternoon's erstwhile third man, who bailed on Sonny and Sal in the first eight minutes of their movie).  No doubt Lee would've dug up John Cazale's body and used that as the prop for the "hostage execution," too, except the authorities found him hanging around the cemetery with a shovel and a pair of dollies.

The borrowing from Lumet doesn't end there.  The mastermind offers a veiled compliment to this movie's honest cop, invoking Frank Serpico.  More importantly, there's Lee's lift from The Anderson Tapes.  That enjoyable 1971 Lumet B-side was his only heist film to really merit the designation.  In the climax of Anderson, the film begins to jump forward in time.  Small vignettes with the victims already giving their statements to the police are placed athwart scenes of the heist as it occurs.  In the background, we see a body wheeled out; yet we realize from the tenor of the victims' testimony that surely no innocents have been hurt.

Lee borrows Lumet's tricky temporal cut-up and doubles down on it, adding in some Matrix green and turning the saturation up to full blast for easier identification.  Inside Man's interrogation scenes were improvised, not scripted.  As much as they nonetheless manage to accentuate the mystery, their emphasis is at least as much upon character and humor.  What they wind up making crystal clear is the fact that nobody is reacting to the "hostage execution," or to any other deaths.  (There's enough of these scenes, too, that just by counting we can tell no character with a speaking part's gotten killed.)  Lee needs these scenes.  He's undertaking a tightrope walk, keeping his tone precisely halfway twain the social realism for which Lee was already known and the preposterous thriller awesomeness for which he then wasn't.

See, maybe the biggest difference between Lee's film's heroes and those of Dog Day Afternoon is that their professionalism requires terroristic and occasionally almost wanton cruelty.  The flashforwards are there to keep you from ever forgetting what was promised you by Clive Owen in his direct address to the camera, in the very first shot of the film: Dalton Russell is the hero of this movie.  It doesn't matter that Washington gets top billing—he doesn't have a soliloquy.  Lee needs us to trust him, and believe his assertion that our sympathies should never leave the robbers.  Lee's control of time lets us.

Inside Man is as obviously controlled on a visual level as it is in its structure.  It's a long way from the quiet style of Lumet on the sweatstained filmstock of Afternoon.  It is no less a masterpiece for it.  The only possible misstep is the utter ubiquity of decreased shutter angle, but this is only a sin of enthusiasm, not malice.  But meanwhile, restless Steadicam long-takes capture the tension, and something like half the picture consists of elegant crane-shots.  The Scope frame is, as usual, a boon rather than a burden, especially in those signature double-dolly shots that nearly lift characters bodily off the screen.

By God, how this technique confused and aroused me in 2006.

The color palette is gray, and it is blue, too; and normally I'd tell you this sucks.  Here, however, it's not really the doing of Darren Aronofsky's champion cinematographer Matthew Libattique.  The dark blues, glinting silvers, and chalky slate grays of Wall Street swarming with cops simply look like what they look like.  Combined with shutter angle trickery and Terence Blacnhard's strangely-effective collection of notes he called a score, the result is a stark militarism—and all of it without cheating, or at least not cheating very much.

Costume and production design play their inestimable parts.  The forbidding Art Deco wonder of 20 Exchange Place largely plays itself, whilst Wynn Thomas' gleaming vault is the stand-out of the purpose-built sets.  Meanwhile, Donna Berwick does her career best work with the iconic painter's clothes worn by the gang and—once their strategem is in effect—their hostages, as well.

Finally, then, let's touch on the plot—by which I mean the plan.  Already in motion by the time the inimitable opening credits roll and the perfectly-incongruous Bollywood number "Chaiyya Chaiyya" spins up, Inside Man presents as a feature-length climax, displaying its dissatisfaction with the slow wind-up of lesser heist movies.  The plan is maybe not as perfect as Russell (and the script) supposes—that missing .357 Magnum is problematic, even more than the presumed fact that Washington's Det. Frazier ought to be able to identify that his opposite number is not amongst the otherwise undifferentiated hostages and robbers.  (Someone, I expect, would have cottoned to the titular scheme in the week it takes to pull off.)

But we needn't belabor its minor weaknesses, for it is a very good plan, and that's quite enough to make for a great heist film.  Indeed, it is one of the genre's rarest breeds—because here, everything actually goes right.  Russell truly does have a master's mind, the gang is loyal, and not a soul gets irrevocably hurt.  Just, please, ignore the traumatic stress; these are post-9/11 New Yawkers we're talking about here.  They're Giuliani-tough.

Maybe ignoring it is too lenient, though.  I've found that it does wear thinner today than it did in the days of my youth.  Yet Lee rarely fails to mute any response to all this emotional carnage.  Forget about it, as I am told New Yorkers say.  Instead, enjoy Lee's final, heartwarming generosity.  The closing credits sequence starts with making-of footage, and then gives virtually every last speaking member of the cast their own full-screen credit, from the highest to most low.  After all, nobody is low in Inside Man.

Least of all the guy shitting in the hole in the floor: because, for the record, his performance is the clear standout, even amidst this crowded field.  The most enduring mystery of Inside Man shall always be, "What happened to Clive Owen's stardom?"

But no matter.  Far, far more than the sum of its references, Inside Man is better than all of them.  I'd daresay it's better than anything you could fairly throw against it, for it is the heist film for all time.