The nerds of Albion, part II: Setting us up the bombe 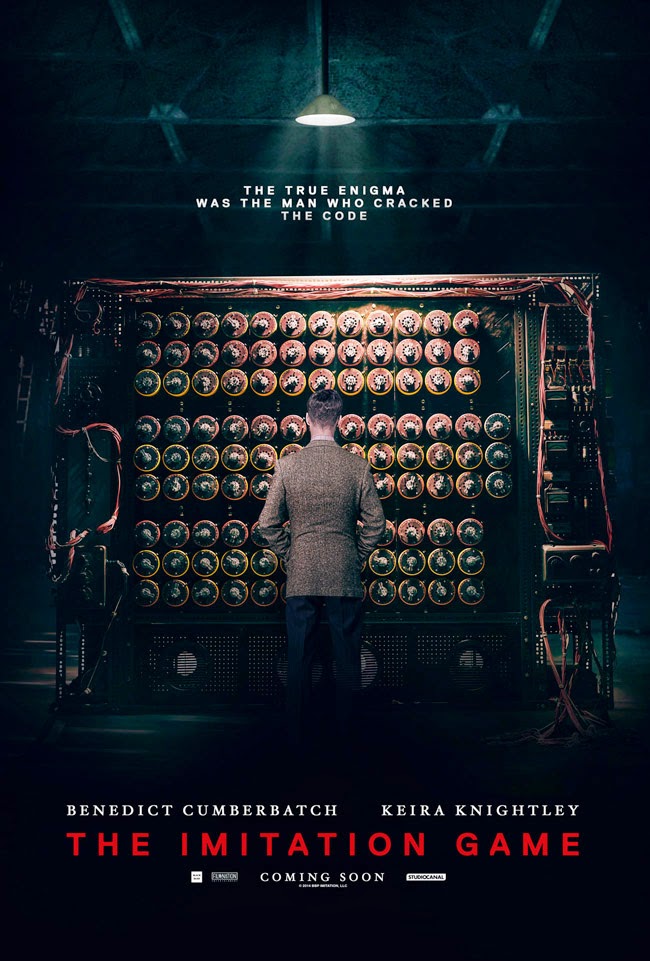 Spoiler alert: inapplicable, but let's say "high," if you didn't get a good education, like at Cambridge

The Imitation Game purports to be the story of Alan Turing.  Turing was the mathematical genius who first described the universal computer, a category of machines such as the one you're using to read this and such as the one I used to write it, as well as watch pornography.  Alan Turing was already the greatest man who ever lived, then, but he also helped win World War II by applying his peerless logical circuits to Enigma, the "unbreakable" German code.

There's a few other pieces of accuracy here and there—he was gay, he was briefly engaged to a woman, he was arrested and convicted for "gross indecency," and he could run really, really fast.  This is an exhaustive list of the true facts you will learn from this movie version of Turing's life.  The rest is largely wholesale invention, ranging from the innocuous and likely—the schoolboy crush he had on a tuberculosis case, his first and seemingly only love—to the tedious and predictable—the meddling authority figure who just doesn't understand all this newfangled technology—to the kind of seriously false and potentially defamatory—namely, the assistance extorted out of Turing by a Soviet spy.

Thus what we have here is an historical fiction, and a rather libertine one, at that—even in terms of mere plausibility.  Turing himself is heightened right up to the point of caricature, all for the purposes of drawing as much shallow humor as possible out of his strange, sometimes-difficult personality.  Cumberbatch, in half-unintentional half-parody of his own "forbidding genius" screen persona, seems to be playing up to autism more than suffering it.  (It's odd, then, that some of Turing's more giddily ridiculous real-life eccentricities—like his idiotic workaround for his broken bicycle or his penchant for literally chaining his coffee mug to a radiator, out of fear of theft—actually don't make it into the movie.)  He's given asshole lines and gives asshole reads of them, only occasionally suggesting that he doesn't understand other people, and far more often suggesting that he's insulting them right to their faces, knowing they probably won't do anything about it.  And they usually do not, because he is a war-winning superhuman.

This is a movie that treats the basic concepts of codebreaking as something Alan Turing personally invented.  It is likewise a film that takes its cues more from Star Trek than reality when it comes to the development of a staggeringly sophisticated device like Victory, the first British codebreaking "bombe," because as far as you will be able to tell from the film it was built from scratch, almost solely by a single pair of hands.  Meanwhile, the scene where scientists suddenly realize that frivolously using the information gleaned from their decryption efforts will simply alert the Germans to Enigma's compromise is the most preposterous sequence in a movie that hasn't once gone out of its way not to be.  Imitation is so resolutely committed to the frugality of its storytelling that, by the evidence of this film, only seven people did anything worth noting in the entire history of British cryptanalysis, and possibly all of World War II.

But here's my secret key: I take no issue with any of this at all.  In fact, it pleases me, for entertainment is the polestar of cinema, and the sober facts of Turing's significantly less conflict-prone wartime service can be readily found in books.

Whereas I complained about the thinly-veiled disinterest in Stephen Hawking's achievements in The Theory of Everything, Imitation nonetheless gets enough right to serve its fiction without evincing half the same shallow contempt for its subject's work.  When the science does come here, it's been thoroughly pre-chewed, but at least Imitation doesn't let us starve.  Turing's diligence, repurposed as flashes of divine brilliance for the needs of our procedural thriller in progress, is the very backbone of the film.  His personal life informs his work, not subtly, but neither with overwhelmingly obvious gestures.

Then the bastards just stop the show.

Alan Turing is a person who, yes, is "famous" in the sense that learned ladies and gentlemen such as might read this blog know his name and his work and his fate, but most people have never heard of him.  But Alan Turing, like Abe Lincoln, didn't die in bed, he perished unnaturally.  Lincoln, as you know, got his brains blown out—surely one of the most visually stimulating of all possible ends.  But Turing may beat him for style.  Turing's favorite movie was Snow White and the Seven Dwarves, and the coroner's report states he took his own life by way of a cyanide-laced apple.

Naturally, The Imitation Game kills this man, who died so strikingly, so dramatically, so cinematically... with a novel-length series of intertitles, such as may well still be rolling as I write this, and perhaps, like a Turing machine locked into a particularly NP-hard problem, will continue rolling until the very protons of the filmstock decay.  Personally, I left after the fifty-third block of text spawned upon the screen and I said "I am mortal, and to hell with this." 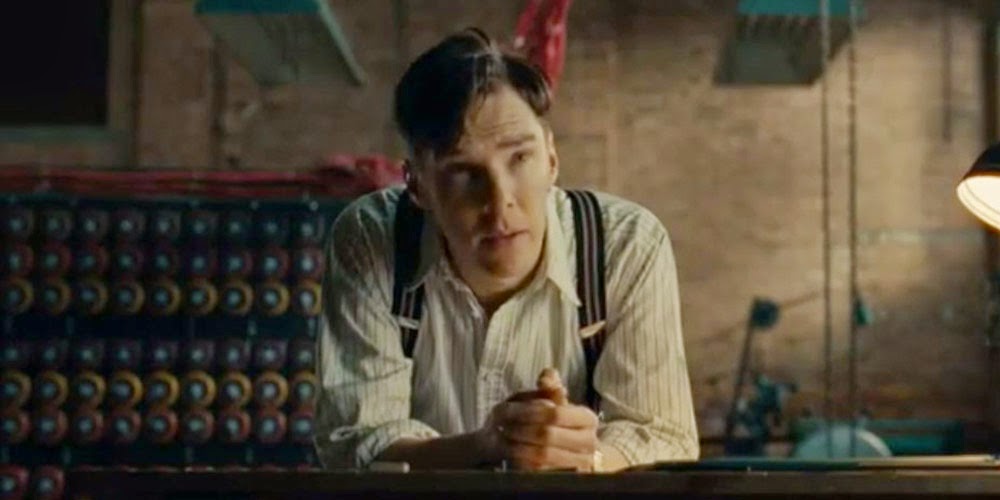 I hyperbolize, but only a little.  I did stay till the actual credits.

The alternative title to this review was "Benedict's encumbered batch," but that seemed too mean and too bleak, though at least it had the advantage over the film of understanding what it was about, and why it was about it in the first place.  But let's focus on the bizarre decisionmaking process of failing to dramatize this—perhaps out of some misplaced notion of "good taste"—for it says a lot about the film as a whole: Alan Turing wrote his own death with flourish, and nobody noticed because "flourish" isn't in Morten Tyldum's vocabulary.

Cinematically, The Imitation Game is pretty much a wash.  It's ever so tasteful and British: handsomely production designed with pleasant lighting.  And from end to end, it's almost uniformly rote work—never quite bad, and almost never interesting.  Let me correct myself: it is bad when the film's limited budget attempts to stretch itself on some profoundly misjudged CGI war dioramas on land, sea, and air.  These weird action interstitials still represent the director's most daring formal gambit; however, one gets the distinct impression that they represent not an artistic impulse, but merely the cold calculation that a WWII movie requires some explosions.  Now, the operation of the electromechanical computer itself ought to be enormously visually compelling—so, of course, its operation usually occurs out of focus in the middle distance, or offscreen entirely.  The disinterest is such that we never even get the seemingly obligatory editing equating our Cartoon Turing with his creation (that is left to the dialogue).  The only folks doing work that might be considered (in context, anyway) as "exciting" are those tasked with creating Imitation's soundscape; Alexandre Desplat's score does a credible job of matching form to function, whilst Andy Kennedy's legitimately great sound design tries very, very hard to let us imagine the workings of the bombe, in the absence of any particular visual presence.

But Imitation taught me that a movie can earn its existence with just one shot.  It's a simple shot, too, a long take of a character trying not to weep; and yet it binds the whole thing together.  Turing's sexuality is significantly less of his movie than it really should be.  As an adult, Turing has no relationships.  Cumberbatch's only opportunity to display Cartoon Turing's version of romance is, in fact, with a woman—though it is amusing, bittersweet and, thanks to Keira Knightley, it has the ring of truth to it as well, beyond what (surprisingly) turned out to be a fidelity to the facts.  (Impossibly, though, he never gets a boner for either Matthew Goode or Mark Strong.)  Meanwhile, the irony of Turing—who helped liberate death camps partly dedicated to exterminating people like him, was later tortured by the "free" government he served—is only present in the film because it's ineradicable.

Imitation spreads its scope wider than World War II in both directions, however.  Skipping about in time, this often-abused narrative trick functions beautifully, permitting us a crucial glimpse at Turing's formative years.  Thanks to the fine child performance by Alex Lawther as Turing's younger self, and thanks to Tyldum's uncharacteristic decision to use film language to actually do something with our emotions, the entire film is redeemed and everything, including Cumberbatch's performance, suddenly works.  It doesn't really help the deeply unsatisfying postscript of an ending—absolutely nothing could help that—but until then, Imitation is an eminently watchable and ultimately moving piece of historical fantasy.  If you just had to see one movie about a British mathematician last year, I hope it was this one.